I am not an avid air show shooter, one of those many, many fine photographers who capture the aircraft that ply the skies above fascinated fans. I enjoy a good air show, but I find I'm not really drawn to making photos of the planes in flight. So, if I'm not a great show shooter (I didn't say that; it's just not something I do a lot), what have I to offer?

Well, shooting different is my differentiating approach, so here are some samples to illustrate what I do and how you, too, might shoot the show different.

One way to bring some zing to an image of a flying airplane is to get it when it's low. Here, Skip Stewart's Prometheus is airborne, but not by much, and has just clipped some streamers strung between those poles with the black-and-white-checked flags. I was crossing a taxiway, obviously not near the action, but saw him making a run so I pivoted and shot. Bang — it's a good photo that shows both the energy and the environment of his performance (and the exposure before this one appeared in news coverage of the event). 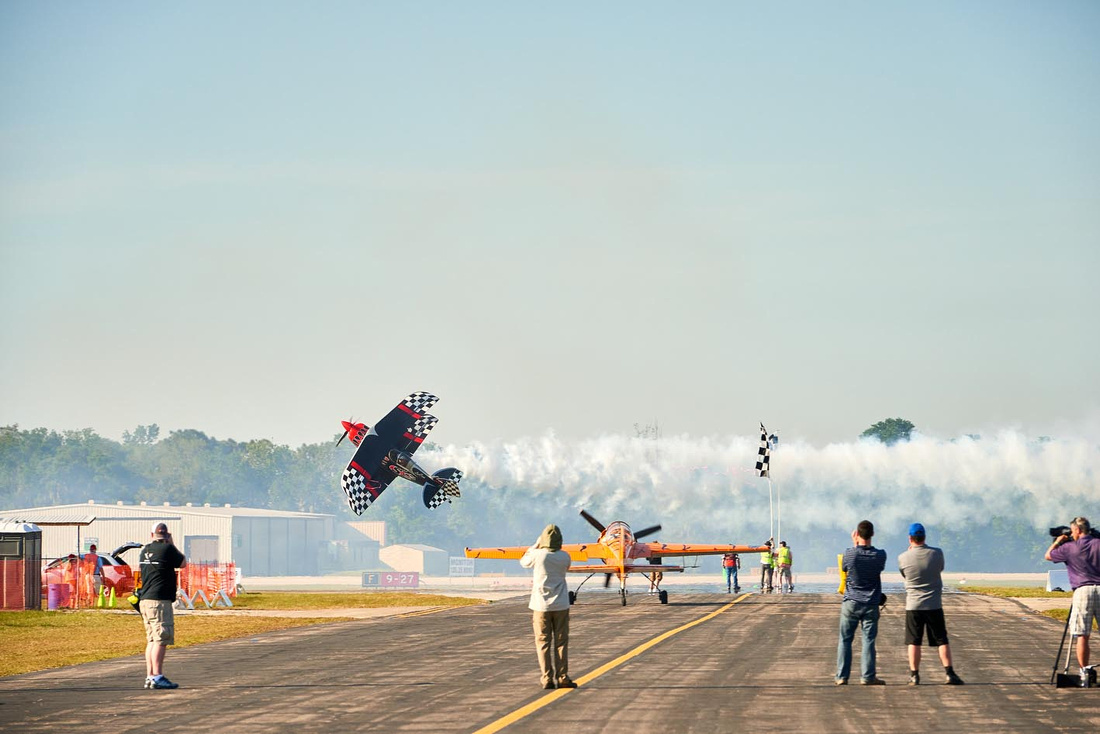 Here is more low-flying action, Margaret Stivers of Silver Wings Wingwalking, approaching show center and framed between P-51 Mustangs. Again, this puts the action in a place, not just against a blue sky or even a distant horizon. 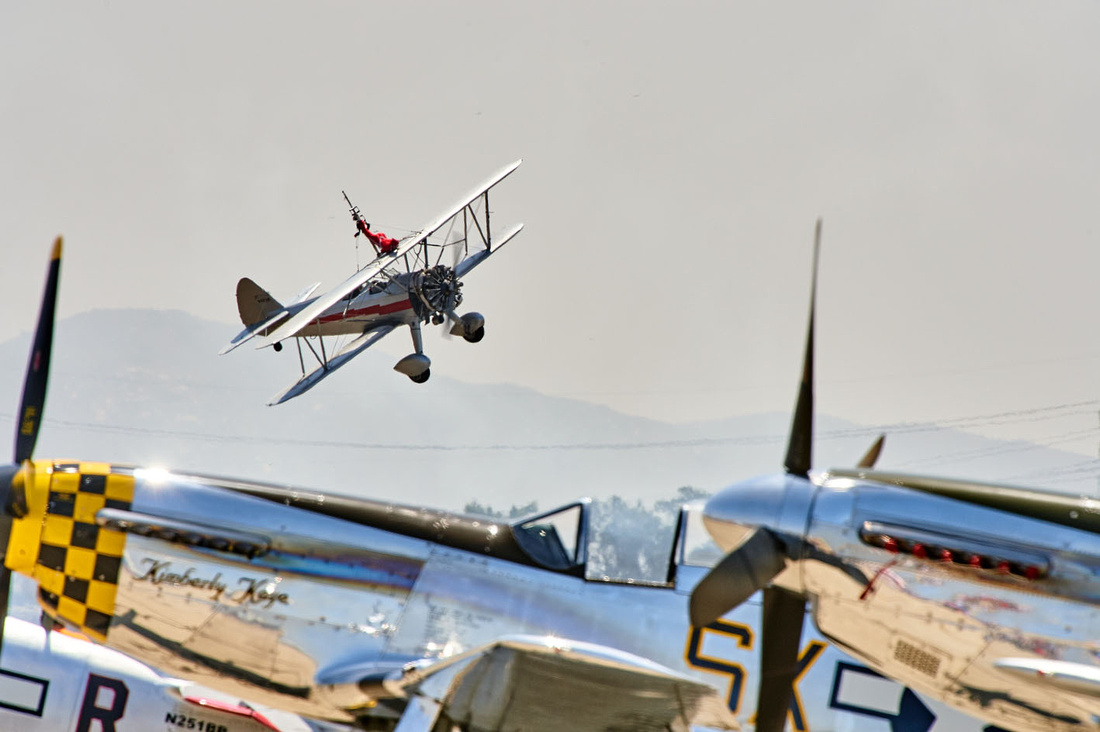 Another approach to less-usual, and thus more interesting, photography is to put something besides the airplane in focus. A guy in a hat holding a camera pointing, obviously, at the yellow airplane. We don't need the Northrop N-9MB in focus to know what the photographer is focusing on. There was only one of these iconic aircraft flying in the world and people who know airplanes know this one.* 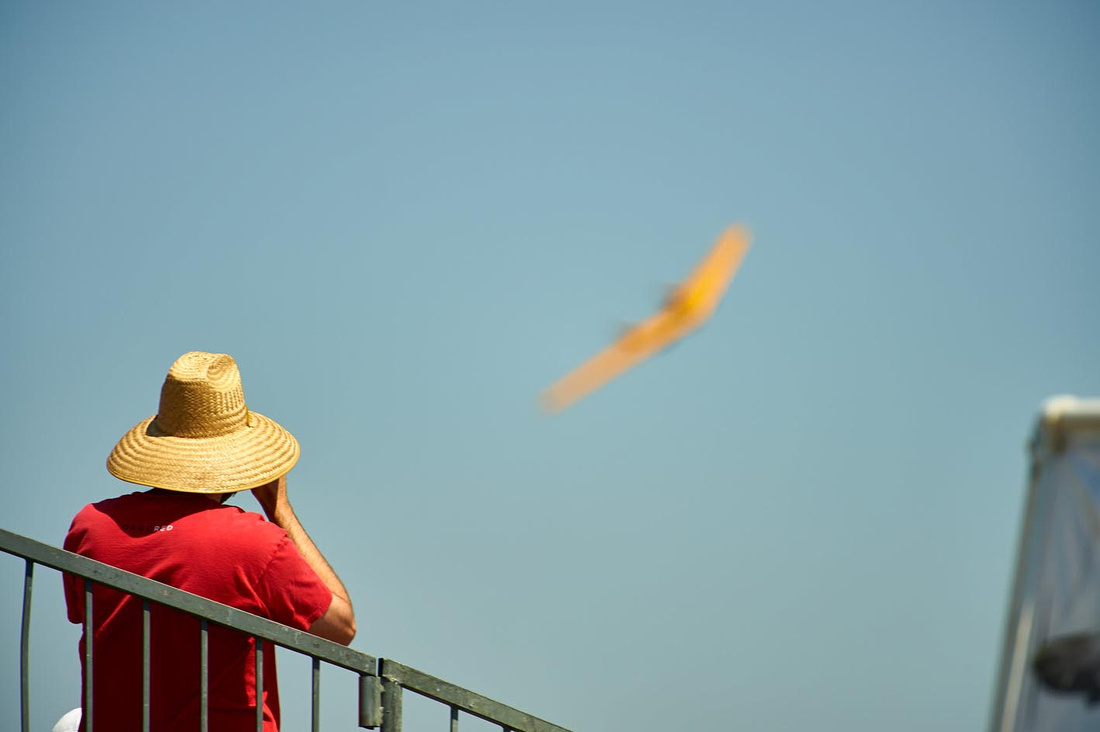 If you are going to make photos of the airplanes in the air, how can those photos look better than just photos of airplanes in the air? Perhaps more strongly than the above examples, it comes down to timing and composition. Take this diamond formation of the USAF Thunderbirds demonstration team. They are just about to pass over the crowd, but coming from behind the crowd. I knew they had circled around to behind, but were then hidden beyond the building just behind the crowd-holding bleachers on Nellis AFB. I was standing in the gap between building and bleachers, so I waited, which didn't take long, and as they flashed overhead I pointed and shot, creating a clean, formal portrait. By the time someone in the stands would have seen and shot, they would be getting a rear view — this is better. 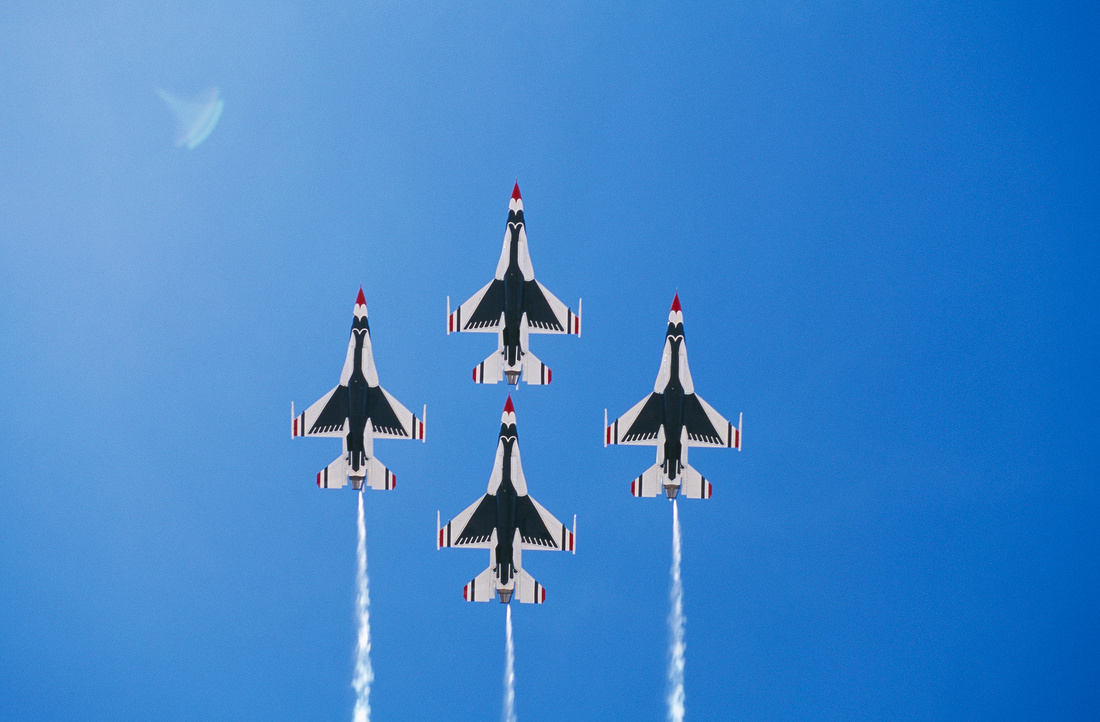 Or how about this one from the same day? Rather than put the Vipers smack dab in the middle of the frame, I kept some of the formality in the composition, by centering the group along the bottom, while also giving them space above to fly into. This is one of my all-time favorite photos of the Thunderbirds. 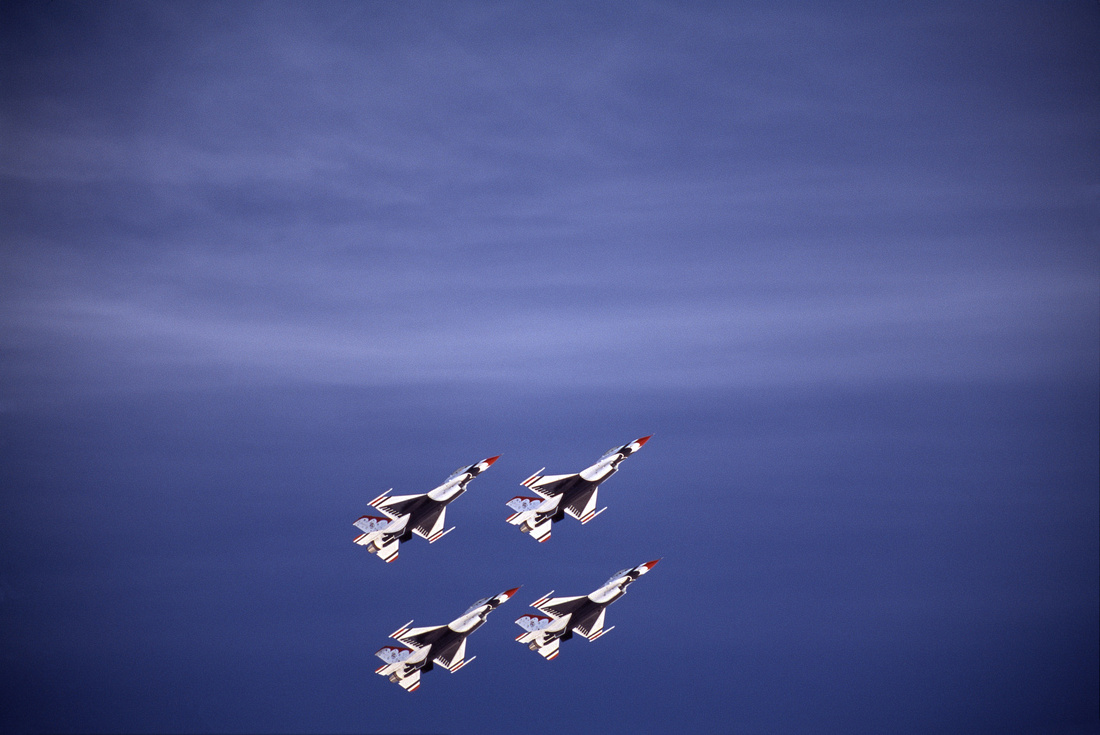 If an aircraft shows its top, rather than just its side and bottom, shoot for that! Most air shows' flight paths runs from one side to the other, left-to-right or right-to-left, thus the dynamics of flight usually present just the side or bottom of the subject. Those can be nice, but seeing the upper surfaces is usually more satisfying, so be sure to fire away if they come in banked or rolling or whatever. The image, below, of a rare Temco TT-1 Pinto, was made in a pretty small window of time. In the course of 14 minutes from its arrival on the scene, airborne, until it landed, the pilot showed its topside for fewer than 5 seconds! 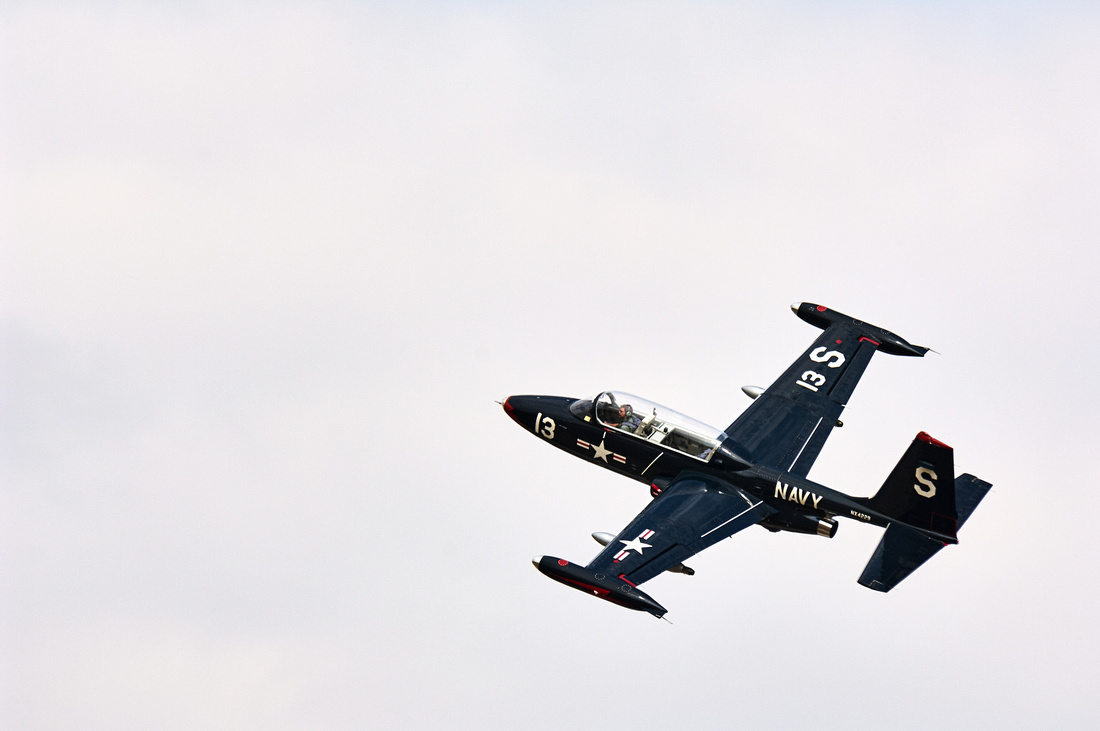 One technique that might not be available to you, or it might, depending on your connections and savvy, is to position yourself where others haven't or can't. This B-17G is just lifting off the runway and there I was, at the end of the runway, firing off just a few frames before it roared overhead and banked away. Head-on shots can be quite dramatic and, especially in the case of propellor-driven aircraft, a balancing act regarding the shutter speed to adequately capture the airframe crisply while allowing sufficient prop blur. In this frame, the shutter speed of 1/400 second made a pretty good compromise. (If you're shooting jets, you can probably crank that speed to as fast as your camera will allow, unless you've got some intentional blurring in mind — which can be a good thing.) 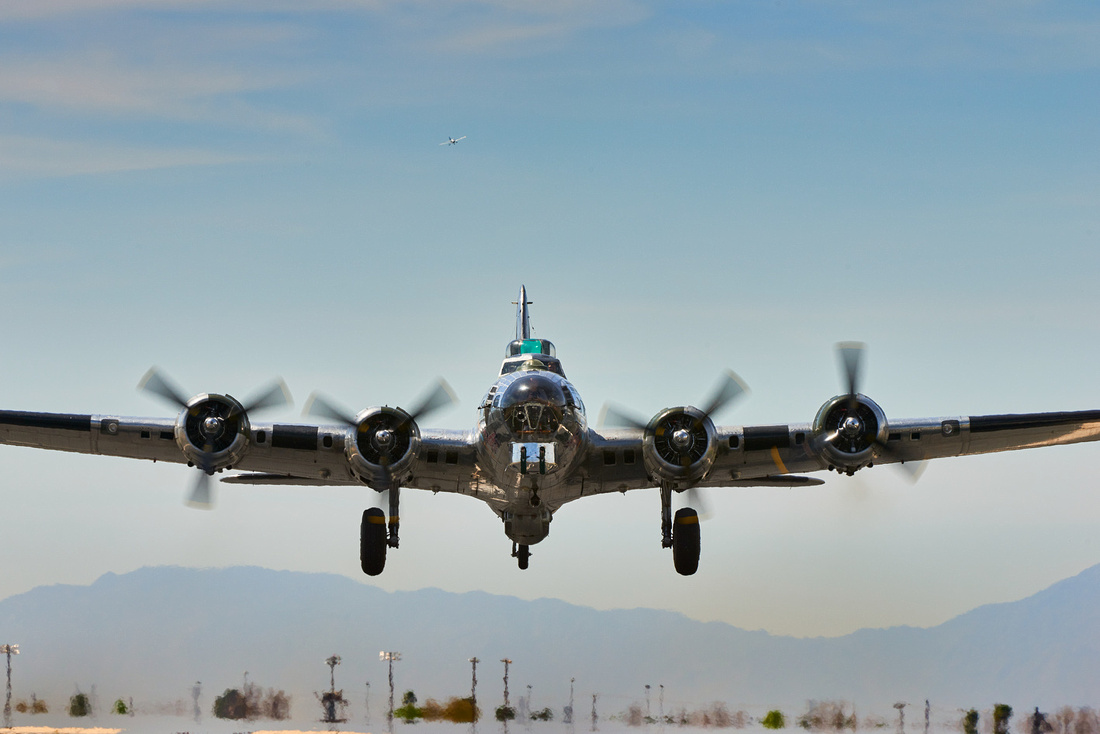 Air shows are full of photographic opportunities. Although you don't have to spend every moment taking photos — you can also stop and smell the cotton candy, hot dogs, and lemonade (okay, and the porta-potties) — when you do decide to capture some memories or make some art, here's some advice: plan for what might happen, keep your eyes open for possibilities, and act quickly when something interesting appears in your viewfinder.

(*Sadly, the N-9MB was destroyed in a crash just two months ago (at the time of this writing, mid-June 2019), fatally injuring the pilot, David Vopat.)