he·ro | noun : A person who is admired or idealized for courage, outstanding achievements, or noble qualities.

That definition explains why we look at a hero in a certain way, and that way is up. We put them on a pedestal, at least metaphorically, so we necessarily (if not literally) look up at our heroes.

And that explanation explains the composition we have developed for portraying a person in a heroic manner. A composition that’s called “the hero shot.”

A simple description of such a composition calls for locating the camera below the person and pointing it up at them. 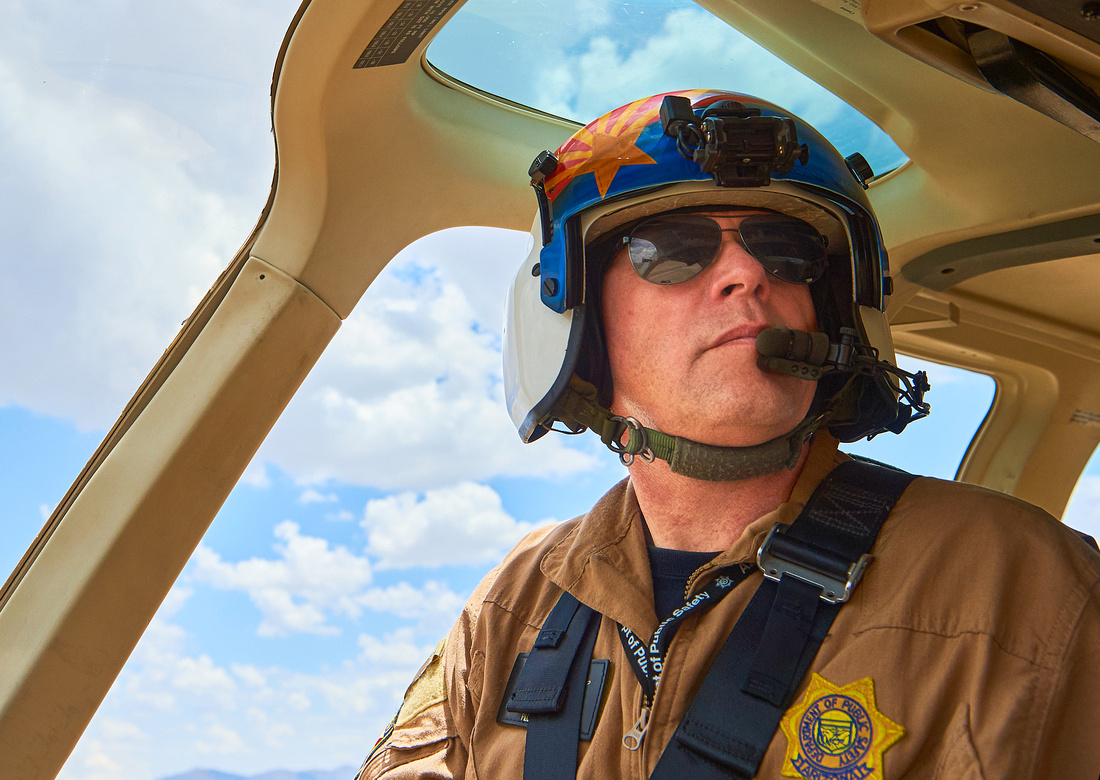 Hunter French, chief helicopter pilot with the Arizona Department of Public Safety, was flying to refuel during search-and-rescue training near Tucson when I captured this, an exemplar of the intended result: an image that communicates reverence. Camera low, looking up, easy peasy! 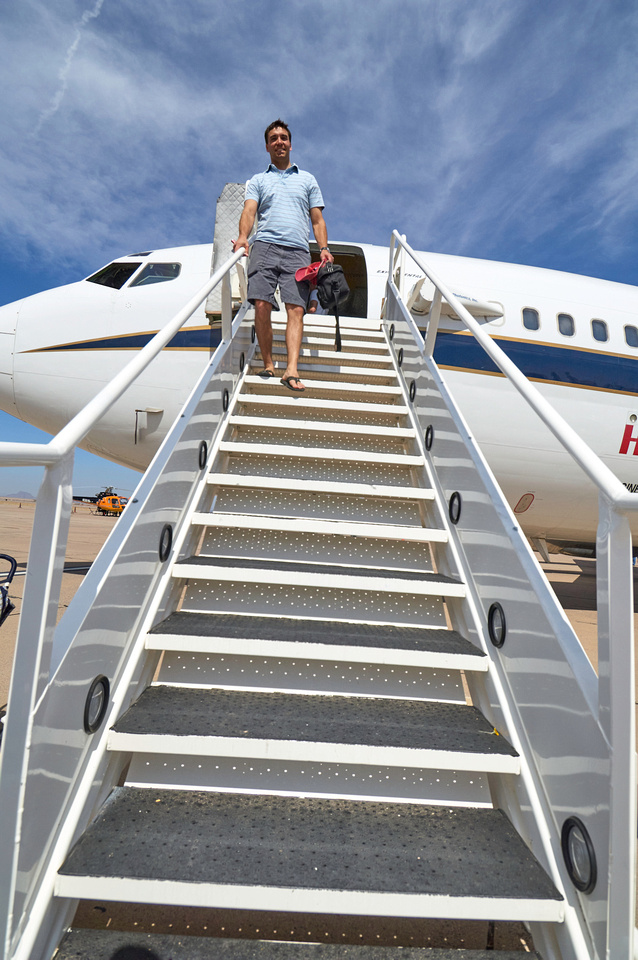 Well, we're looking up, but in addition to the man's expression being non-heroic smiling, the wide-angle lens combined with the distance from the man reveals too much else going on, visually — lots of stairs, an orange helicopter in the background, the handles of a stroller(?), all of which draw attention away from the subject. (I do not know this man, as he was merely one of the hundreds of attendees at an airport open house I'd been engaged to cover.)

Here I'm, again, using wide-angle lens, but much closer to our hero. The camera is pointed toward the horizon, rather than up at our subject, but the resultant view is up-looking in regards to his face. However, because Bristow SAR OPS crewmember Chuck Holcome is leaning back, away from the camera, the difference in distance from the camera to his feet, compared to the distance from the camera to his face, optically stretches his legs and, likewise his feet, to appear comically long. Plus, his mischievous expression skews our feelings toward comradeship; he might be our buddy but not necessarily our hero. 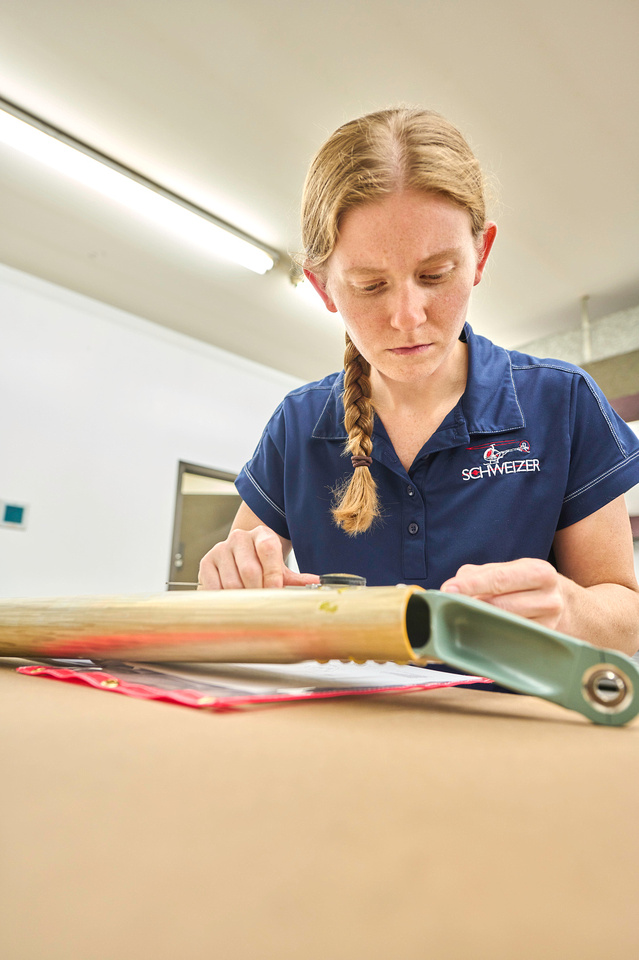 The camera is low, and again not technically pointing up, but the lens is wide-angle enough to capture, heroically, Ms. Nichols, a Schweizer employee inspecting components. Surely, inspecting parts so they fit and function is a heroic action. And yet, there's something about this image that doesn't really communicate that lofty ideal. It's a very good photo, but I think because she is looking down, concentrating on her task, it feels more intimate than heroic.

So, what needs to change? The wide-angle lens is not actually the root of the problems in the above images, but let's switch to a "longer" lens and see what we get. 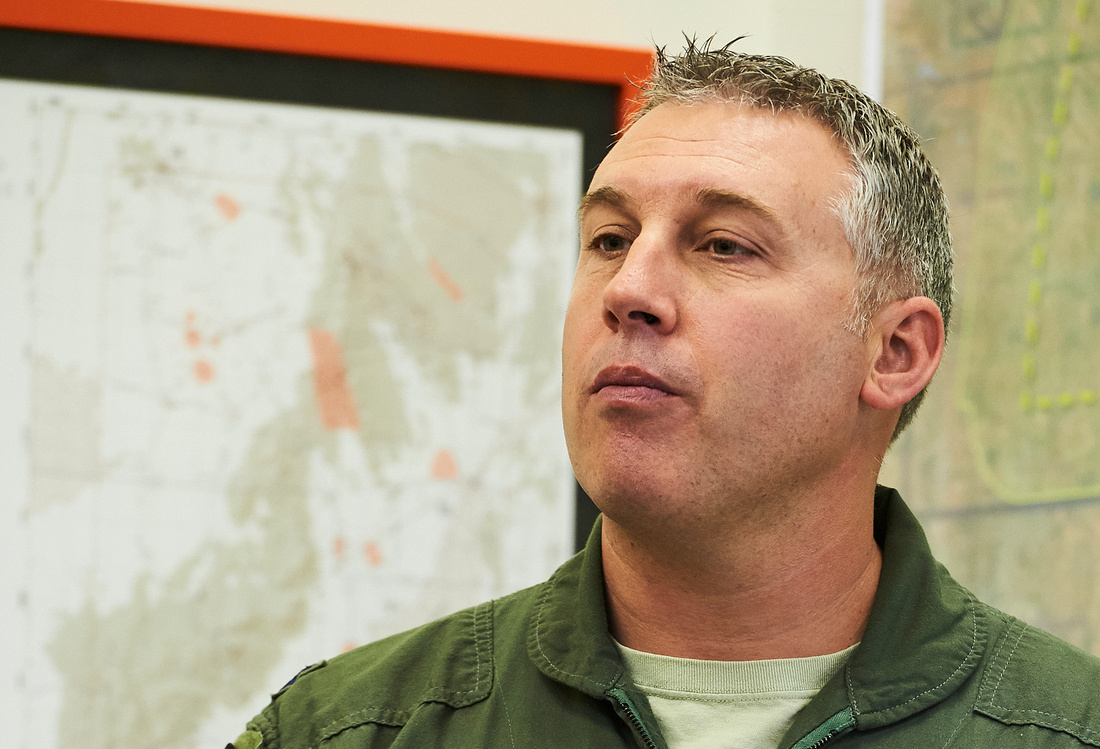 USAF Colonel "Elvis" King is briefing members of the media in advance of the Air Force retiring the F-4 Phantom II from its service. I'm seated and using a "long" lens, looking up at him, so the angle is right. But since he is listening to a question from another seated member of the media, his gaze is a bit lowered — looking out at the horizon would be better. 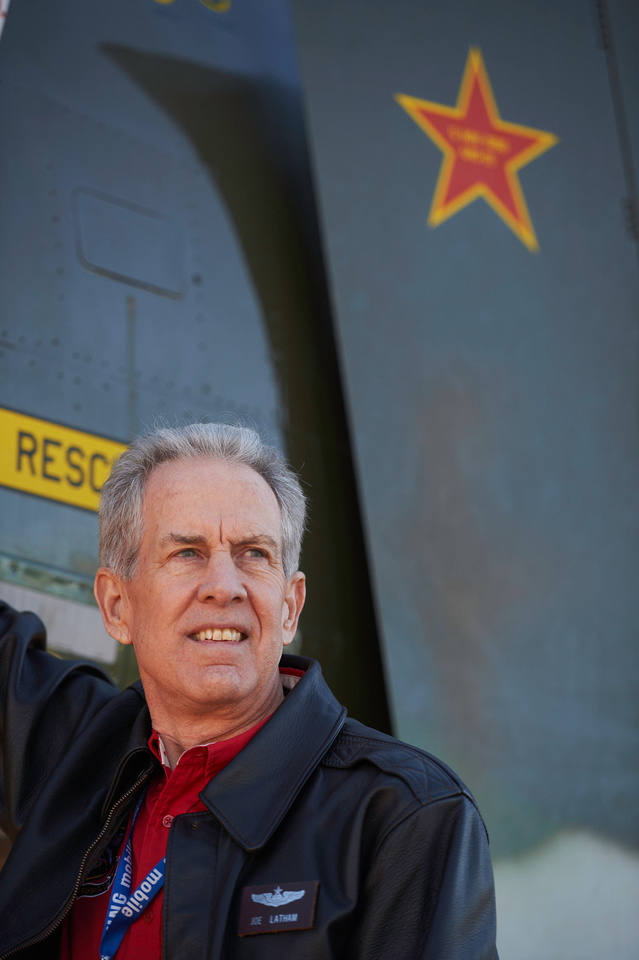 Another USAF Colonel, Joe Latham, coincidentally at the same Air Force Base (Holloman) but four years earlier. Colonel Latham is standing next to an F-4, in the base's Heritage Park, that is painted to represent the one he flew in Vietnam, that star on the intake splitter explaining why the aircraft is so memorialized.

I got low and pointed my camera up, then backed away so the star would also be in frame, and he is gazing at the horizon — a good photo of a good man.* 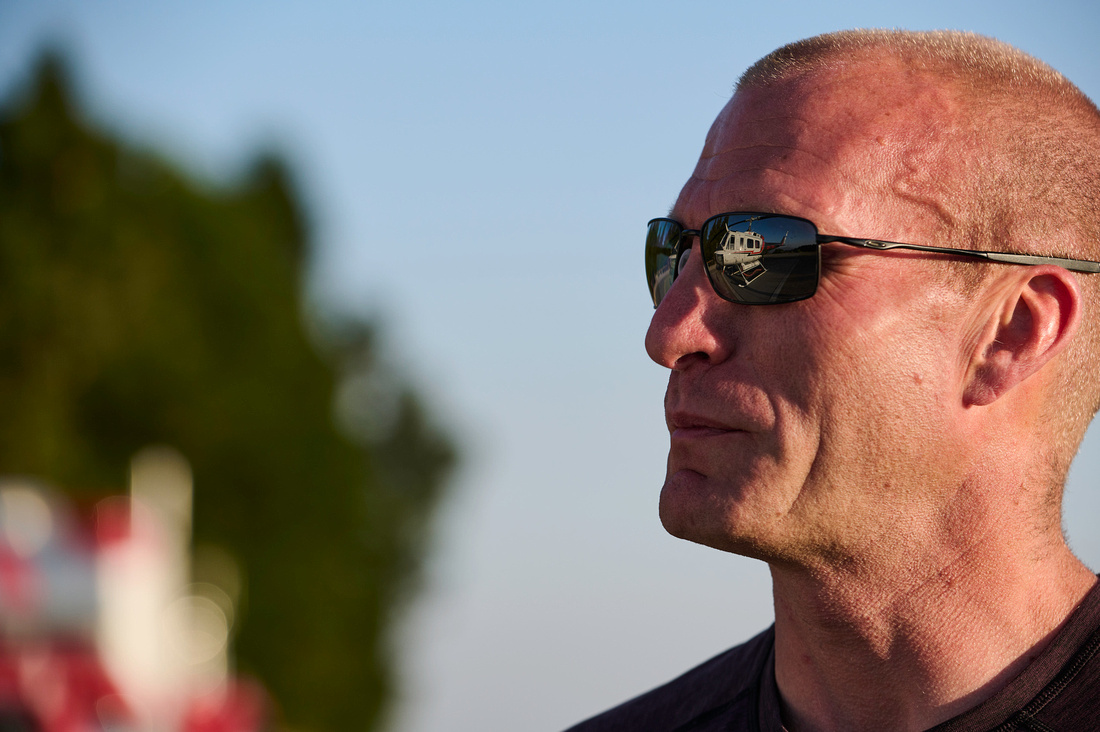 Pilot Greg Heuchert gazes at the Bell 205 he landed 20 minutes prior to this photo. For the Colonel Latham photo I was using a somewhat long lens, so moved back to include important details. Here, with a lens of nearly the same focal length, I moved in closer for a more compact and forceful portrait.

People are not the only subjects worthy of the hero treatment, photographically at least. 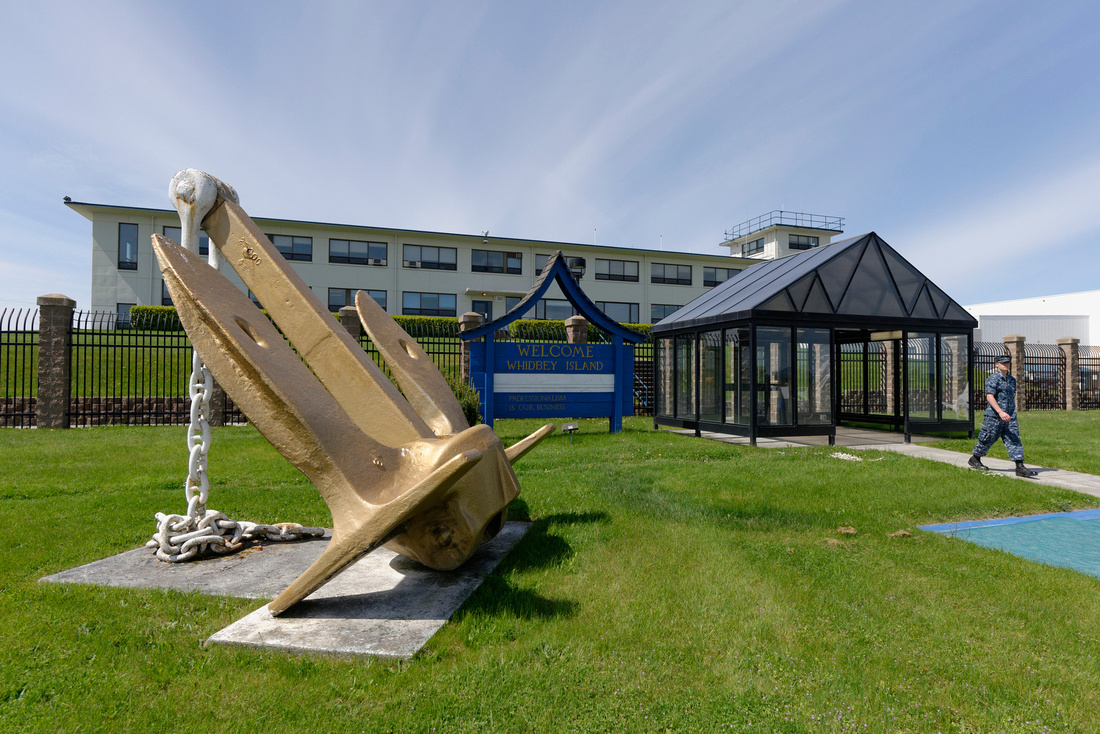 This view of NAS Whidbey Island's headquarters works as a hero shot because the HQ is elevated above the flight line, where I'm standing. Including the anchor adds strength and a bit of grandeur — not bad for a big hunk of iron painted gold. (Note: the photo is from 2013, which explains the no-longer-authorized uniform on the sailor.) 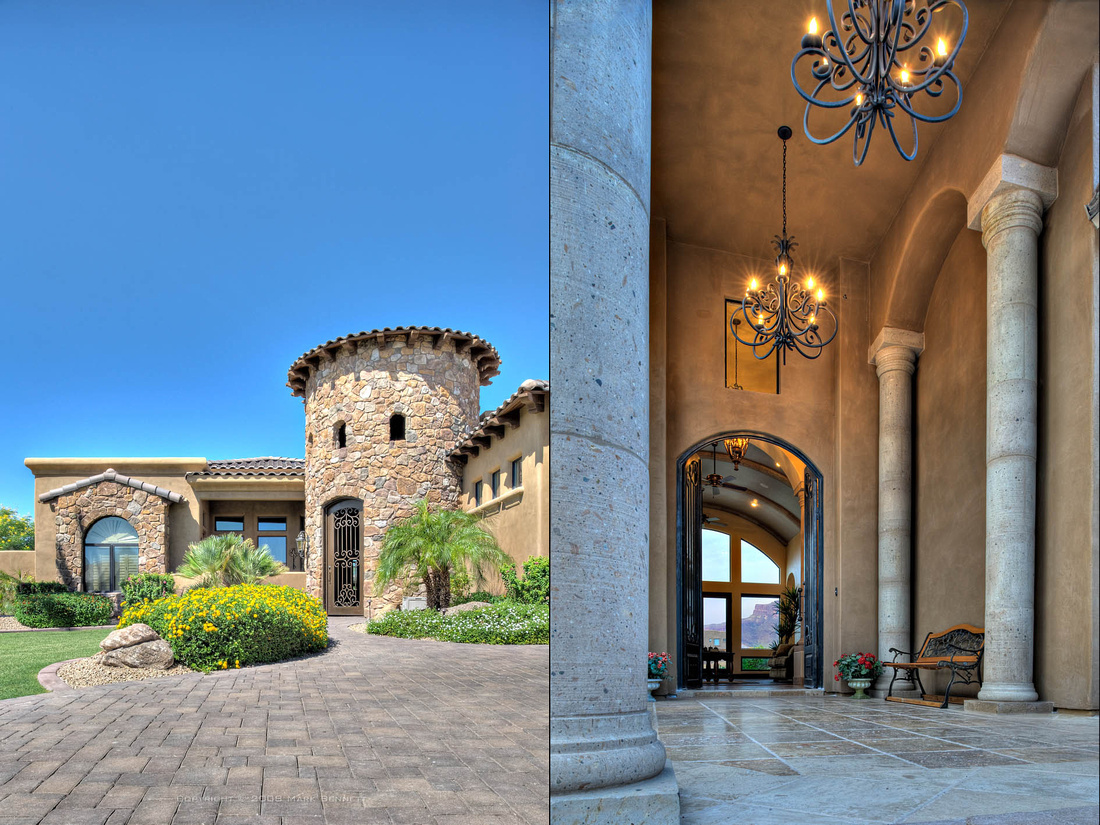 These are not aviation images, but show the basic technique — looking up at the structure. In each case I put the camera low, almost to the ground, in order to look more "up" at the structures. If I'd put the camera at a standing eye level, the viewer would inherently understand that positioning, and nothing beyond "beautiful" would be conveyed. By going low, these imply a greater reverence is due (whether that's true or not).

But be careful to maintain the vertical elements of the structures as vertical in the image. 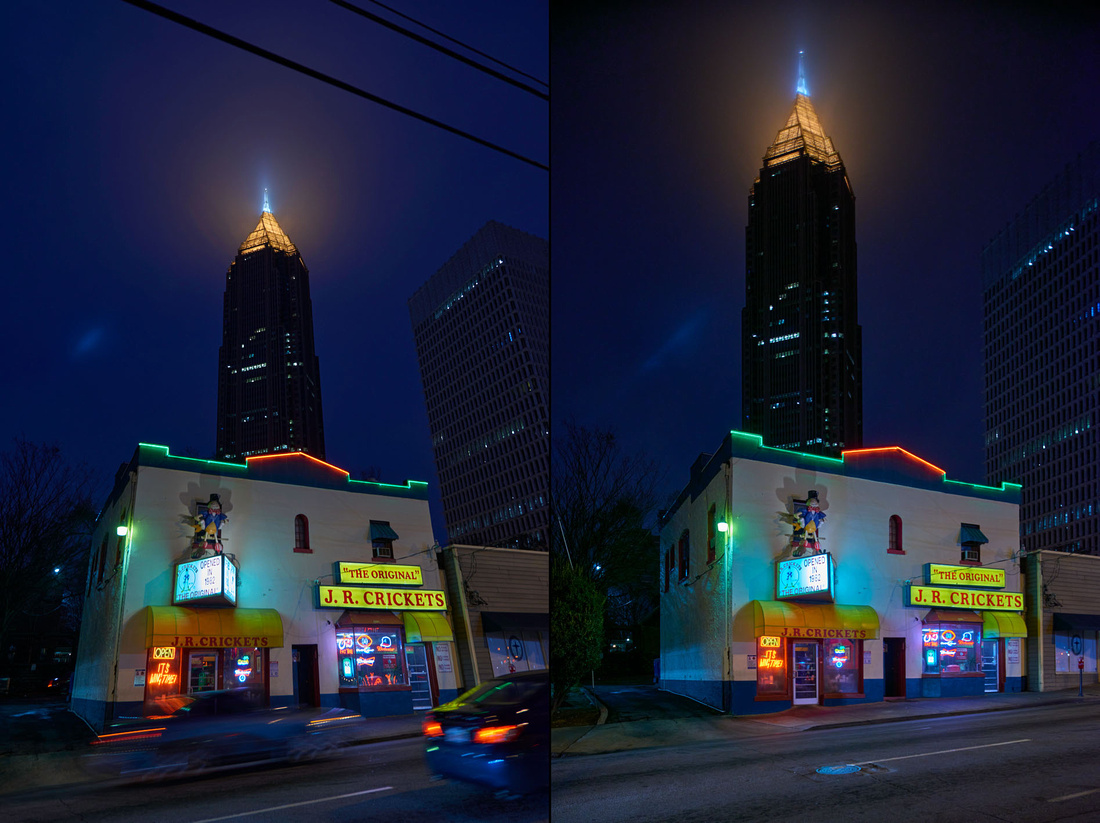 In this pair of images of the IBM building in Atlanta, fronted by "The Original" J.R. Crickets, I didn't need to put the camera near the ground in order to have the buildings tower over the viewer. On the left, however, using a normal wide-angle lens required me to point the camera above the horizon to capture all the height, with the result being the edges of the buildings optically converging toward the vertical center of the image. That convergence robs the image of heroicism, as it distorts rather than exalts their shape and stature.

So I switched to a special wide-angle lens, one that can shift its optical elements, to create the image on the right. The camera body is actually level, as if pointing directly at the horizon, but the lens is shifted up at the buildings, projecting the vertical edges of the buildings vertically onto the camera sensor. The result obviously looks different, but it also feels different.

I used the same, special, lens for the two "home" photos, but not to capture the Whidbey Island HQ — the verticals are vertical in that image because the building wasn't so tall that I had to tilt the camera up at it.

The point is, the basic approach to a hero shot can be applied to architecture, but it can go awry if you're not careful with optical convergence. 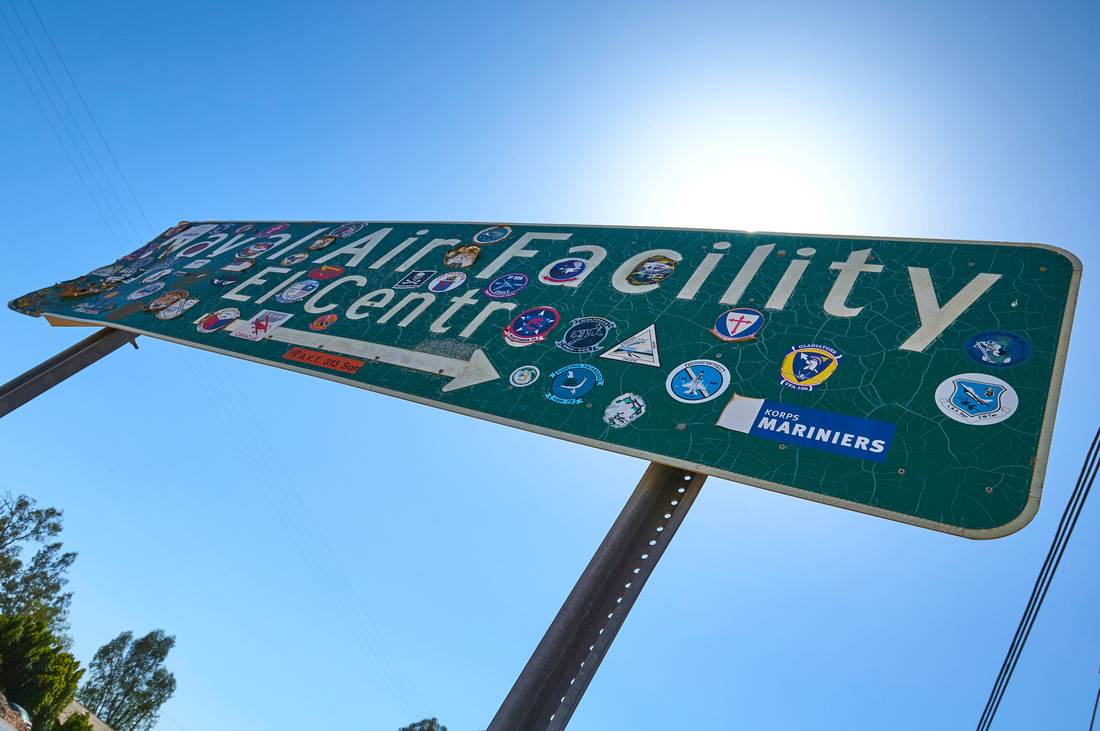 Or, if convergence is okey-dokey, a hero shot can be made of a simple, multi-stickered, sign! It's all good (and it brought us back to aviation, so, win-win!).

Sliding in between people and buildings are vehicles that take to the air. Get low, point up, and heroism awaits. 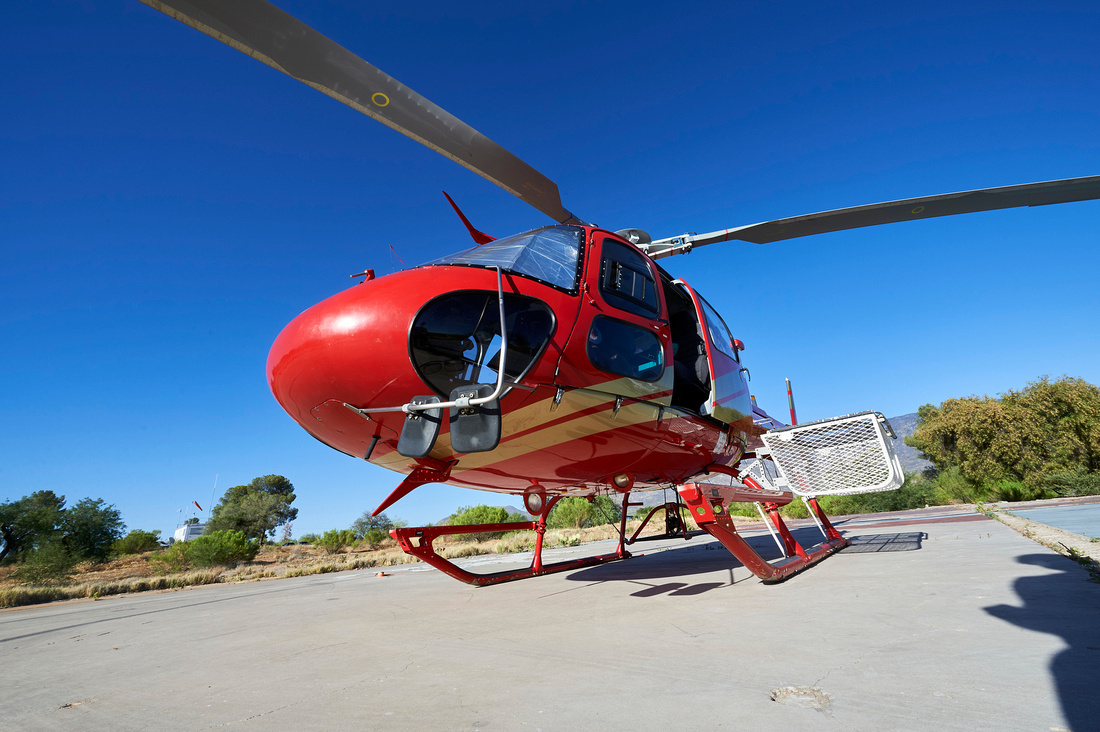 Except, not always. This Papillon Helicopters AS350 B3 posed for my camera, but the result is not so much heroic as almost comical. It could be the Dutch angle (where I've tilted the horizon) or the exaggerated nose caused by using a wide-angle lens so close to the aircraft. It's a potentially useful image, since heroism is not the only characteristic needed in communications, but let's try something else. 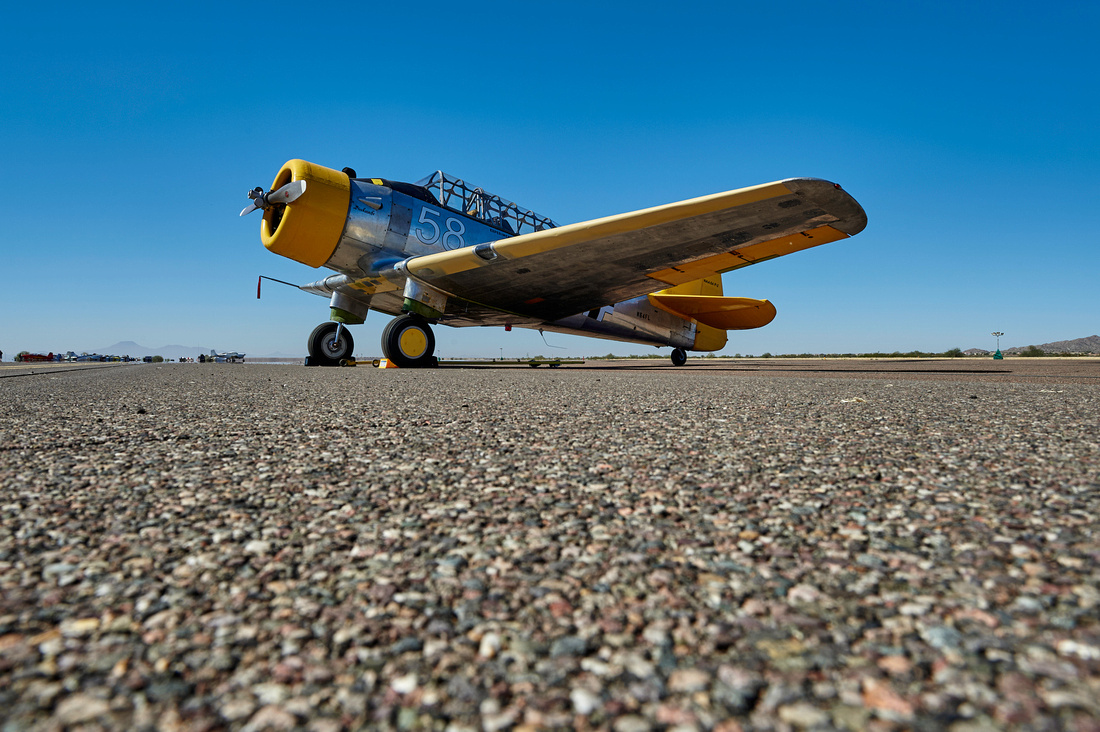 A level horizon and a greater distance from the aircraft, here an NA-64, solve those problems. Let's crop out some of the background, since I don't need it for this article (though it might be used for text or graphics in a brochure, etc.) … 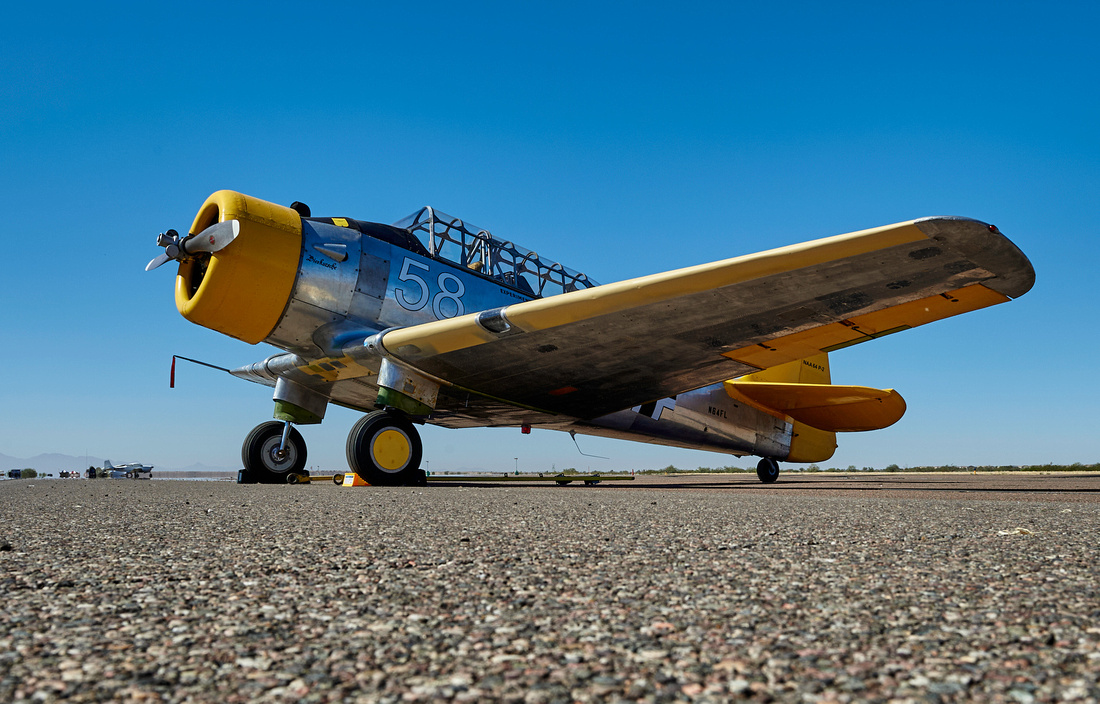 … and here you go! A solid hero shot of a static subject. 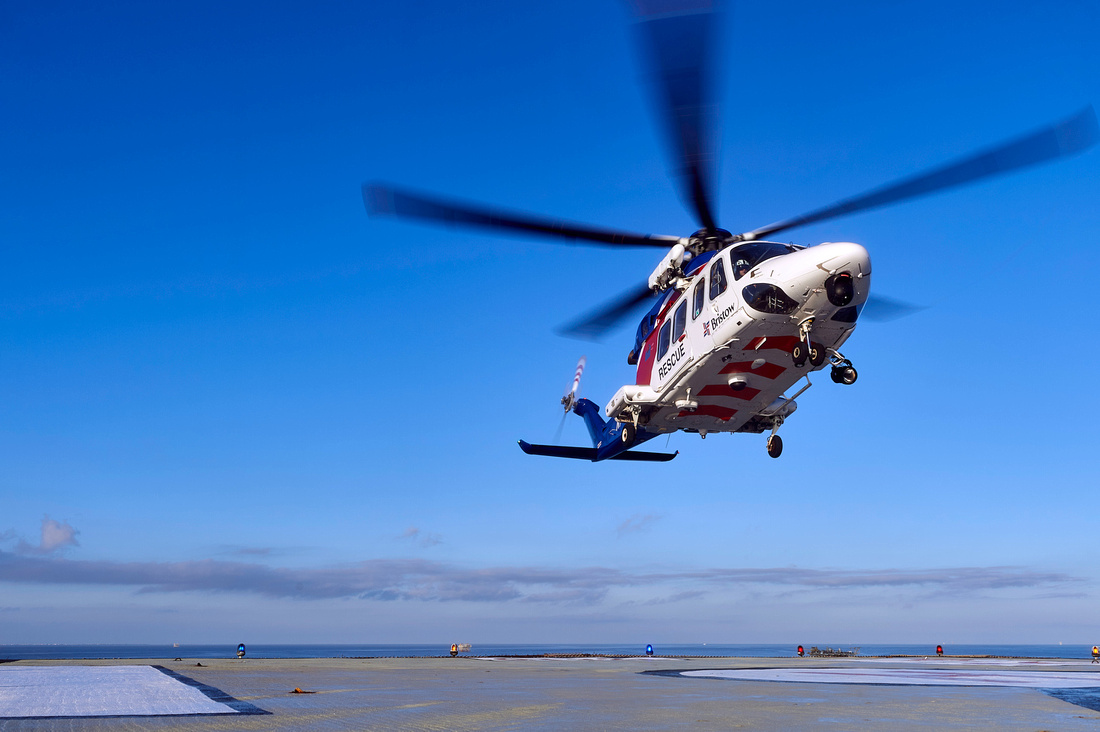 Subject in the air? Sure.

I'm crouched in a descending stairway on this offshore platform in the Gulf of Mexico, which would have me pointing at least a little bit up at this Bristow AW139, but the aircraft's attitude on arrival adds even more punch to the composition. 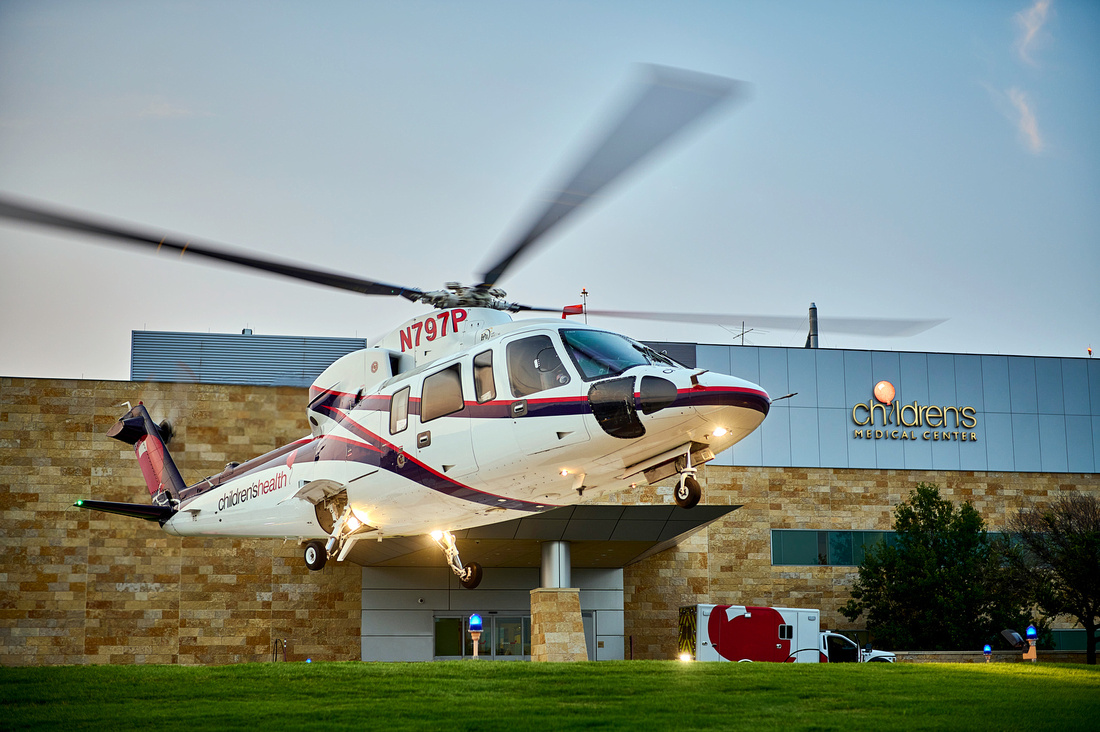 This Children's Health Dallas Sikorsky S-76 is departing, but the result is the same — we're looking up and the aircraft is looking good. (Another image from this photo shoot appeared as the Last Look feature in the December 2021 issue of ROTOR magazine (www.rotormedia.com).) 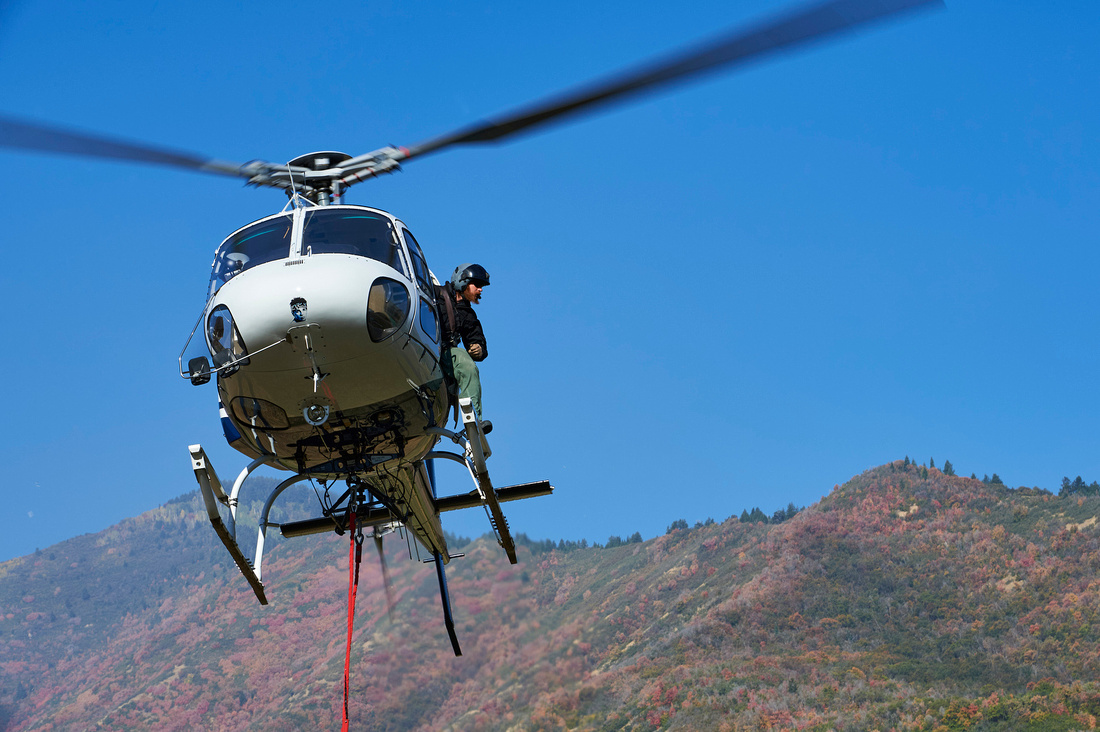 Krassel Helitack was conducting HEC training with this AStar near a wildland fire in Utah. The angle is good on the aircraft, and we have a bit of unintentionally heroic posing by a crew member. 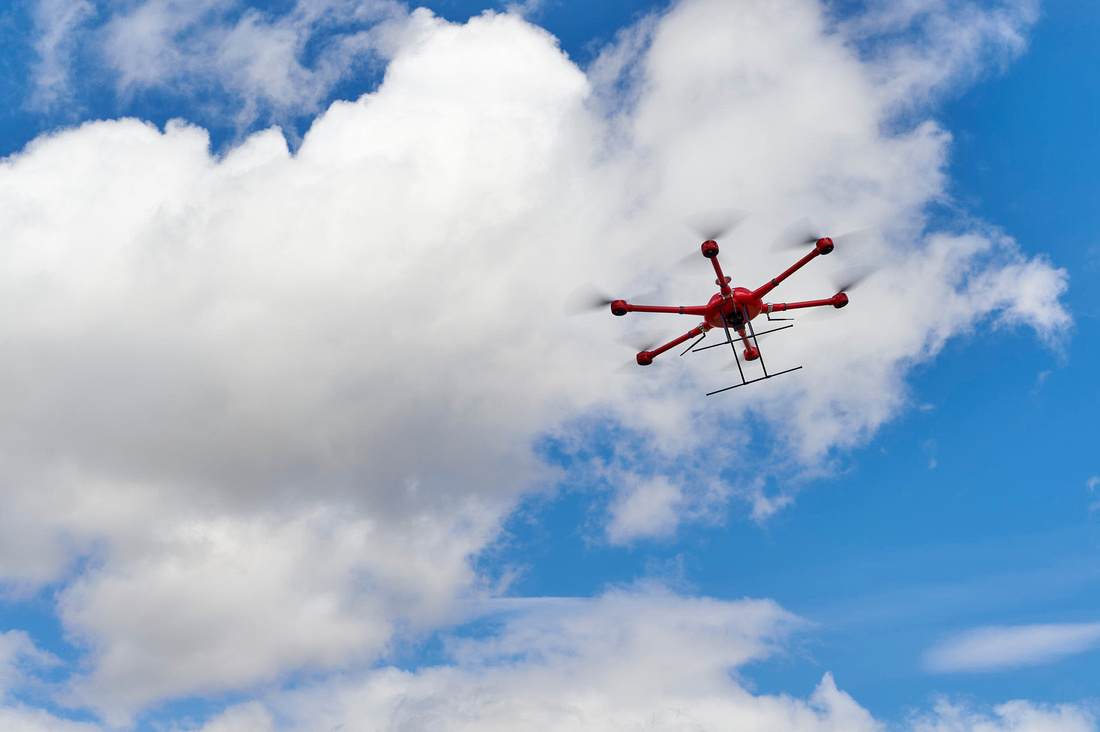 I even managed it with an MMC A6 drone outside Reno, Nevada. Not all of my shots looking up at the craft work heroically, but this example shows it can be done, relying on both pitch and roll to impart the characteristic qualities we're looking for. 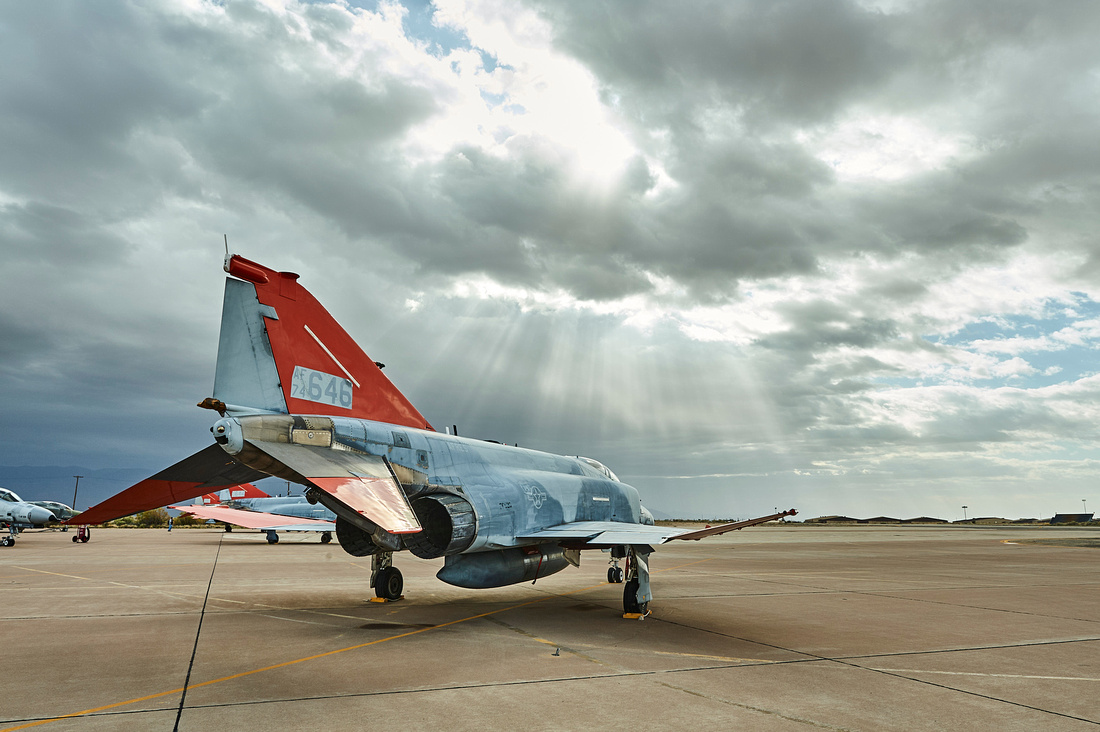 Here's a hero shot that runs a bit counter to any of the others — we're viewing this F-4 Phantom II from the rear! This composition might not have worked, save for the sunbeams bestowing their blessings, visually at least, on our aging warbird. The point here is, if you can break the "rules" and make a hero out of the subject, break away! 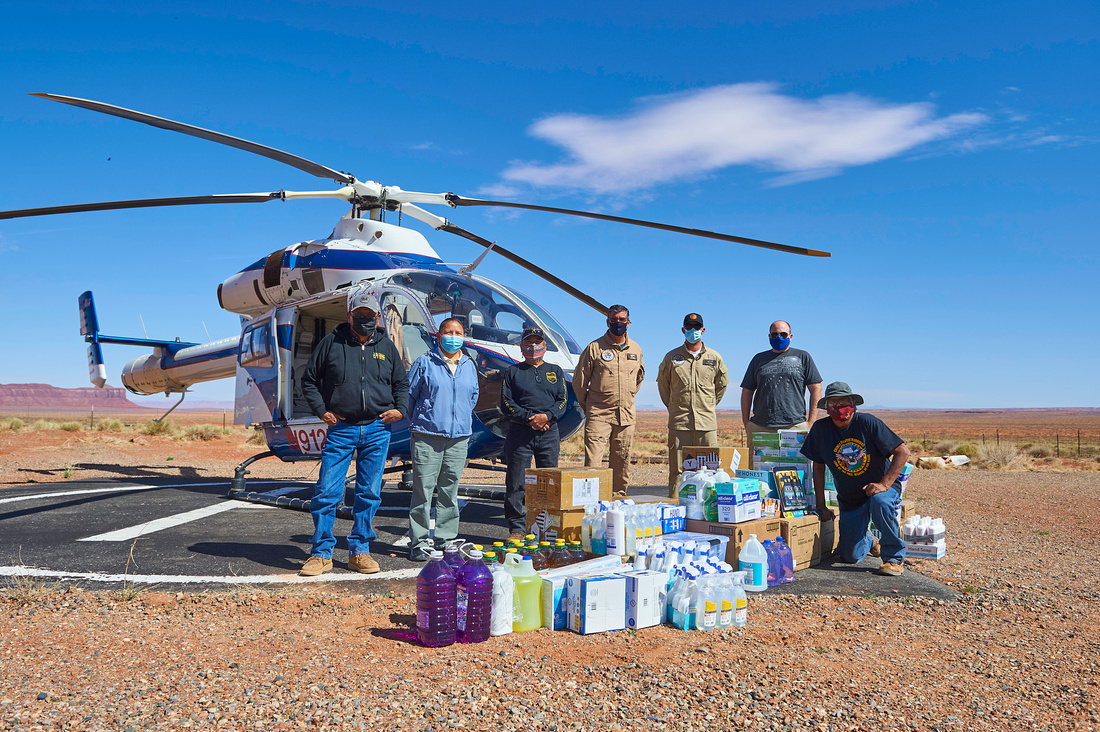 I'll wrap up with some true heroes — a project to help the Navajo Nation fight and recover from the COVID-19 pandemic. For more than a year, a helicopter, manned and paid for by its manufacturer, MD Helicopters, delivered cleaning supplies and PPE that were donated by the non-profit Native American Sustainability for Veterans and Those In Uniform, which were distributed across the reservation by volunteer members of the community. This image is from Monument Valley Airport where, as with every such delivery, the supplies were photographed in front of the people and aircraft, before being loaded into trucks and SUVs for distribution to those in need.

That's a lot of good being done, so I, naturally, kneeled to raise the people and the aircraft in the view and, deservedly, in our estimation.

(NOTE: MD Helicopters was recognized with the Helicopter Association International Salute to Excellence Humanitarian Service Award for their efforts.)

The need for hero shot comes up occasionally and you should be familiar with it, whether you're behind the camera or behind directing a photographer (or videographer) to create it. It's not as easy as it might seem at first, but the above dos and don'ts will set you on the path to, at least, understand how to communicate the respect due the subject.

* I spent time with Colonel Latham just a few years ago and, among other topics, we spoke of our experiences with the F-4. His experiences were in the front seat, mine were as the son of a Phantom pilot. When I was 10 to 12 years old my dad was stationed at Shaw AFB in South Carolina, and twice during our time there we attended an event called Brass Strike at Pope AFB/Fort Bragg in North Carolina. The complete experience is worth its own retelling, but I'll just recount that the finale to the live fire demonstration was a Phantom rocketing over the grandstands, approaching from behind those grandstands, 150 feet above the spectators at Mach 1.1. The Phantom would suddenly appear out in front, afterburners blazing, and only then would the sonic boom reach your ears. Talk about exciting, right?!? Guess who was piloting that supersonic Phantom? None other than Joe Latham. So, we may not have been introduced until 2011, but we had somewhat met 42 years earlier.