When you, as photographer, are planted on the ground while your quarry is in the air, one of the most dynamic images you can make is from directly below. Not from off to the side and below, but about as smack dab directly below as can be arranged, given the craft, its speed, and perhaps its mission. It can be surprisingly difficult to make a good image looking straight up, but there are applications where these compositions come into their own.

I've written about photographing from the ground, which almost always involves capturing a portion of the underside of an aircraft. There are ways of composing to add interest and tell the story. Photographing from the ground to show only the underside can be both more difficult and result in images that are less versatile. However, such images can also be very powerful.

Corporate jet coming out of McCarran

Looking literally up at an airplane or helicopter suggests a figurative appreciation for the same. There it is, defying gravity, winging its way to somewhere else, doing what can't be done down here on the ground, in the mud, on this tarmac, or relaxing on the beach with a rum in your hand. It may not be on a pedestal, but it is on high.

These images also tend toward graphical boldness. An aeronautic form framed against the dome of heaven, a stark shape against a background that might be solid or dappled, but seldom (never?) with details to rival the craft.

A lovely photo of a Piaggio P-180, an unusual airplane that, from this angle, is a bit cluttered with those manifold flight surfaces (I count 9).

Imaging it from below, though, cleans up that impression by presenting 8 of those surfaces as matching pairs, mirror images of each other, and the 9th (the vertical stabilizer) not really sticking out, visually. The very plain, though vibrant, blue sky remains the same, but it feels more like a ho-hum nothing in the side view, and a visually important background, graphically, in the bottom-up view

An upside to looking up is simplifying shapes.

Another potential benefit might be not identifying the owner or operator of the aircraft. In the upper P-180 photo, the N-number and, perhaps, the swash graphic on the vertical stabilizer, point to the then-current owner/operator. In the lower photo, those identifiers are not visible. 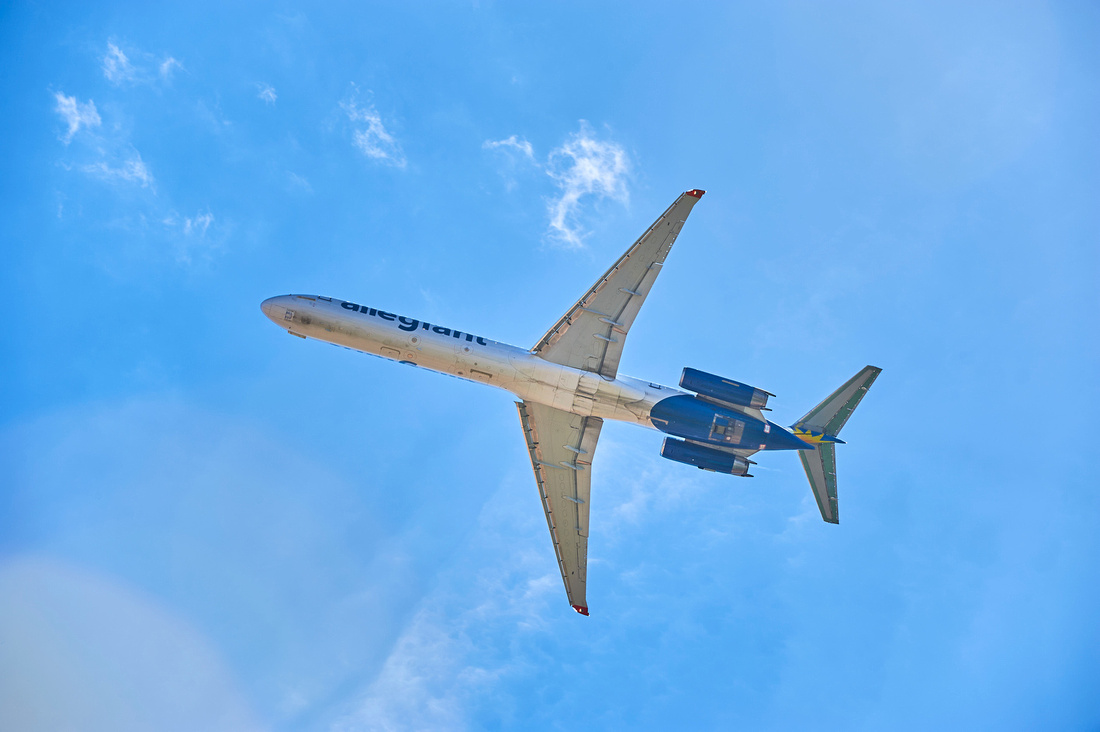 Then again, markings on the Allegiant MD-80 are still visible, above, and even without visible lettering, most people might recognize the distinctive livery of the Southwest Airlines B737, below. 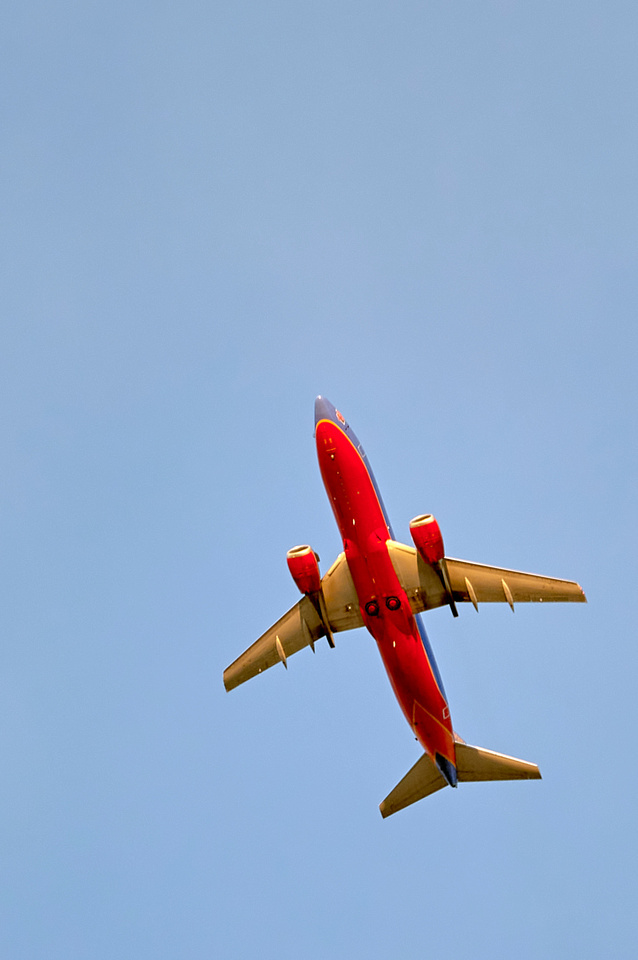 Each of the above has the major axis of the aircraft running diagonally across the frame, which adds energy to the composition.

Then again, images can be shot or, subsequently, cropped to align that axis with an edge. 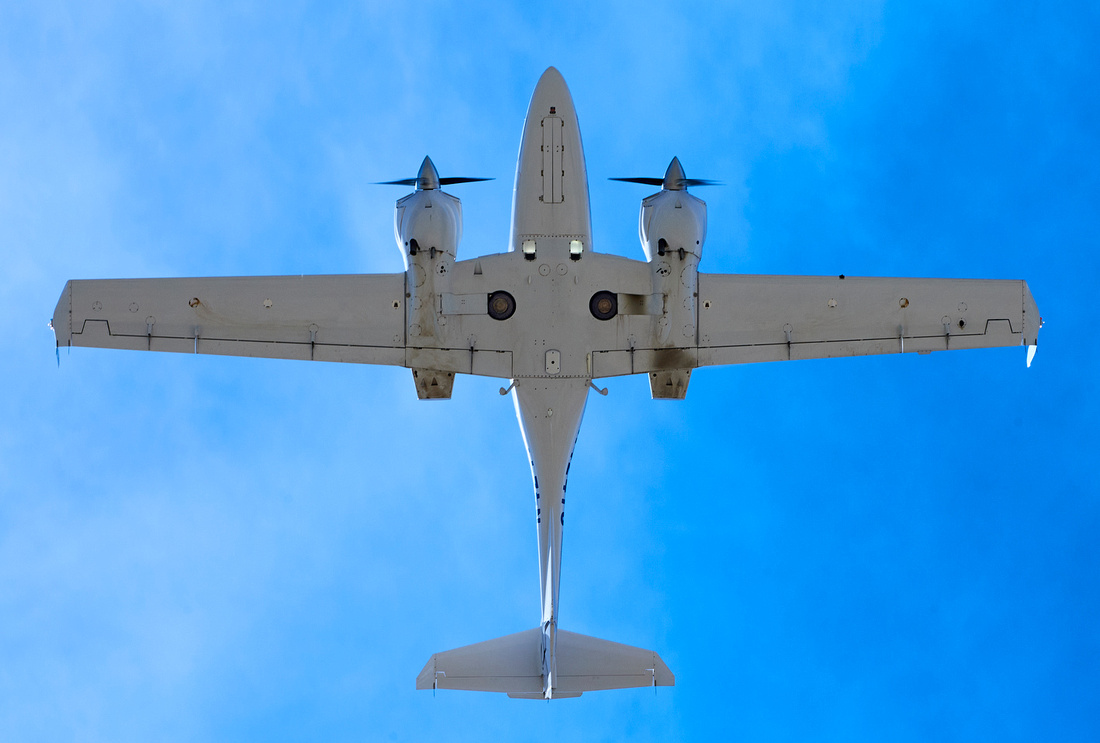 The DA-42 image had the aircraft oriented square to the frame to begin with, and you can feel how it feels different from those diagonal ones. (Full disclosure: I had to rotate the original capture 0.5 degrees. There. Now you know the truth.) This composition is suggestive of an eagle spreading its patriotic wings rather than a hawk streaking across the sky. More static, but also more formal.

Helicopters Too, Of Course

Helicopters are typically easier to capture looking up at their bellies, since even if they are not at your disposal for the photography, they might be tasked with working over a fixed spot on the ground, and you might (safety first) be able to work beneath, or nearly beneath, them as they work. 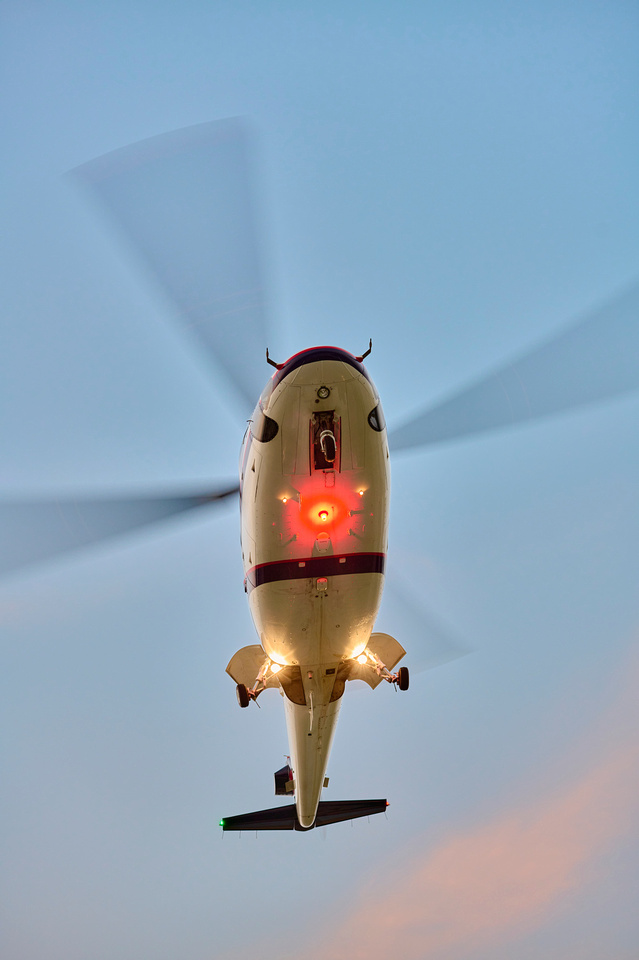 An S-76 departing its helipad after our shoot. This shot wasn't required for the project, but you can bet I captured it when it presented itself. I will go ahead and call it more than luck that I caught it with the beacon illuminated, since in the 20-or-so seconds that the Sikorsky was overflying me, I caught 6 frames with the red light on. I don't always remember, but when I do, I try to time my shots to have that bit of extra zing.

I will ascribe to luck that this, the best of the lot, also has the two white lights illuminated on either side, just forward of the beacon. Those lights were not synchronized to each other and, including this image, they only appeared "on," together, 7 times. So, to get the red and the double-white…score!

Still, while this is a fine and potentially useful image, it isn't clear what the aircraft's mission would be. 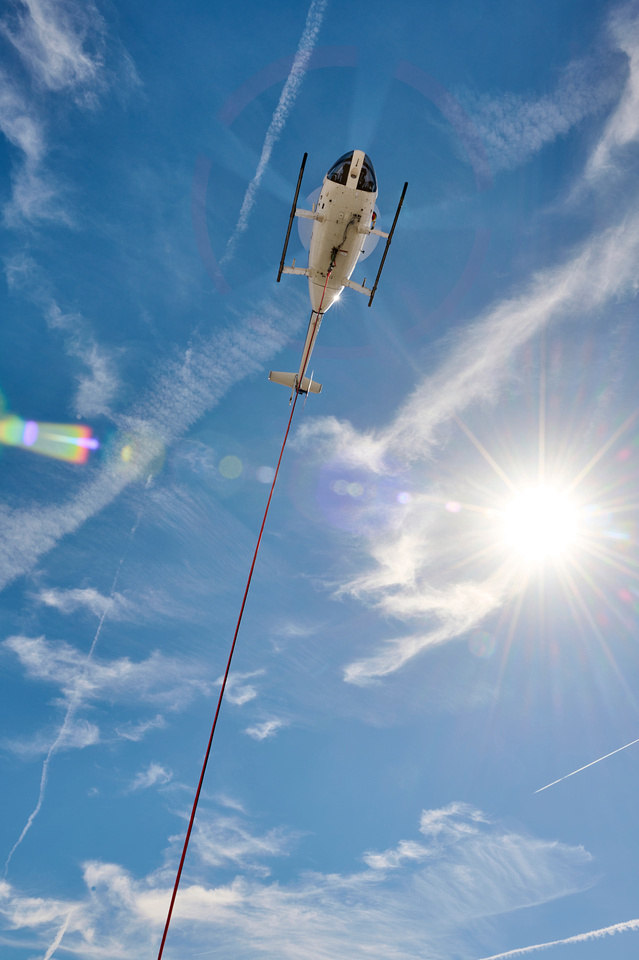 This is better — an MD 500E picking something up on a cargo line. This sky is quite active, unlike any of the previous ones, though not distractingly so. There's lots to see, but no doubt about the subject. (Well, except it would be nice to know what was on that line…) 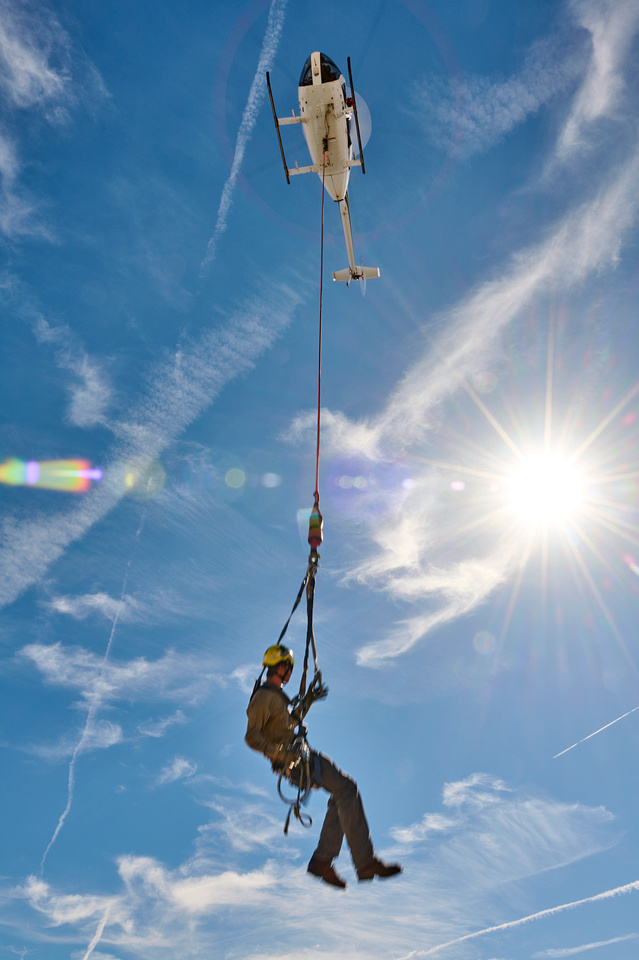 Ah! Not a what, but a who; a lineman heading up to check on a pull the helicopter had just completed. 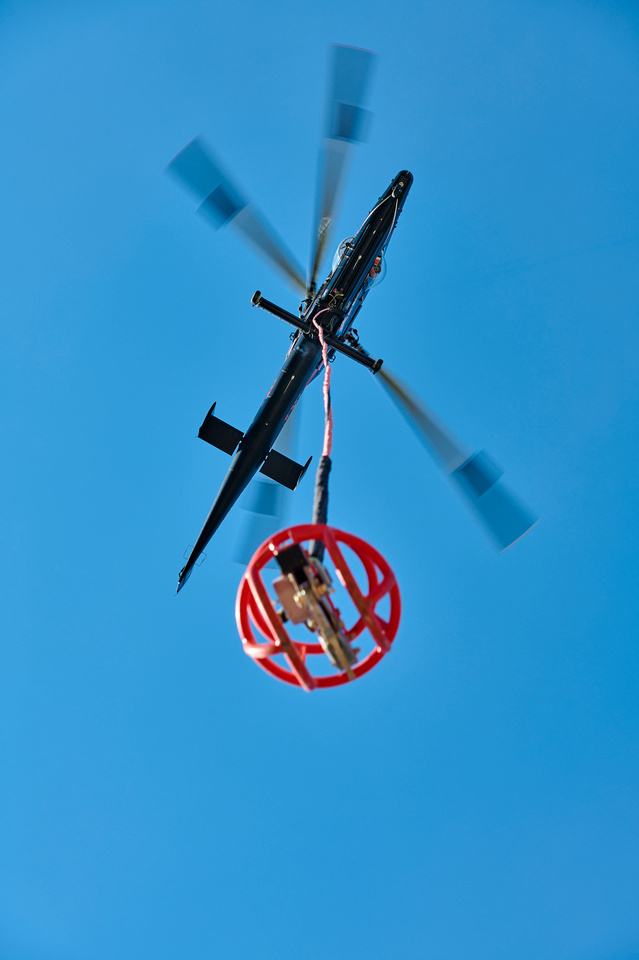 This K-MAX was descending toward ground crews who would attach a concrete bucket. Nice. 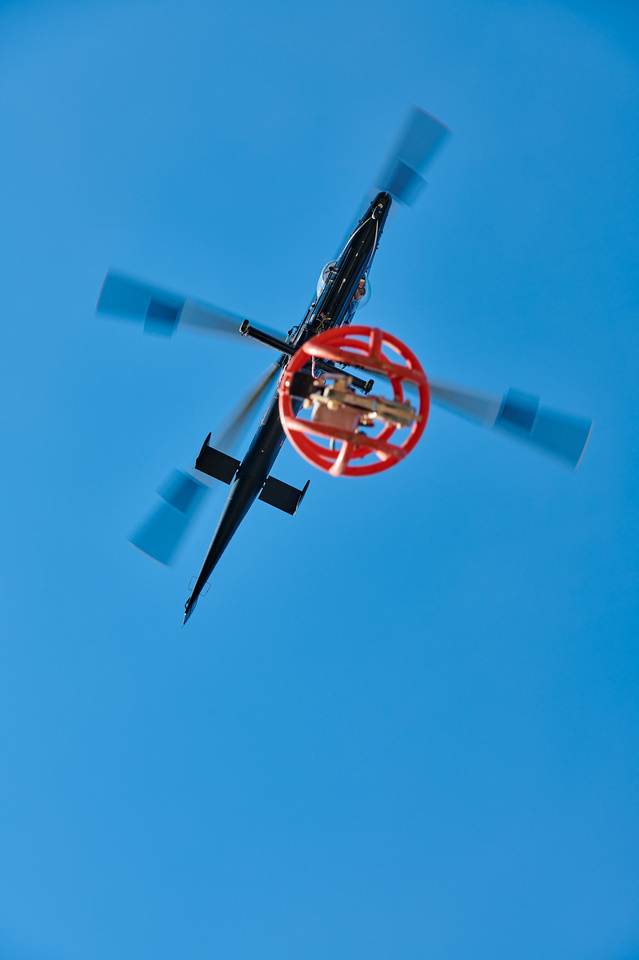 Not so nice, because the hook basket is blocking the aircraft. If the basket had been the thing in focus, it might work, though even then it would probably be better to have it not shield our view of the aircraft. 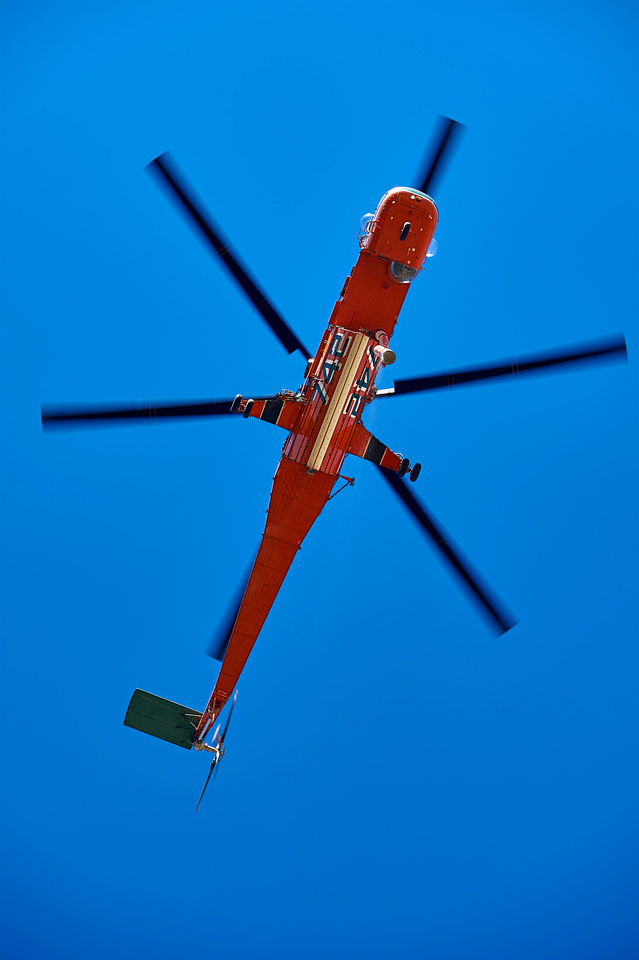 A bold portrait of a firefighting Air Crane that had just filled from a pond and was returning to the fire. A strong shape, clearly captured — you never know if/when such an image could find an application.*

If the target is a fixed-wing aircraft, you have to work quickly to compose the image as it saunters or glides or flashes by, so you really need to know your camera and lens. A zoom lens is probably the right choice, and be ready to avail yourself of its various focal lengths since, often, you can capture bottom-up images before and after it is directly overhead, zooming in and out to adjust the apparent size of the aircraft in each image.

If possible, test your exposure settings before the capture event, since a bright sky can lead to the camera darkening the aircraft as it attempts to even out the scene, brightness-wise. Depending on the environment and the lighting, it might even be preferable to set the exposure values completely manually, not allowing the camera to change them on the fly — sometimes a bright cloud might appear in some of the compositions, which could further darken the exposure, or even a reflection of the sun off the paint or the windows, again leading to darker than desired results if the camera is changing things for you.

It is critical to set your shutter speed appropriately for the aircraft type. A jet aircraft can use as fast a speed as you care to set, assuming there is otherwise sufficient light. Prop-driven planes will benefit from shutter speeds in the 1/320 or even 1/500 second if need be. Slower will provide more prop blur, but don't sacrifice overall sharpness — lost if the camera doesn't smoothly track the passing plane during the exposure — for extra blur in the props if you don't need to.

Finally, if what is overhead is a helicopter, shutter speeds need to keep notching down even slower. Then again, the aircraft might not be moving against the sky as quickly as a plane, so usually you can comfortably capture blurred rotor blades without sacrificing overall sharpness. Still, that can be a challenge under the noisy, pounding, knock-you-over downwash.

Photographing an aircraft while looking up at it can lead to strong images. The visual complexity can be reduced, due to the symmetry inherent in aircraft of all propulsion types, and the background is usually simple and clear.

Note, however, the similarities among the above images. Yes, these belly-up images can be useful, but if you shoot a million of a single subject, don't expect to find a million-and-one uses for them. Yes, make these images and, yes, make more than these images.

* ROTOR magazine was suddenly putting a story about Erickson Aircraft, makers of the Air Crane, on the cover of one of their issues. The story was about Erickson's 50th anniversary, and the company had provided photography to accompany the writing. Still, I thought I might have a photo to contribute for the cover, one I had made while on assignment for them several years prior. 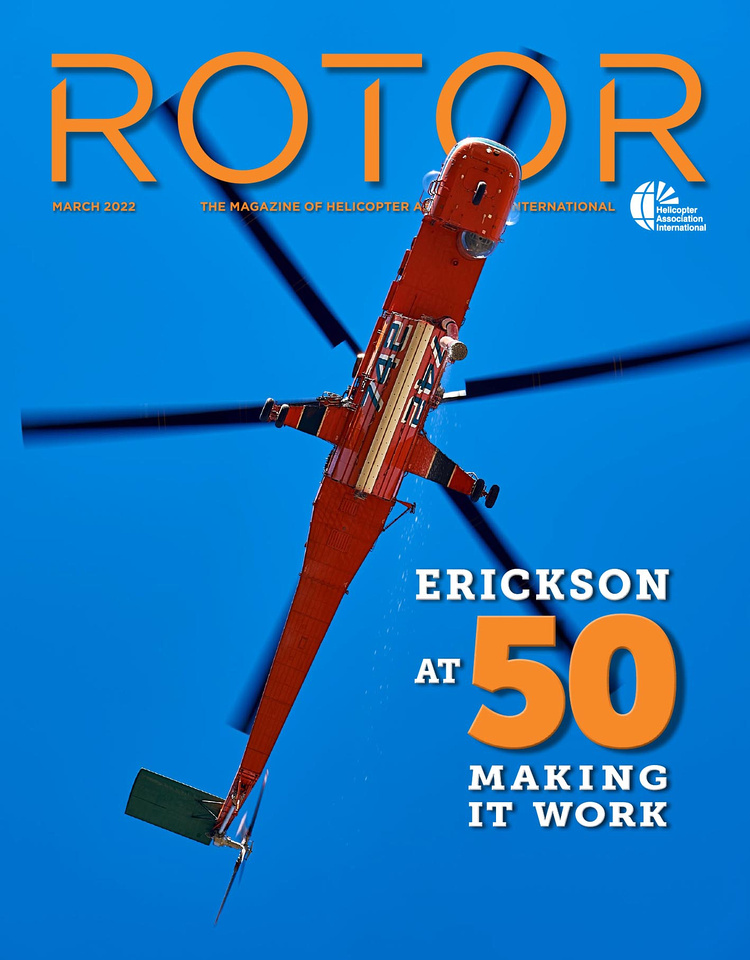 And sure enough! I pitched it to the magazine, they loved it, and ran just what you see, with not just my photography, but also my design and production of the cover art.

Thanks go out to the people and organizations that were instrumental in my making these images: ISAP; Coolidge Municipal Airport; Town of Gilbert, Arizona; Falcon Field Airport; Children's Health, Dallas; Rotor Power; Kaman Aviation; HAI/ROTOR magazine.