Journalists live by six key questions when examining a subject or event: who, what, when, where, why, & how. (Apparently these are referenced in a Rudyard Kipling poem, so are sometimes labeled as the Kipling Method — I did not know that.)

Photography can be used to answer some or all of those questions, which is what a photojournalist is tasked with. But even commercial photographers must be cognizant of the questions and, as appropriate, their answers.

Some of the answers to those questions might be simple: "Who is making the photo? Why, me, of course!"

Then again, you might be hiring a photographer, and "who" can be an important consideration. (One option illustrated just below.)

The other questions might have similarly simple or not-so-simple answers ("When am I taking the photo? Right now, while it's raining. Huh? It's not raining? Now what do we do?") 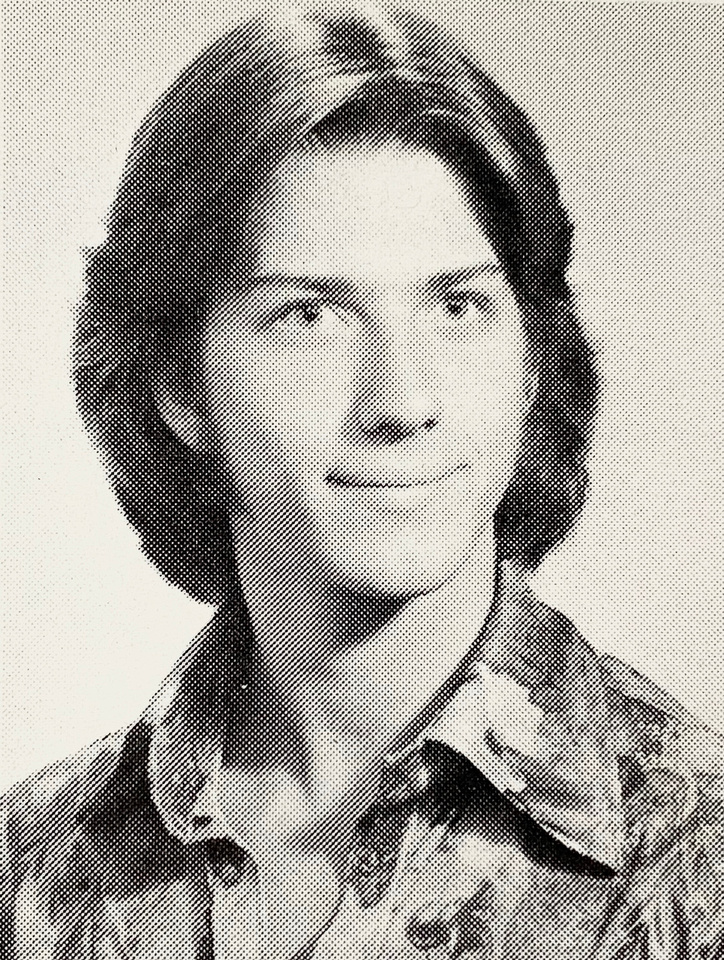 Halftone of the photographer as a young man.

But wait! There is a third level in which those same questions have relevance regarding the art, science, and practice of photography: Who is going to use which (what) photo, and for what purpose (that last one is actually the "why" question)? When, where, and how will the photo be used?

I often mention these third level questions in my discussions of the first two, though, again, without having recognized the parallels. What is the intent of the photo? Who is your audience? Where will the photo appear? Etcetera.

So, let's look at a particular "how" a photograph is used, with examples a'plenty!

In the nearly 4 years, as of this writing, over which I have been contributing to Helicopter Association International's ROTOR magazine, it has been my photography and a writing style that skews a bit from journalistic that has led to my continued association with them. These are not in-depth pieces, but higher-level looks at interesting topics, marrying that photography and writing with a third element, graphic design, wherein I also design and produce the final art, from opening image to final dingbat.*

These photo essays, as they are commonly labeled, share one nearly universal feature: a strong, two-page, opening image, with a headline and short introductory paragraph that previews the topic. This introductory spread is the answer to a third level Kipling Method question, "how will the photo be used?" 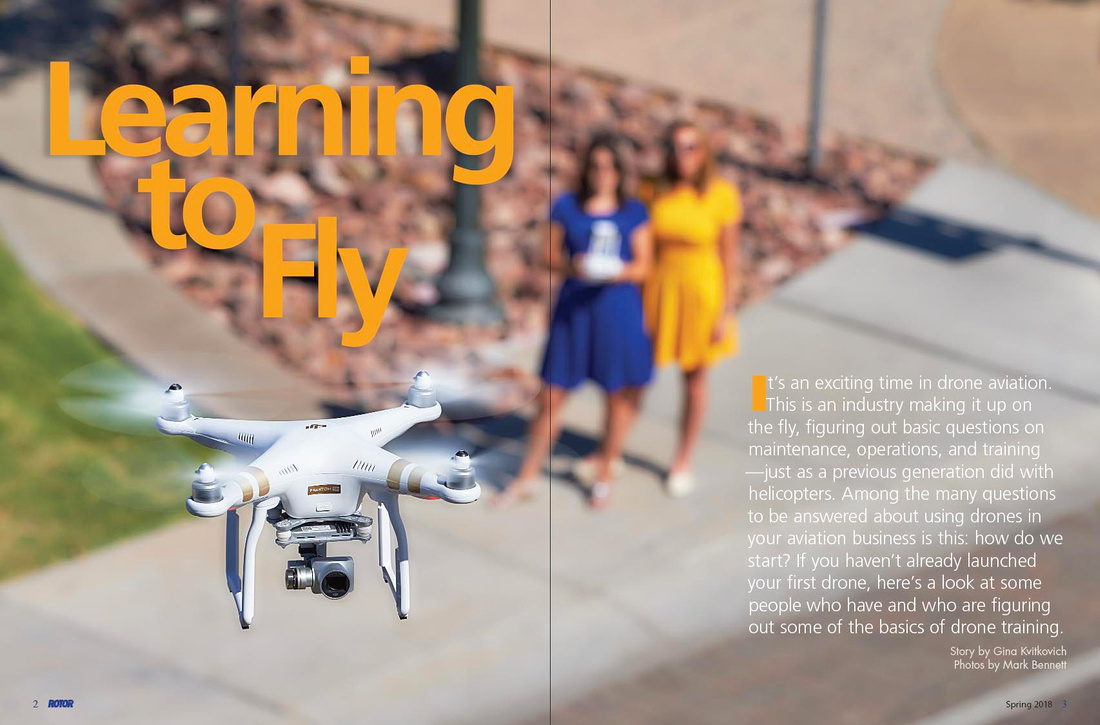 Actually, this first example is the only one that sports only my photography and design work, with the copy written by Gina Kvitkovich, HAI's Director of Publications and Media. Still, the key feature to note about the photograph is: it was made with plenty of room for the headline and deck.**

Not that I knew the headline when I was making this image, nor the hundreds of other images I made to support the essay, nor did I know how I would be laying out the essay. All of that was in the future. But in every photo shoot, I look to include compositions such that, should a two-pager be needed, with room for big and little text, I'll have appropriate images to choose from.

A photo essay is not the only time a two-pager shows up. Brochures might need a large image with only a little text. Trade show graphics. Banners on web pages. Slide decks. 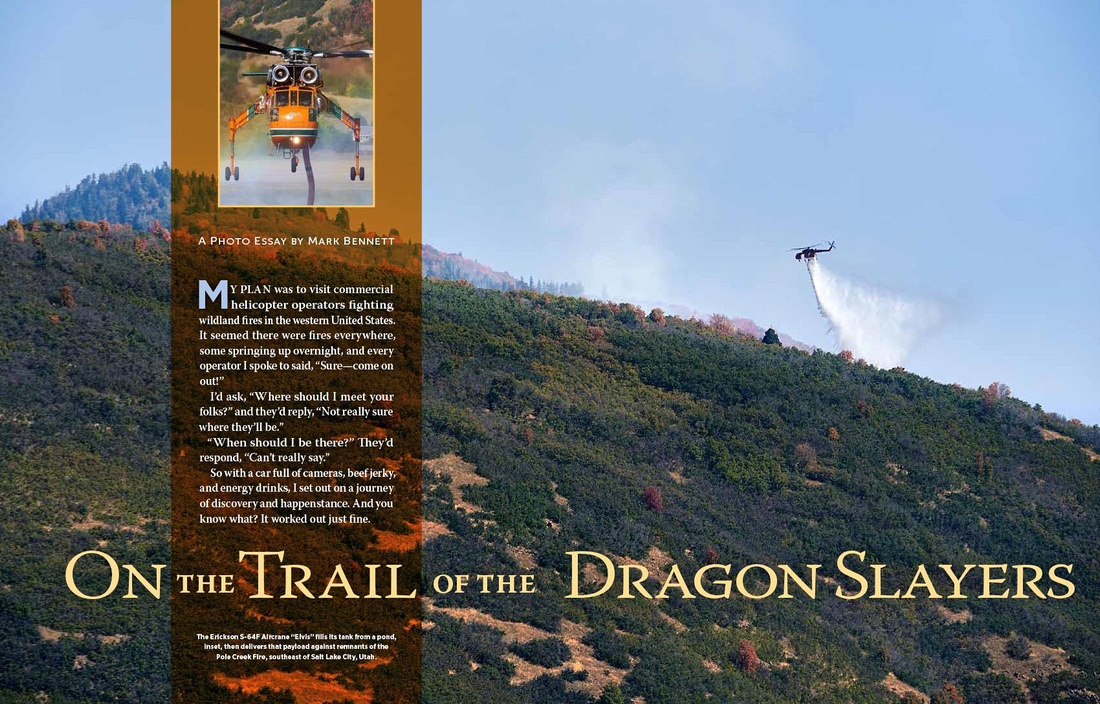 Here is the opening spread of my essay that appeared in the next issue of the magazine. In addition to overlaid text, it has an additional photo and a tinted block of color, additions that can find value in those other applications (brochure, trade show, etc.). 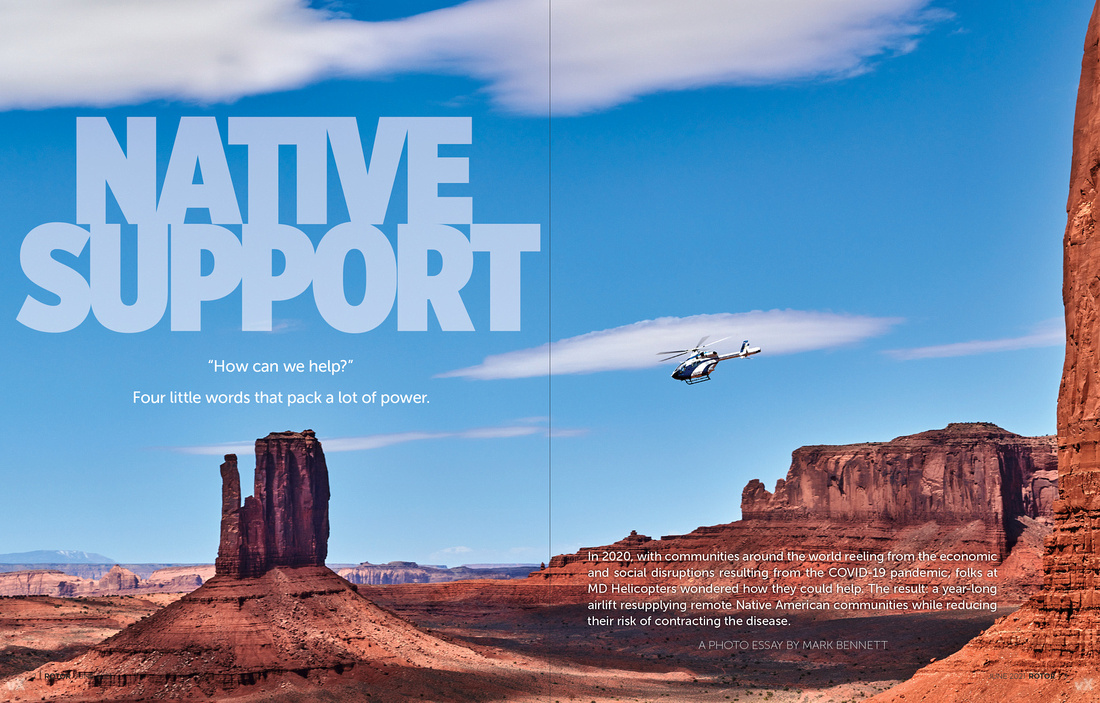 As with the previous spread, this one places the visually small aircraft in the broad expanse of its environment. What I've noticed is, when we're in or near aircraft, they seem to fill up the space, but in reality they are tiny machines in a vast world, a vastness that helicopters and airplanes are designed to conquer. It can be good and effective to illustrate that reality.

Fair enough, but it's also not the only way to fit the subject into the environment, or into the essay. 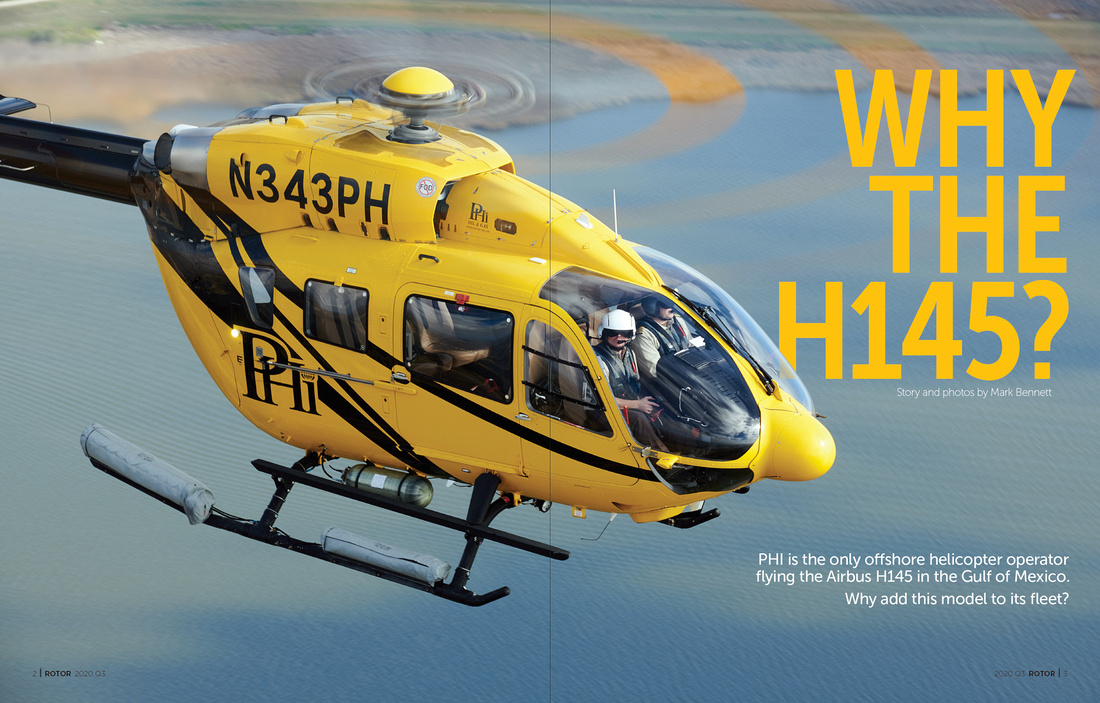 There's nothing wrong with going large, aircraft-wise, and it makes sense here because the story is about this model of aircraft, whereas the previous examples were about broader topics that involved aircraft. The background still serves to put the aircraft in its environment, unsurprisingly water, based on the installed float systems, but there is no question about the subject. 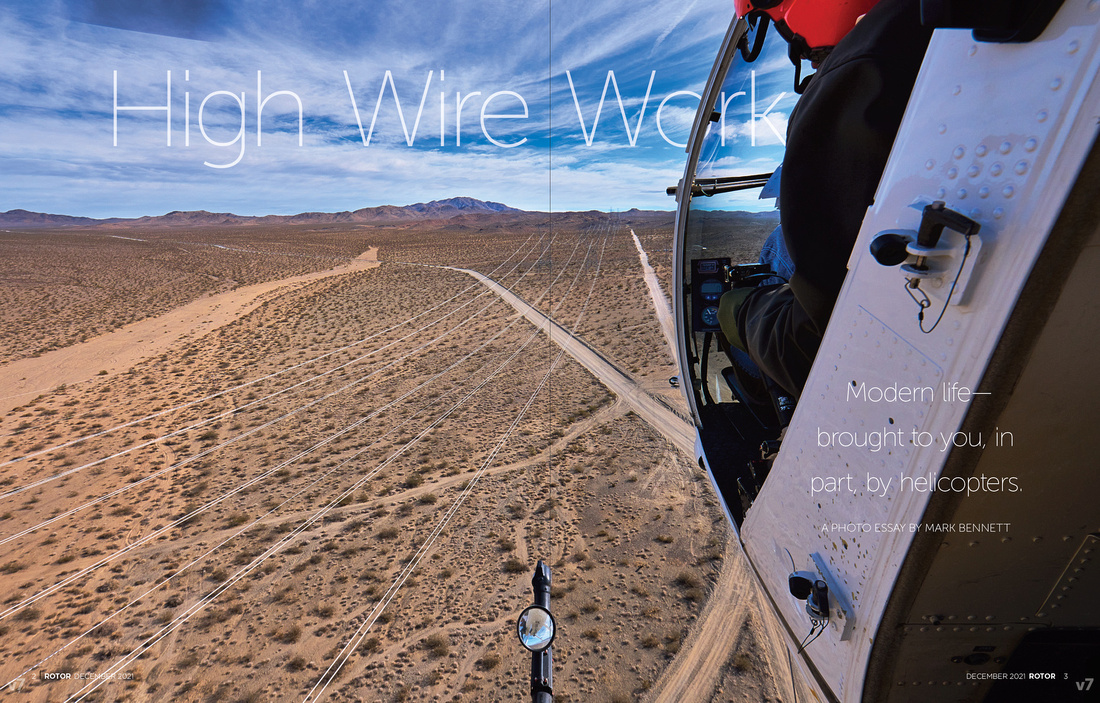 To tell the story of helicopters working on or along powerlines, I used an image that is nearly 50% aircraft, yet the particular aircraft model was not the focus of the piece, as the composition and layout make clear. This also adds the sense of being in a helicopter, and those who have sat where I was sitting will recall the sound and the wind you feel there — a nice little extra for some readers. 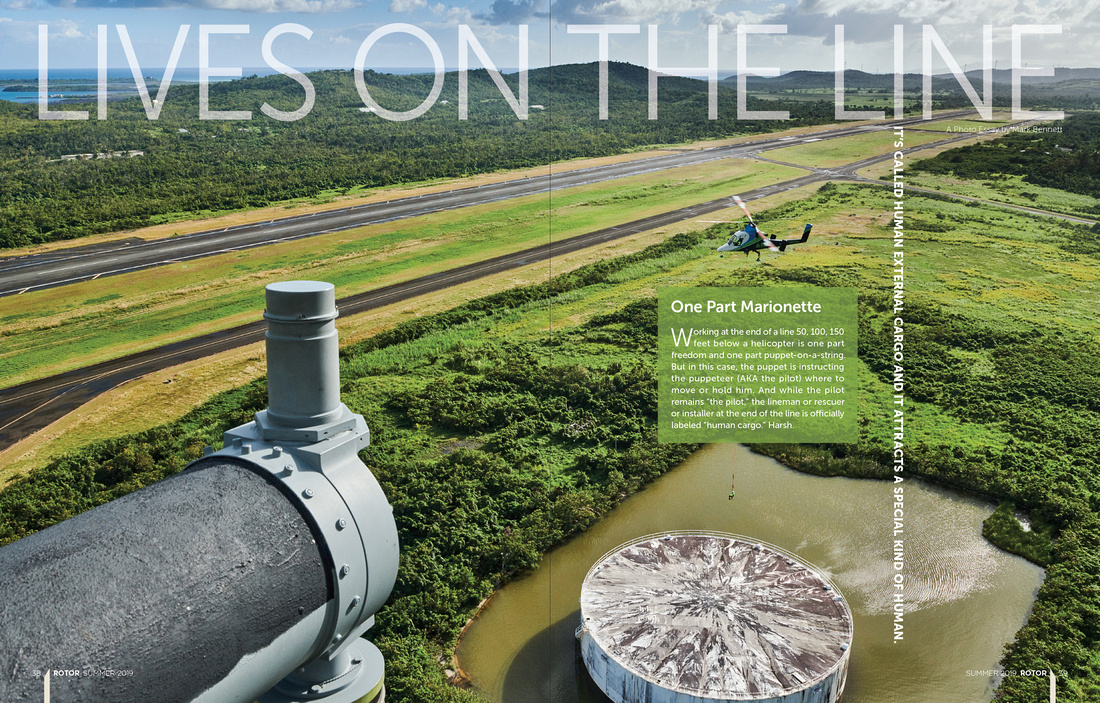 This image takes both approaches, in a way — an aircraft that is shown small, engaged in its mission in a large world, but a portion of the camera ship pokes into the frame which, even though it represents a very small portion of that ship, visually consumes much more of the frame. (The people who have sat where I was sitting for this photo are, as I've mentioned in a previous article, a much smaller population.)

Notice the fun I've been having with the typography, by the way. Different typefaces, arrangements and alignments. Each time I'm developing a different character, fitting in with, and supporting, the story. 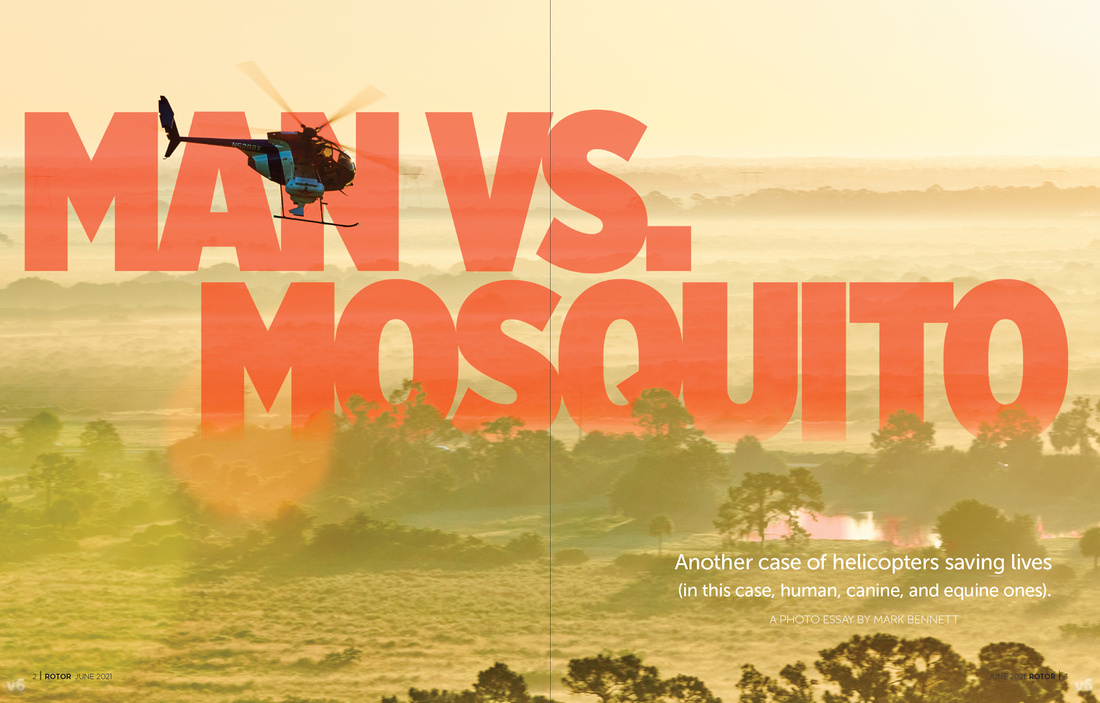 Again, a subject that is not about a particular aircraft, so the one illustrated is shown in its environment, while the typography is tightly integrated with the image. The development of the graphic is time-consuming, sure, but the results are also eye-catching, and that's your first task for a graphic. 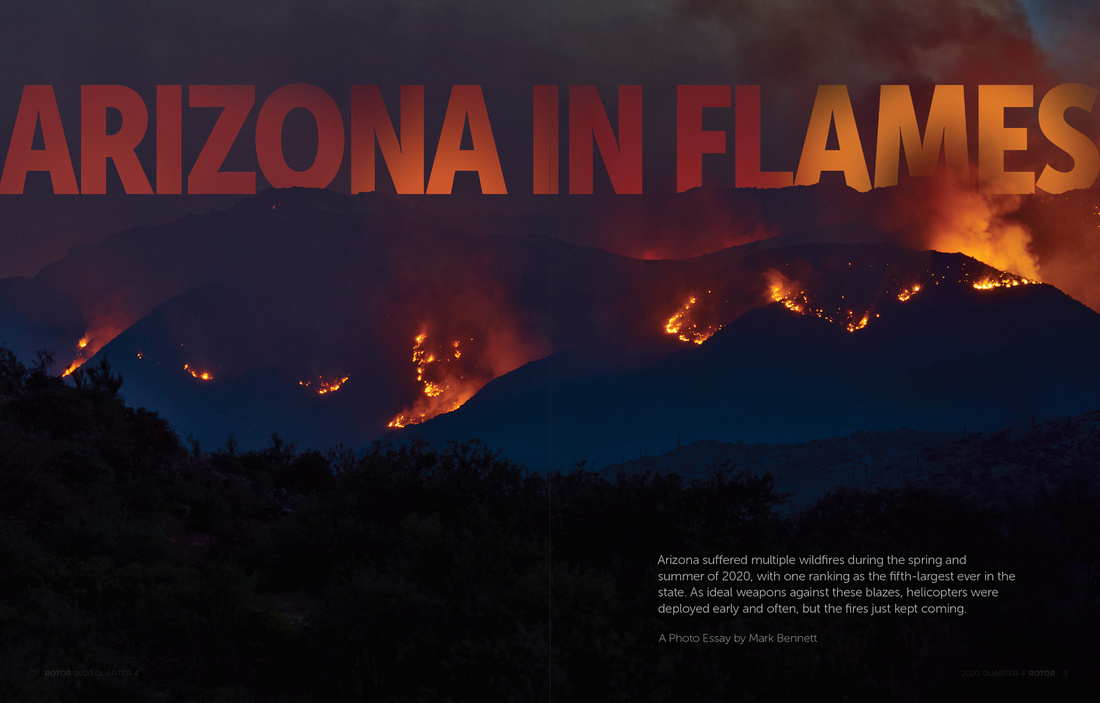 I'll end with a particularly unusual opening spread — one with no aircraft. To really bring home the severity of the Arizona wildland fire situation in the summer of 2020, showing only one of the fires in the dwindling dusk made the stakes clear, and the following pages of photos put the urgency felt by the crews more meaningful.

When photographing a singular product or a menagerie of equipment, if there is marketing to be done with the images, keep in mind the potential for large images that must accommodate large type, small type, perhaps even inset images. I am not suggesting you must know how such a design will play out in advance, but if all the images you, or your photographer, make are frame-filling product, you'll be cutting out an opportunity to tell the story of your product or service in a single, grand, image.

* A dingbat is a graphical piece of type that doesn't (usually) represent a letter or numeral. They can run from super simple, like a bullet (•) to highly decorative. In the case of ROTOR magazine, the text of each article ends with a stylized letter R.

** A deck is the blurb that follows the headline on these opening spreads. Its role is to help entice the reader to continue reading by teasing the tone and the merit of the words to follow.

*** There is no *** above, so I figured I'd just put one here and share this fact: asterisks are a form of dingbat.*