My previous article was about photographing mosquito control helicopters in Florida. My current efforts have me crisscrossing the country in search of powerline helicopters — the action is more varied than battling mosquitos, and carried out at slower speeds, which combine for more opportunities in a variety of activities and locations.

Actually, at this moment, I have been to but a single location, near Belen, New Mexico, and there flew with the company Rotor Power, but I'll soon be off to wherever else I can capture the stories and images needed for my upcoming photo essay in ROTOR magazine.

But enough about the the future — what about the (very recent) past?

If you're selling a widget, photos of widgets sitting on a table would be a bare minimum, and a widget in action is even better. Of course, sometimes the widget is inside other widgets when the action is happening. 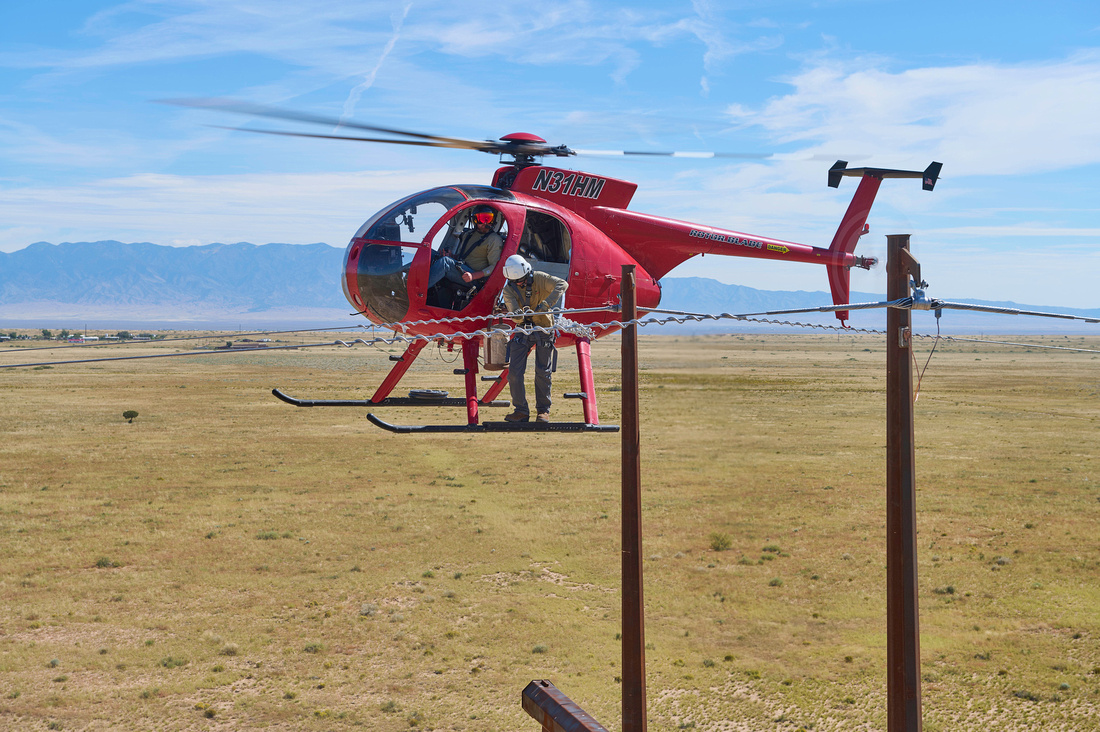 If your widget works inside of, or applied from, a helicopter, and especially if you're selling helicopters, it's definitely best to show the helicopter in action. The above shows a lineman installing vibration dampeners on a combination fiber-optic/static line. Nothing wrong with this shot, and it might make it into the essay (though there are still thousands of shots for me to take!).

For a photo essay — or for a longer marketing piece like a brochure or as part of a web presentation — you need a story, and stories work better if there is a setting for the action. One plus (among several) for the above photo is it tells a story by including the objects and the action, and also the setting, near (towers) and far (plains and mountains). To accomplish this, I relied on a nimble aircraft, good piloting, an idea of what I wanted to show, and the appropriate camera gear — namely, a wide-angle* lens.

* Another term for "wide-angle" is "short focal length." I will use the former, but the meaning is the same.

Let's see how a wide-angle lens helped tell this story. 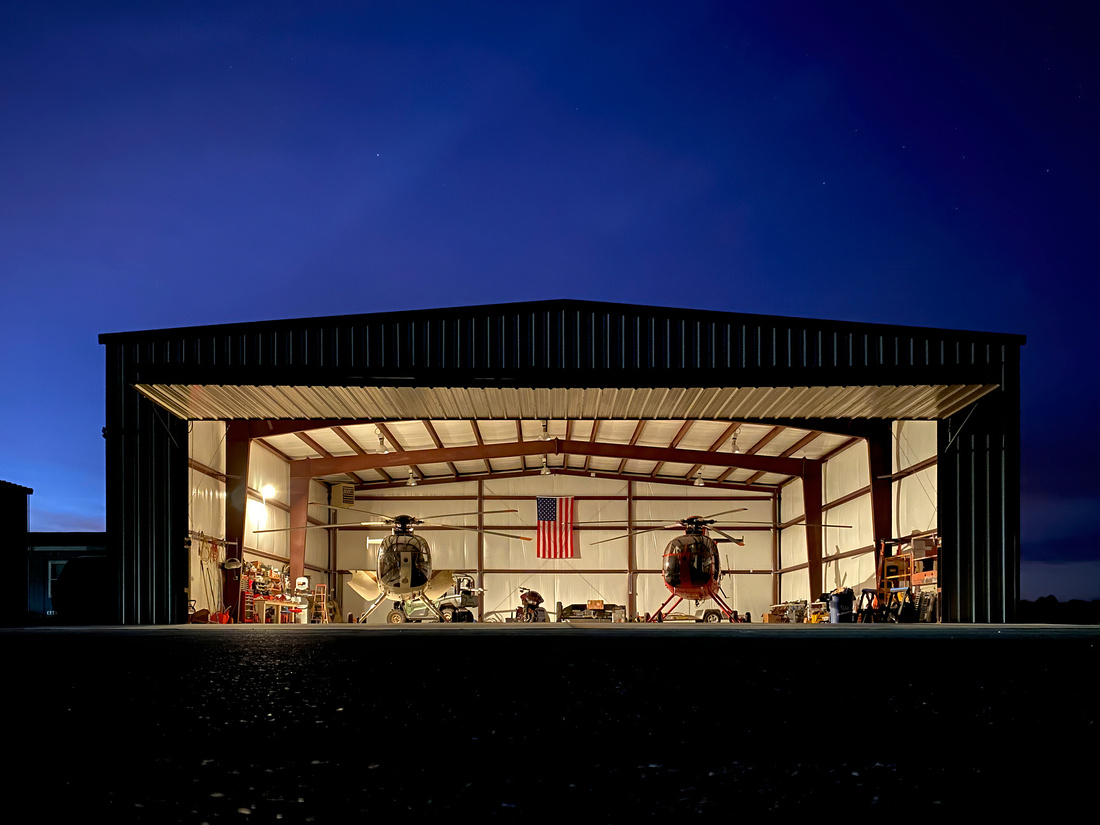 When I arrived at the Belen Regional Airport about an hour before sunrise, one of the pilots had already opened the hangar door and, seeing an interesting scene, made a photo of it. He had just finished that when I got out of my car. He showed me the photo and I, being no fool (well, not as much of a fool as I could be), wanted such a shot of my own. Down to the ground I went, where I composed and made this long-exposure shot with my iPhone.

As you're aware, smartphones have wide-angle lenses, which was good because I was up against a wall of hangars and, thus, a narrow-angle lens could not have captured the full scene. 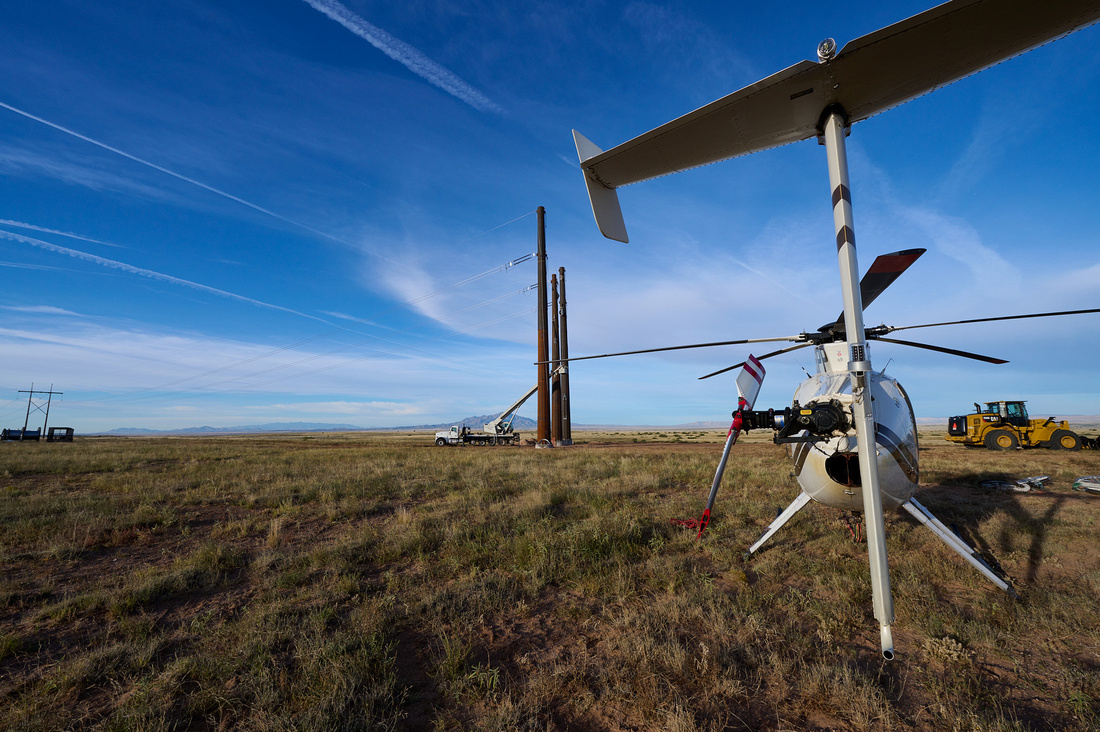 We flew to the landing zone for the day's work before the sun was up, and a bit later I captured that location, including the reason we were there (transmission towers) and the general setting of expansive plains with mountains on the horizon. Those clouds and contrails were a nice touch, too.

I made this image with a wide-angle lens which, because I aimed it slightly above the horizon — to include more of the helicopter's vertical/horizontal stabilizer — resulted in vertical features (that vertical stabilizer, the towers on the far left) leaning in toward the center of the frame. See how the towers in the middle point straight up? That's because they are already in the center.

You can "fix" the distortion with software, but doing so crops out some of the scene. Like this: 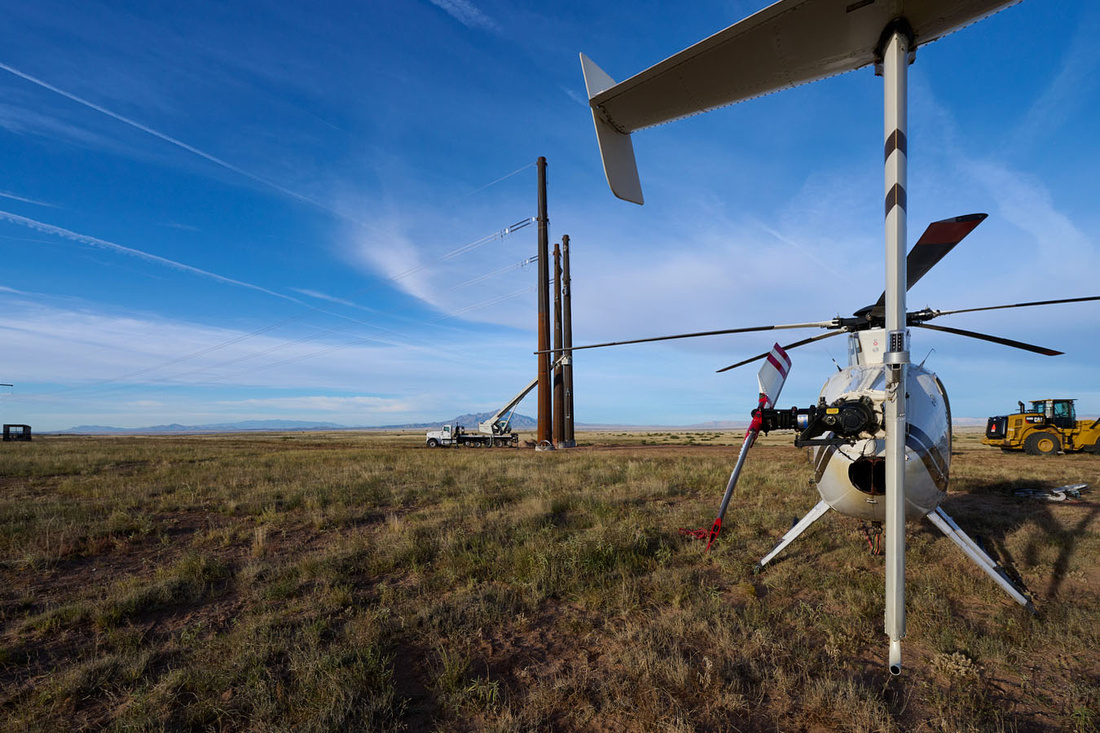 I prefer the leaning one, at least in this case. Your mileage may differ. 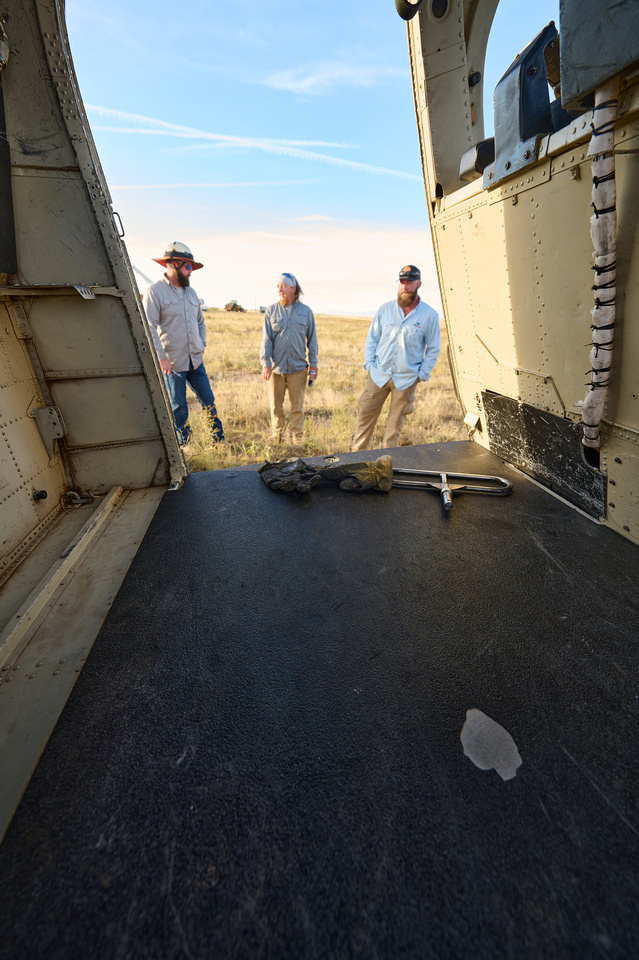 Sure, in the above image the "thing" they are doing is just chatting, but people do that, and by including the interior of this helicopter, with gloves and D-ring lying there, we see more than either "people chating" or "aircraft with stuff in it." It's all part of the story of the work they do. (That D-ring was removed to put, instead, the more usual step on that side of the cabin — I would soon be sitting with my legs out that door, one foot on that step, the other on the step protruding from the rear strut.) 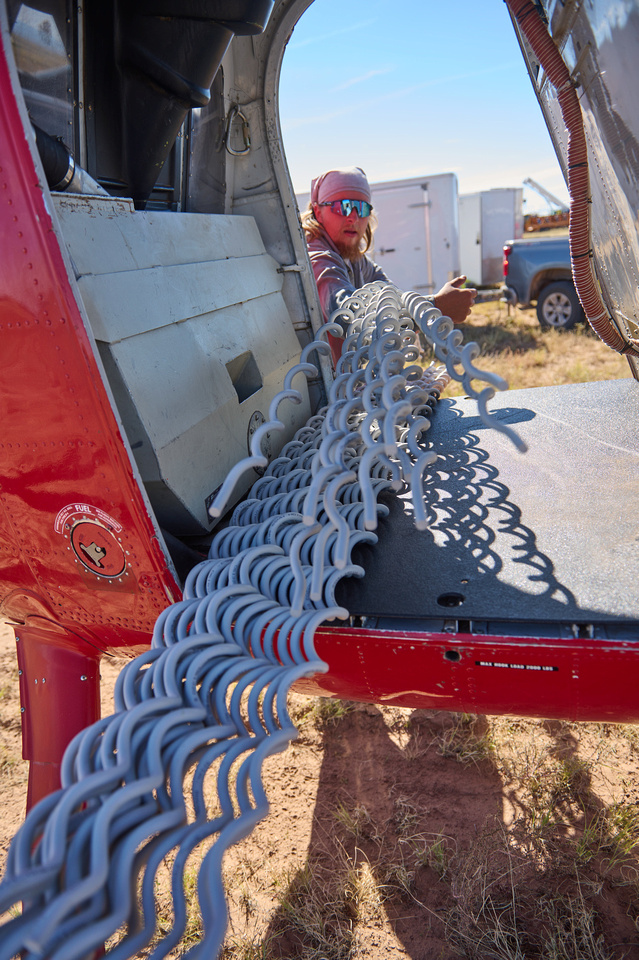 Using the same basic compositional elements, there's a little more action happening in this image: a lineman loading those vibration dampeners, mentioned at the top, into the cabin.

In each case, the sense we get in those two photos is that you, the viewer, are standing right there. In the scene. You can put your hand down on the floor of the helicopter and touch that bare spot; or reach out and feel those dampeners, like springy PVC cup-o'-noodles noodles! The same is true of the image from the tail end of the aircraft; you can almost reach out and grab that fin.

How about in the air? What does going wide do up there?

In the air, shooting wide is more about including a broader view of the action in its setting, though in the case of human external cargo operations, it can be about just getting the aircraft and the "cargo" in the same shot. 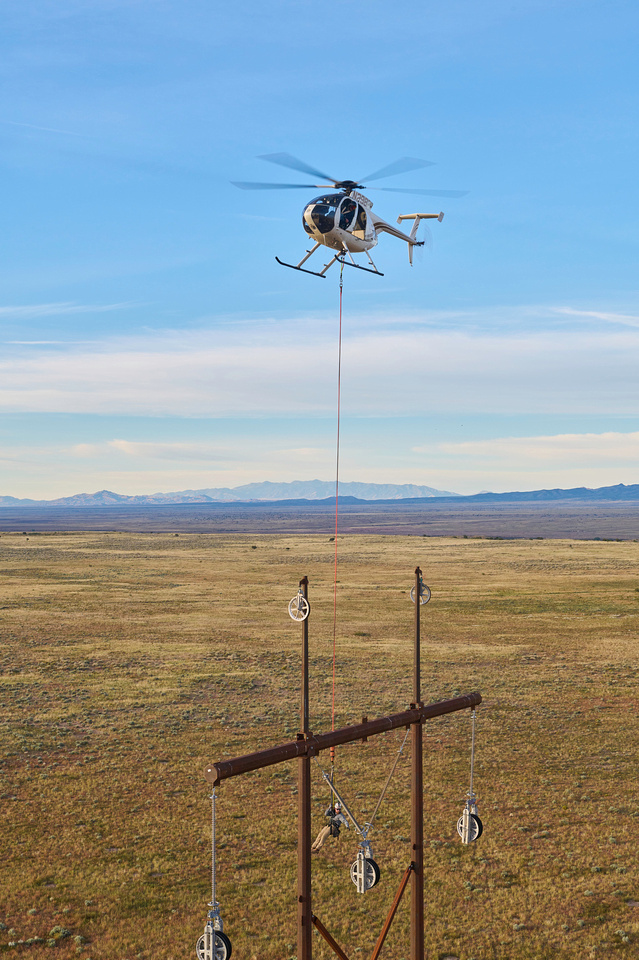 Shooting tall with a wide-angle lens led to a portrait of just another day on the job, right? Frankly, for some of these men and women, it pretty much is. 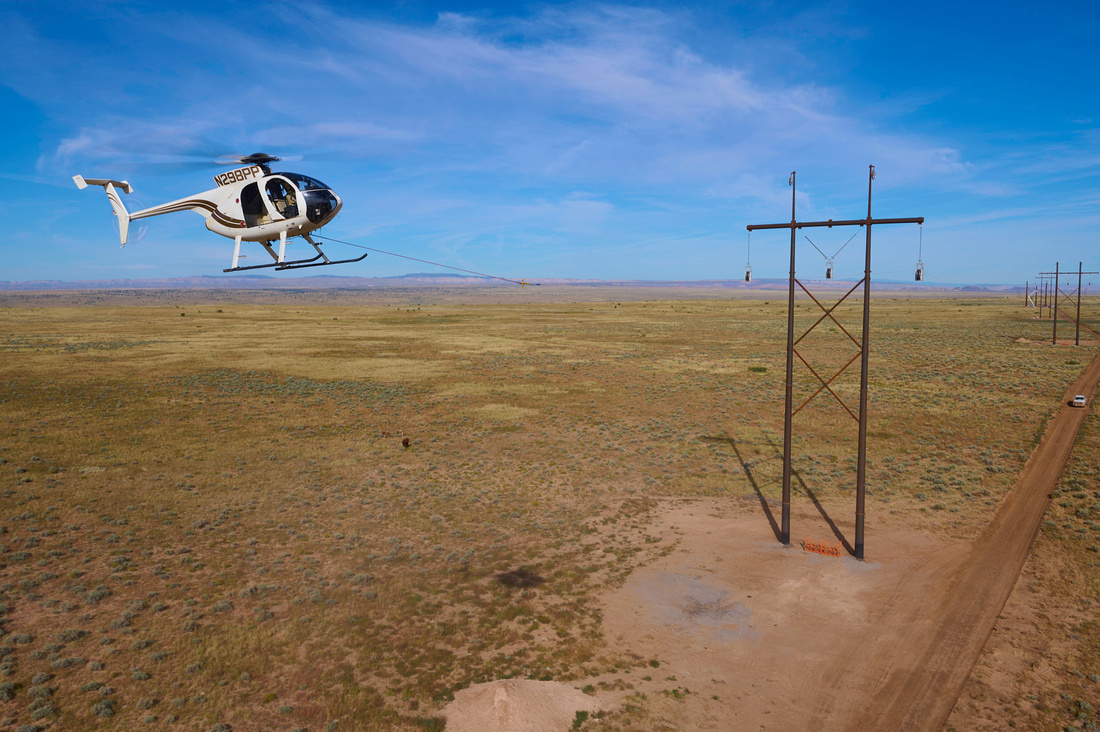 Or, go wide when shooting wide to show more of the location, more of the project. This morning they were pulling rope across eight spans, so I included some of the expanse of the scenery and the work. 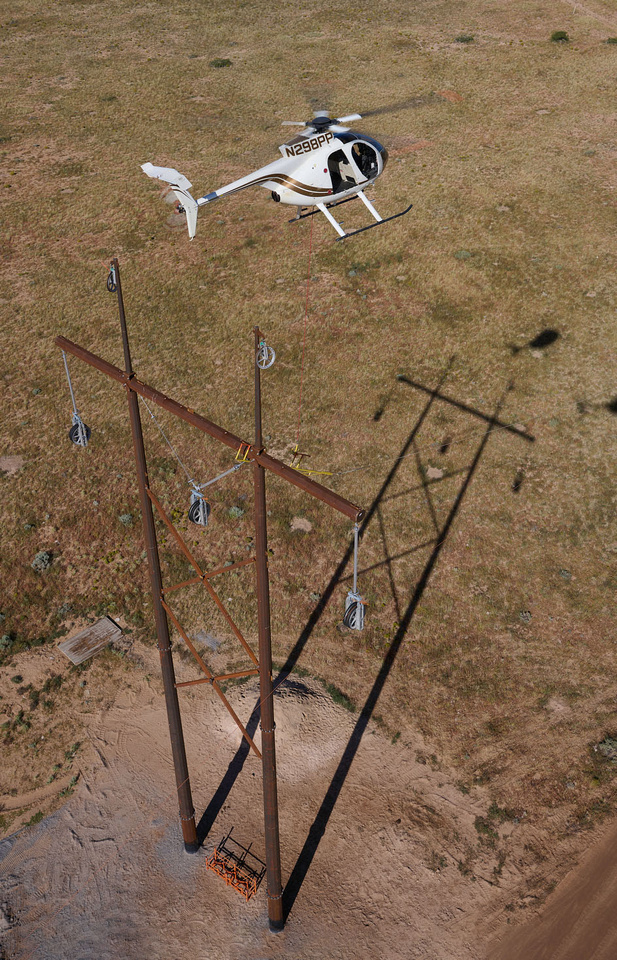 Because of the distance from the camera to the subject(s), these images lose the immediacy of those on-the-ground shots. Some immediacy can be reclaimed while in the air, if the situation supports it. 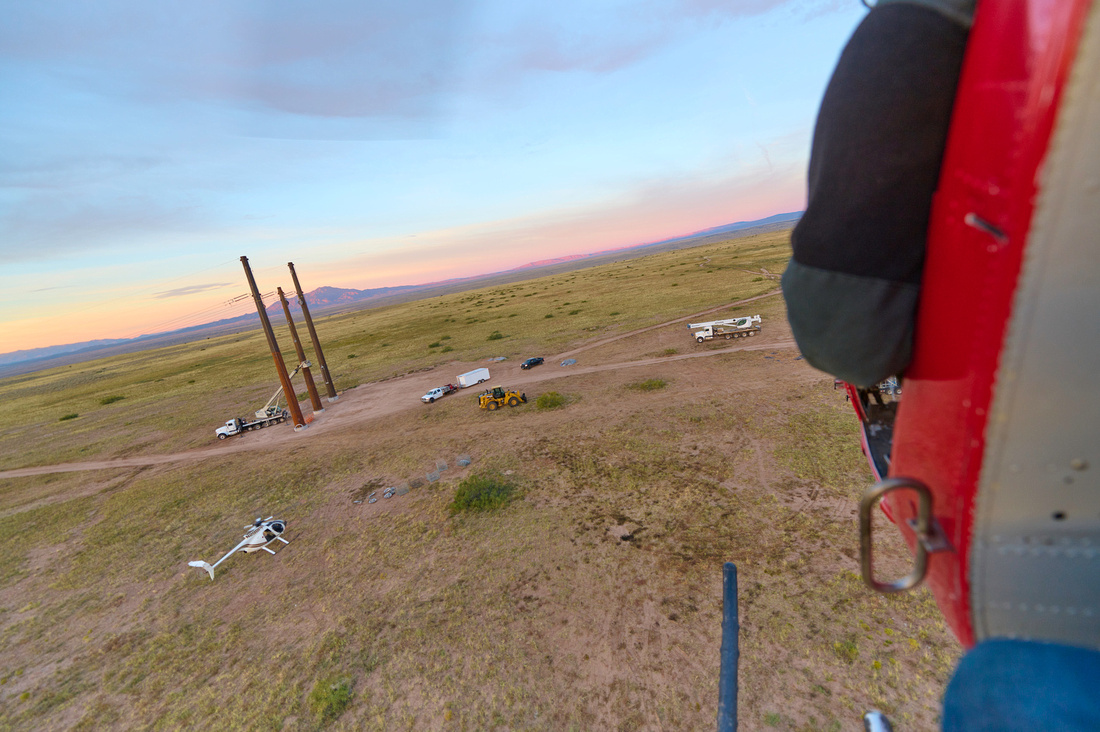 Back to early in the day when the sun was on the far mountains but not, yet, on the landing zone. By thrusting my camera outside the cabin and pointing it, blindly, toward the front of the ship, I capture both us (a bit), them, the landing zone, and the entire landscape to the southwest of us. Immediacy preserved.

Back on the Ground

A couple of dramatic ground-based images that, again, rely on a wide view of this world for their effectiveness. 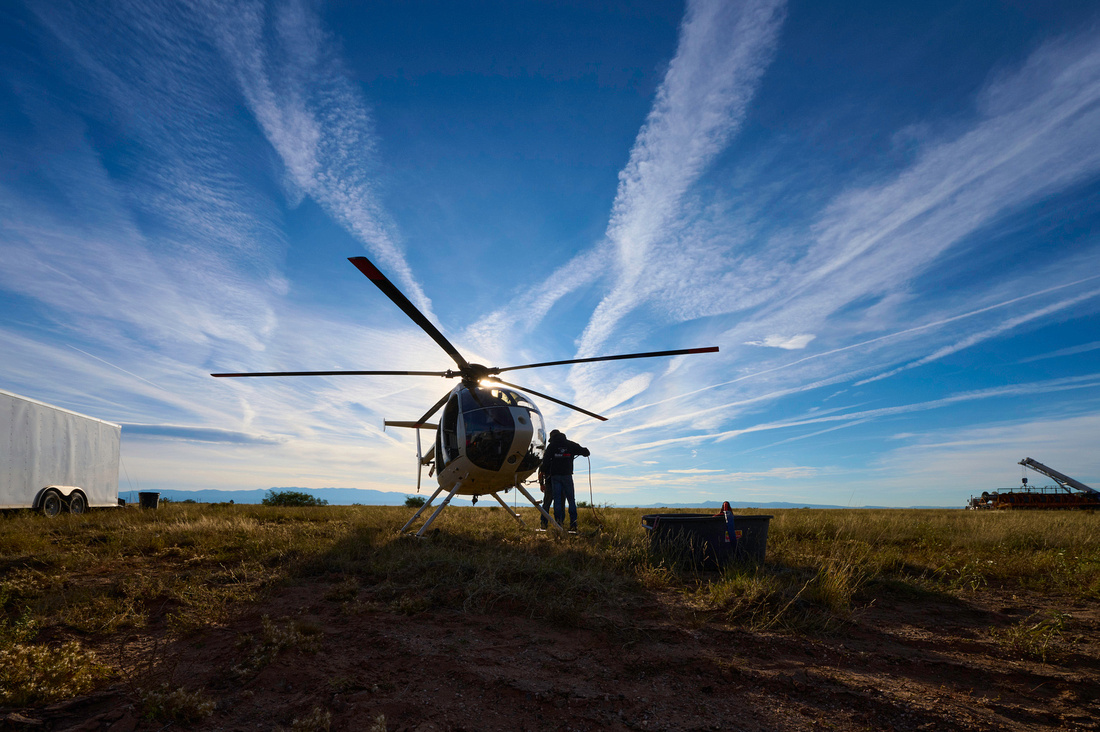 I've been known to crawl on the ground to grab a really low angle, looking thus up at the world. Then again, I'm not as young as I used to be and, unlike the hangar shot, the ground here is dusty, dirty, and full of prickly plants, so I merely held the camera on the ground, tilted its gaze up, and used the aircraft's shadow to assure a dramatic composition. Shoot once, check the result on the camera's screen, down to the ground again for another shot. The aircraft is nearly silhouetted, but not entirely, while the crew works on the side-pull rigging. And those contrails? Spectacular, right? You can't ask for 'em in advance, but you can certainly use 'em! 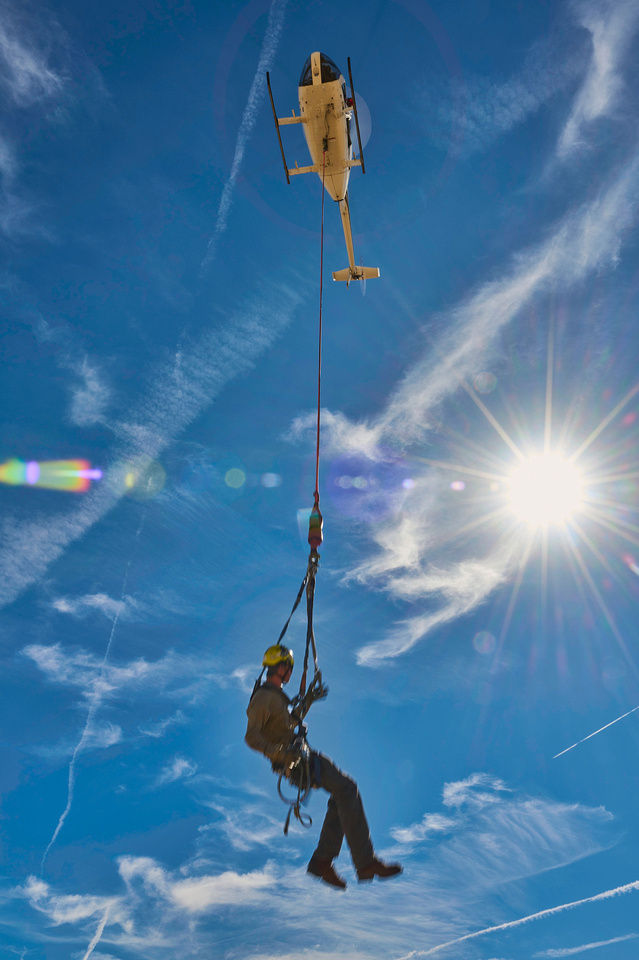 This lineman is headed out to check the rope pulls and, just as he was being whisked off his feet and into the clear air, I snagged a frame capturing obvious action and dramatic lighting.

(Note: you don't have to be afraid of including the sun in your shots, though perhaps don't keep your camera, especially a mirrorless one, pointed aimlessly at it. I expect the lens would act like a magnifying lens burning ants — but instead might be burning sensors.)

We use wide-angle lenses to encompass more area, more width or height, in a shot. Landscape photos are often made with wide-angle lenses for that reason. But working around helicopters, with their spinning blades, whipping winds, and dusting dirts (dirtying dusts?), the photographer is often at a distance from the machinery. It is one of the benefits of working with crews, like these, that are used to operating in close proximity to people, structures, and to each other. Being close allows wide-angle lenses to bring both broad vistas and the immediacy of putting the viewer closer to the action.

Glancing at the metadata for these images, the behind-the-scenes information about the camera and lens and their settings, here are some relevant facts to consider for future work:

The two cameras I shot have sensors the same physical dimensions as traditional 35 mm film; they are termed full-frame sensors.

I used two zoom lenses, each covering a different zoom range; one from 14 to 24 mm, the other from 24 to 70 mm. On a full-frame sensor, 50 mm is considered to yield an image that nearly matches what a human would perceive with their eyeballs.

Almost all of the images, above, were made with focal lengths from 14 to 28 mm, with a single 36 mm example, and one (the HEC image with the lineman reaching out to a traveler) at 48 mm. Even that, though, is comparatively wide-angle for an air-to-air shot.

I had the great pleasure of being the guest of Phillip Smith and his Rotor Power crews. Everyone was enthusiastic and accommodating of my intrusions, and it shows in the range of great photos I came back with. I'll be shooting in Georgia in a few days, where two operators will be slinging around some of the most exciting bits of machinery every attached to a helicopter — helisaws!