I have noted, several times in previous articles, that photographing people at work is a satisfying endeavor and the results are often particularly eye-catching because we, as humans, are drawn to watching other humans intent on their work.

Photographing objects without humans in the frame is usually less spontaneous, but has its own rewards and applications.

So let me speak to a sort-of combination of those two — photos of people, and photos without people. The distinction I'll be making is in the prepositions found in those two phrases: "of" and "without." The latter is a photograph with people but not of them; people serving, as would be termed in the film industry, more as background players (what many have called "extras"): they are there to add to the environment, not as the star.

I'll try to keep this short, but no promises. 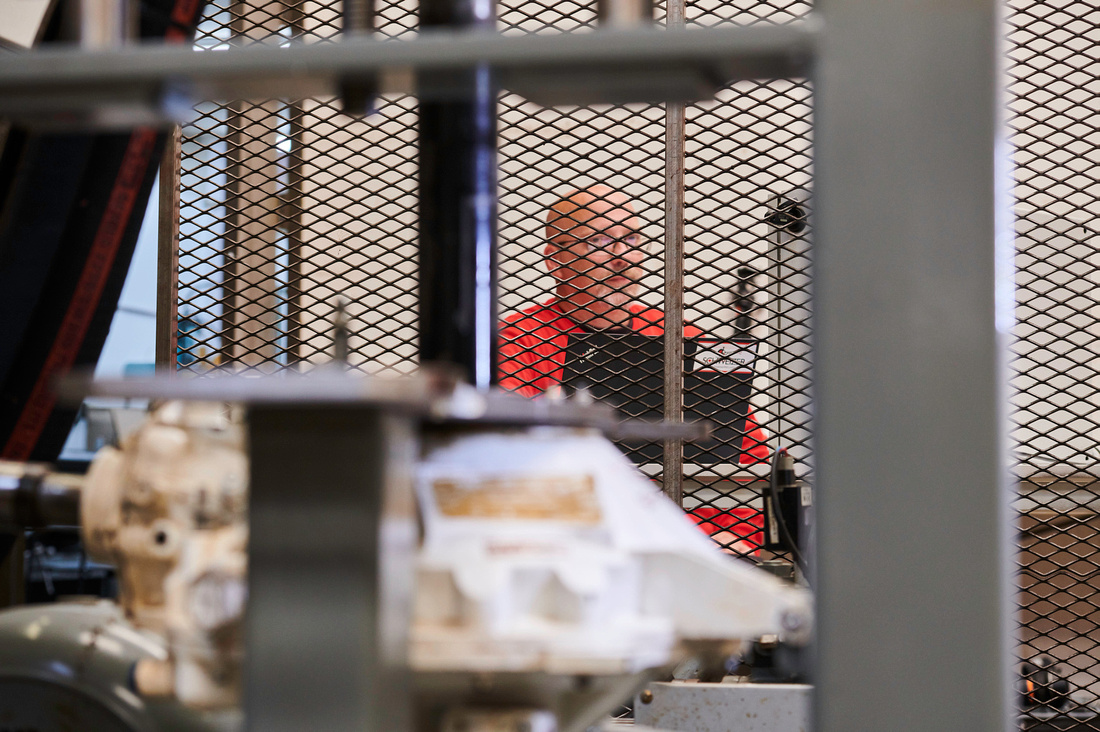 Let's start with this photo, to illustrate what I'm not going to be showing, and why. Notice how, despite there being plenty of other objects in the frame, putting the optical focus on the person makes this a photo of a person. 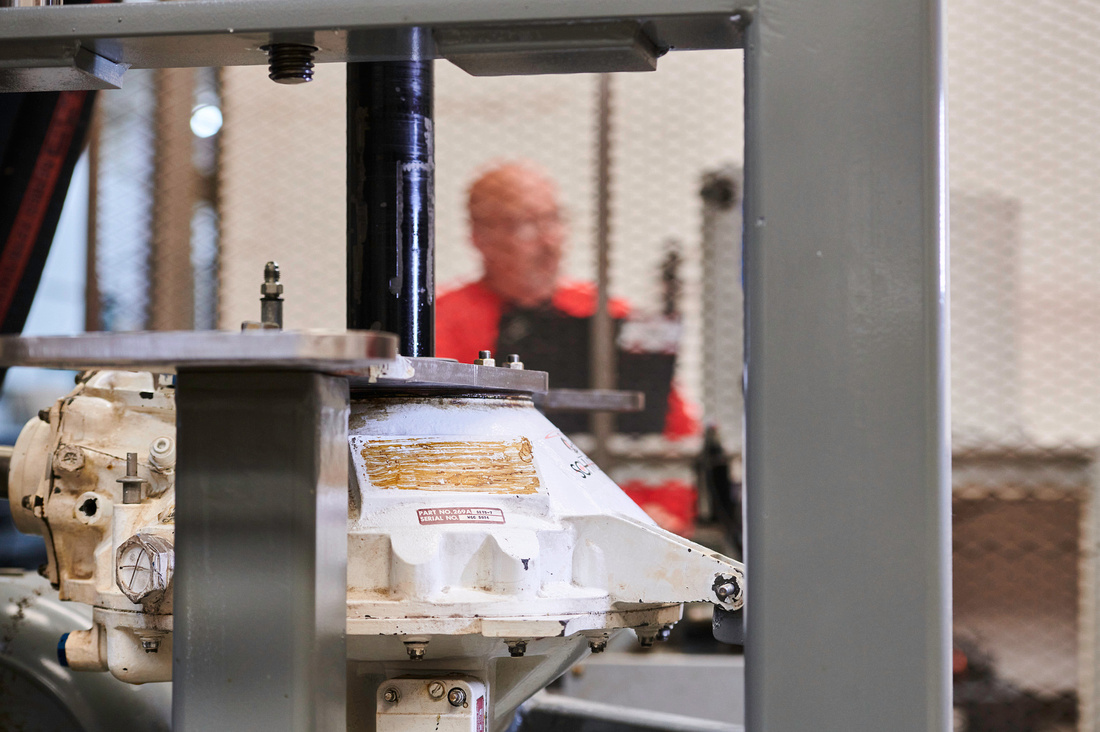 Instead, when I put the optical focus on the helicopter transmission in the foreground, we can still see the person, but it has become a photo about a transmission. We know there's a person there, somehow related to the transmission (they are testing it), but we also know the photo isn't about them.

It may be a subtle difference, but it is also an obvious one. (Can something be subtly obvious? I'm saying "yes.")

So, why not just show the whatever-it-is all by itself, if that's the focus of the photo? Well, including people in these images shows that humans are involved in the operation or maintenance of the whatever, or they give a sense of scale to the scene, or perhaps they just add life, metaphorically, by showing it literally.

That transmission is in the test stand at Schweizer in Fort Worth, Texas, by the way. 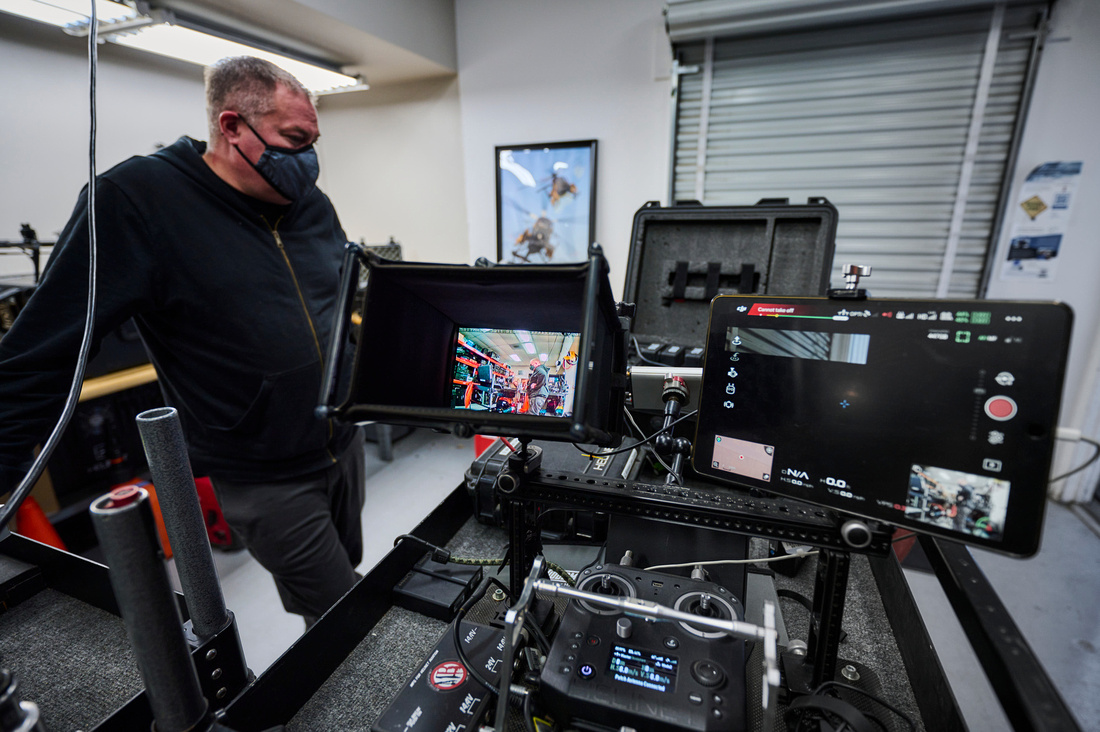 Because you're likely seeing this image rather small, the out-of-focusness of everything but the central monitor screen is not obvious, but everything except that monitor is, indeed, not in focus. Still, even when we don't perceive the out-of-focusness, we understand that the equipment is the star of this show and the man is there for some related purpose, but in a supporting role. The man's mask also help de-emphasize his importance.

And if only the image were larger, you'd figure out that the camera pushing the image to the monitor is beyond the man, under that blue poster in the background, looking back toward him. Plus, even smaller in that display can be seen yours truly pointing my camera toward that camera, which is looking at my camera, and … well, that's enough of that!

This is the drone shop (my term) at Helinet, in Van Nuys, California, a company that flies a lot of helicopters, but is not being left behind by remotely piloted vehicles either. 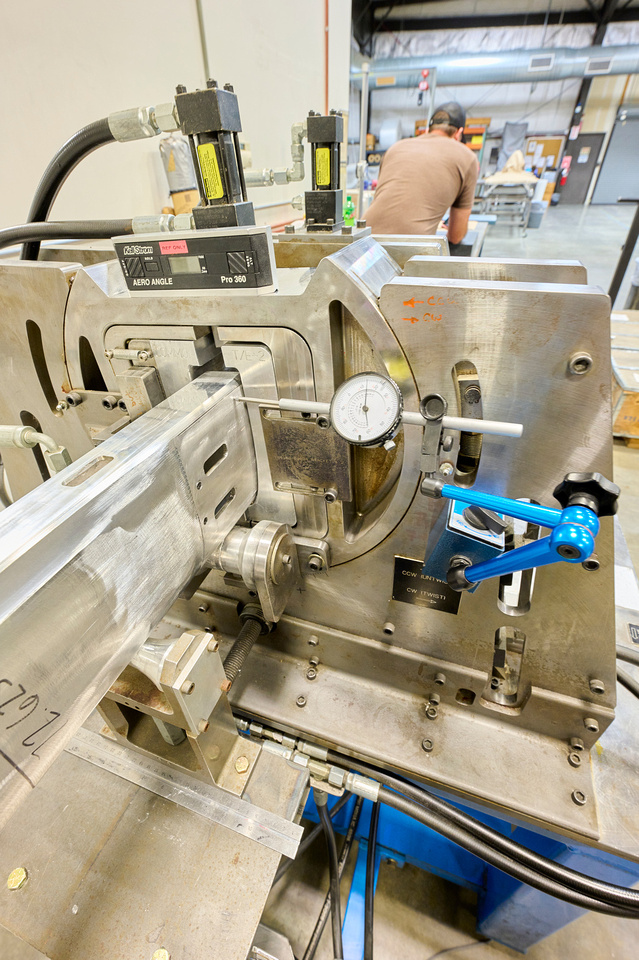 Here's a scene similar to the first one — techno-machinery stuff in the foreground, someone doing something to or with the machine in the background. That person is only a little out of focus, but by facing away from the camera, they don't demand our attention. We know what in the photo is the subject, but including a person, even from the back, breathes something into the photo that would not be there without them.

For your techno-information, this machine imparts a twist to tail rotor blades being made by Erickson, in Medford, Oregon, and — by the way — the guy is actually on his break and just trying to hook up his phone to a Bluetooth speaker. He asked if he should move, but I told him, "naw, just keep doing your thing," for exactly the reasons I'm describing. 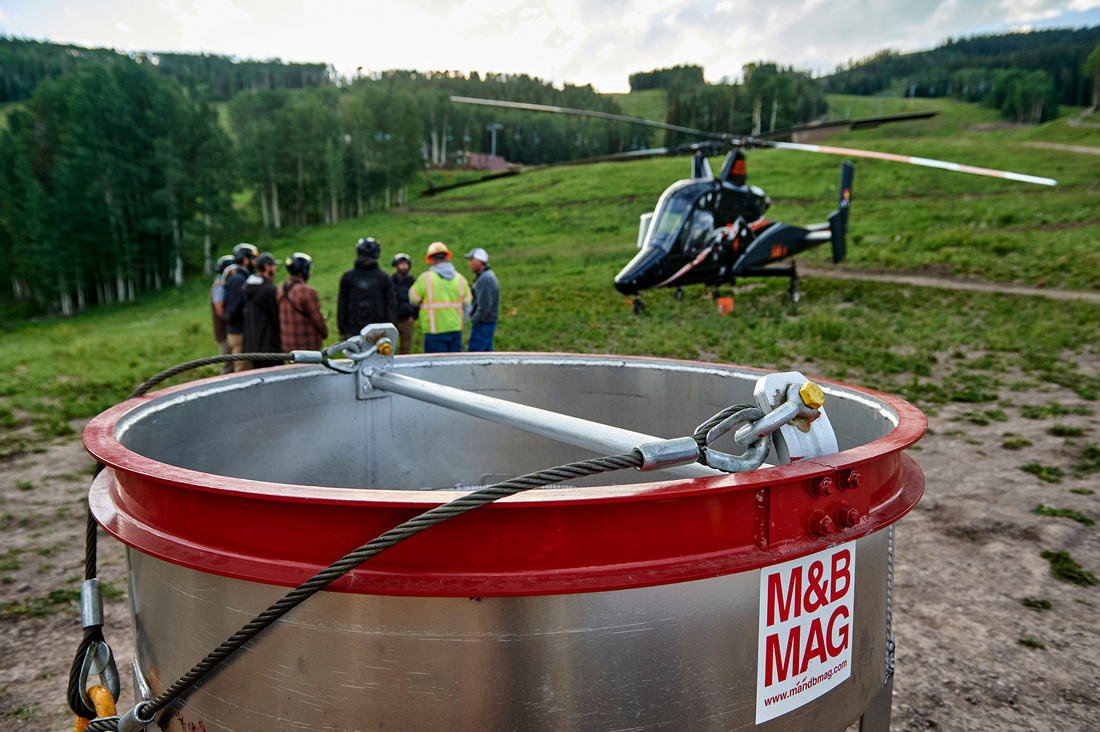 Flight and ground crews discussing the coming day's work — lifting and delivering concrete in this big bucket — wherein by focusing on the bucket, I've put even what might have been considered the main attraction, the helicopter, into a mere supporting role, photographically. Technically, the "face" of the helicopter is toward us, though most of the people's are not.

Mountain Blade Runner, of Montrose, Colorado, would be doing the lifting with their K-MAX, helping build snow-making capabilities on the slopes of Telluride. 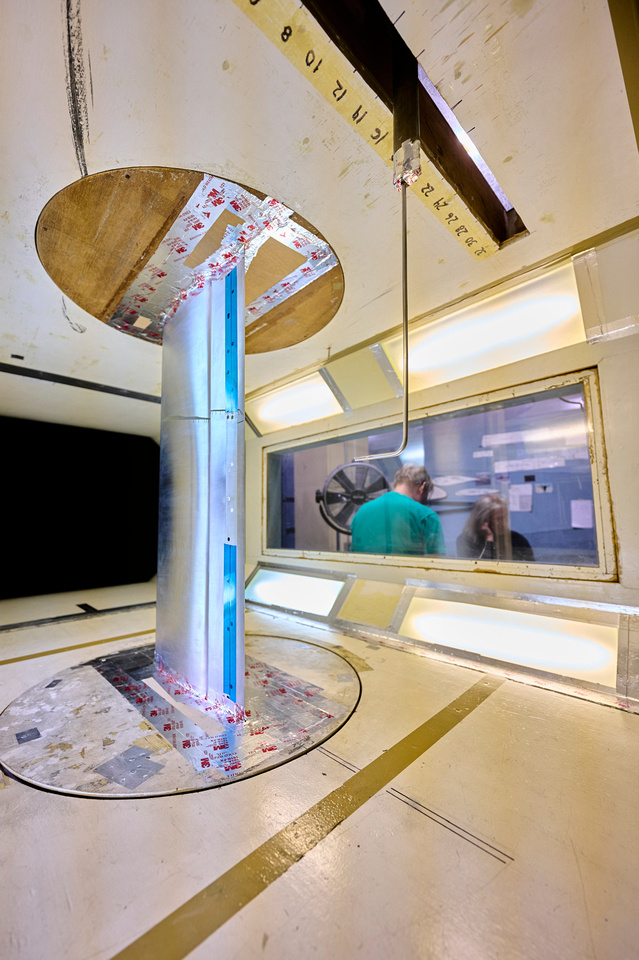 A wind-tunnel article front and center (well, front and off-center), in focus; airfoil designer and test engineer, out of focus. Subject understood, people adding life and context without hogging the limelight.

This is the wind tunnel at Penn State University, with Dan Somers, airfoil designer, in the green T-shirt, and Mark Maughmer in black. Notice how, in the previous examples, the people are not just out-of-focus, but relatively small in the frame compared to the intended subject. Showing the people small, in the frame, is another tool for reducing their importance in each image. What if we change that up a bit? 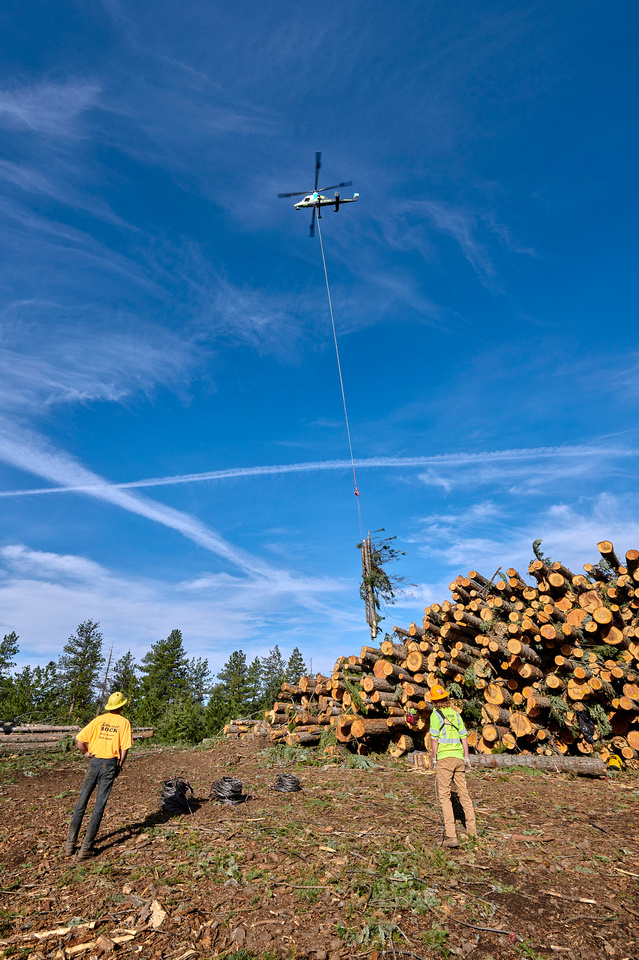 The people are not large in this photo, but they are at least as large as the helicopter. And they are in focus. And closer to the camera. And in high-viz clothing. So many elements of their presence would seem to support their being the subject, yet there is no question that they are not the subject. They are definitely part of the action; part of the scene; but the star is the helicopter.

Think of them as the waiter taking the hero's order in a restaurant scene: they are near and in focus, and might even have screen time all to themselves, but we know they are just there because the script called for "waiter," not because they figure into the plot.

Okay, that's not respectful of waiters, nor of these choker chasers, what with everyone playing their respective important roles, but we know who the crowds came to see. In this case, we are seeing ROTAK flying a K-MAX in Idaho. (Yes, I photograph a lot of K-MAXes in my travels, thanks mostly to Kaman and to some of the operators.) 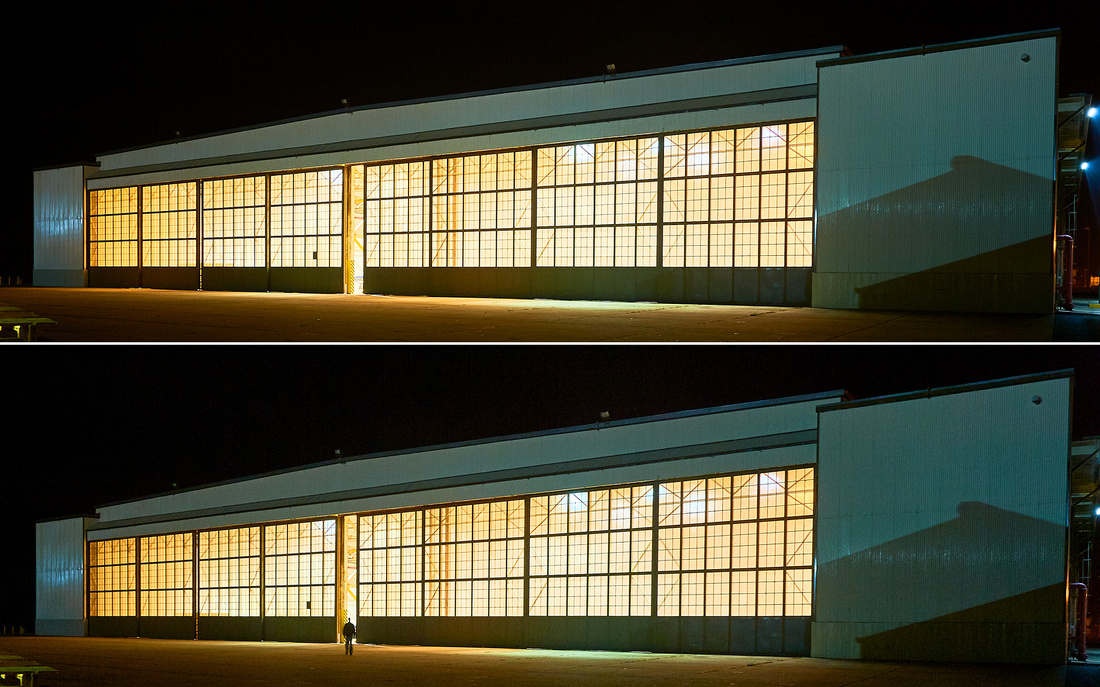 I'll finish up with another pair of comparison images, which again tells the story of how adding a person makes a photo different.

It was well before dawn when I headed over to where I'd be spending the day photographing for Sikorsky at Chase Field in Beeville, Texas, and started with some exterior shots. I'd made the upper image and, though I don't see a person anywhere in the frame, off in the darkness somewhere, I must have become aware of them heading to the building, because I waited and, 20 seconds later, made the lower image.

And what a difference the addition of that person makes. The upper image is fine. Well done. A competently-captured architectural presentation.

But the lower image is so much more.

The person is not really the subject, but they are important to the image, which has gained a moodiness by that simple addition. They give the building scale which, without them, we could easily assume it to be smaller than it actually is. And they give the image life.

People are often the reason we make photos, to show them at their work. But they can be important in images without them being the subject of those images. Keep that in mind, and make the decisions in composition and camera settings that allow people to play their proper role, even if it is a supporting one.

Of course, great thanks go out to all of the above people and organizations that asked me to come and make the images one, or both, of us needed.