The Frog in Your Hand

My cover story for the September 2022 issue of ROTOR magazine is about manufacturing helicopter rotor blades. The premise was: most people don’t know how they are designed and manufactured. My job was to slightly improve what most people know.* 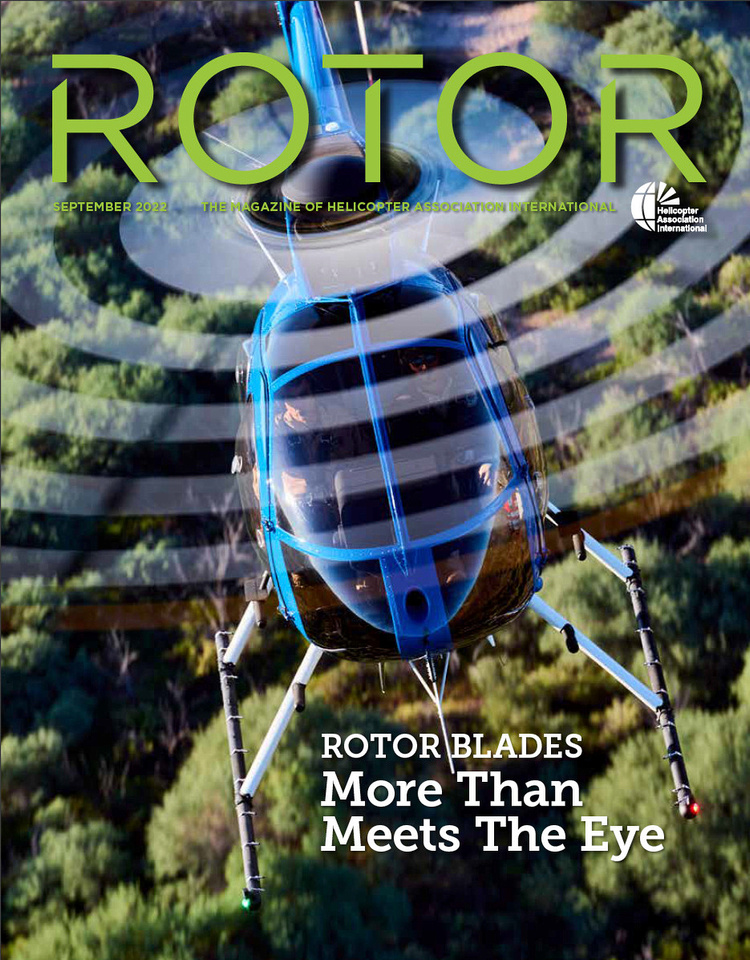 One of the photos in the piece prompts me to sing the praises of the “quickie” photo and the tool you might use to make it. (The cover photo, above, is not that "quickie.")

Why Not a "Real" Camera?

A fair question, especially to a professional photographer. Well, an event might pop up, unexpectedly, and your "professional" gear is not handy. Or, your phone is the only camera you have on hand. Or perhaps the professional gear is not yet set up or already put away, and it doesn't seem worth the effort to haul it (back) out. Whatever the reason, your smartphone might be just the thing.

So, let’s look briefly at smartphone photography, shall we? And I'll start by cautioning you that using a smartphone does not absolve you of the responsibility of making a good photo. 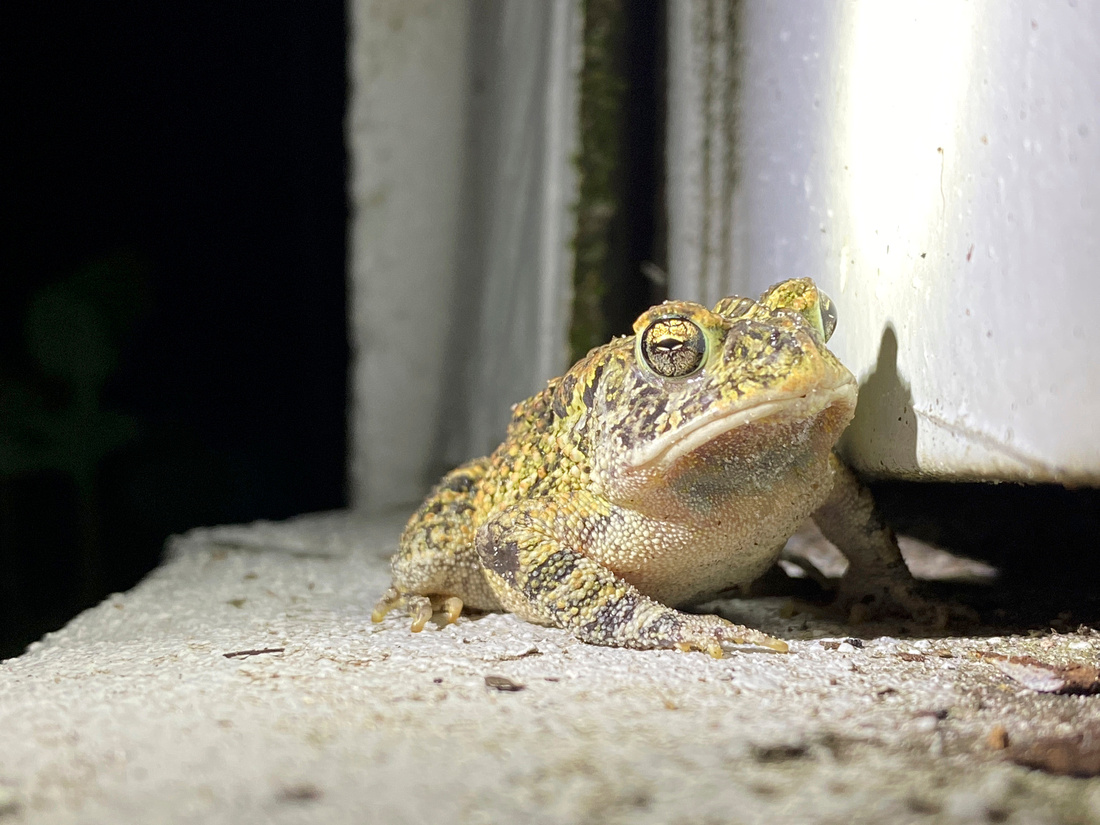 This frog (or toad?) was on the door sill at my aunt's house in Orlando, Florida, which I would use as my base while otherwise traveling the state for a story about helicopters in mosquito control. I was arriving late at night and, with no street lights or house lights on, was making my way to the back door with a flashlight. Seeing this little creature, I crouched down to her level then aimed my flashlight in from the left. I did not stand and photograph looking down from the top of the scene. And once at her level, I did not turn on the camera's flash and blast her in her face.

If I had photographed from my standing eye level, she would have been small in the frame and the concrete step on which she rests would have been also in focus, to no positive value in the composition. And if I'd used my smartphone's flash, the hard, head-on light would have been unflattering and overpowering on the toad, with the light falling off (becoming dimmer) very quickly with distance.

When Once is All You Get

I was walking down the hall of our offices when I noticed this image formed on the frosted glass door to the conference room. It is the projected silhouette of a visitor, a man we'd known for several decades, the inimitable Jeffrey Pino. He had been a colleague, then, as president of Sikorsky Aircraft, a client and, at this juncture, a client with yet another aerospace company, XTI. 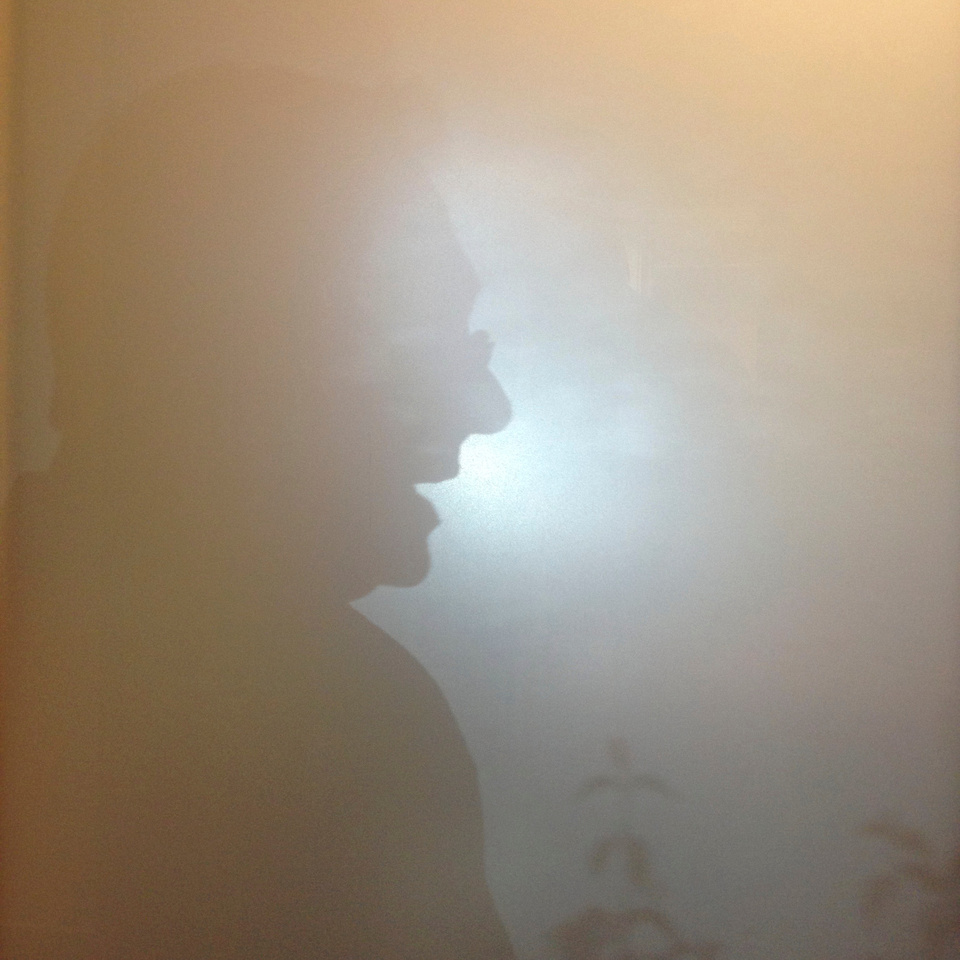 The sun was reflecting off a parked car's windshield, directing its rays through a conference room window, casting this silhouette on the frosted glass of the conference room door. With smartphone in hand, I framed and shot. Ethereal, anonymous, and a bit misleading with the stems and leaves of a plant outside the window — six feet closer to the windshield than is Jeff — neatly projected alongside him. Nice!**

In neither case, the toad nor Jeff, did I need the photo. They were quickies I made because I found them interesting, then made sure to make interesting photos using the tool at hand: my smartphone.

The Good Gear's Not Handy

Sometimes a setting or event are noticed when the good gear is safely ensconced in its bag or case. Something is worth capturing, but it's not worth waiting to pull the gear out, or you're wrapped and the gear's packed and, only then, notice a little something you might find useful. 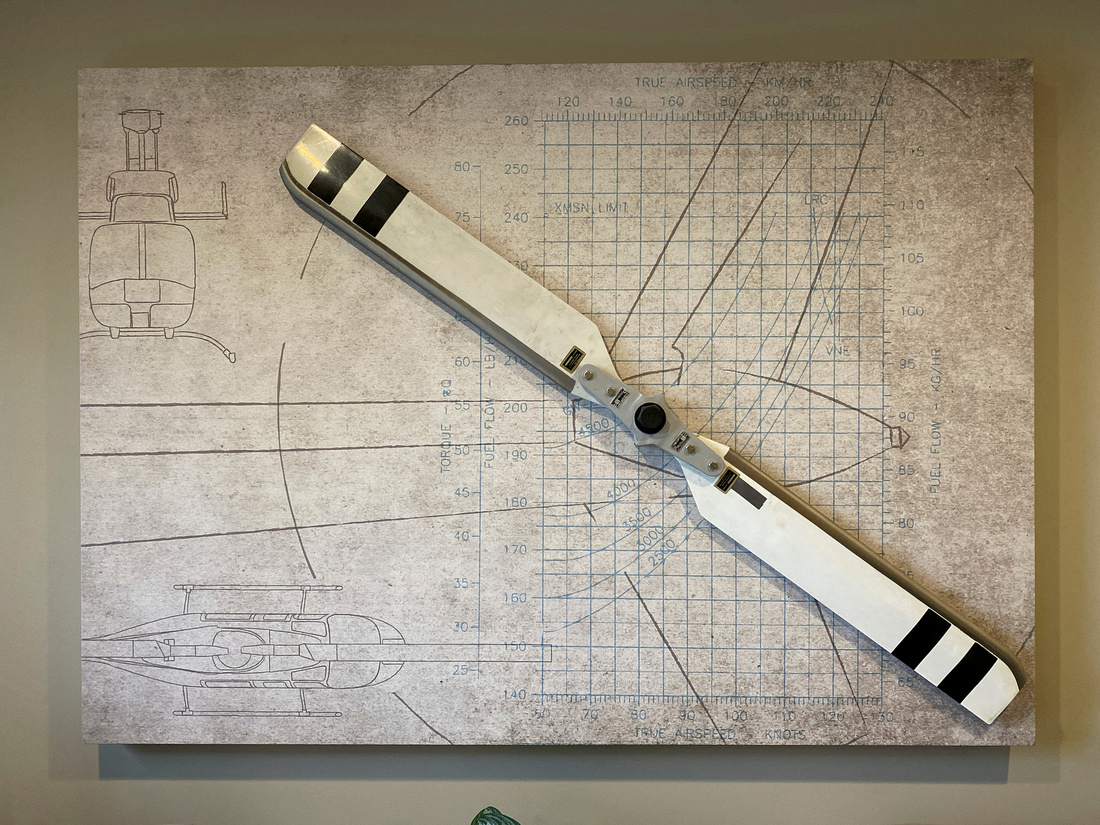 This wall decoration is near the front door of Van Horn Aviation's offices in Tempe, Arizona. They are one of the companies I visited for the rotor blade piece and, with my regular gear packed and me headed out, I stopped and put this into pixels with my phone. I didn't end up using the image, but notice that I framed it square and, despite the low light, I made sure to hold the phone very still — so, no slight motion blurs which are common with slow shutter speeds. (Obviously I could clone out that bit of plastic office plant at the bottom, but haven't yet needed to.) 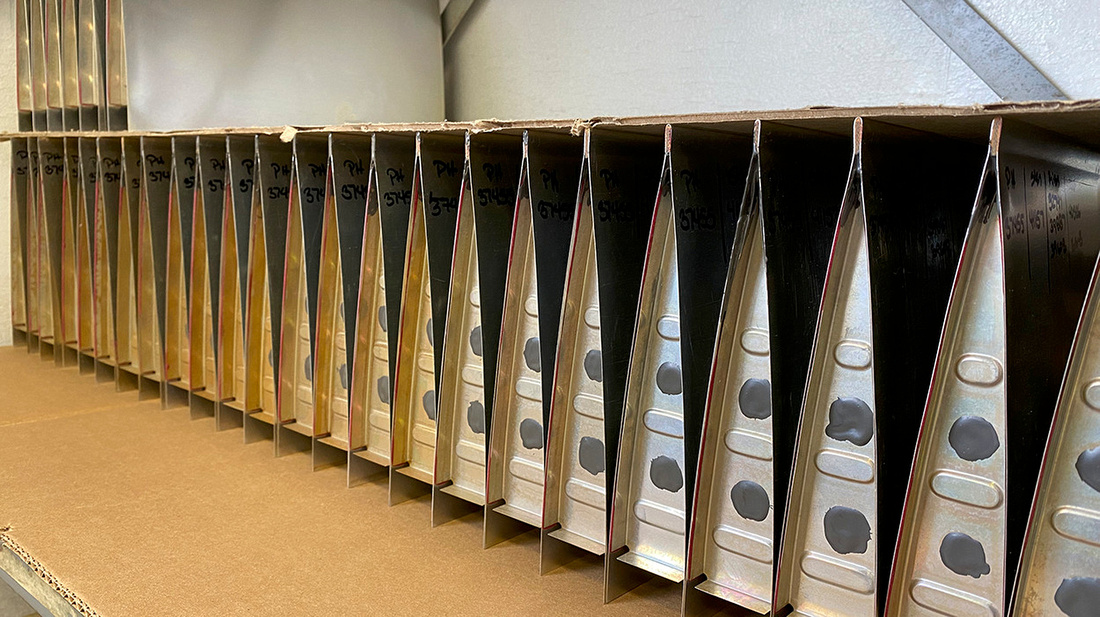 Here's the photo that I shot with my phone that did make it into the photo essay. These are components of the main rotor blade made by Vertical Aviation Technologies in Sanford, Florida, which I noticed after my regular cameras were already packed and in my car — I was double-checking that I'd not left any gear behind when I noticed this shelf full of parts and realized I had not captured them close-up. I photographed them from a couple of angles and chose this one for its energy and range of details.

Here's the two-page spread in which the image appears. It serves its purpose of indicating the company makes lots of blades. (They also make the helicopter onto which the blades are attached, but that's another story.) 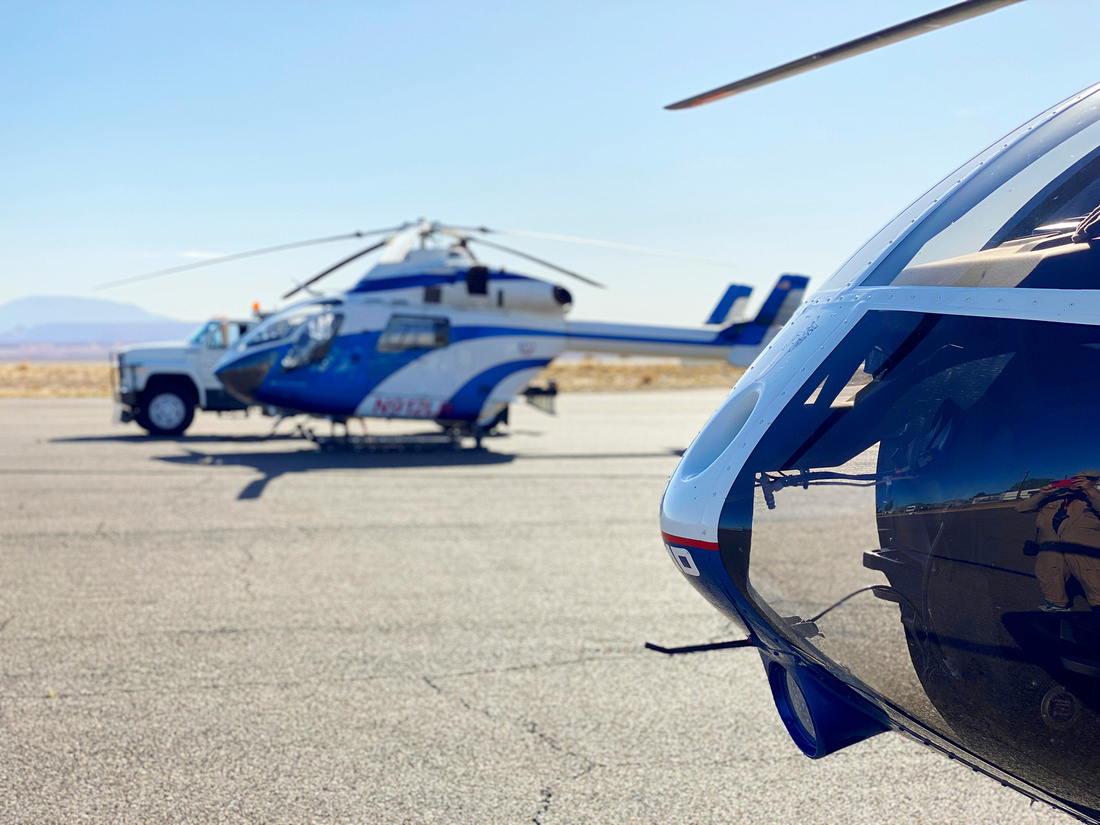 I flew with manufacturer MD Helicopters from their factory in Mesa, Arizona, to Monument Valley, along the northern edge of the state, as the company delivered cleaning supplies to the Navajo Indian Reservation during the COVID pandemic. The reservation is remote, and the people were suffering badly due to poverty and the low availability of medical care. MD Helicopters flew nearly every week for a year, at their own expense, delivering not just supplies, but PPE and medicines and, in their first couple of flights, chain saws!

The company helped not for publicity, but because it was a thing they could do to make the world better.

The subject here, however, is the photography. While I brought along the cameras and lenses and gyro stabilizer for the air-to-air photography, during a fuel stop in Page, Arizona, that gear was safely stowed in the aircraft, but I grabbed a couple of candids with my smartphone.

What you'll notice is how the near aircraft is in focus while the far one is not. As you might have experienced, smartphone cameras often put nearly everything in focus, especially in bright light. Because I didn't want everything in focus, I invoked the "portrait" setting on the phone, which purposefully keeps the near thing (typically the face of your subject) in focus, and the background out. Of focus. 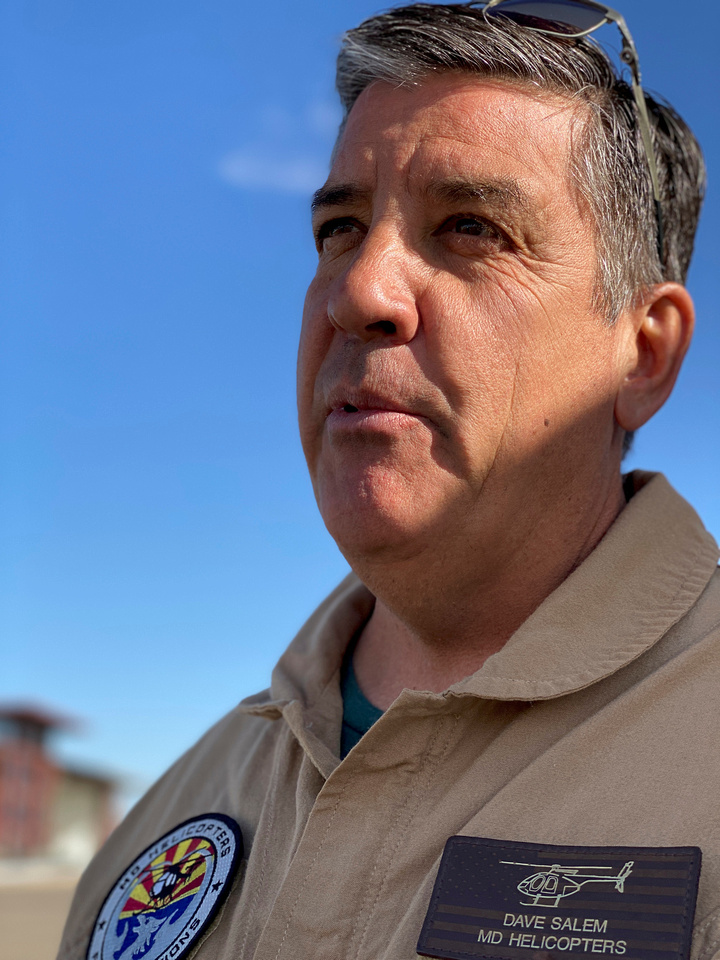 Here's another candid — the pilot of one of the two helicopters, Dave Salem.

What's to notice about this image? The portrait setting was again employed, but also I chose to look up at him, framing Dave as a hero which, on behalf of MD Helicopters, he was. To learn more about shooting the hero (not what it sounds like), my article on that topic shows the why, the how-to, and the how-not-to. Plus, I just noticed, it ends with a photo from the same trip to Monument Valley!

Love The One You're With

Sometimes your smartphone is the only camera on your person because it's the only one you wanted, even though your intention was photography. Despite their limitations, smartphone cameras can do good work — though you still have to work at it. 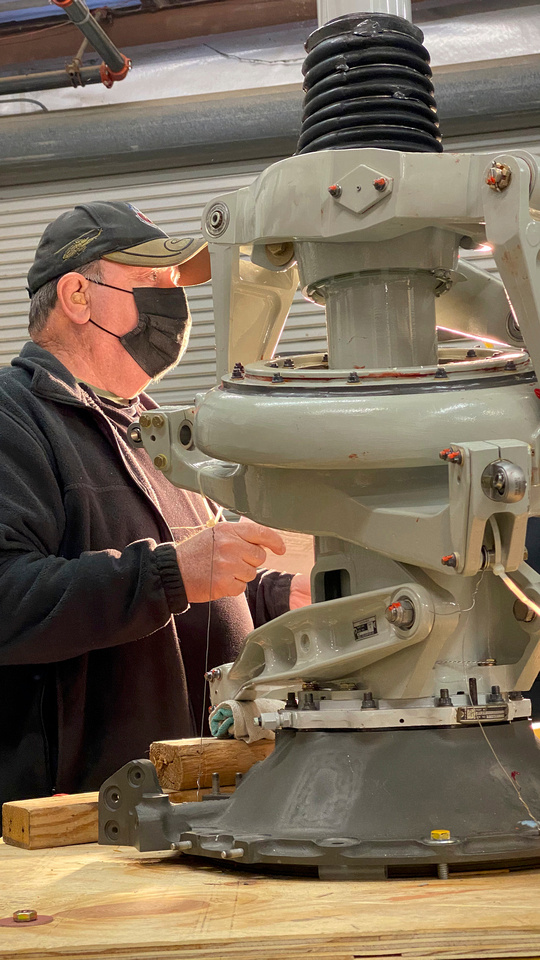 For a couple of years I volunteered with the Army Aviation Heritage Foundation at the local chapter here in Arizona. My duties fit my abilities, which meant graphics (promotional cards, certificates, banners), videos (marketing) and photography. Sometimes that last realm was handled with just my smartphone, as in the above.

This member, Bob Warner, was working on the Huey helicopter, one of several aircraft owned by the group. At times I'd just flit around the hangar, indoors or out, and capture the men and women at work. But as I stated at the top, just because the camera is attached to a phone and a calendar and a game player, doesn't mean you can ignore good photography.

I like this photo because it plays around with what is important in the composition. Is it the main rotor mast with swashplate, in the foregound? Well, sorta, since it is near and in focus. But Bob is a human, so our eye is naturally drawn to him. Plus there is strong lighting on him which, whether Bob or a box of Brylcreem, strong lighting in the midst of weak lighting will always grab your attention. 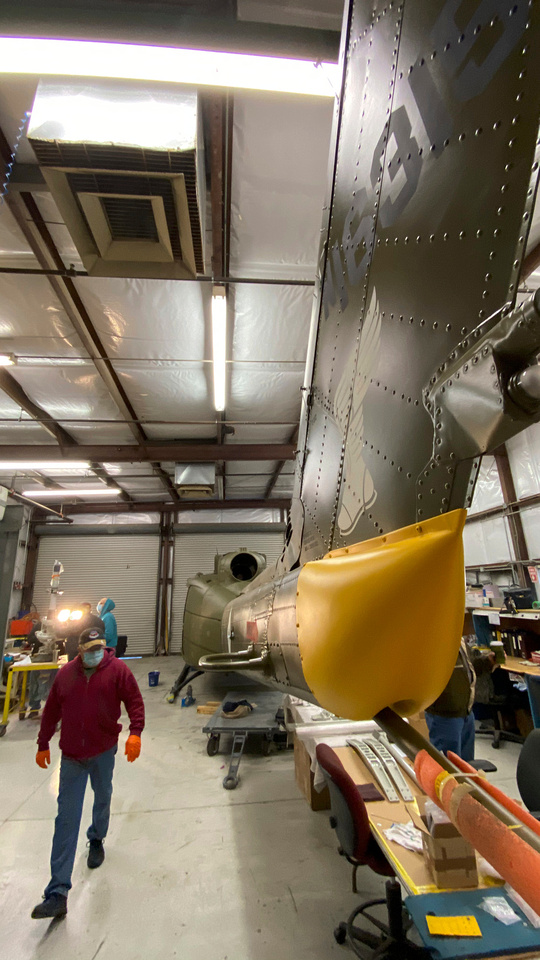 Another candid at the hangar. And another photo playing with "what, exactly, is the subject here" question.

Though this volunteer is relatively small in the frame, being a human he, again, draws our eye, helped along by the bright light just above (though far beyond) his head. Thus, despite the vertical stabilizer being large, in focus, and full of little details, our eye immediately darts to the human, then maybe to the guy in the turquoise, near the light (though it doesn't linger there because we find so little information), then over to the vertical, where we try to read the number then, ooh, look at this big yellow bulbous thing, then back over to the human.

If I had centered this guy in the composition, we would have not lost his importance ("oh, he's in the center of the shot — he's the subject, right?"), but everything else would have been secondary and only partial (on the left, out of frame, is the side of the paint booth). Look at the center of this image — there's really nothing of import there. By composing the way I did, there is interest in the several subjects and there is order to the information. 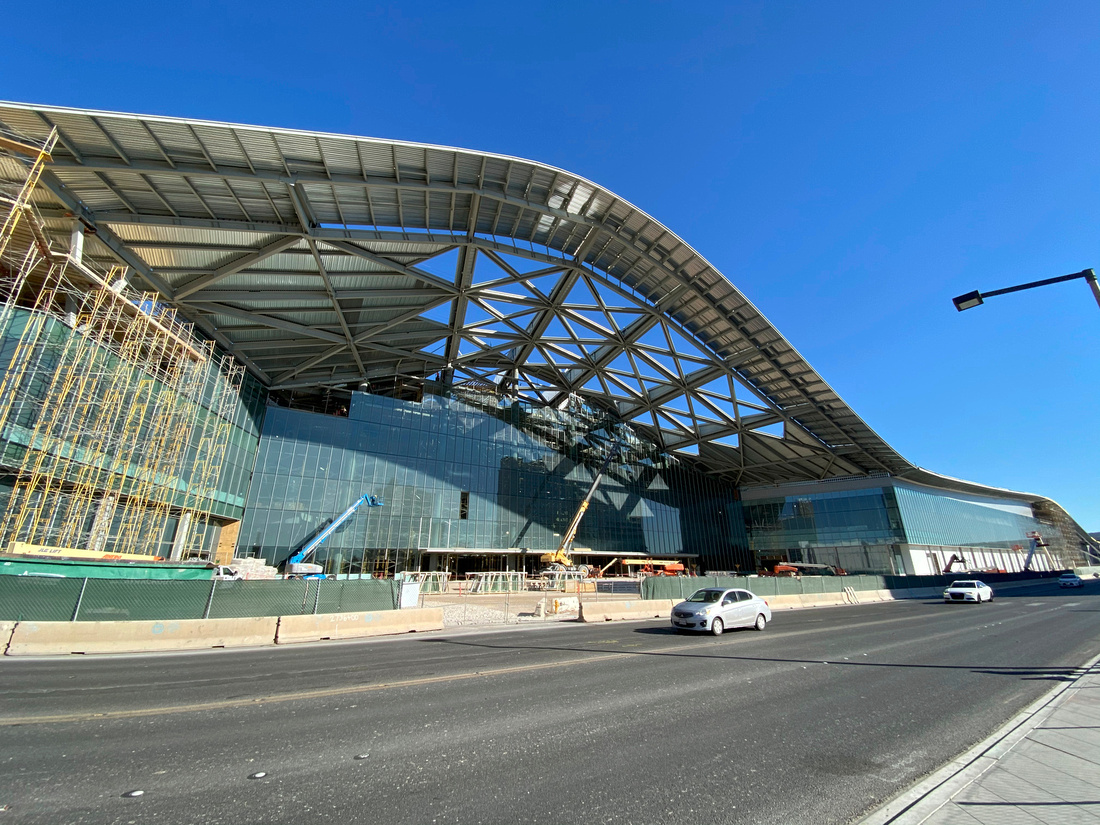 Alaska-based operator ROTAK Helicopter Services asked me to capture images of their putting over 80 large fans on top of the Las Vegas Convention Center expansion, the West Hall, that was under construction. I arrived a day early, took only my smartphone, and scouted the perimeter of the site, which is huge, looking for possible vantage points for photography. The above is the south entrance, and it caught my eye. 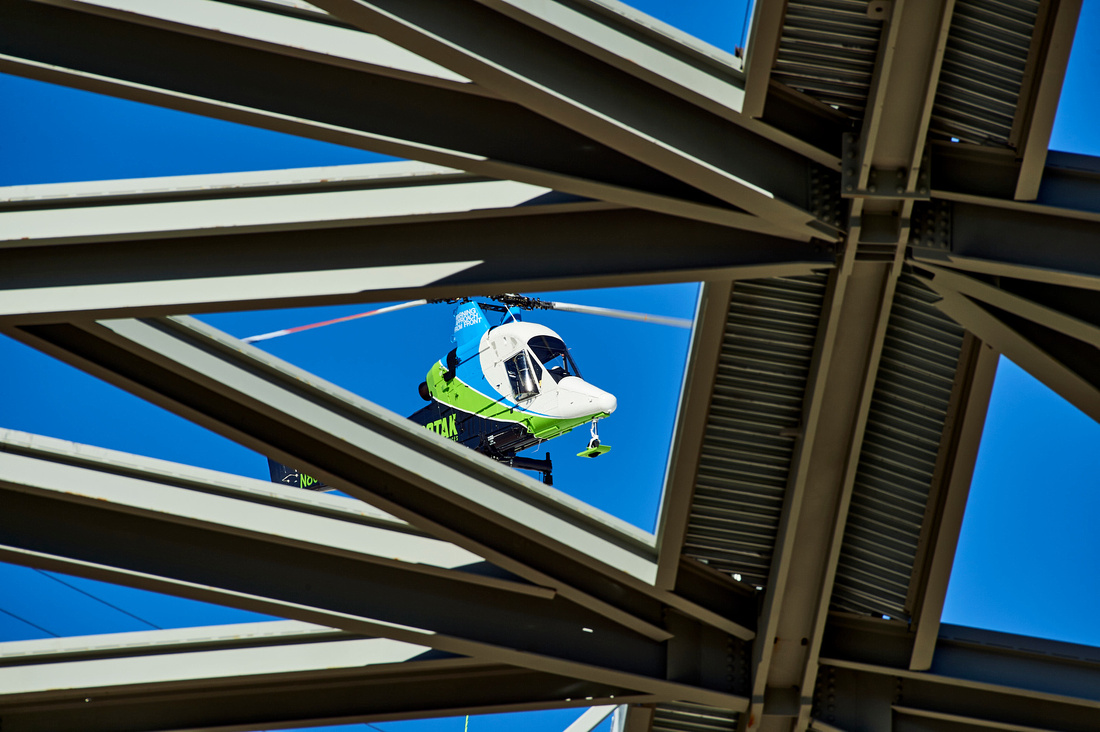 The next day, among the nearly 3,400 frames I shot of their K-MAX lifting and placing and lifting and placing, mostly shot on the roof of the building, I managed to catch a few frames from that street-side location using my regular camera and a long lens.

As the oft-quoted saying, in manifold variations, goes: the best camera is the one you have with you. If you've got your fancy-schmancy digital camera with envy-inducing lenses, well, good for you. But sometimes, when the need arises, you won't have that gear with you, or it's packed away, or you went without it on purpose. In that case, indeed, the best camera will be your smartphone.

But fancy-schmancy or the thing in your pocket or purse, you have to use good technique and compose with care. It's poor craftsmanship to do sloppy work just because it's just a smartphone.

If you're wondering what smartphone I use, and which fancy-schmancy cameras, I purposefully did not include them in the above because, as much as I really like my gear, the brand and model are not important to making good images.

* It’s a good-looking piece that even non-rotor-blade-purchasing people can enjoy here.

** Sadly, this is the last photo I have of Jeff; he perished in the crash of his P-51 just a few months later.