I am, as I write this, deep into producing a photo essay for a trade magazine about firefighting helicopters in Arizona. Sorting through the thousands of images I've already shot (and I'm not done yet!), I saw a few that gave me the notion for this article — I had "framed" people or aircraft within other objects in the image. You might wonder, "Huh?" then "What? Why?," while I wondered, "Do I have enough examples to illustrate this approach?"

As to your questions, well, I'm not quite sure what to do with "huh," but the "what" and "why" are answered below. 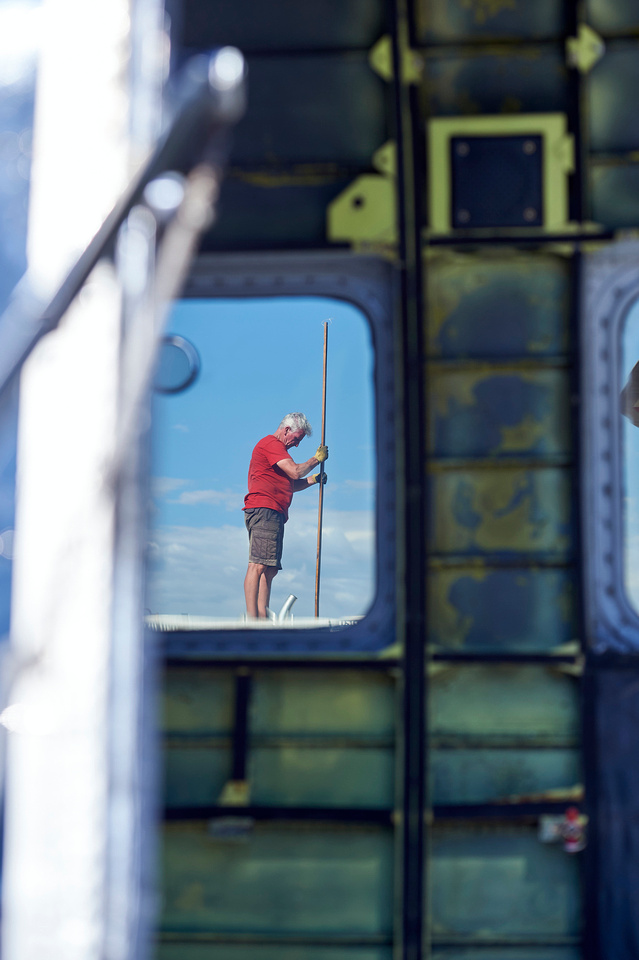 These first two images were made in Payson, Arizona, and involve an S-61N that was waiting to be called to a fire burning just a few miles to the west. Above, the fueler has climbed aboard the fuel truck, parked some distance from the helicopter, to check the level in one of the truck's tanks. This image illustrates the basic idea of framing — using elements in the composition to partially or totally surround the subject. In this case, I am looking through the open side door of the S-61, across the interior of the aircraft and through one of its windows. The exposure and focus are set for the man, the result being: the viewer knows exactly what the subject is, but is also treated to a bit of the environment.

I don't contend that a viewer would know the "frame" is a particular helicopter, or even a helicopter at all (though the circular vent in the window pretty much says "aviation"), but this is still a more eye-catching and interesting photograph than would be one of just the man holding a stick. It has more depth, literally, yes, but cognitively also. There's more to think about, and time spent thinking means time spent with your messaging. 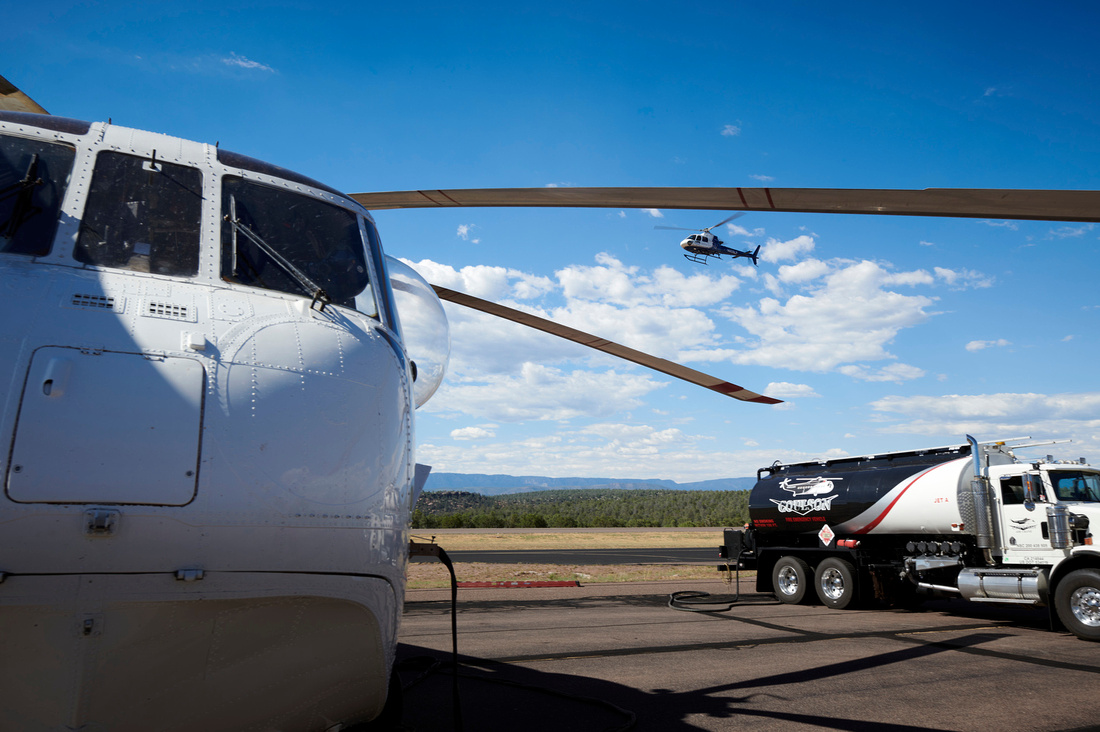 Using the same location and the same "framing" helicopter, the S-61N, I had noticed this AStar coming my way and prepared to capture it as it swept by. Rather than hustle out from behind the Sikorsky, I instead framed the AS350 within the 61's rotor blades. I may have other photos of the AStar isolated against the sky, but that approach yields "aircraft against sky," whereas this composition is about the broader story: aircraft in the foreground, fuel truck next to it, aircraft flying by, Mogollon Rim scenery beyond it all. Again, more depth, visually and conceptually.

Notice some differences in this example compared to the first — the subject is an object in motion (rather than a person), the frame is a visual confluence of elements in the composition, not an actual, fixed, aperture like the window through which we see the fueler, and all the elements in the frame are understood for what they are. Notice, too, a similarity — we know what the main subject is, despite that subject being relatively small in the frame, by how it is constrained within a larger composition. This technician at Fort Hood, Texas, above, is testing communications gear in a Humvee. Most of us might not recognize this as a Humvee, but if that were important to a story it would be shown or explained elsewhere. For this article, the point is how I've framed the technician with elements of the vehicle and gear. Only his face and portions of his headset are in focus, and except for the yellow wire in the foreground, his face is the most colorful area in the photograph. We know he's the subject. Now compare that image to this next one. 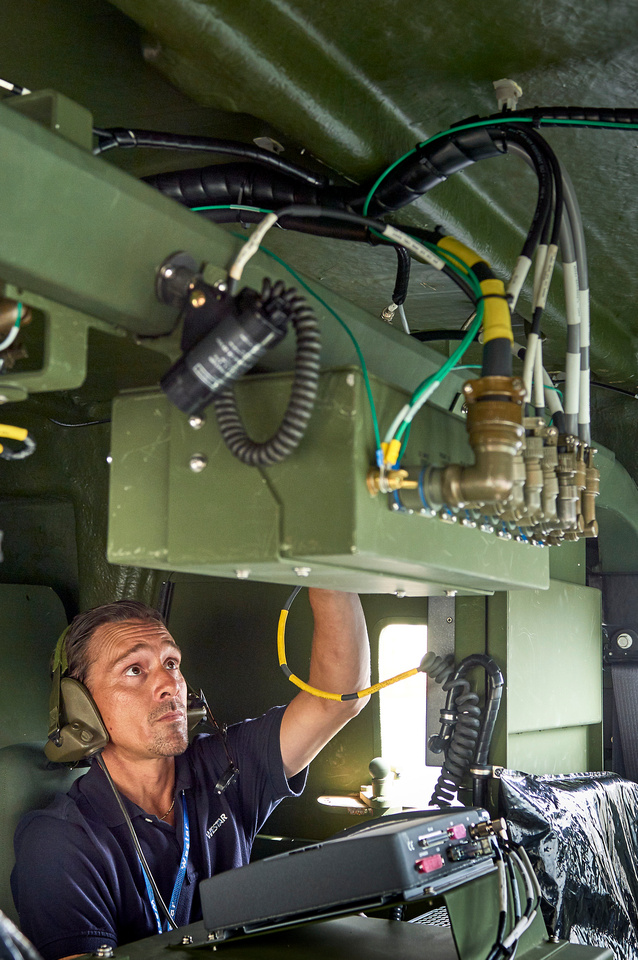 The framing now includes far more of the equipment and some of our attention is drawn to it, but as what we see of those bits of gear are cabling and their backsides (in particular, no controls), we still understand where our attention is intended — the technician. Providing a range of similar-but-different compositions gives a writer or graphic designer more options to tell the "story" as best supports your goals.

I certainly have many photos of the airmedical EC135, above, air-to-air, air-to-ground, and with both of us on the ground. In these two renditions, though, I opted to give a nod to the hospital by framing its name through the aircraft. Each is more visually interesting than a simple photo of that University of Tennessee at Knoxville Trauma Center signage and, as with the previous two, a range of compositions offers a writer or designer options. By shooting through the aircraft, I also tie the hospital to its aviation connection. (I suspect every example in this article is one of the several, or many, shots I made of the same subject. Shoot a lot — options are good.) 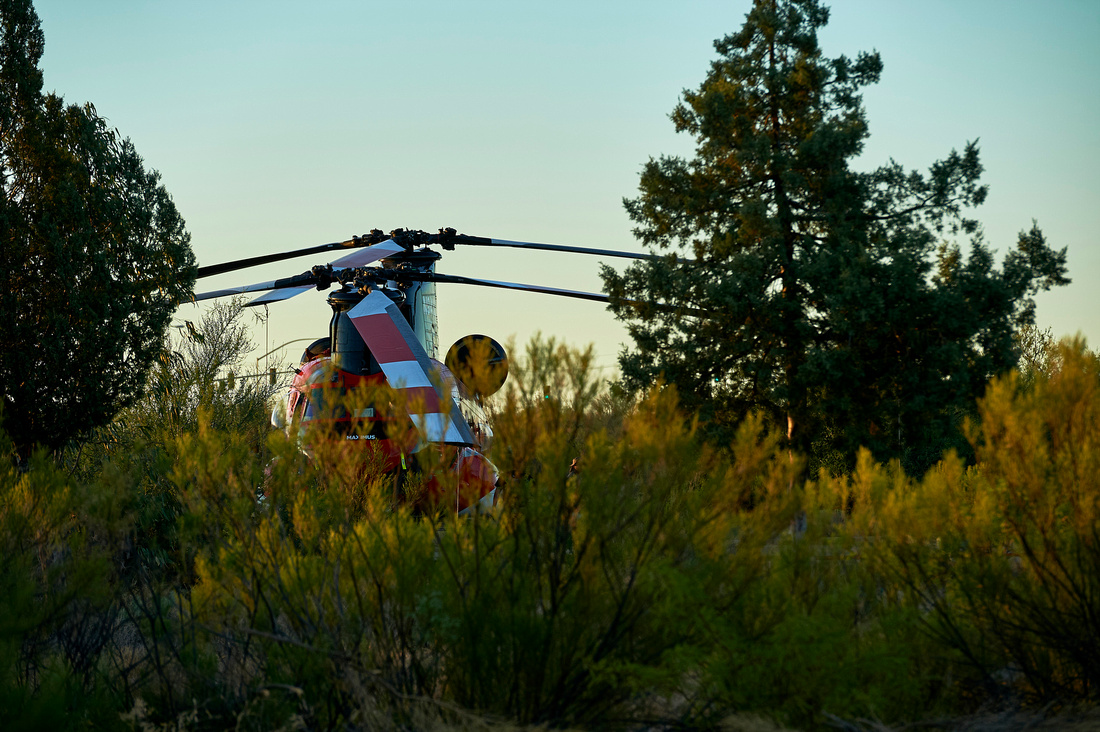 The Chinook, above, was parked at the end of a day on call for firefighting near Tucson. I chose this image to illustrate using foliage as a "frame," which suggests being located in the wilds of wherever. The sharp-eyed among you might notice the green traffic light smack dab in the middle of the image, giving the lie to this being too remote, but the overall sense is, indeed, of an aircraft parked in the "boonies" rather than in a 200-foot x 300-foot parking lot adjacent to a six-lane highway.

By the way, just because it is near a highway doesn't mean it, or the several other helicopters, and their crews are living the high life — they are occupying an abandoned boy's school, devoid of any extant buildings, its past life evidenced only by broken tile floors and concrete pads among desert plants and animals, including rattlesnakes. 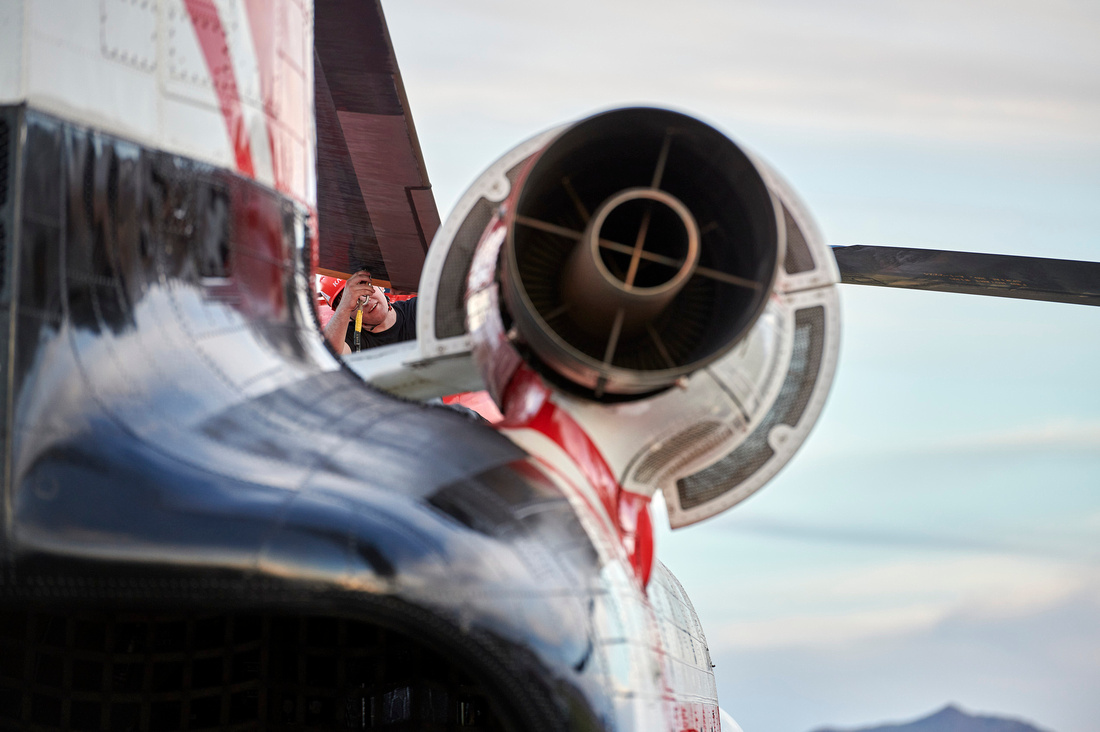 A different Chinook, a different location (northeast of Phoenix). This mechanic is securing the main rotor blades at the end of their day, also fighting fires. Like it was with the fueler, this person is framed by a helicopter, but in this case the framing is done by the aircraft on which the person is working. Also, unlike the fueler seen through the open door and the window of the S-61, most viewers in this industry would understand the aircraft type, even though it is mostly out of focus. 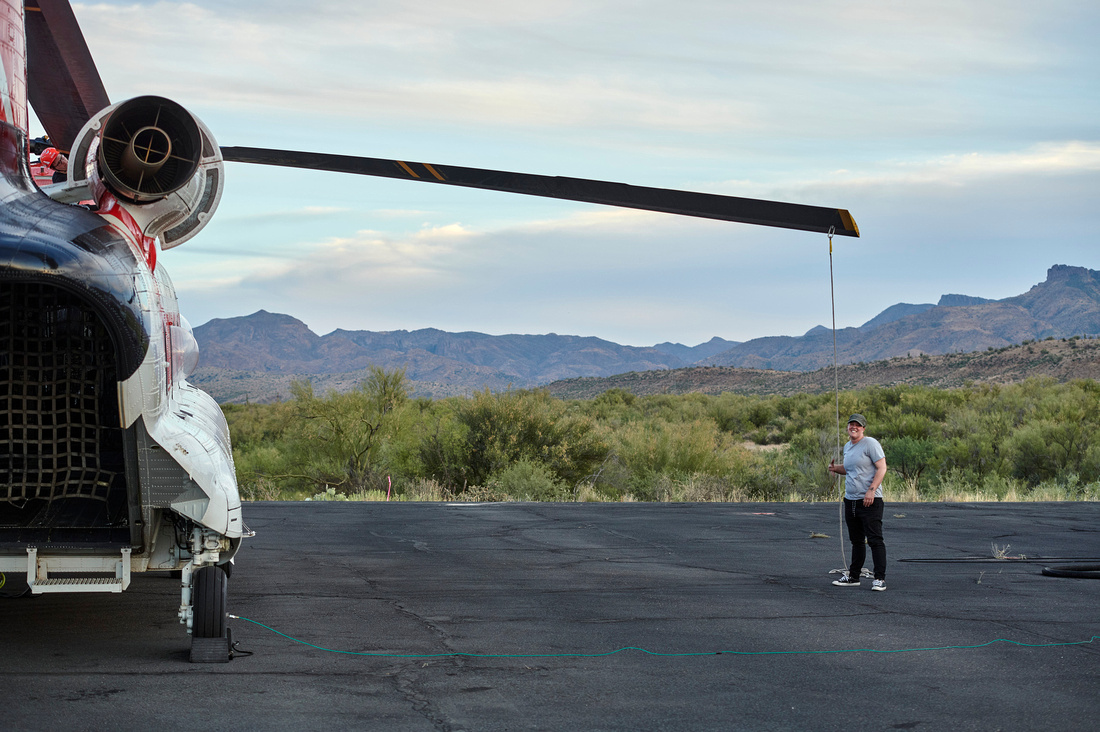 Once I'd captured a number of those "tighter" shots, I widened the composition to capture the woman holding the blade's tie-down rope but kept the guy on top in the shot as, basically, a little treat for someone who might notice him there. And if you didn't notice him then, well, the photo still works, even if the more obvious "frame" of rotor blade-rope-ramp-aircraft is enclosing just a bit of the scenery. I think when we first view this image, we are drawn to the woman smiling, but with his red helmet visible among all of those intricate shapes, our eyes are then drawn to the corner, despite it occupying but a small area of the image. Then our eyes dart back to the woman smiling, then back to the corner. Fun…and effective, by engaging the viewer for longer and, for some, a sense of satisfaction at "discovering" the guy in the helmet. 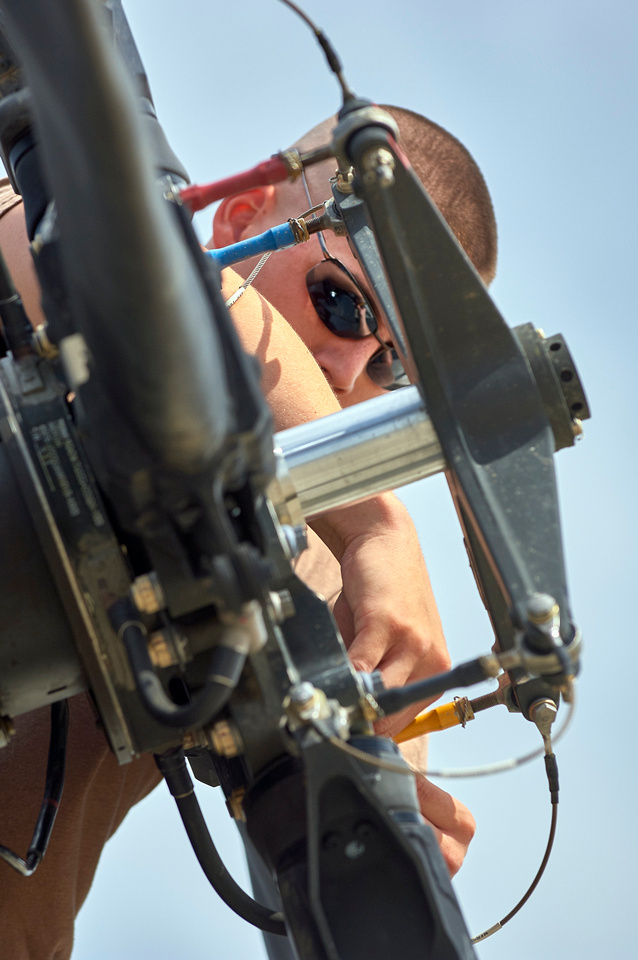 Akin to the maintainer securing the blades on the Chinook, this soldier inspecting a UH-60 tail rotor at Fort Hood, Texas, is framed by the aircraft on which he is working. In this example, though, we are closer, the person is visually larger, and the framing elements are at the tips of his fingers. The result is a more intimate feeling to the image. 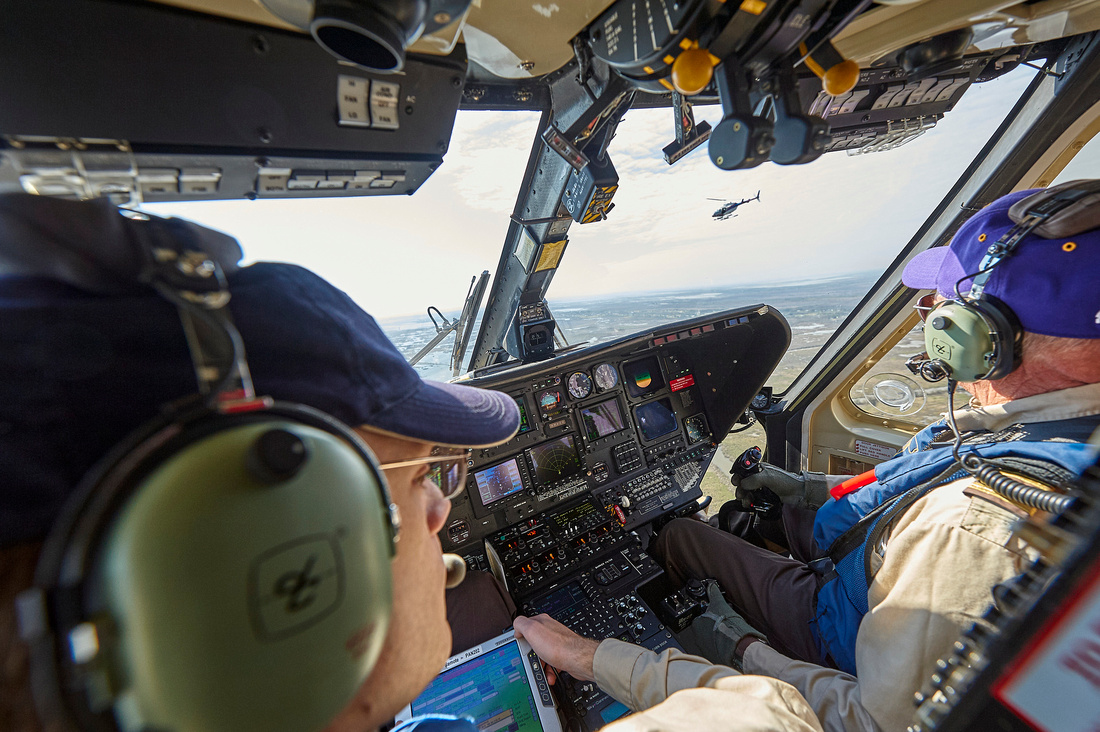 In an exception that proves the rule, the Bell 206 that is framed through the windscreen of this S-76C++ is not the subject of the photo, but does play its role in  giving the photo context: an air-to-air shoot where, for the moment, the video crew is in the Bell as we both head for the Gulf of Mexico from Houma, Louisiana. The details of the interior of this Sikorsky attract our eyes, but seeing the other helicopter lets us know we're out here doing something, not just flying.

I'll wrap up the "images" portion of this piece by circling back to the story I'm working on; firefighting aircraft in Arizona. This is a pilot and his AStar, which is equipped for, and assigned to, helitack duties. They each sit awaiting a callout from the San Carlos Apache Airport near the mining town of Globe. The Cessna provides both shade for the pilot and, in this image, frames for the pilot (strut-shade-chain) and the helicopter (strut-wing-fuselage). A two-fer!

The "what" of framing is visually placing the subject in the confines formed by one or more elements in a composition.

The S-61N through which we see the fueler in that first image is, as stated, not necessarily identifiable as such, yet the composition works because the subject is clear and the frame suggests an aviation environment. Showing just the fueler on his truck would not suggest aviation at all unless there were markings to make that connection.

In the close-up of the maintainer in the red helmet securing the rotor blade on top of the Chinook, he is obviously the subject while, despite being out of focus, the aircraft type is not in question.

The other Chinook is shown through trees and shrubs, which we understand to be trees and shrubs. The flora gives context while being, in terms of their particular species, unimportant.

There are other techniques or conditions at play in these photos — use of color, leading lines, depth of focus, where people in the photo are looking — that play into our understanding of the situations or actions above. The use of frames is, indeed, just one of the many tools at a photographer's disposal, one that works well with others.

The "trick," if we were to call it that, of creating a frame in photography is to remain open to seeing useful and appropriate ones, then acting on that recognition. Sometimes they come and go pretty quick, but they can give an image staying power.