I recently spent a week driving across much of the state of Florida in order to fly with a passel of governmental mosquito control organizations. I've whittled down the thousands of frames I shot to just 18 that will appear in a photo essay I wrote and laid out for the trade magazine ROTOR. Let me add that it was well worth the effort.

Those thousands of images also provide me the opportunity to share a lesson or two about aviation photography. In this article, that lesson is about shooting small to tell a bigger story.

You know what makes a great photo? How about big, bold, right-in-your-face, lots of color and action? That'll work, right? 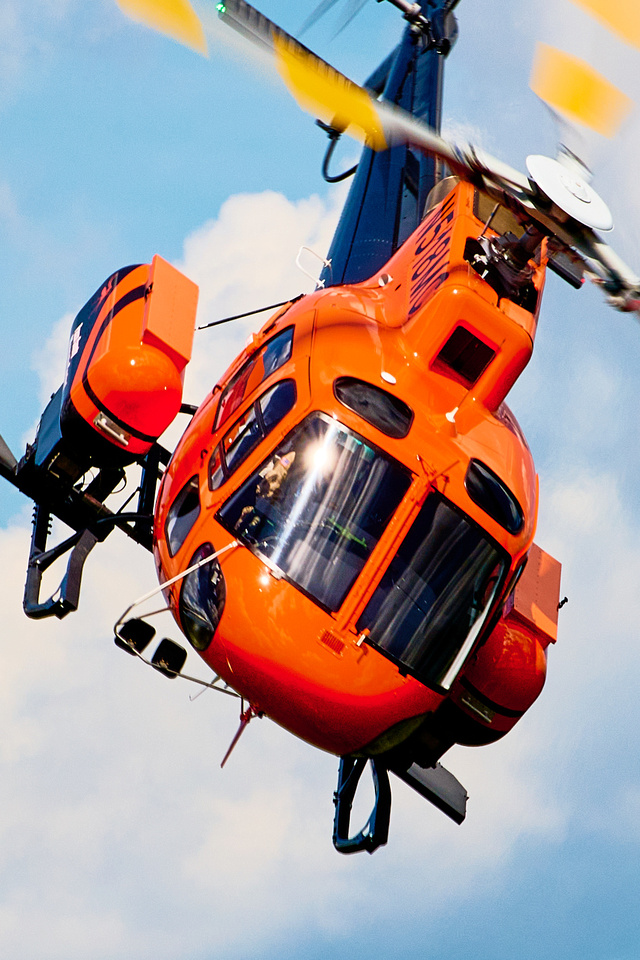 Absolutely that'll work. And if you're needing to grab some attention, that is a good way to do it.

There's something kinda small about filling the frame with aircraft, though. In making the aircraft so large, the story — the application, the environment, the world — are made unimportant. Or just plain absent.

So, How is Small Big?

Grabbing attention is not the only function of photography, so coming back from an air-to-air mission with only right-in-your-face photos leaves some functions out of the running. Sometimes, you need to show the subject small so you can tell the bigger story. 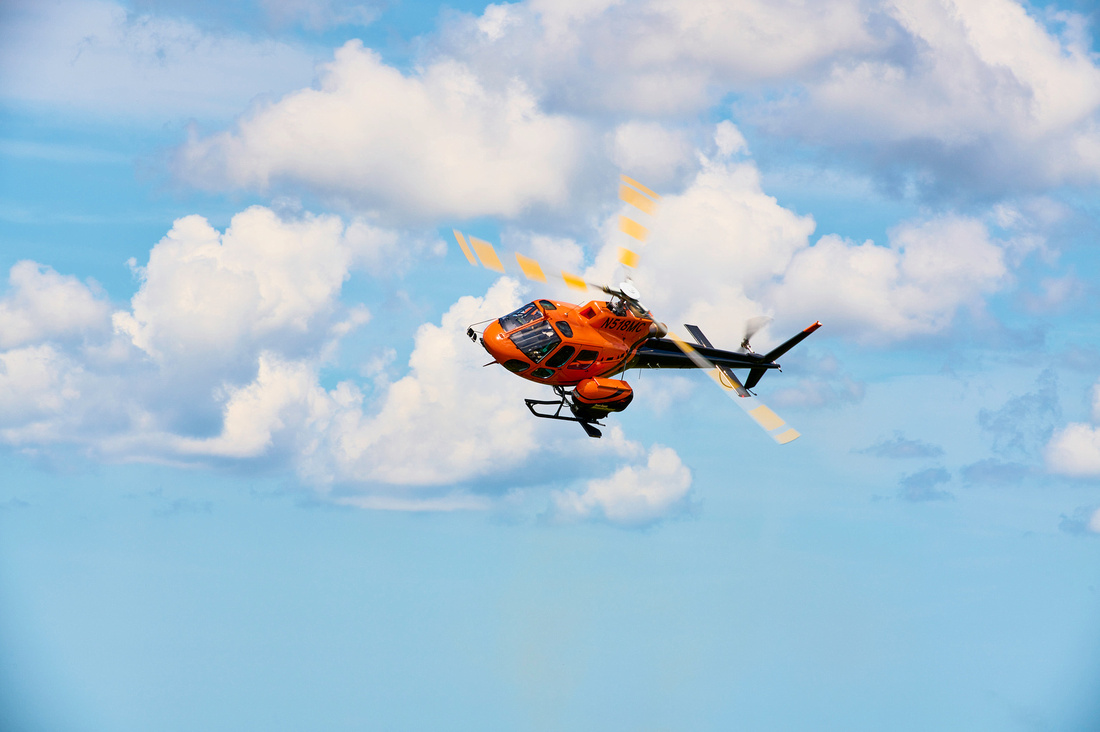 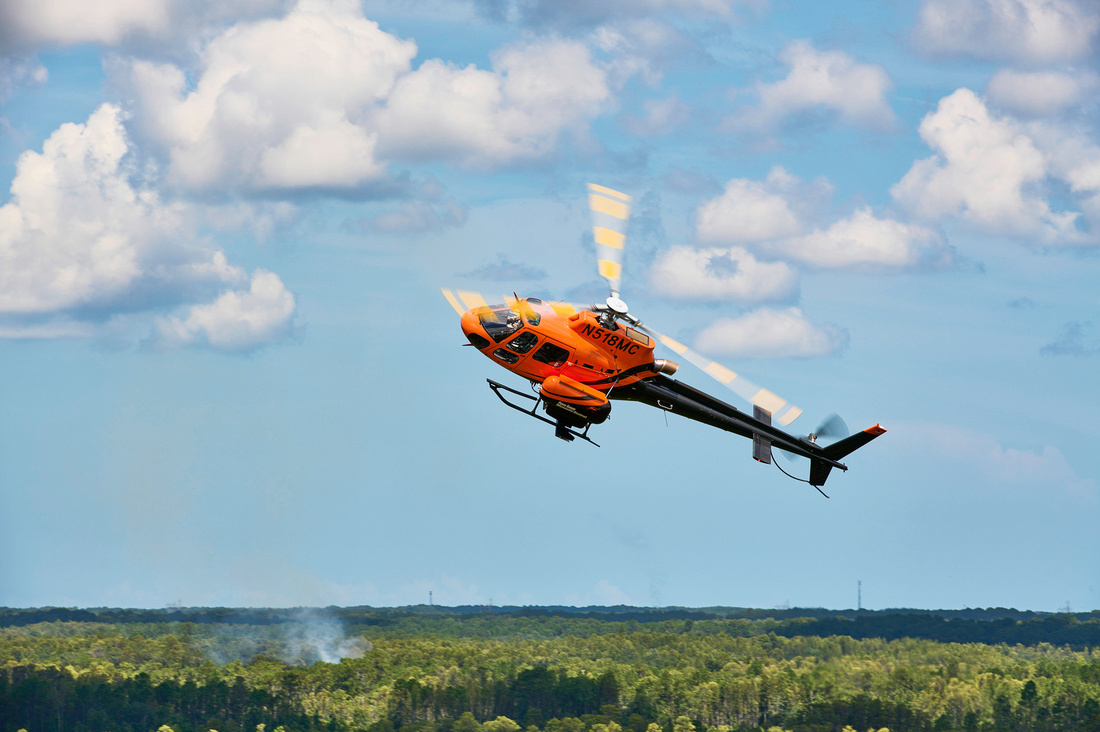 Ah! Here's more of the story.

Don't get me wrong — the first two photos are good, and can have their place depending on how they are used. But adhering to the adage of, "a picture is worth a thousand words," I could argue the first two won't measure up to that math. This third image, essentially, adds more words: "aircraft against sky, over woods and smoke and towers." 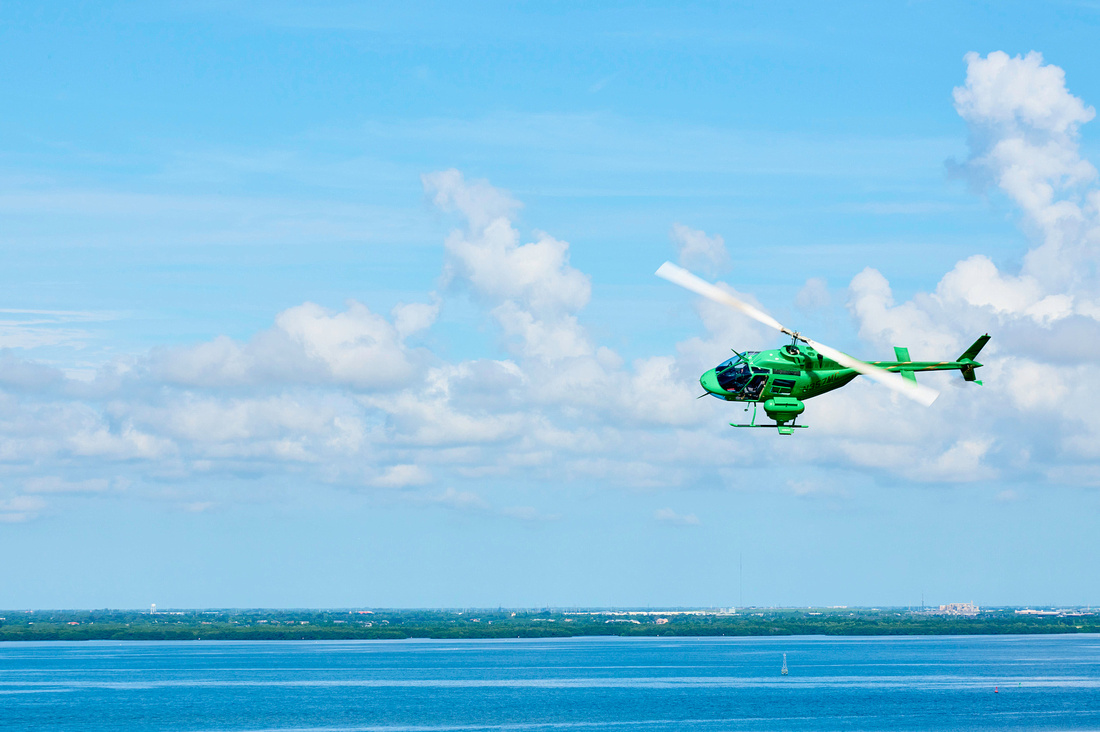 Here's a coincidentally convenient example of how showing the ground (or, in this case, the bay) provides useful context; I photographed the green Bell 206B barely an hour before photographing the orange-and-black AStar. The difference in context is provided by the ground/bay, with the Pasco County AStar flying over a wooded wilderness area 30 miles north of where the Hillsborough County Jet Ranger is banking over Tampa Bay before beginning its next run over MacDill AFB.

Much is similar between the two photos, but the differences are obvious and meaningful.

(A little behind-the-scenes credit where it is due: I was in the orange-and-black Pasco County helo when photographing the green Hillsborough County ship. The folks from these adjoining counties very kindly worked together so I could get these images.) 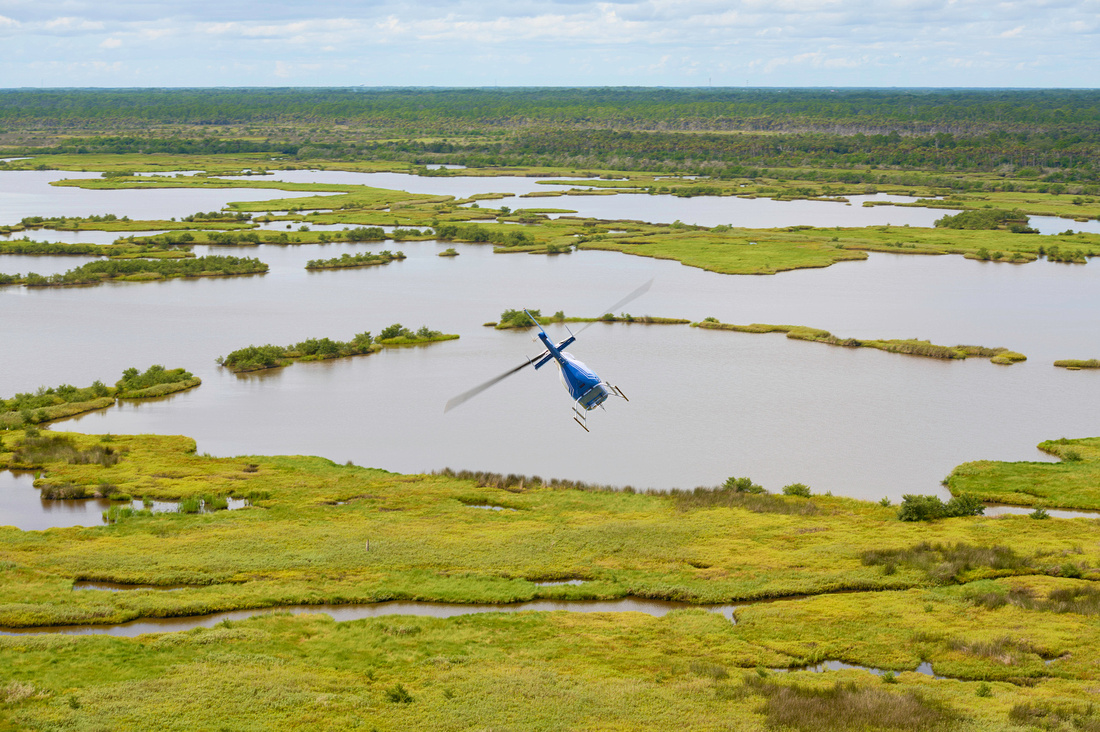 An example with ground and sky, but reversing their respective proportions compared to the previous examples. The aircraft, Volusia County's Bell 206L-4, is clearly delineated against the water; water that can be a breeding ground for mosquitoes, thus water the aircraft could be tasked to treat if an inspector, previously delivered by the aircraft, determines such a need. The scale of their responsibilities starts making sense when the aircraft is framed against the expanse of the territory. 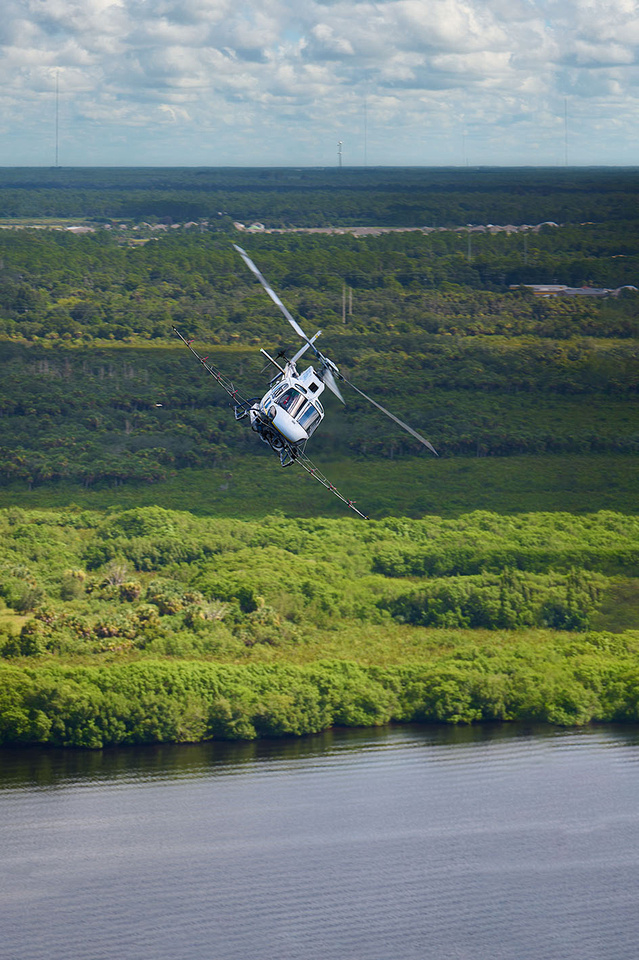 Another shot that's mostly ground, this time of a Lee County H125 coming around for another run at an island (out of frame). The white aircraft stands out well against the dark band of foliage, which is just one of several bands of color or brightness — sky, far horizon, mid-ground, bright foliage foreground, water foreground. So much going on; so much to look at. 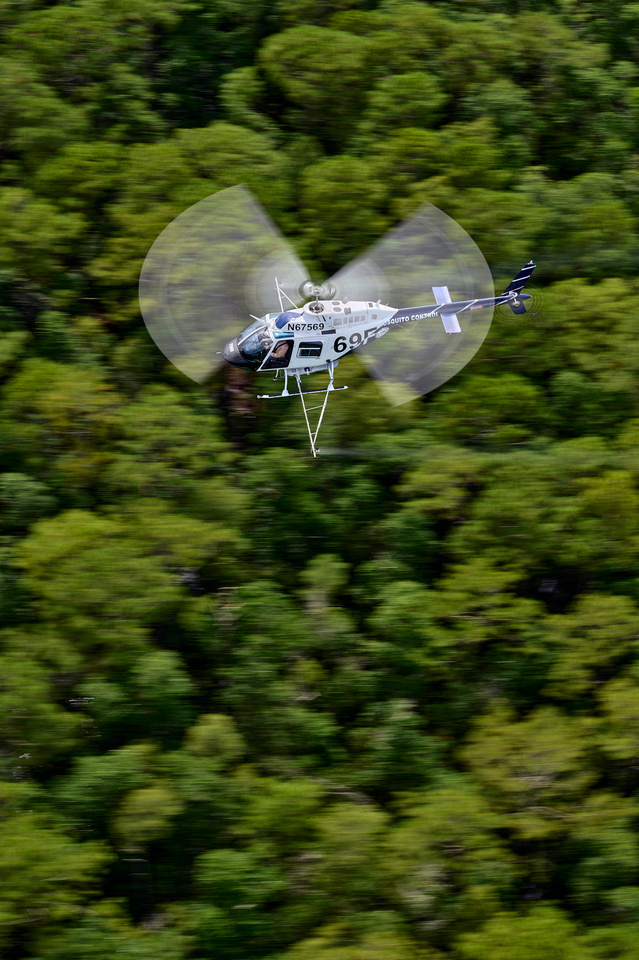 Showing just helicopter and sky, like the second photo way at the top, is a rather thin story, since there are clouds and sky everywhere in the world. But showing just helicopter and ground is not so thin; the viewer gets a sense of the environment. This Anastasia Mosquito Control Jet Ranger is calibrating its liquid spray system over a swampy woodland (using mineral oil rather than the pesticide they would use to actually fight mosquitoes). The slow shutter speed allows for a lot of rotor blur, and also blurs the passing trees, both blurrinesses bringing plenty of attention to the aircraft, despite it being relatively small in the frame. The blurry treetops can also better provide a background for text. 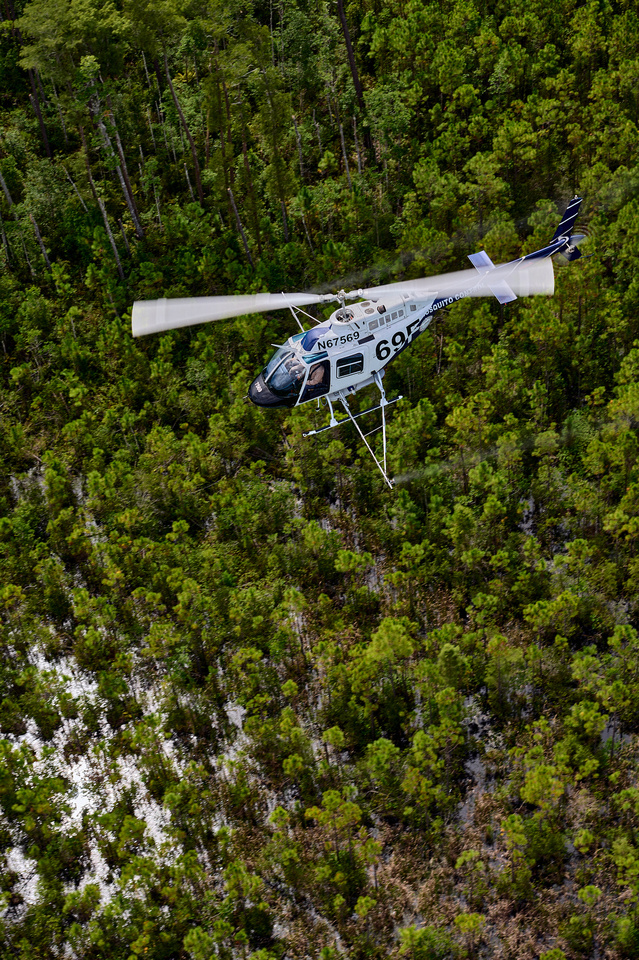 And since I made both types of images, here's what it looks like without all that buttery blurriness. It tells the same story, but tells it with a different character. 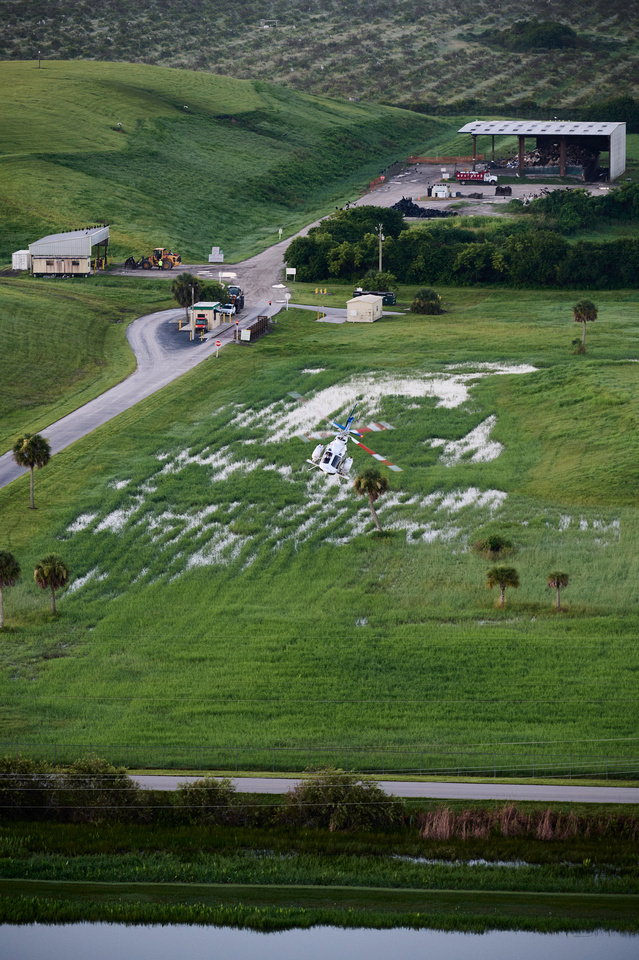 Still, you have to be careful with the background. See the aircraft in the above shot? Takes you a second or two to find it. There are too many details to grab your attention, and the mostly white Collier County Bell 407 is positioned against the nearly white standing water. In this instance, the environment overwhelmed the aircraft. 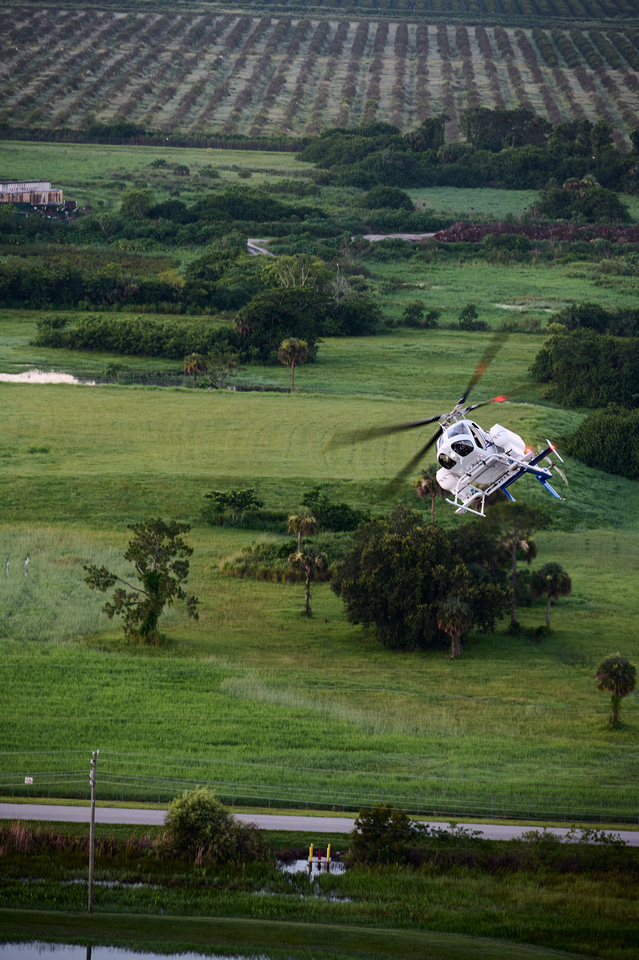 Much better! I'll admit — I mean, I just showed it to you — I'll admit that I made that first shot, even though I probably foresaw its uselessness as a photo. It works as an example for this article, so there's that, but I probably made that shot mostly for getting the composition going, the autofocus going, and tracking where the aircraft was going. 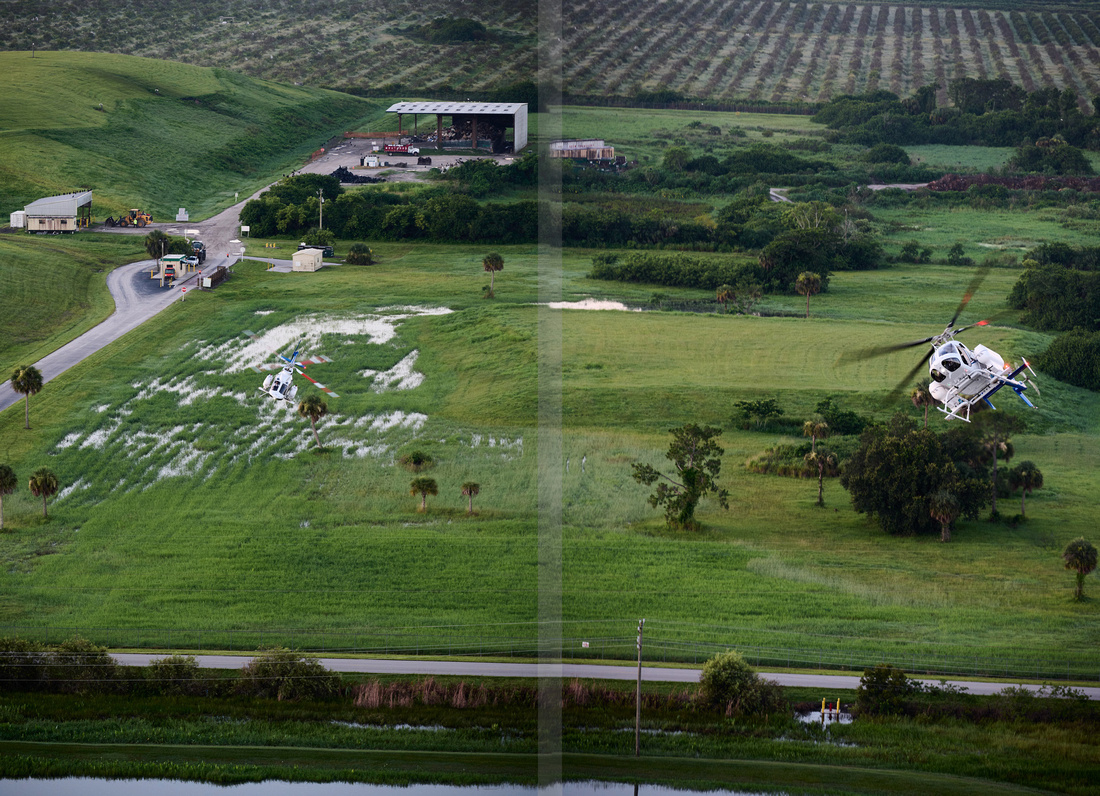 In reviewing those two photos, I noticed the first one seemed to be against a background that nearly, very nearly, abutted the background of the second one. Because I'm a curious guy, I opened them both in the computer and created this composite shot, with the grayish band between them showing a made-up swath to span the slight gap between the actual shots. The two frames were shot 6 seconds apart and, in that time, the aircraft's path described a lazy S nearer the ground before pulling up. Perhaps it's an overstatement, but I'll go ahead and quote Spock: "Fascinating." 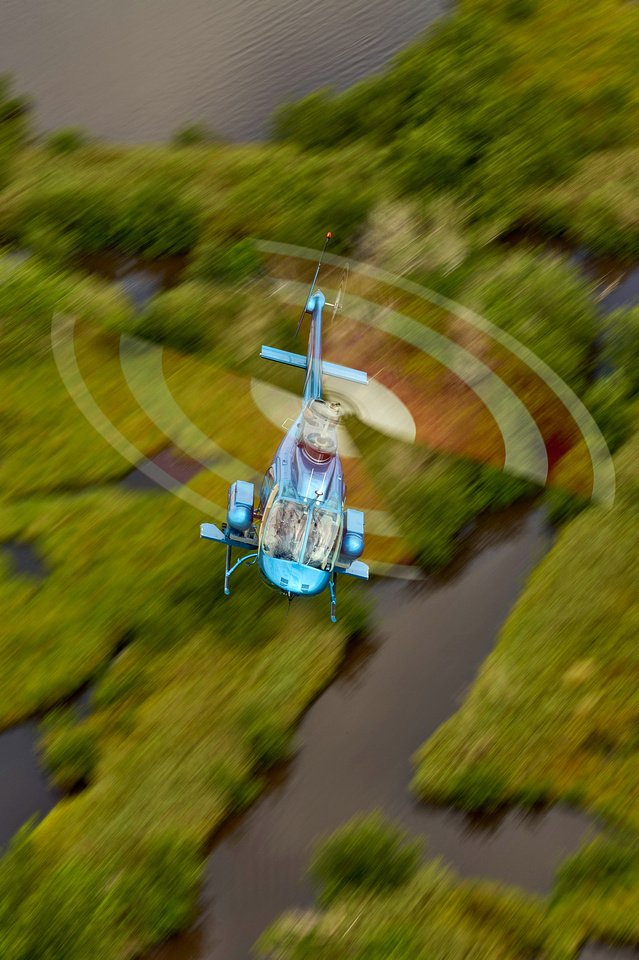 Like most of Florida, Flagler County is a mix of water, wetlands, and (if you ask me) always-moist ground. The East Flagler Bell 206B-3 shows off well in blue metallic against the yellows, greens, and browns of water and wetlands common in the eastern part of the county, near the Atlantic Ocean. It is a beautiful aircraft, and I photographed it to put that beauty in its milieu. 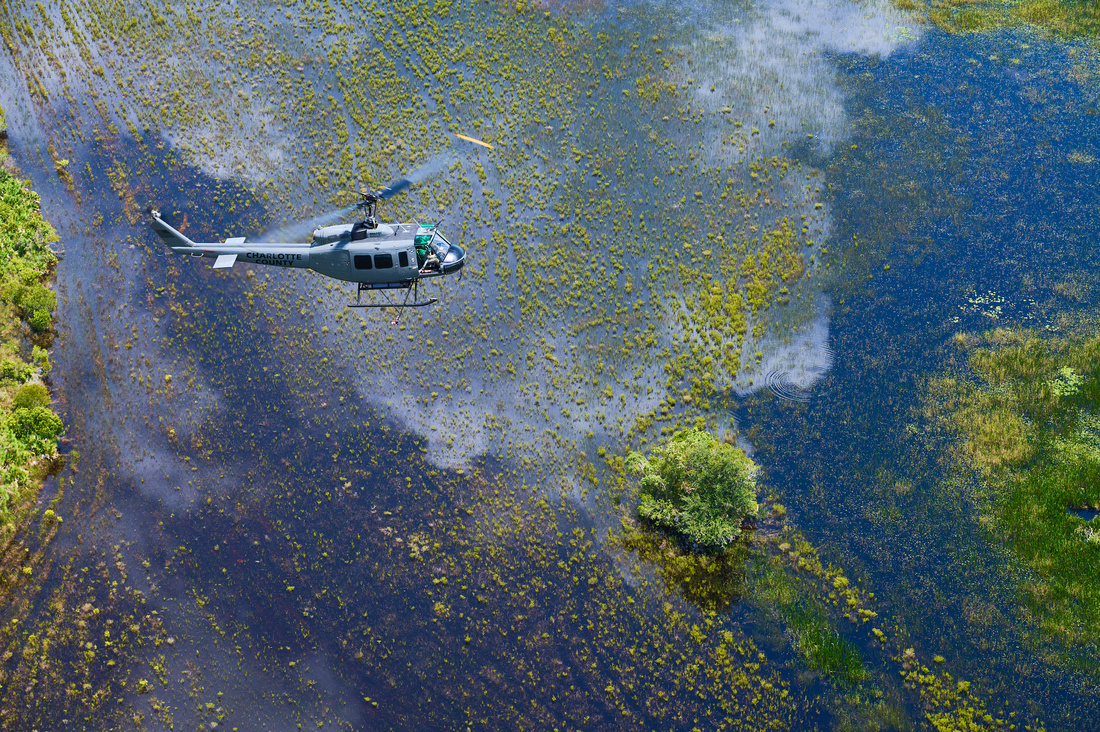 More water, but I took advantage of our flying directly over it to make use of its reflective qualities. We're looking down at the Charlotte County mosquito control Huey and the terrain, but thanks to the potentially mosquito-infested standing water, we're also seeing the clouds in the sky. Nice! (Plus, something just splashed or dunked or plopped, as evidenced by the rings in the water just to the right of center. I, myself, was looking for a 'gator…) 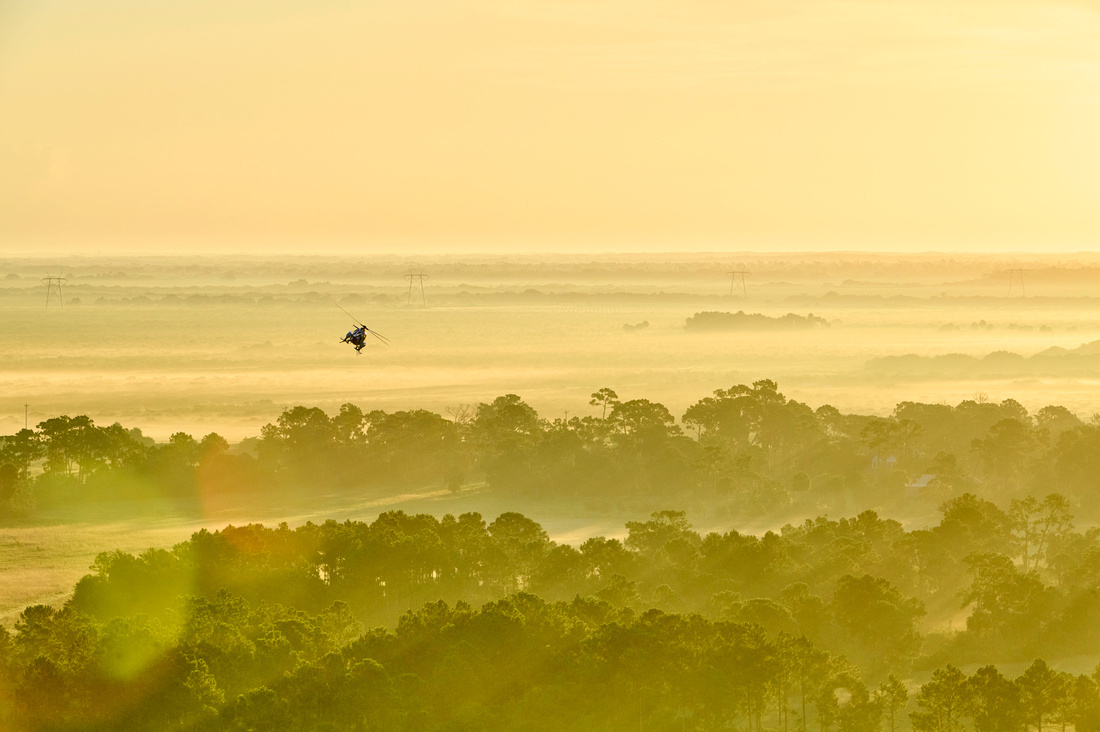 Finally, a truly gorgeous (if I do say so) scene, captured mere minutes after sunrise: mists clinging among the lowlands and trees, broad swaths of pastels filling the frame. Yet our eyes are drawn to the helicopter. Its colors are bluer, its details are crisper, its contrast is greater. It is tiny in the composition but big in our minds. We scan the mist, we peer through the trees, we gaze at the far horizon, but we keep coming back to that aircraft.

And by looking wide and then focusing small, back and forth, we see the bigger picture.

But for people who are making buying decisions, beauty is in the eye of the beholder, and the true beauty of an aircraft or its accessories is in seeing them in the world, doing the thing they do. It is natural to want to pack the aircraft tightly into the composition, but take care when making the photos, or instructing the photographer, to also make the aircraft small. It's a big world out there.