Blurring One for the Team

I was looking at an earlier posting, which featured examples of busy backgrounds and not-from-the-front lighting, both of which are usually considered bad practice, photographically. The example images were exceptions to such "rules."

Today I look at another "rule" — this one against blurry photos.

Photos of objects are usually created to clearly represent the object (or person or setting or whatever). That's the basis for the "don't shoot in front of a busy background" and "the light should come from over the photographer's shoulder" advice. That would be the basis for "the object has to be tack sharp" (or, as we say in the aviation photography trade, rivet sharp) rule too.

Okay. Fair enough, if the goal is, or includes, clarity of details. But sometimes you've gotta shake things up. A common condition has the object (person, setting, etc.) static. Just sitting there or, in the case of the first photo below, hanging there. 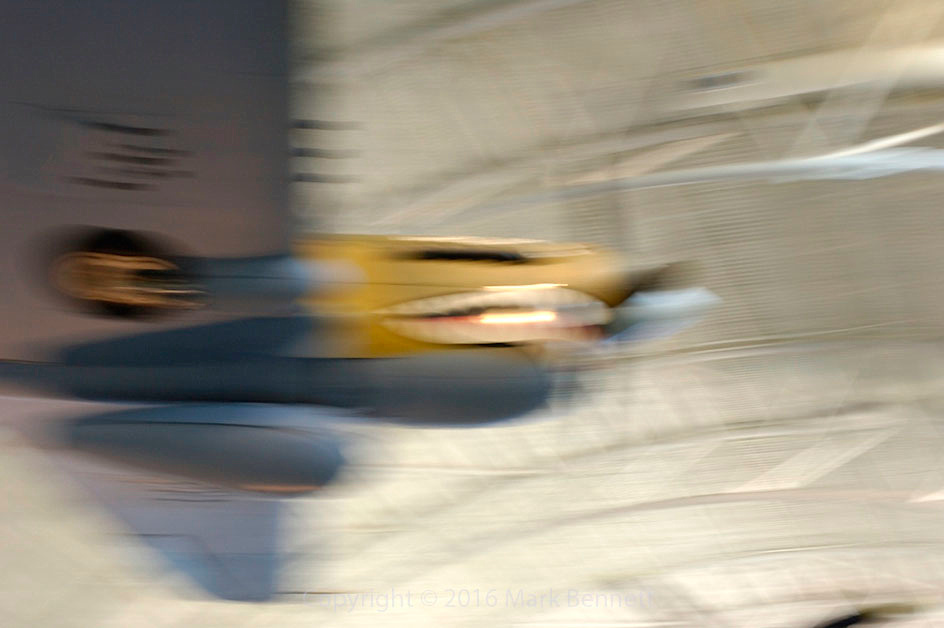 Many of you will have identified this as a P-40, specifically the P-40E Kittyhawk "Lope's Hope" hanging in the Steven F. Udvar-Hazy Center, at Washington Dulles International Airport. Beyond the top-level identity of the aircraft, the other details are quite possibly not identifiable in the image. But they don't have to be. I recognized that a clear image would necessarily be dull — the airplane is static, the background is busy with criss-crossing structure and texture and, depending on the composition, the cables by which it is suspended visible.

What to do? What I did was sweep the camera from right to left during the half-second for which the shutter was open. The result, to my eye, is a big boost in interest and utility for the image. The blur gives a sense of motion and also nearly obliterates the details in the background which would have added no value. So we have an airplane in motion and a background that is not just not distracting, but could be used for typography or other graphics.

The second image is of the compressor section of a General Electric T700 engine undergoing repairs at the Corpus Christi Army Depot. The compressor is, perhaps obviously, perhaps not, resting in its cradle. I could have clearly described it in a photograph, but you can again appreciate both the static, i.e. non-energetic, nature of the resulting image and what would be a distracting, hard-to-ignore, hard-to-use background. In this case, during the one-eighth-second exposure I rolled the camera in my hands as though it were a steering wheel, keeping the lens pointed at the center of the foremost compressor blisk, and added a flash to give back some clarity to the details. 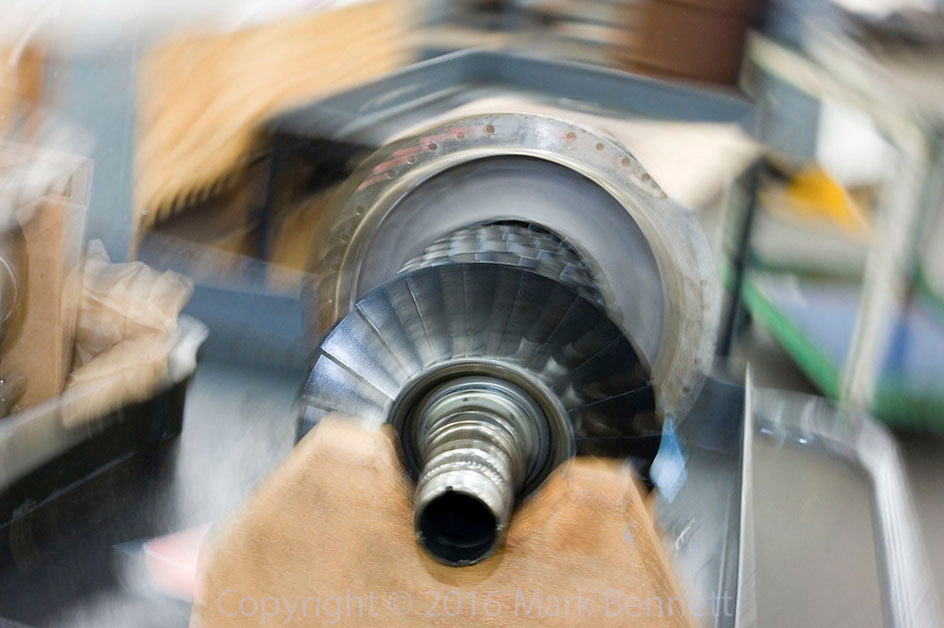 Energy, a clear focus (even if blurred), and a background that lost its distractive quality. All with the twist of the wrist.

The image that heralded this blog post is of an F/A-18 during a Red Flag exercise at Nellis AFB. In that instance, I let the subject do the blurring for me — using a slower shutter speed and letting the Hornet blur across the background enough to give it speed without losing its identity.

So, keep your eyes open and your thoughts beyond the object before you, to how the image might be more effective with a swoop or a twist. It is important to maintain the appropriate level of detail in commercial photography, and sometimes that level is approximately nil.