Skew Not The Scenery

Among the several challenges you face when photographing the interior of an aircraft is the small space. Not much room for photographer and lights, so you often mount the lighting equipment outside the aircraft, sending the illumination in through the windows.

That means you're working on the ground. On the ramp or in a hangar. And what you see through those windows is, thus, not the scenery that would be passing by in flight.

Not a problem — shoot the aircraft on the ground then digitally insert an exterior scene as though seen through the windows of the aircraft.

However, an error I've seen repeatedly in images of aircraft cabins is distortion of that exterior scene, as though it is a poster taped to the window outside the aircraft. You've bound to have seen this yourself, in ads or marketing materials, even if you didn't understand why it looked wrong.

Typically, it looks wrong because the image of the world that is visible through the windows, as seen by the camera, should be the same as if you saw the world from that same location, floating in the air, with no aircraft present. But some presumption of what the occupants would be seeing (even if no occupants are present) apparently leads some photographers or production artists to skew things up.

Here are an aerial scenic and an interior of an aircraft. The scenery is what is known as the East Valley, in the Phoenix, Arizona, area. The aircraft is an MD Explorer. (I'd not realized until after I put together this article that, coincidentally, the MD Explorer is made in Phoenix's East Valley — nice!)

To properly combine the two images, drop the aircraft onto the scenery and cut out the windows. That's about it, and here's what it looks like when done properly. 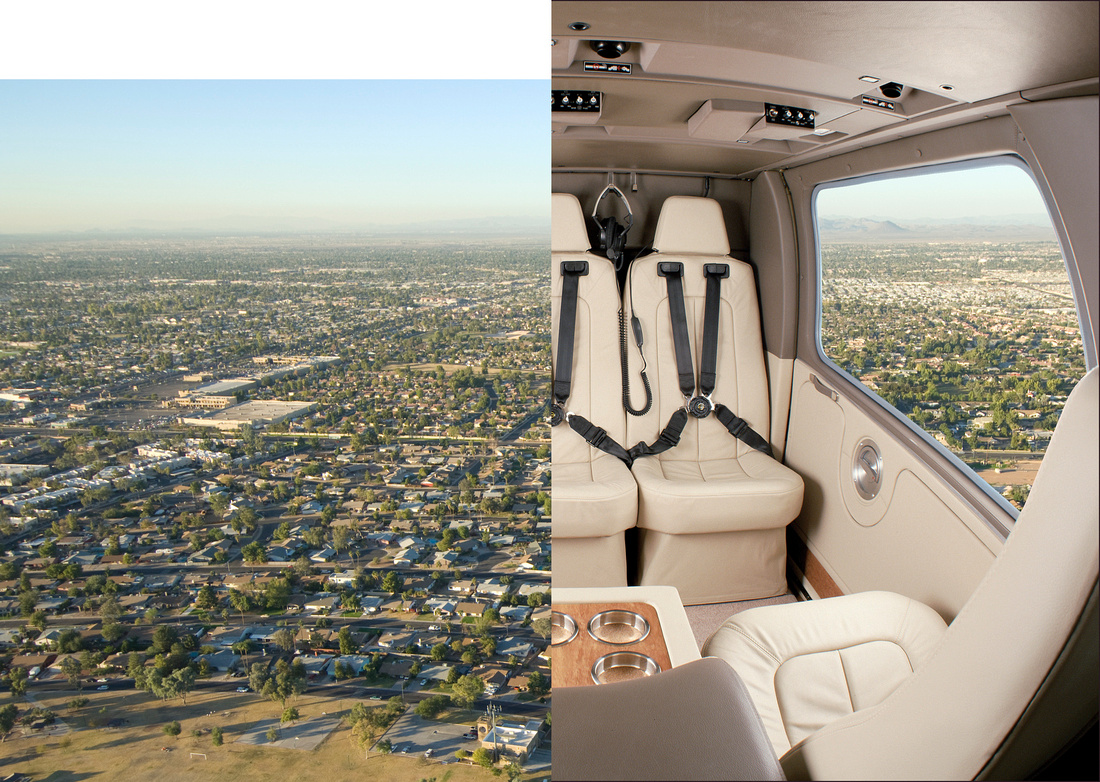 But if the background is skewed like a poster taped to the glass, this is the result. I had to duplicate and flop the background image because the skewing caused it to contract, using up nearly the entire width of the background image to fit into the window as I've seen it done. I could have worked harder to avoid or hide that dupe/flop, but showing it this way helps you compare the scenery on both sides of the following cutaway. 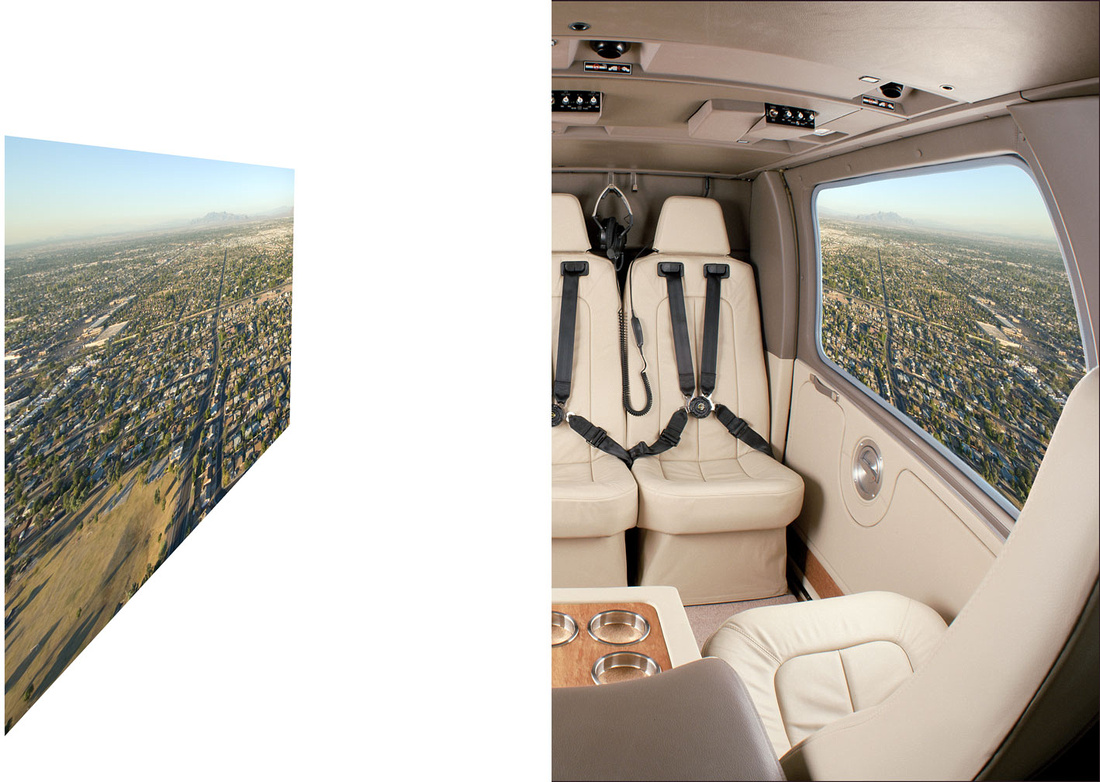 The proper technique is simple enough, right? Whatever your background image, if it is suitable to be seen through the windows of an aircraft, leave the background alone and merely place the aircraft over it with the horizon running through the image as appropriate to the aircraft and the setting.

To really drive the lesson home, let me tee up and hack this Mulligan into the rough for your slow-clapping pleasure. (I don't know golf, obviously.) What I mean is, here is a direct comparison of the wrong (left) and the right (right) scenic treatments. 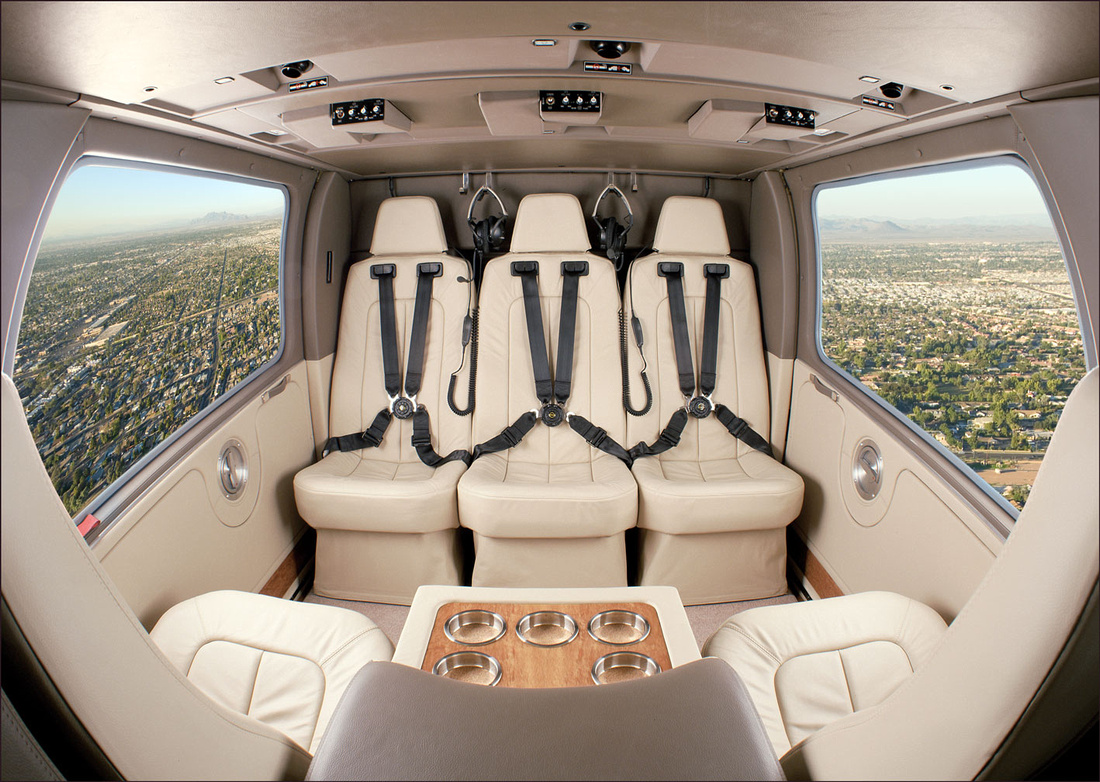 On the topic of background appropriateness, don't let the beauty of the background overshadow the subject of the photo — the aircraft. Also, choose a background that has lighting which reasonably matches the lighting inside the aircraft. You can get away with some imperfection, but if the two are way out of whack, people's attention is disturbed by the mismatch. Here's an example of a bold background that demands its own attention, with lighting on the outside that is unrelated to the lighting on the inside. Doesn't your attention keep wandering to the scenery? Mine does. That's not what you're selling, so don't let it be what your viewer is looking at. I'll conclude by observing that these types of digital constructions are prone to being both overthought (skewed scenery) and under-evaluated (lighting). My advice is: think carefully but not too much.

John Sepp(non-registered)
Great article on a technique most will pass over too quickly - What really looks natural out of the window of an airplane.
there are details in here on photographing an aircraft interior (lighting from the outside in) and then how to balance the exterior view with the interior lighting.
What would be fun is also take the photo with models in the interior - as it would be used. Gets a but more on cutting out the windows but would be interesting.
Bottom line is what the customer wants and delivering a quality product.
Thank you Mark for another great insight into aircraft photography.
No comments posted.
Loading...
Subscribe
RSS
Recent Posts
The Frog in Your Hand From One, Many Too Many and Not Enough Background Players Opening Wide Up up up Not So Show-y Shooting the Hero The Long and Short of It Move Close and Say Aaah
Keywords
photography aviation technique composition helicopter airplane aerospace background focus Arizona
Archive
January February March April May June July August September October November December
Unless marked otherwise, all images are copyright © by Mark Bennett, all rights reserved.
User Agreement
Cancel
Continue