Over my years of aerospace photography I've noticed that my eye, and camera, often turns to engines. I wonder why that is? And even if I had a succinct answer to that question, why would you care?

The "why" of my photography is answered by my appreciation for the graphic opportunities offered by the machinery, tied to my understanding, as limited as it might be, of the wonders contained within and the wonders made possible without. Not succinct enough? Okay, the short version of the answer is: they look cool and do neat stuff. 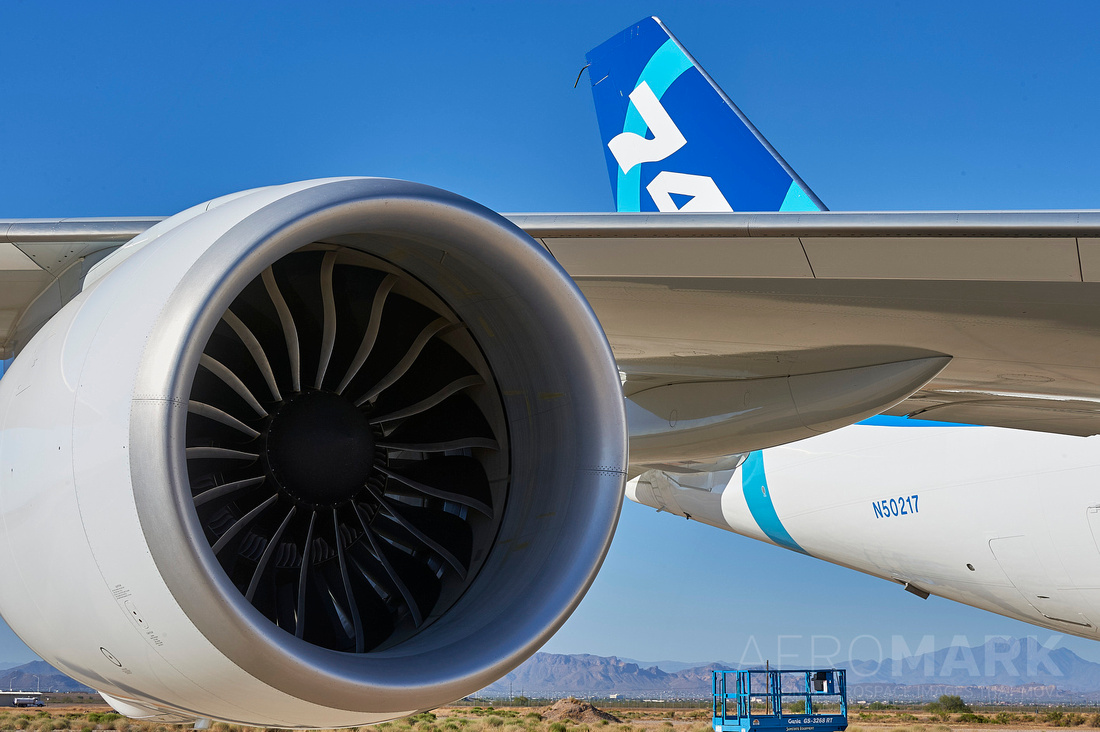 As for why you would care, I suggest that seeing some examples of my infatuation might spur your own photographic exploration in search of interesting and useful imagery, or lead you to expect more from a photographer you engage to those same ends.

Above is exhibit A, a General Electric GEnx engine hanging on the wing of a Boeing 747-8F. Boeing had the aircraft in Arizona for hot weather testing and, among the many images from a couple days of shooting, I brought back many featuring the engines. This shot is straightforward and includes enough of the aircraft to identify it without requiring a fuller portrait. 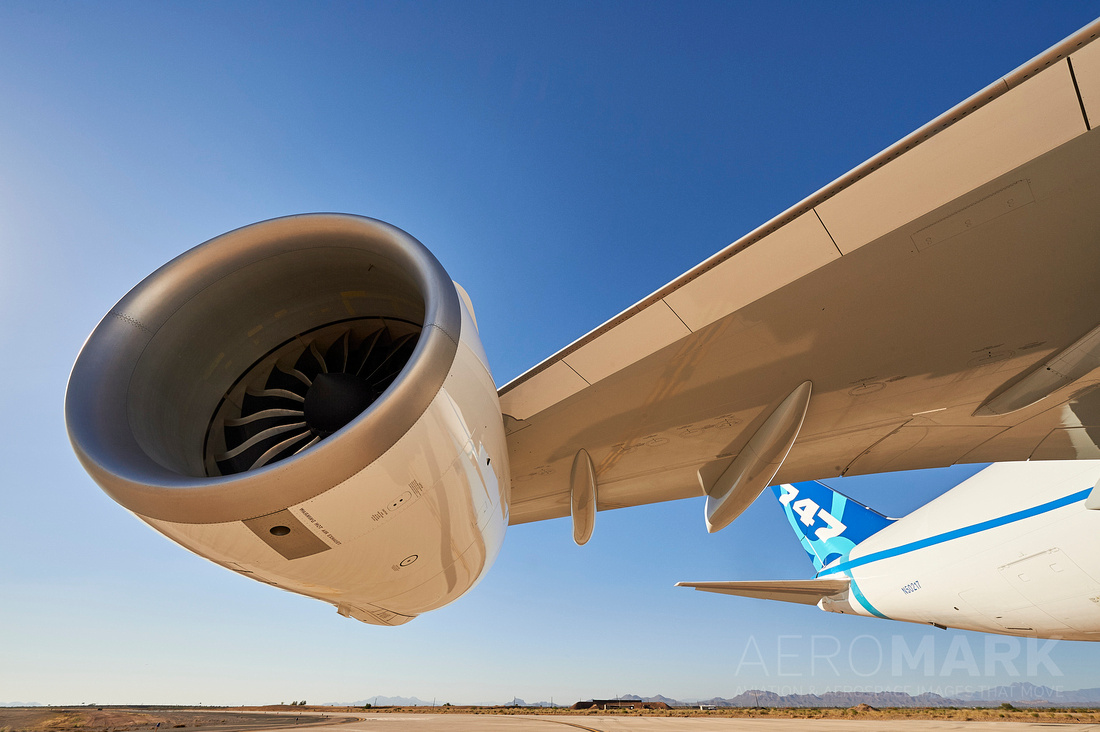 Here is the same engine, seen from a location not far from the previous one. Now a bit inboard, this was shot with a wide angle lens which, admittedly, optically distorts objects towards the edges of the frame. Intake stretched out and misshapen? Done! Then again, the engine is now ready to suck in the unobstructed sky, while we've retained a view of the markings on the vertical stabilizer. This is a more eye-catching rendition because of the distortion, and catching eyes is job one for advertising/marketing photography. 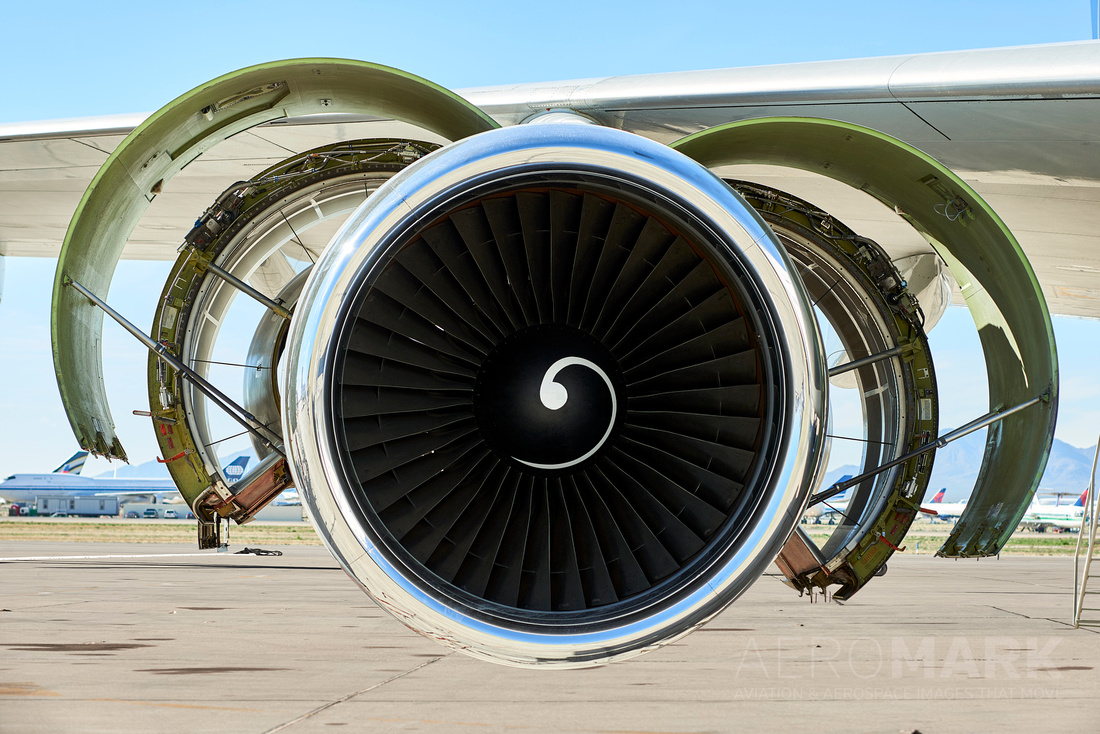 A different 747, with a different engine, undergoing maintenance. A very graphic representation of the complexity of the nacelle panels without cluttering the composition with the myriad details that would have appeared if shot from an oblique angle. I can just imagine the headline or caption, something like "open for business" or "see what's inside" or "we give you wings!" (Maybe that last one's taken?) 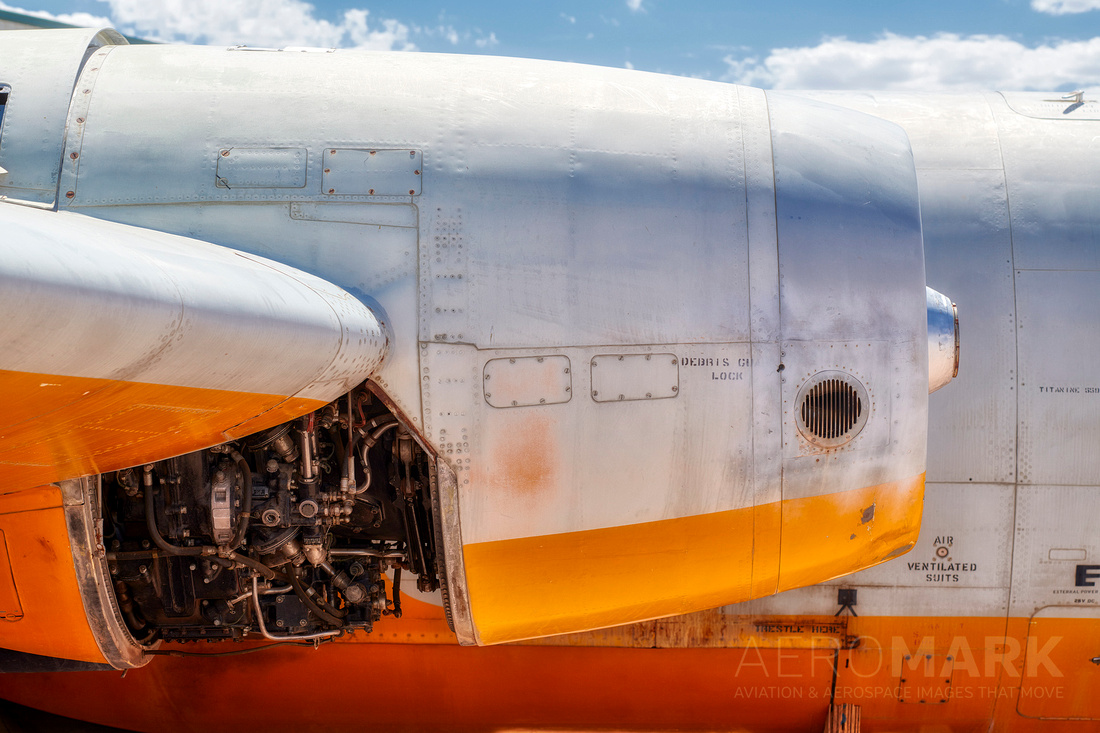 This engine mounted mid-wing on a B.2 Canberra is in need of some maintenance, sure, but made for an interesting still life — faded paint, complex mechanicals, and sky. And notice how the wing, and the engine, and the fuselage are related in shape, shifting from narrowing with rounded leading edge, to narrowing with blunt intake, to barely narrowing fuselage, each with an orange underside. A respectful rendition of an aged machine that invites the viewer to spend some time wandering around the textures and details. 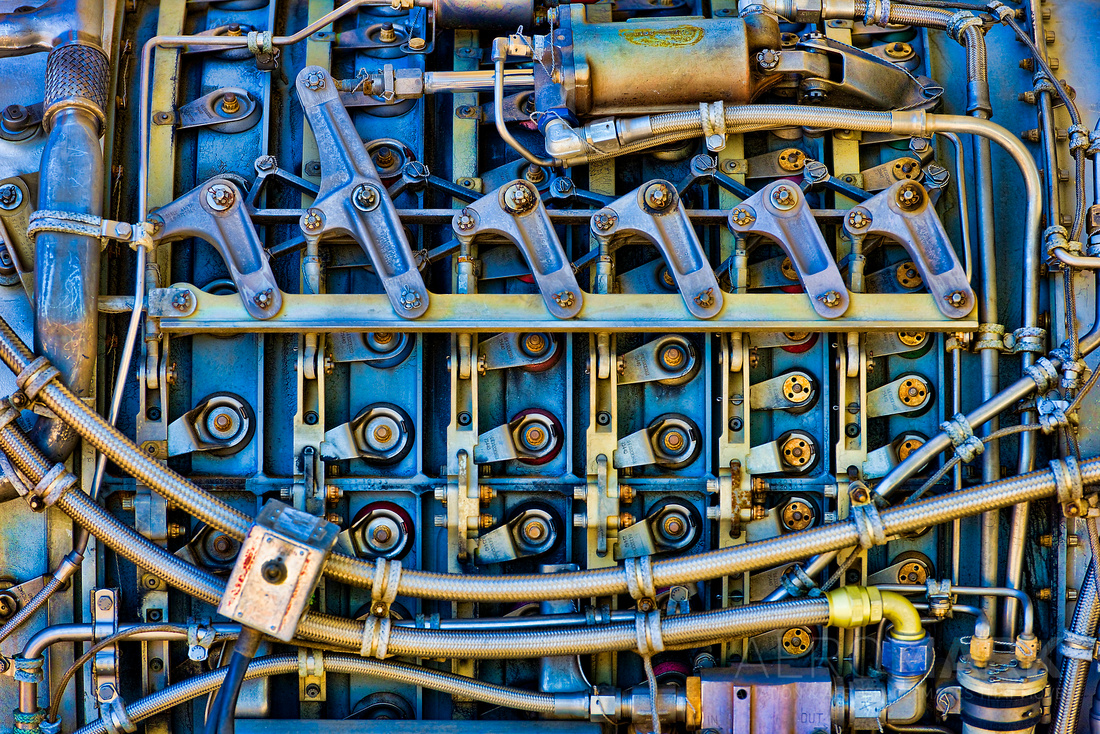 If I'm talking "mechanicals," I'd disappoint myself if I didn't include this detail of a breakthrough engine from the 1950s — the J79 that powered the F-4 Phantom II and B-58 Hustler, among others. The breakthrough was variable stators actuated by those dog-leg arms. It was a great engine that, with tweaks, continues to serve with foreign militaries' F-4 Phantoms. Not bad for a sixty-year-old design. There's a lot going on in this image, so I've composed the shot to clearly show the arrangement of parts and plumbing. If you are communicating an important feature of your product, a bold, smart approach can bring visual interest and clarity to back up your story. 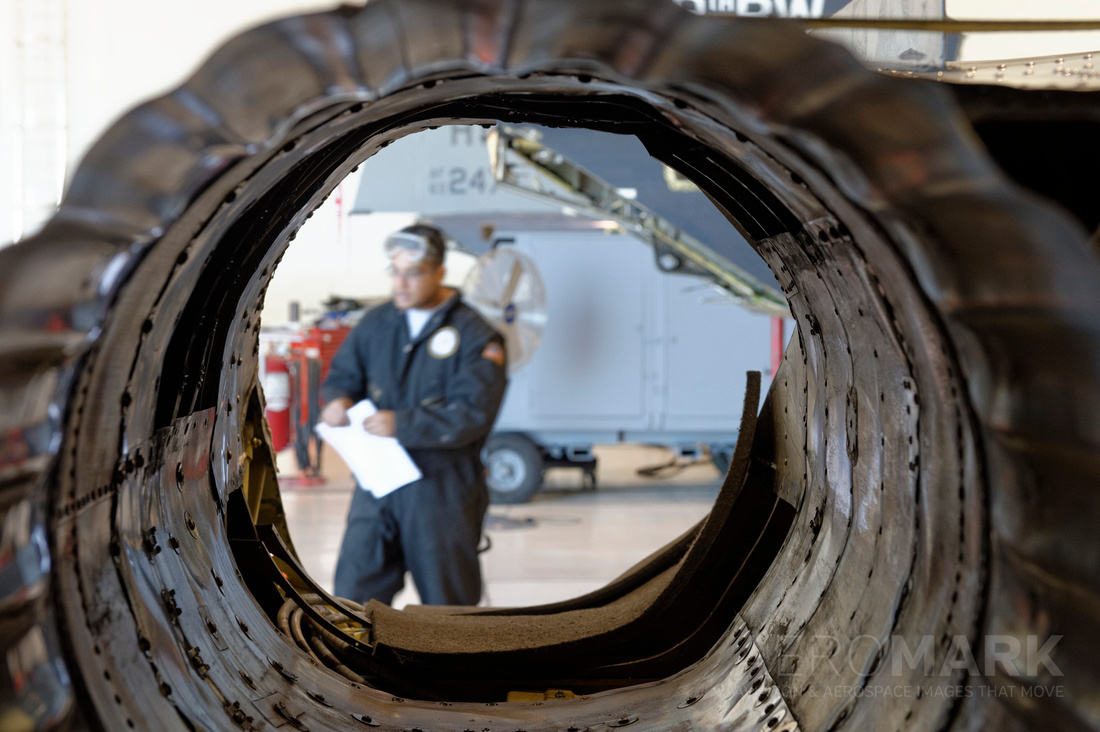 Even with no engine in the engine, there are ways to incorporate them. This maintainer is shown through just a smidgen of a T-38 Talon trainer fuselage, where the engine should be. Here I've brought people into the mix without focusing (no pun intended) on the person. 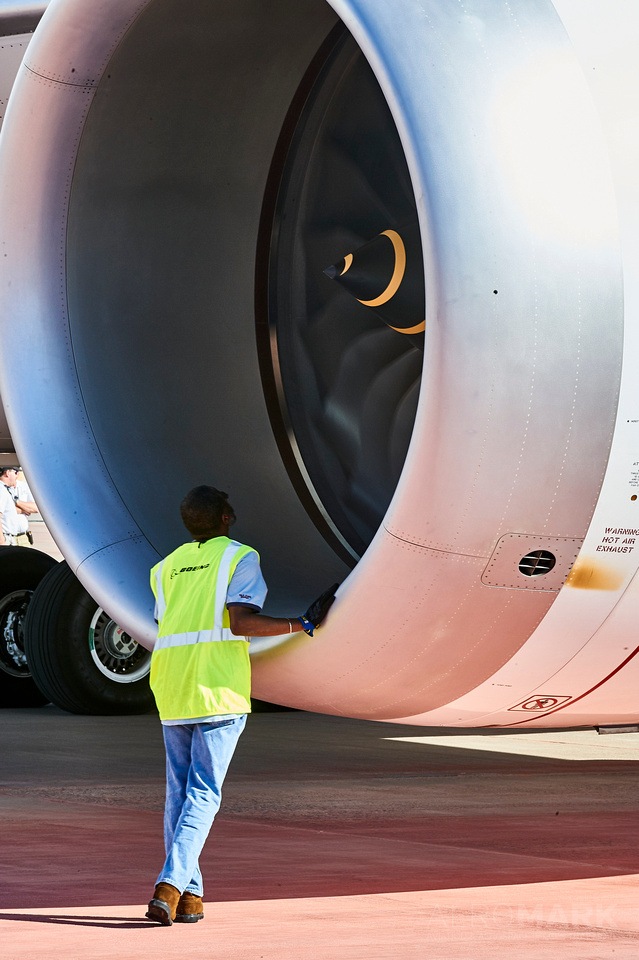 Speaking of putting people in the shot, this Boeing technician is inspecting the Rolls-Royce engine on a Boeing 787. Including a person gives the image scale, revealing how large these engines are without resorting to a "stand here, in front of this engine, and look at the camera" or "stand here and pretend to be looking at something" approach. (BTW, the engine is not running — the fan blades are being driven by wind blowing across the ramp.) 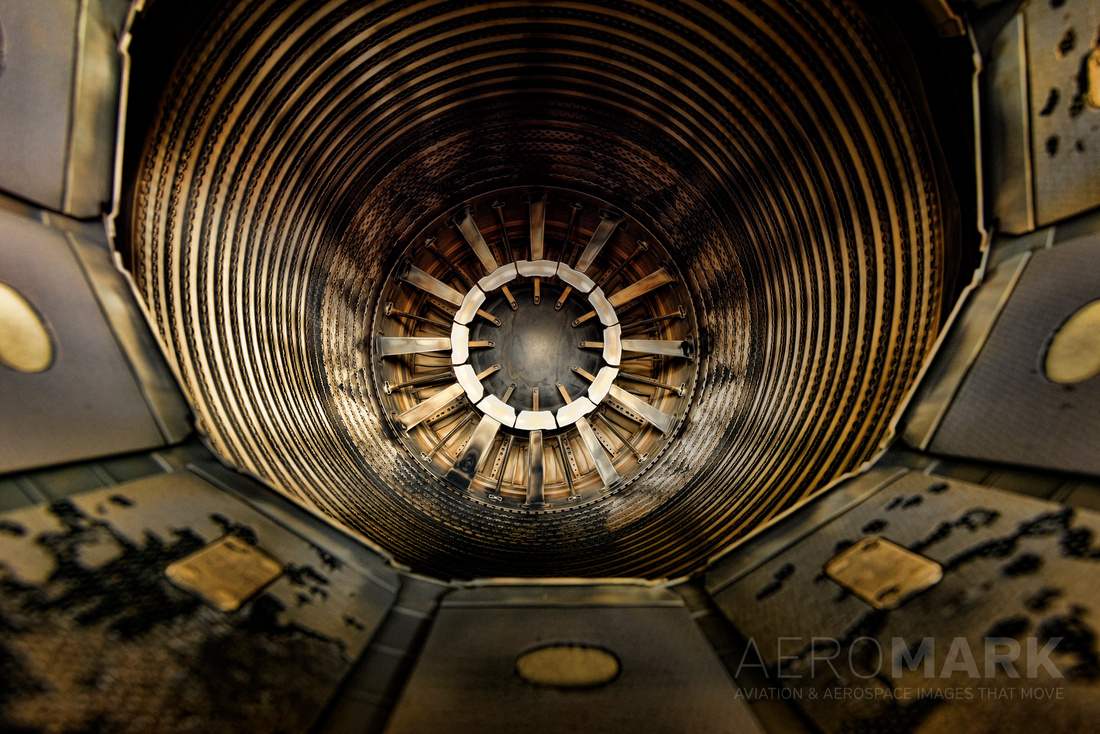 Those familiar with my work will not be surprised to see an image like this. An E/A-18G Growler was just sitting there in a hangar on Whidbey Island, Washington, minding its own business, when I walked up and brazenly poked my camera into its tail feathers. (Tail feathers is slang for these panels nearest the camera that contract and expand to adjust the dimensions of the conical exhaust nozzle.) What we see is the rear of the engine and the afterburner section in all their gritty glory. Often I strongly emphasize the latent colors, but not here — it's naturally dim in there so I upped the contrast, but that's about it. Boom! Attention grabbed. 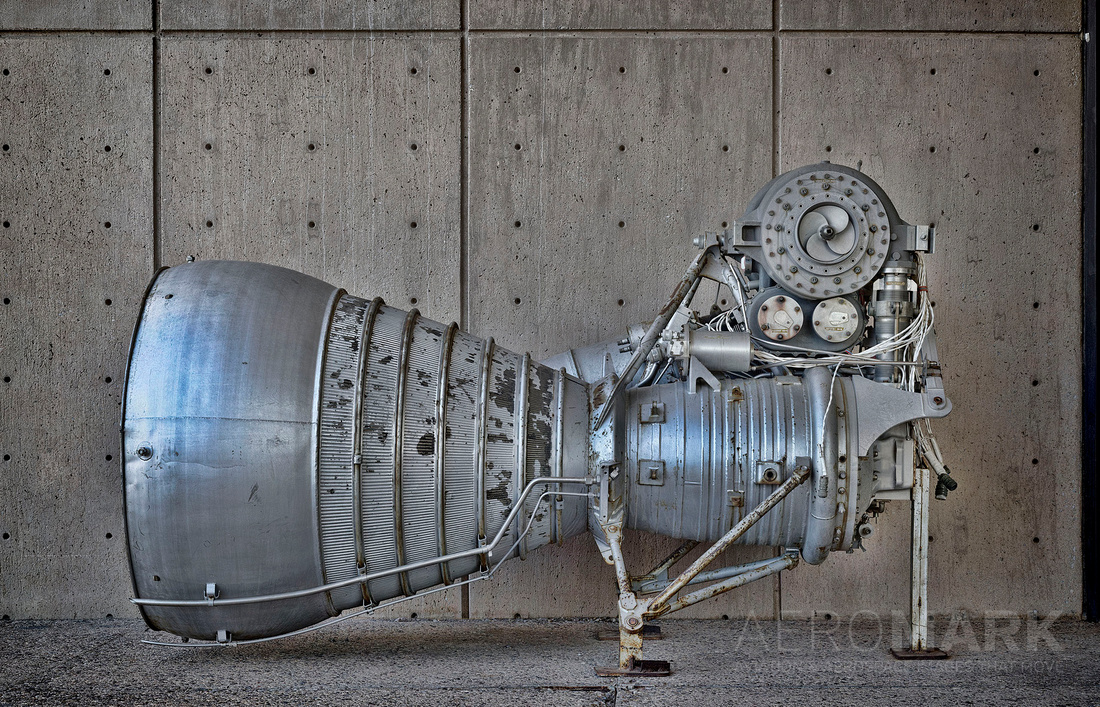 I'll wrap up with a panoramic assemblage. This is an H-1 rocket engine on display at the New Mexico Museum of Space History. I was attracted to the textures and details of the engine contrasted to those of the concrete ground and wall. So, 26 frames later I had the beginnings of a formal portrait that could be easily printed 14 feet wide for an exhibit, which would make this larger than life size.

It doesn't have to be engines

The point of all this has been to, perhaps, expand your thinking about ways to look at propulsion units, or whatever products or processes are your business. Keep in mind what you are trying to accomplish and how the images will be employed, but also be aware of the opportunities afforded by the particulars of your subject and its environment.