There's a category of helicopter operations called human external cargo in which a human, or humans, are carried in a somewhat unrestrained manner. They aren't just hanging onto a flying helicopter sipping a drink with an umbrella stuck in it, but aren't belted into a seat, either. They have a job to do that requires some freedom of movement outside the aircraft.

And sometimes "outside" means "suspended on a rope 100 feet below." Cool! One such job is attaching those large spheres to power lines that alert passing aircraft to the presence of the line. The spheres are known as aerial marker balls and, well, somebody's gotta get 'em up there, so call in a helo and a couple of people with balls. In this case, the electric utility called in Wilson Construction of Aurora, Oregon.*

I was working on a story about human external cargo, so my job was to capture these guys doing theirs.

Thus, at 4 a.m., when the alarm went off, my assistant and I sprang out of bed (if by "sprang" I mean "dragged ourselves"), freshened up, gathered our gear and headed to the first site of the day. We arrived at the appointed time, pulling into the dirt lot along with the linemen and various support personnel in their small fleet of trucks. The sun was still an hour below the horizon, and the helicopter wasn't due until daylight, but already they were laying out their gear. 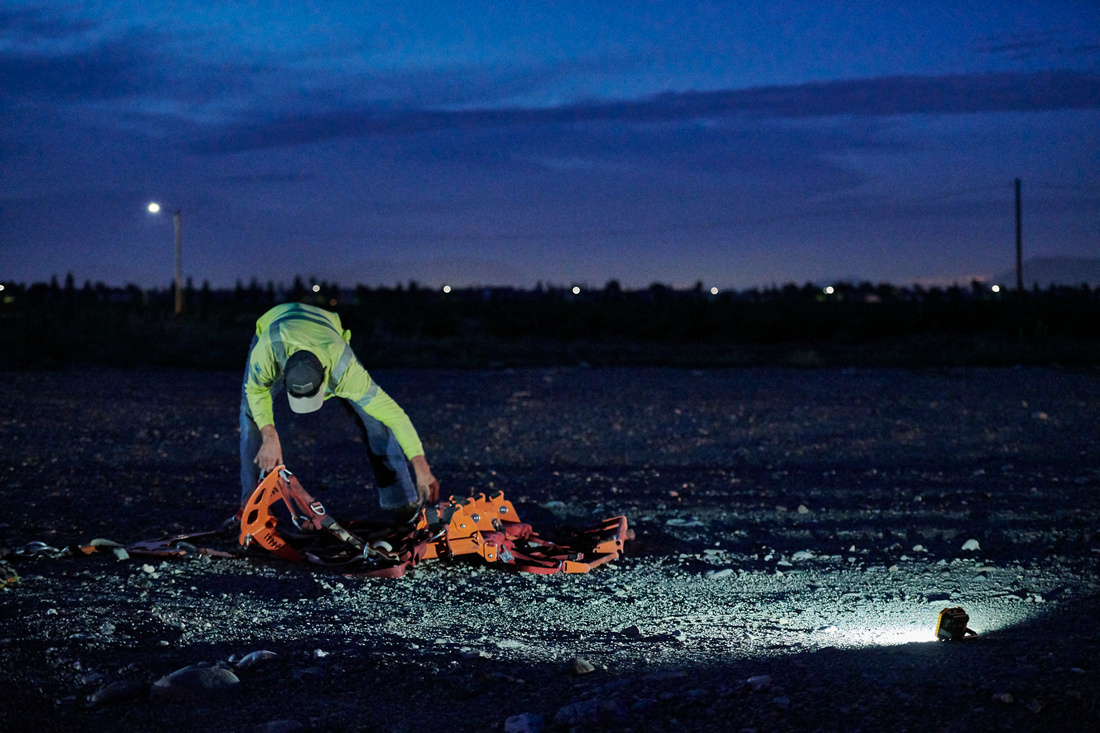 My story was focusing more on the human elements of human external cargo, HEC as it is initialized, rather than, say, the aircraft. Which is why we were there in the chilly pre-dawn dark, photographing the men going about their business. The orange metal seats were laid out, strung from a series of spreader bars, straps and carabiners sprouting everywhere. The helicopter arrived, the human-rated line was laid out and attached to the belly hook, the tailboard briefing was held, documents signed, and all was made ready to fly. But they didn't fly right away. These marker balls were to be hung above a freeway, so the linemen laid back in their rigging, cradling a ball, the helicopter sat spinning, and everyone waited. And waited. And waited for the highway patrol to close and clear a section of freeway over which two balls were to be installed.

Then, boom! The freeway was clear and off they went! 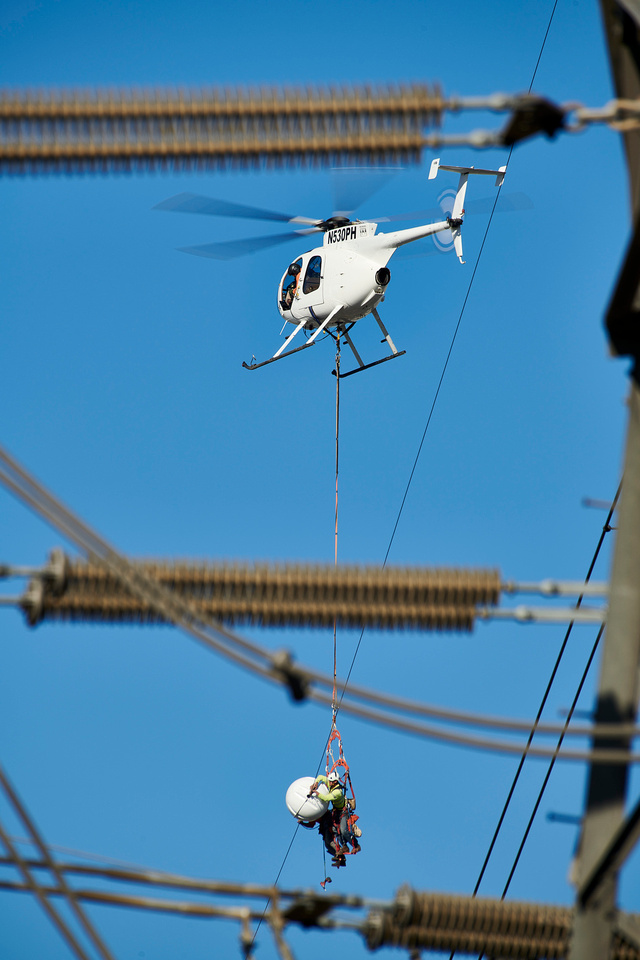 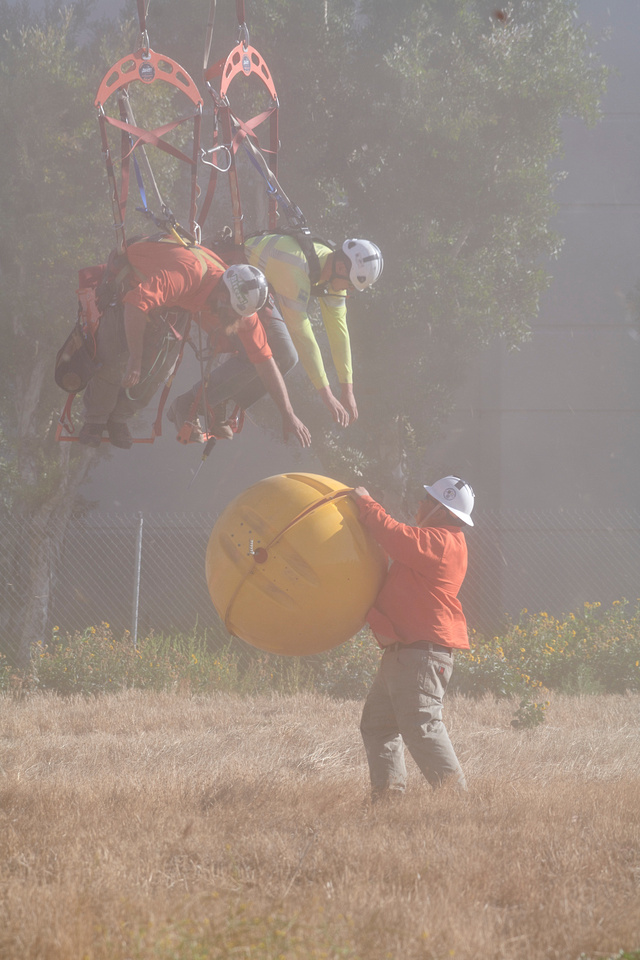 That sequence repeated three times, twice in dusty fields, once in a gravel quarry. Set up…wait…wait…wait…go! 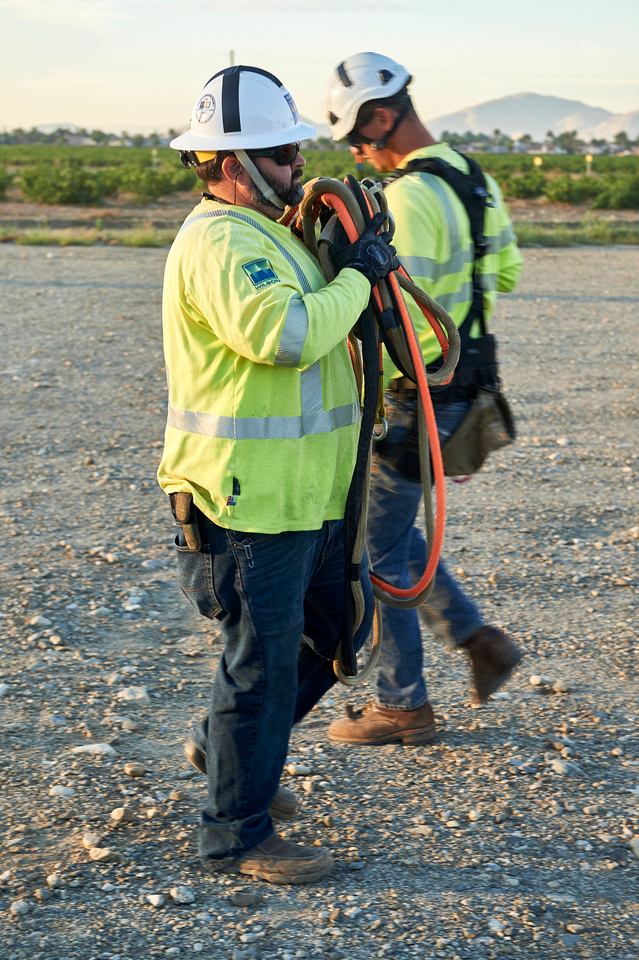 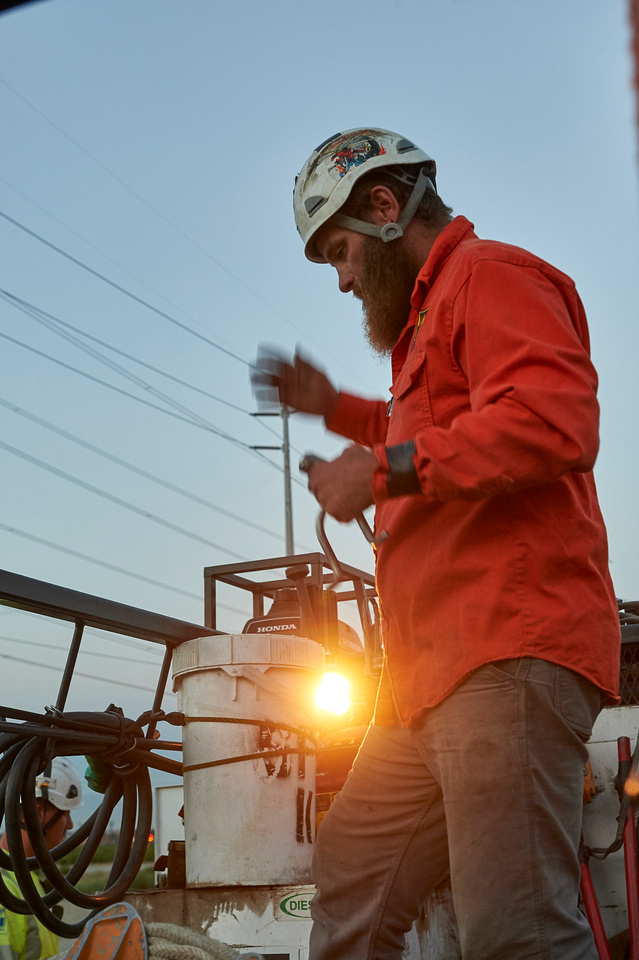 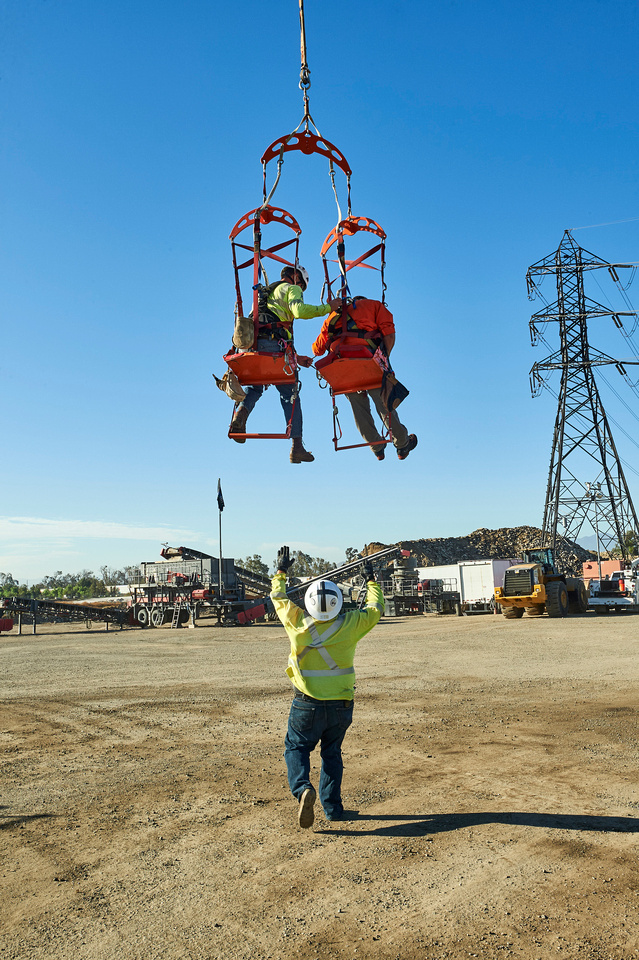 After the eighth ball was installed and the aircraft was back on the ground, we packed up my now-dusty gear and traipsed back to the hotel. It was only 8 a.m. and the free breakfast was calling us. 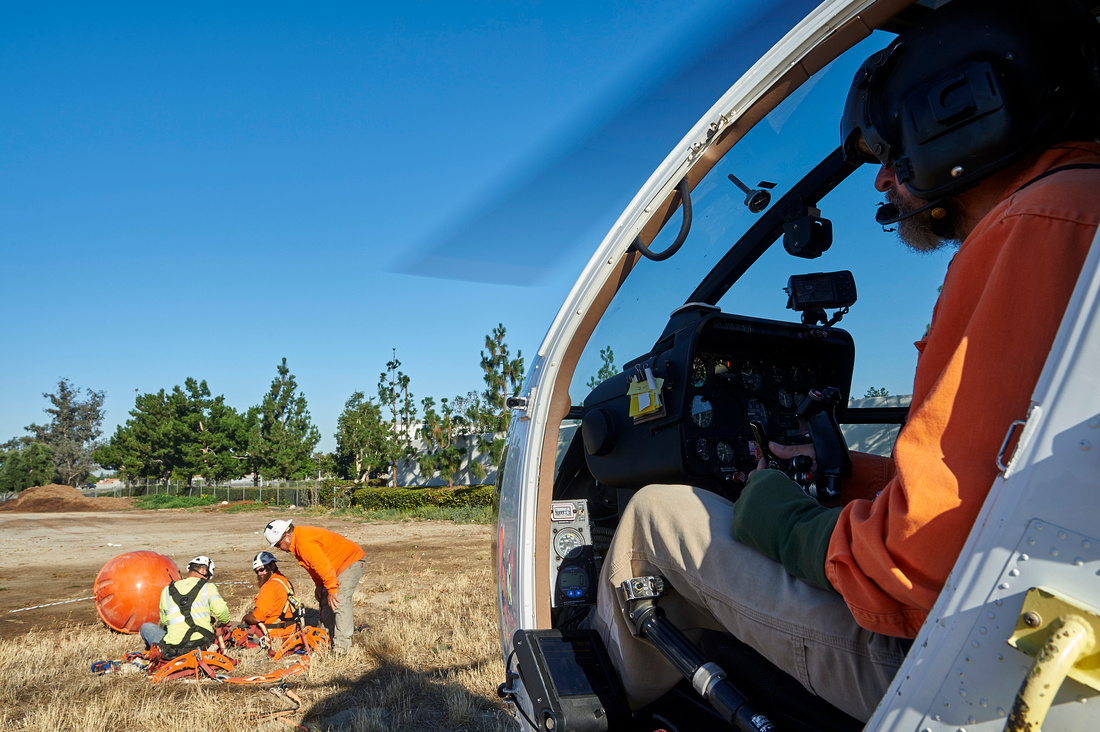 Notice the range of situations I sought out and captured; groupings of people and equipment and, especially, action (even if the action was lying on your back waiting for "go") that convey the human side of the operations. In barely three hours of work, some of it driving and much of it waiting with the crew for that "go," I captured over a thousand frames.

That number doesn't guarantee good images — you still have to be a good photographer — but the results show I chose various vantage points and camera/lens settings, moving my feet and adjusting my camera to make images that show the coordination, the connections, the humanity of the work in visually interesting ways. Take heed to do the same when it's your turn.

* Note that the operations shown here were completed prior to the availability of a certified double-hook system for this aircraft type, thus these flights were conducted under an exemption from the FAA. When such systems became available, Wilson Construction configured their aircraft accordingly.

AeroMark Images
Barry,
Were you flying or doing the install? I mentioned to the pilot, above, a robotic ball installer, one that would be slung beneath a helo on a line, but would otherwise engage the line and secure the ball without the direct involvement of humans also hanging on the line, and the pilot seemed to welcome the idea (if I read his reaction correctly), as it would remove some of the stress present in this kind of operation.
Barry Cozart(non-registered)
No doubt with the proper set up the HEC 2 man attachment is absolutely the safest install process. Some of the most intense flying I’ve ever done was installing marker balls off the skid and over water. If that doesn’t suck the seat cover in - nothing will. :)
No comments posted.
Loading...
Subscribe
RSS
Recent Posts
The Frog in Your Hand From One, Many Too Many and Not Enough Background Players Opening Wide Up up up Not So Show-y Shooting the Hero The Long and Short of It Move Close and Say Aaah
Keywords
photography aviation technique composition helicopter airplane aerospace background focus Arizona
Archive
January February March April May June July August September October November December
Unless marked otherwise, all images are copyright © by Mark Bennett, all rights reserved.
User Agreement
Cancel
Continue