No Gyro? No Problem.

How do you get 1,200 sharp air-to-air images? Apparently, you press the shutter button 2,535 times then, back in your hotel room, throw out the 1,335 blurry ones. At least that’s what I had to do on a recent photo flight. You see, my gyro stabilizer was suddenly inoperative so, to make up for not being able to depend on up-front quality, I increased the quantity.

This screen shot of my cataloging application displaying 33 images per row which, times nine rows, reveals a mere 297 of the 2,535 original captures. I didn’t bother counting up the highlighted ones visible here, but those are the blurry ones. It’s a lot. 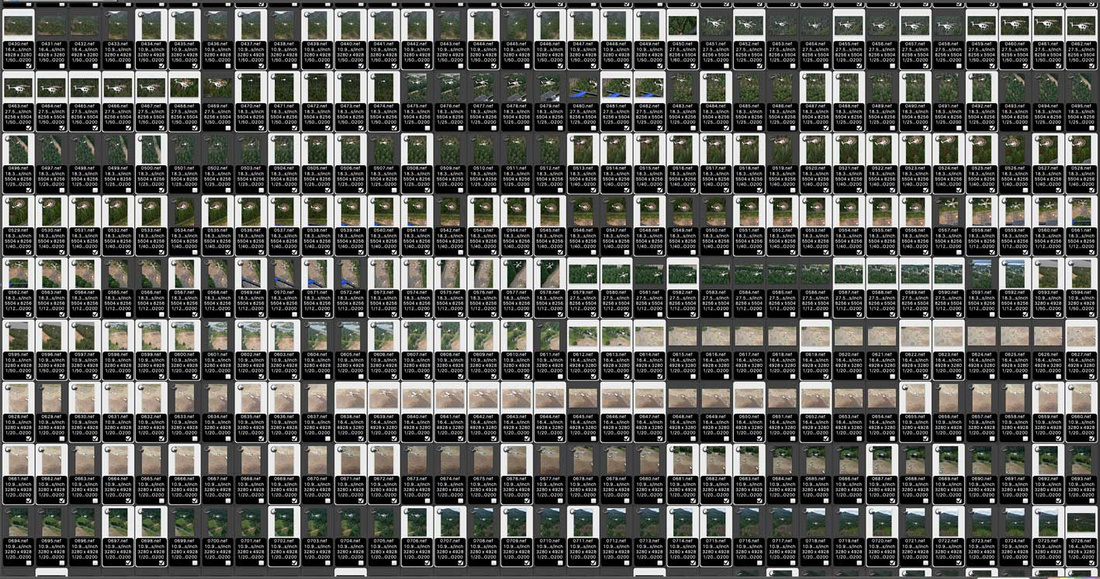 Actually, I see frame number 480 needs a check-mark too. Why is it yet unmarked? Well, the first step in my process for reviewing and choosing images has me examining each frame for sharpness which, to make sure I am being ruthless, I perform while zoomed in to just the important portion of each frame. I suppose I was zoomed into that edge of the frame and found the aircraft to be sufficiently sharp and moved to the next frame. 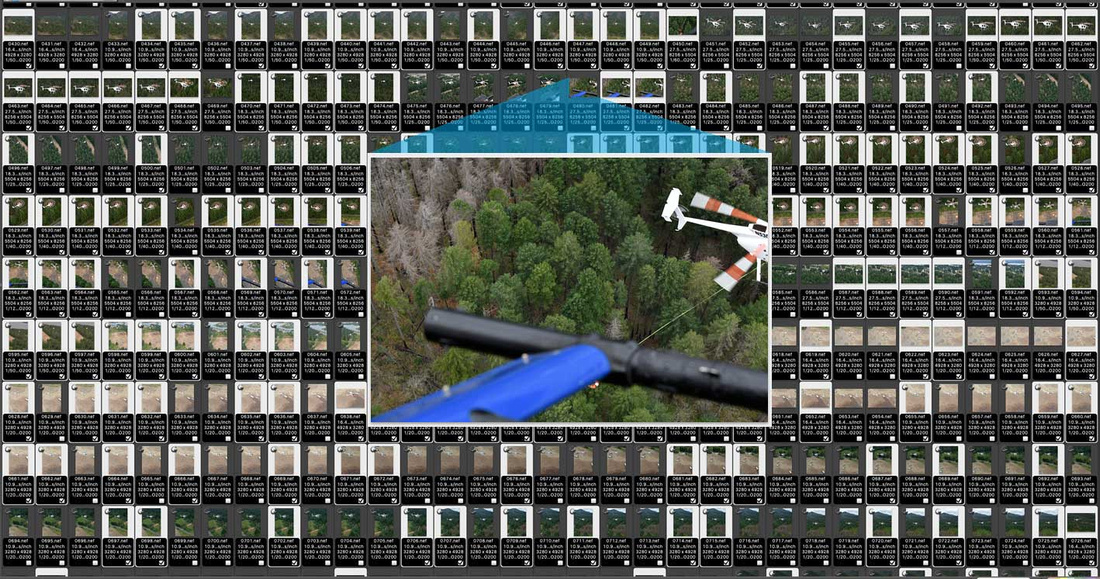 Well, not only is it not sharp but, more obviously, the target is mostly out of frame. I must have accidentally skipped over that one. Rest assured, it won’t be the last image I decide, upon further examination, to consign to the trash heap.

I always shoot more, plenty more, than I would ever use because of the vagaries of air-to-air photography. The other aircraft is moving, my aircraft is moving, the background is changing, the lighting is changing, the air is seldom still, and rotor blades appear wherever the hell they feel like it, sometimes obscuring a feature on the aircraft or background, or just looking awkward. 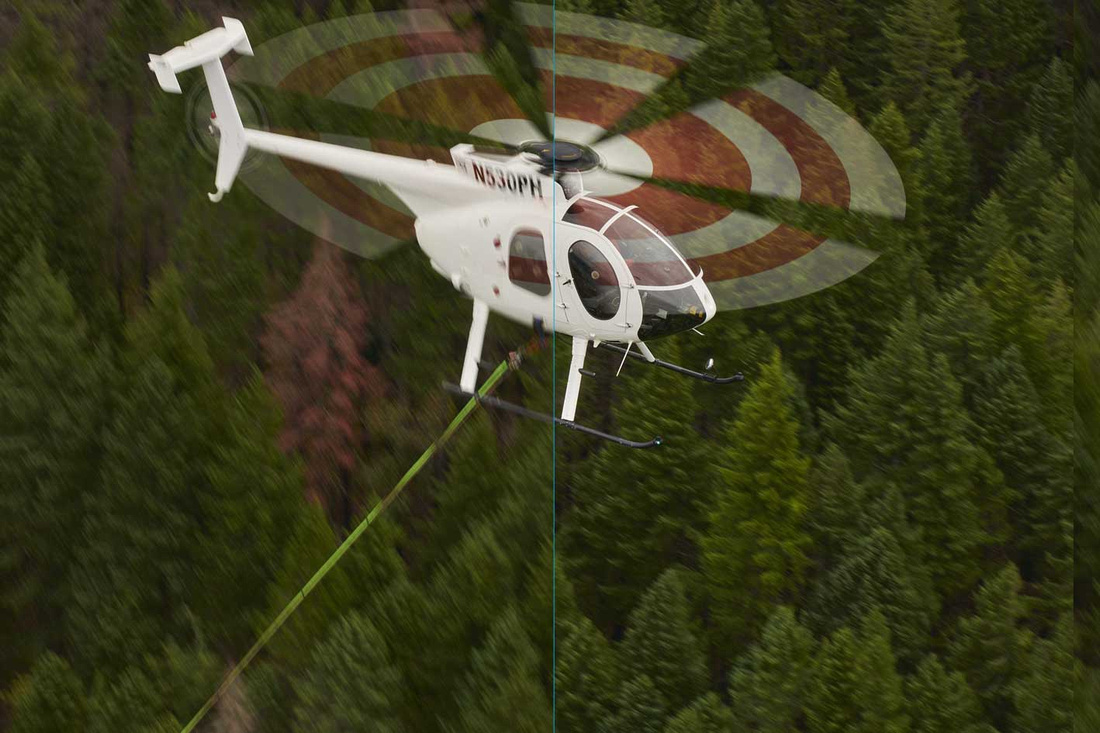 This split image shows two frames shot within one second of each other. On the left, my camera was in motion relative to the target. Bad. On the right, my camera was steady on the target even though, if you look carefully, you'll note we are both moving relative to the background. Extra good. Why extra good? Because a blurry background helps the sharp target stand out against it.

As an example of wayward rotor blades, these three shots were made in barely two seconds and, believe me, I am not so skilled as to press the shutter button only when the blade is not blocking the cockpit. Any of these would be technically fine, but visually the rightmost is the most attractive.

With an operative gyro I could probably have shot fewer than half this number to yield plenty more images than I will use. But either way, gyro or not, I would shoot a lot and throw away all the bad ones. You should do the same.

The point of this little bit of prose is to give you permission, if you weren’t already comfortable doing so, to shoot, shoot, shoot.

(Shall I detail all the expenses involved in capturing those free pixels? I shall not (but you are welcome to imagine what those expenses are).) 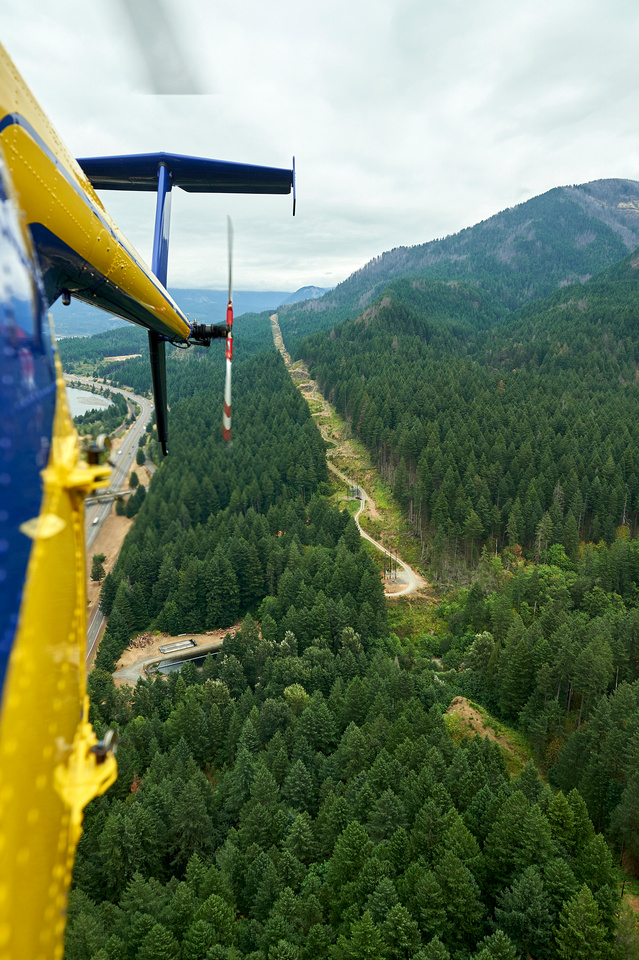 This is the view from the chase ship, to give you a sense of the scenery we were working in.

Thanks go to Wilson Construction for the opportunity to fly and shoot with them.