Telluride, Colorado. Beautiful scenery up in the mountains, yes, but when it comes to helicopter flying, the density altitude is also getting, well, up there. And though summer in the mountains isn't as warm as summer in the lowlands, combine even mountain-summer temperatures with high altitude and the amount of air feeding your engine and flowing over your rotor blades gets a double-whammy. Still, if you want to put in snow-making machinery, you don't wait until the cold weather arrives. 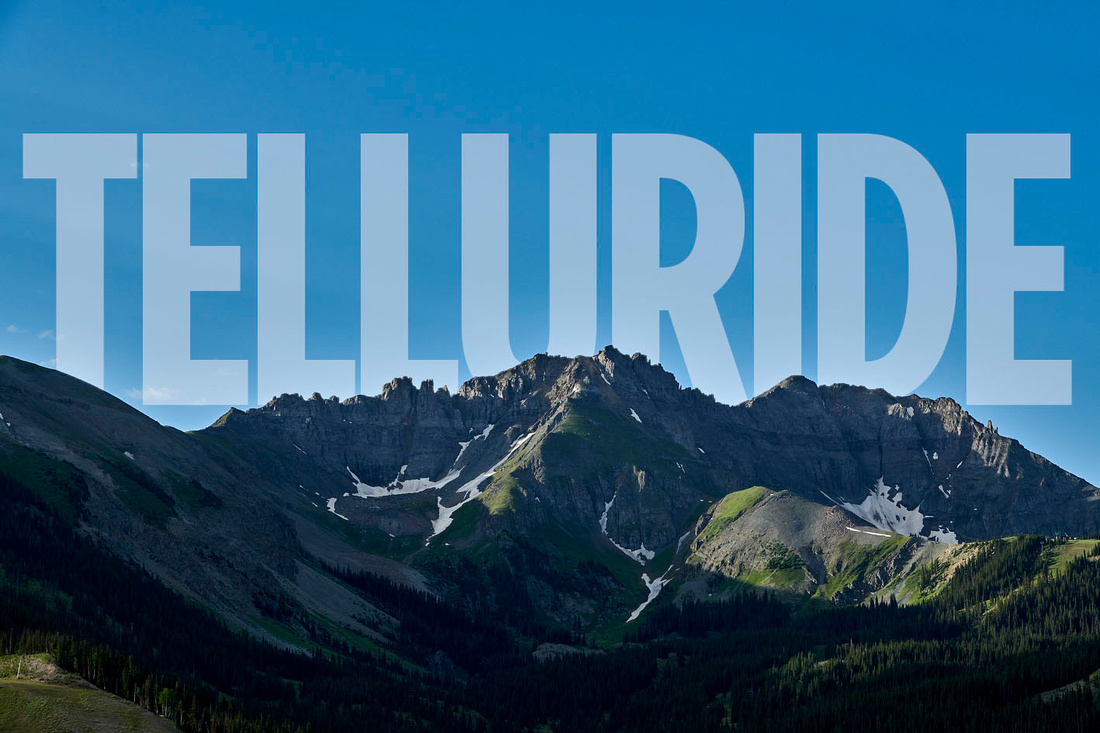 Thus it was in August that Mountain Blade Runner Helicopters, based in Montrose, Colorado, was hoisting buckets of concrete along the ski runs of Telluride. My job? Photograph the activity for Kaman Aerospace because the aircraft doing the hoisting was a K-MAX, their premier product.

Here are photos showing the aircraft and the activity. It was no accident that I captured this wide range of shots — it's what a photographer does. Read on to see what I did and learn why, so you, or a hired photographer, might do the same thorough job. 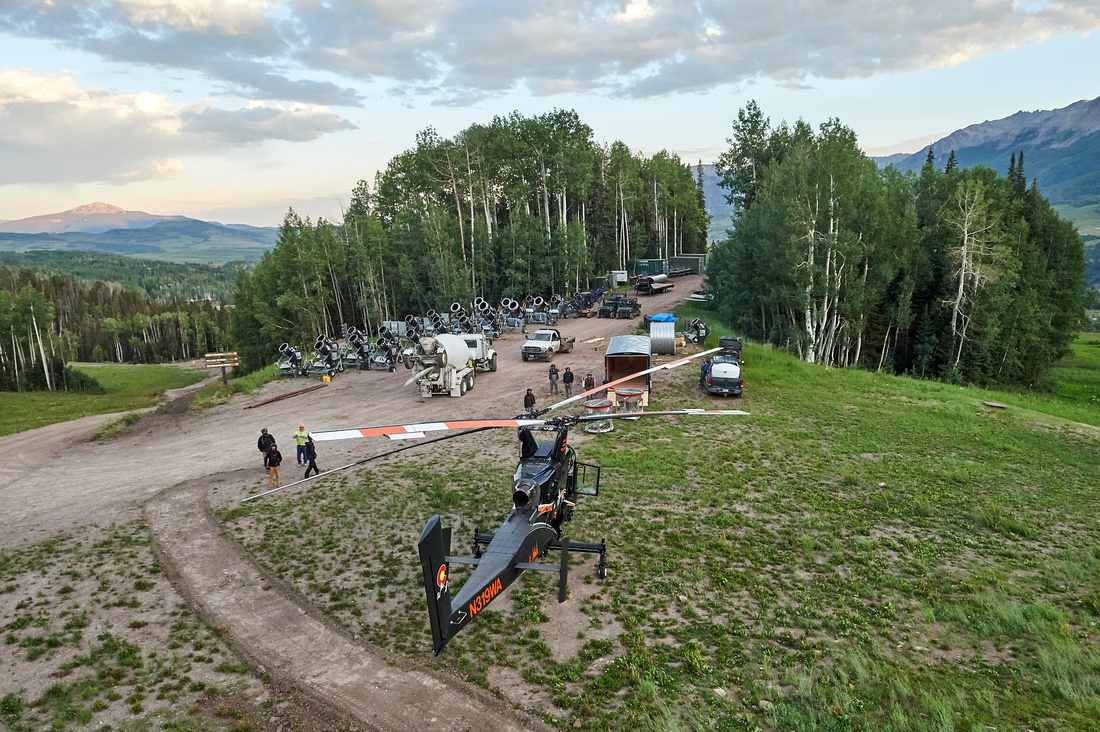 This wide composition places the K-MAX amid the other equipment and the scenery, from the concrete truck and ranks of snow-making machinery, to the trees and mountains of southwestern Colorado at 11,000 feet above sea level. Images that show only the aircraft have their place, but showing the aircraft and the environment tells the story. 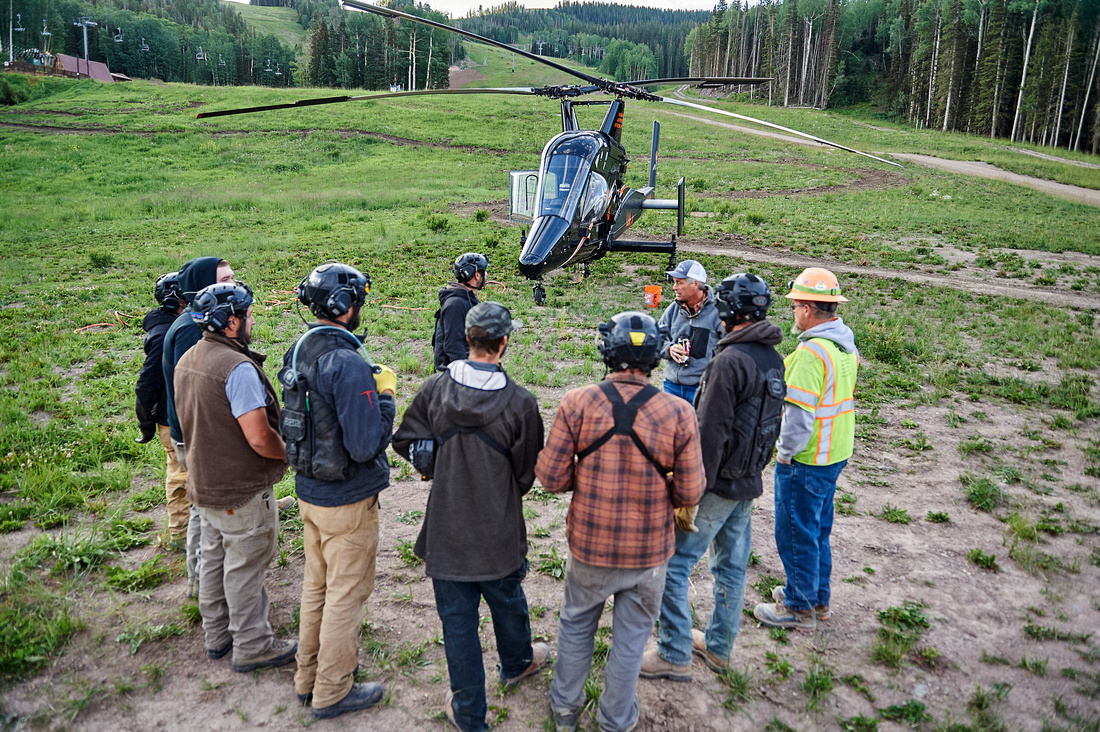 Reversing the camera position let me put the people, briefing the morning's activities, front and center, and I used the semi-circle of their arrangement to frame the aircraft. (It's harder to see in a small version of the image, but it is the aircraft that is in focus, not the crew.) This is another view of the "story," showing the people more prominently without detracting from the product. 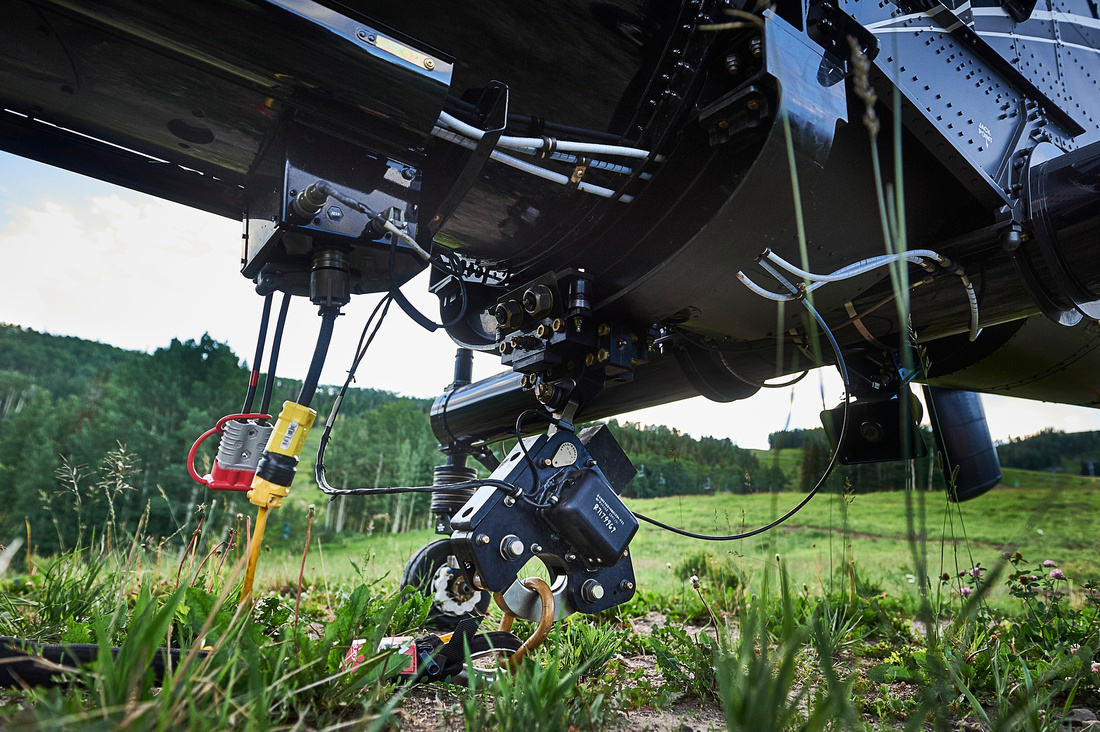 With the aircraft still on the ground, I got down on the ground, too, to show the details of the business end of the K-MAX, the trolley that rides in that wide-U-shaped track, from which 6,000 pounds can be slung. No other aircraft is so designed to lift and deliver loads time after time after time. Photographically, note that only the lifting-related elements are in focus, keeping a viewer's attention where it is intended.

So I have wide shots, showing the environment, and a narrow shot showing a key feature. How about some action? 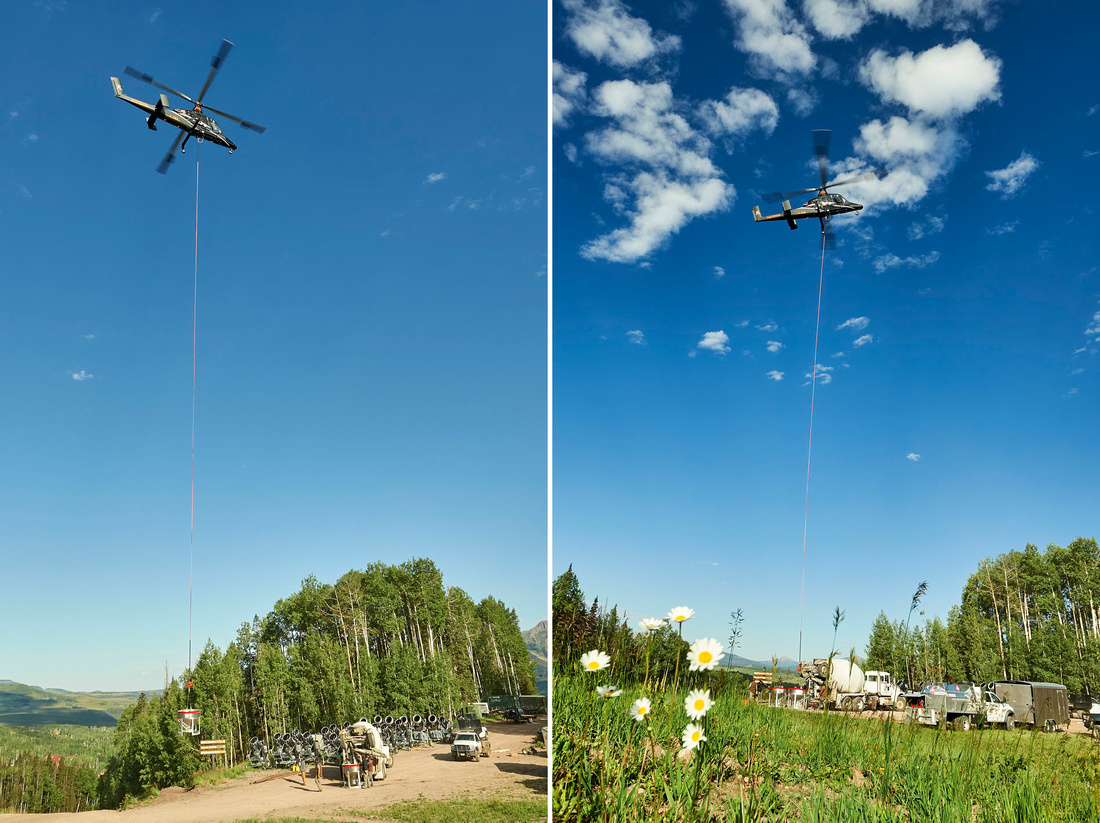 Sure, I have photos of the aircraft hovering above me, and you'll see those in a minute, but I also wanted to show more than "aircraft against sky," so I moved up one hill and shot wide to include the ground equipment as the K-MAX was bringing a now-empty bucket back to the base, where it would be traded for a filled one. I also moved up an adjacent hill and got down in the grasses/flowers to include something of the foreground environment as another option. 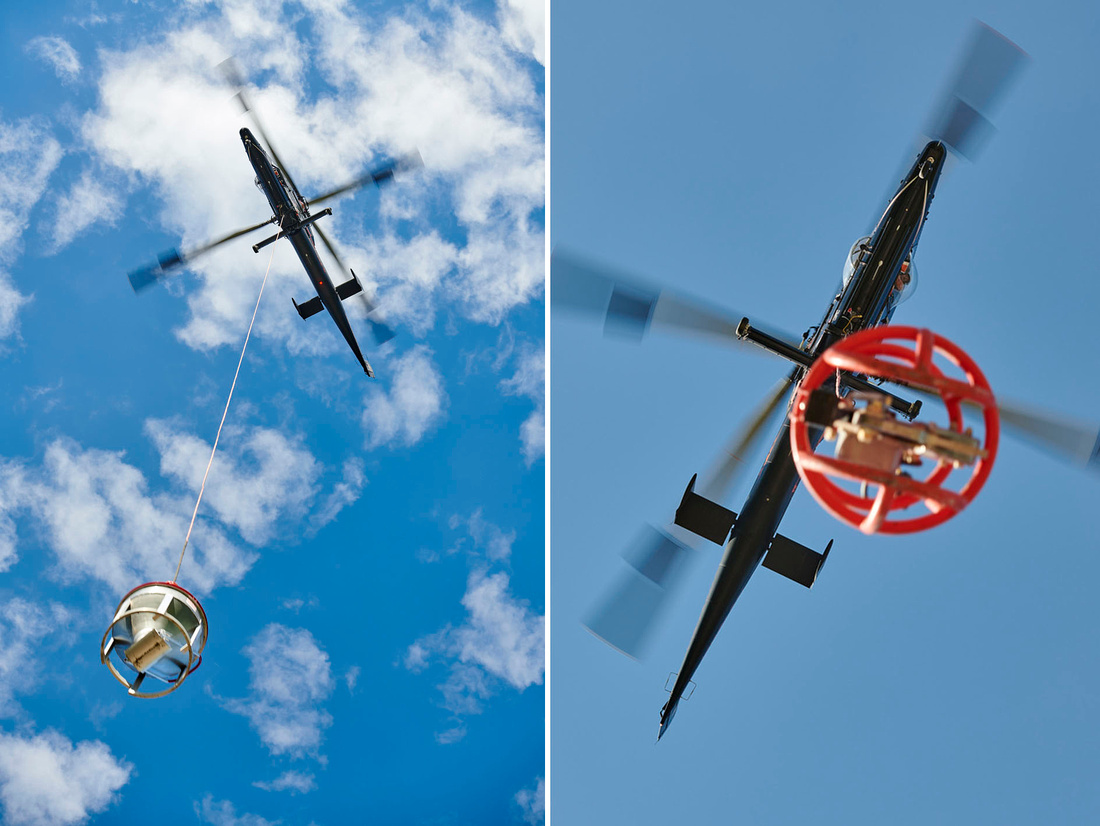 Here's a shot looking up at the aircraft as it was swinging the concrete bucket toward the waiting trucks, and one where we're gazing right at the belly of the bird, with its shrouded hook suspended between us. Yes, they are aircraft-against-sky, but more than that too. More to see and, thus, more interesting to see — on the left are clouds to enliven the image, on the right we have the pilot looking at us.

And speaking of the clouds, I'm just noticing how they came and went throughout the morning. At times it was overcast, at other times essentially cloud-free, with a range of appearances in between. Not something planned for, but it yielded photos with a wide variety of lighting conditions and graphical elements. Nice. 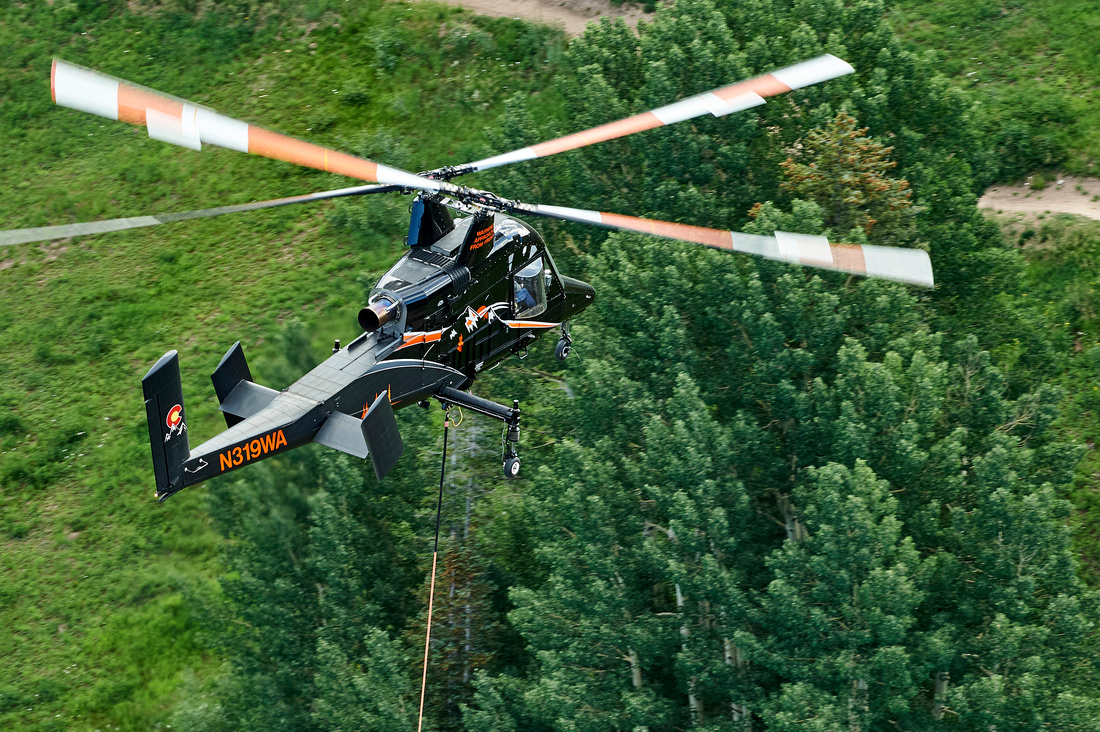 Moving to air-to-air photography, this angle shows off the shapes of the aircraft and its livery. A beauty shot, if you will, though the line draped from the belly shows this is a machine at work. 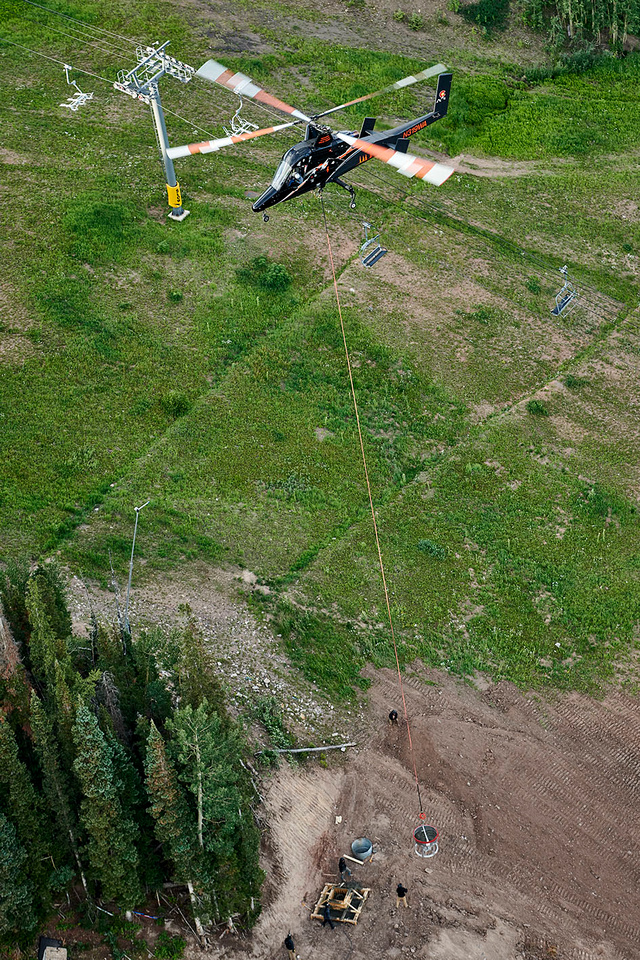 I also composed to include the work being done at the far end of the line: pouring concrete (well, about to pour concrete). 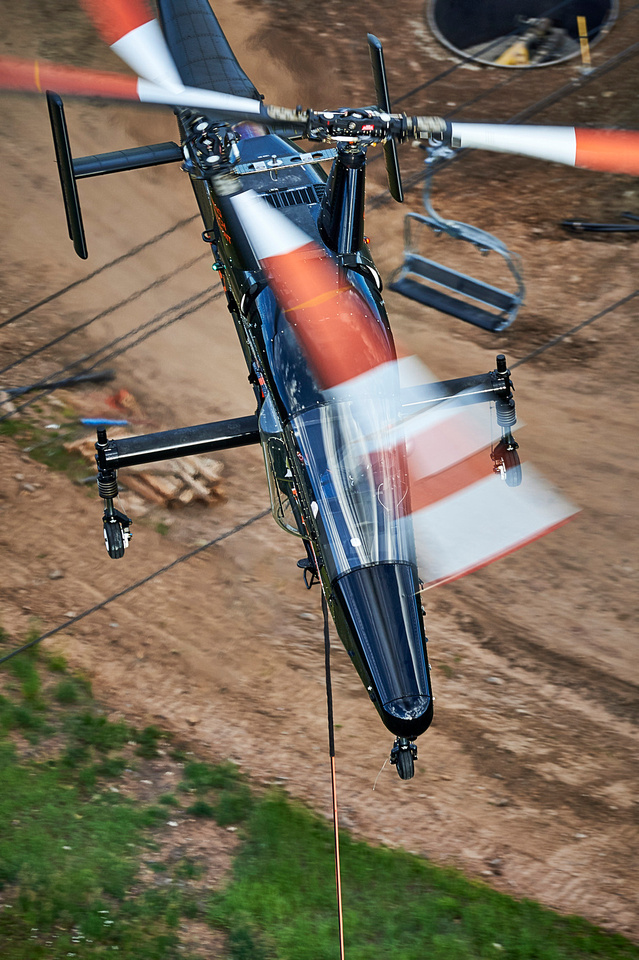 And finally, while it was a challenge to capture the action, air-to-air, due to the conditions and the limitations of the chase ship, I managed at least one strong close-up of the aircraft at work. This image went on to grace Kaman's 2020 marketing calendar (which I also designed and produced), as well as being featured, very large, in their trade show exhibit.

If you have a dynamic event to capture — a helicopter running back and forth, hauling loads of concrete in the mountains, certainly qualifies — shoot to show the action from multiple angles with a range of camera lenses and settings, to include more than the single object of your photographic desire, so you and your downstream designers have plenty to choose from and, more importantly, so your viewers will be able to see the full story.

Even if you think the photography is destined for only a single application, like an ad, you don't want to be kicking yourself — or that hired photographer — for not capturing more, when the boss says, " hey, we need a photo for social media (or company newsletter or magazine article or annual report)." She will not happy if all she hears are crickets, shuffling feet, or excuses.

(You should not be surprised to learn that the photo at the top of this article, with TELLURIDE in the sky, was yet another image from that day — you never know when you even a non-aviation shot can be part of the story.)

Thanks to Mountain Blade Runner Helicopters for the opportunity to fly and shoot with them and, of course, to Kaman for allowing me to help them tell their story.