Reflections are one way of seeing things differently, and when someone sees something differently, they want to see more. 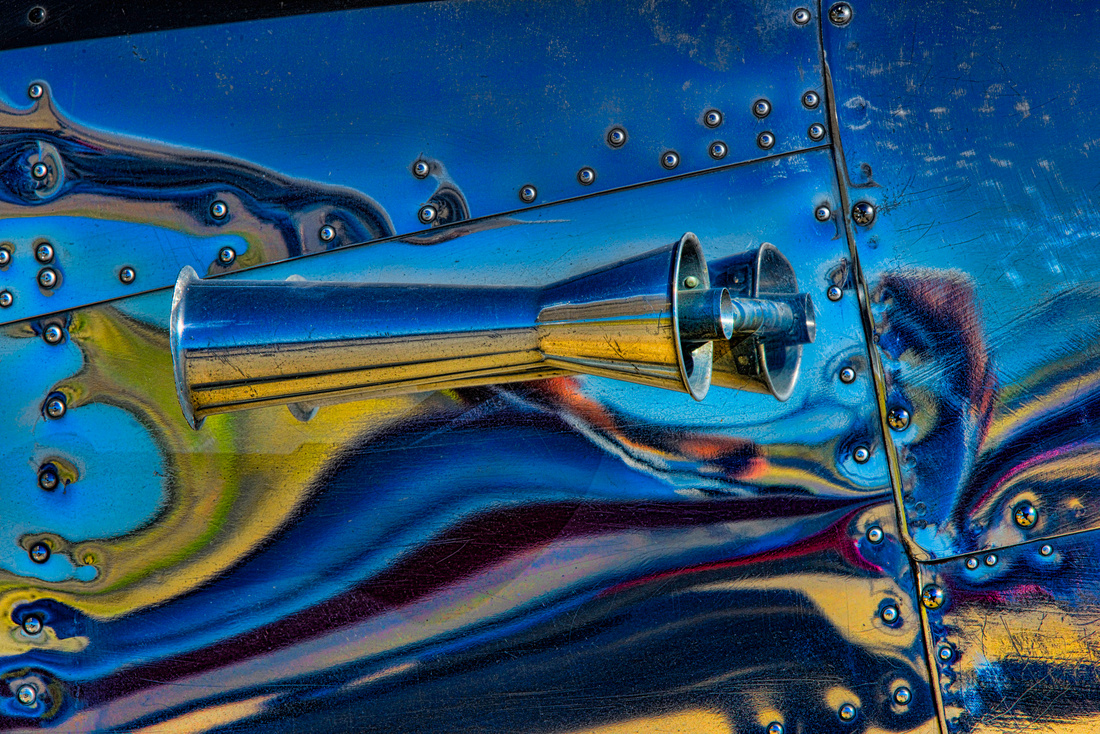 Fair enough, but before a reader reads, they first see — and if the image they see doesn't do its job of being noticed, the headline won't get to do its job. The opening photo, above, may not even be recognizable for what it is to many viewers, but it still attracts every eye that spies it. Step one? Done.

(The object in the center of the image is a venturi mounted to the side of a classic, polished aluminum, Cessna 172 — the air flowing through this device creates a vacuum which is used to drive, typically, a gyroscopic horizon on the instrument panel.)

This doesn't mean every photo has to be a masterpiece, a stark raving mad amalgam of color or detail. The photo in an ad, however, must at least cause a pause. Then the headline can take over. Etc., etc. 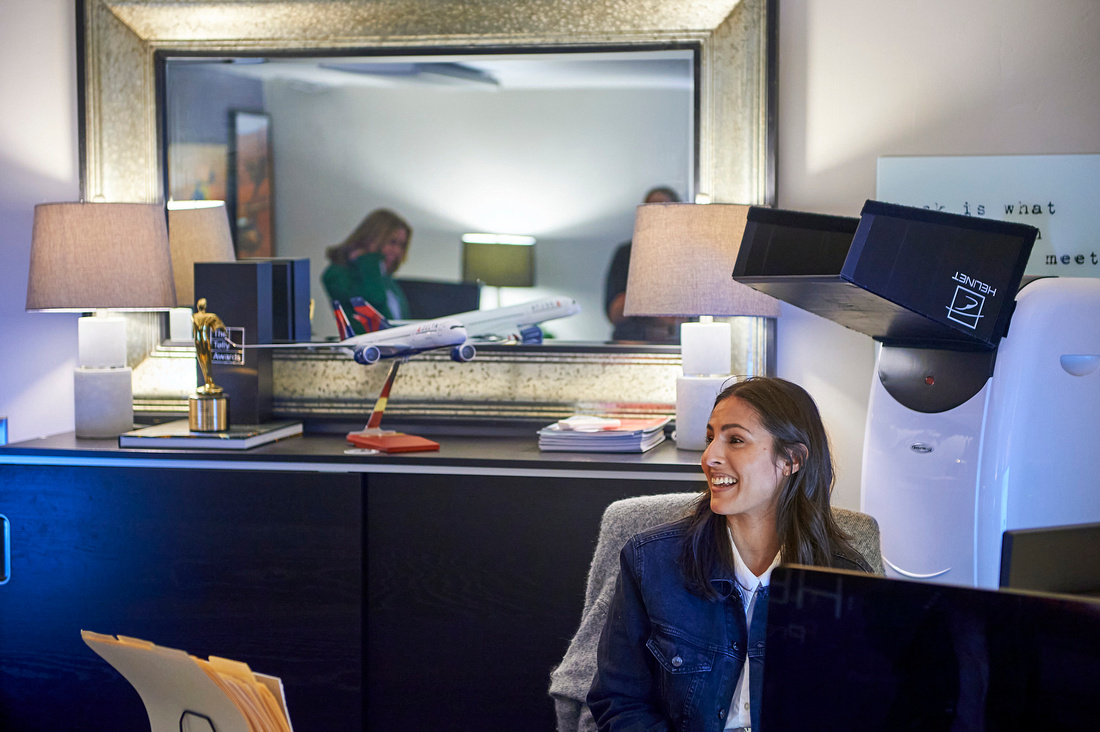 What is it about reflections? They cause a pause because they pique our interest. We know what the world looks like normally, and we've experienced enough reflections to know they show the world in a new way, whether that reflection is a faithful but flopped reproduction of a scene, in an intentional mirror, perhaps, or distorted by the reflecting surface.

The mirror behind the smiling woman, above, reveals more of the room and also the people with whom she's interacting. Our attention snaps to her smile, then to the mirrored image of the room and people. The question of why, or at what or whom, she is smiling is automatic in our minds, so giving an immediate answer is the reward for pausing. It doesn't answer all our automatic questions, but we've gained the viewer's attention and now the text can take over.

This image of an Airbus H135, shot from quite near its nose, is attracting first because of the colors and shapes of the composition, followed immediately by recognizing there are people in the image. Reflected people. The interplay of elements in the image is important — the interesting exterior details and reflected people and, through the Plexiglas, interior details plus, if we glance around the image long enough, we'll notice a pair of legs in the bottom right, standing beyond the helicopter, that appear to be, maybe? Are they? No, they aren't, but they look sorta like the legs of the man on the right, whose upper body we see in the reflection. All of that examination takes only a little time, but it is time during which whatever the next step we intend for the viewer can be taken.

(You might have noticed the man on the right is me, looking at the camera that is capturing this image. By not having the camera plastered in front of my face, a viewer doesn't immediately identify this person as the picture-taker. Not an accident, that.) 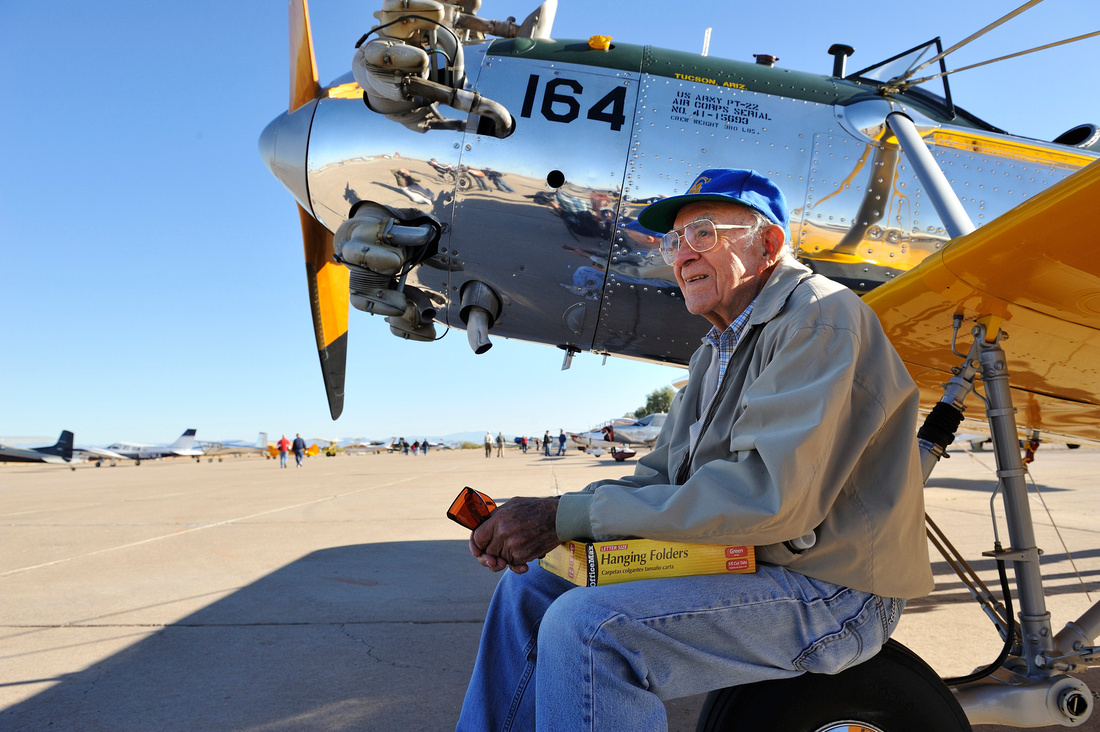 The image of the older gentleman sitting on the tire of what is actually a somewhat younger airplane, makes use of the reflection in the polished aluminum in a more subtle way. We are not immediately drawn to the reflections, but when our eye wanders away from his face to the polished fuselage and cowling, the spinner and propeller, and visible engine components, we also notice the reflections in that aluminum. As with the photo of the smiling woman in front of a mirror, this reflection gives more information; broadens the scene without directly showing it.

(There is so much good happening here, beyond even the bare photography. This gentleman was the crew chief on this exact PT-22 Recruit trainer during WW II, and his father worked for Ryan Aeronautical Company, the manufacturer of these aircraft, so would have made components that are on this exact aircraft, and one (or two) pilots who had trained during the war, in this exact aircraft, were known to live within a couple hours drive of where this Recruit is based.) 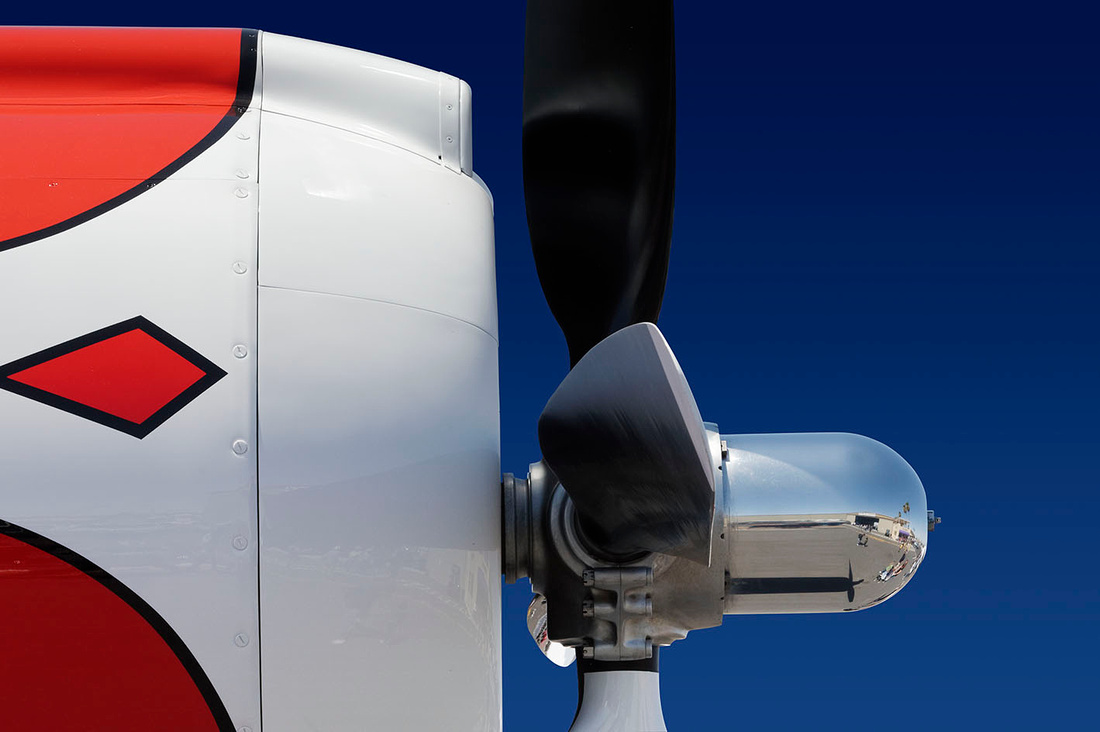 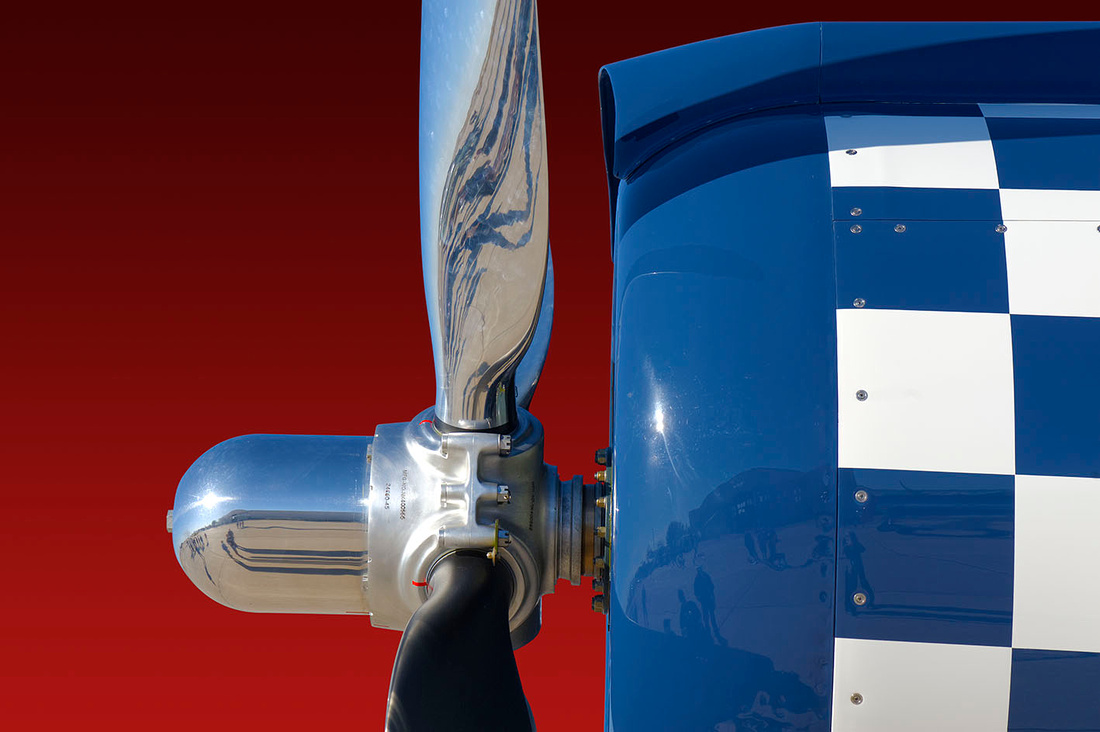 Here are two images in which the reflections are the only thing giving the aircraft their sense of place, since I've digitally replaced the "sky" in each with blended color fields. It is in those reflections, in the spinners and in the painted cowls, that we can place the airplanes in open areas (versus inside museums, perhaps) with people in attendance. So, here, the mirrored environments play decidedly secondary roles, but those roles are not without value. I've detailed some details about these aircraft, and my photography of them, at the bottom of this article. 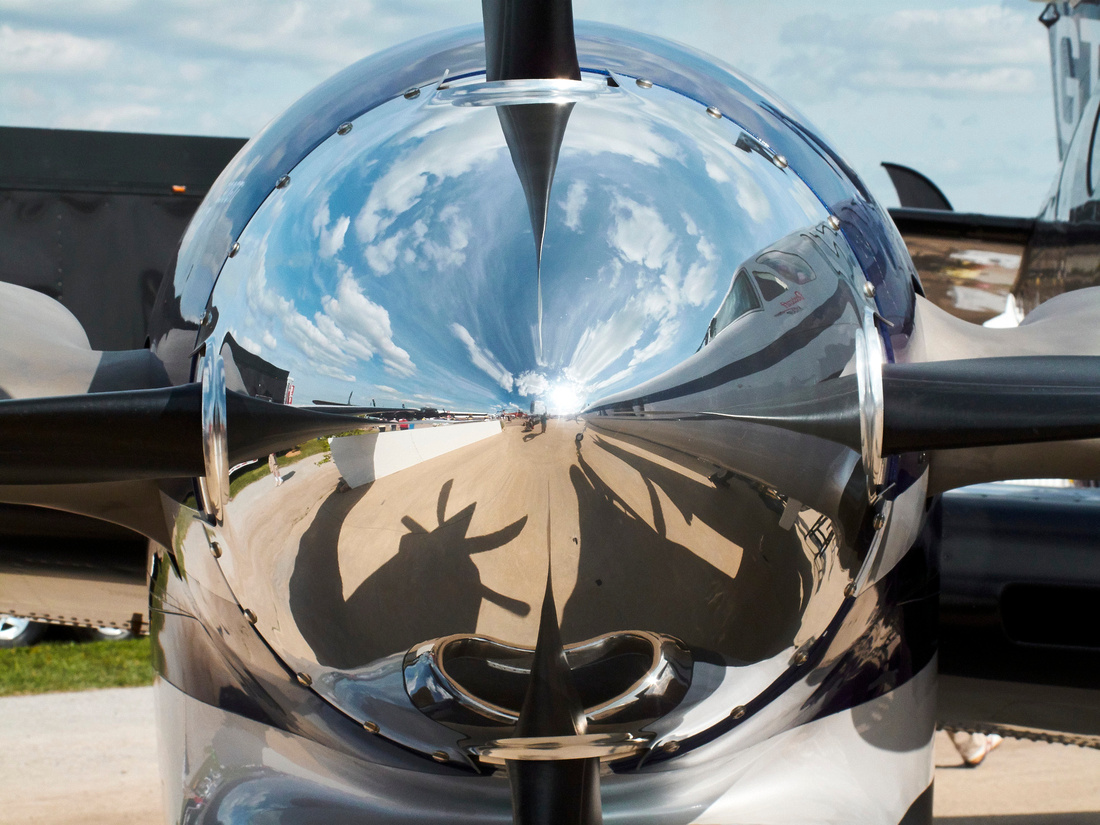 Here's another version of letting the spinner fill in the details, though in this case, most of what is interesting to see is the reflection, not the underlying object (a King Air, by the way). There is enough recognizable detail in the spinner to somewhat explain what we're seeing, but there's also the fun-house mirror aspect that works because accurately describing the details is not the point. It's just more fun, in this case, to smile at how the scene is visually distorted.

There you have it. Reflections, whether in intentional mirrors or polished aluminum, Plexiglas or glossy paint, stop our eyes because we're often delighted by what we see there. Used skillfully, they reward the viewer by delivering on that expectation for delight, and they reward the advertiser/marketer/journalist by extracting at least a little bit of the viewer's attention. What you do next with that attention is up to you.

So, What About Those Two Airplanes?

The two aircraft — red/white and blue/white — are rarities. Early in World War II, one of the companies building the F4U Corsair "gull-wing" fighter under contract was Goodyear. Well, they got it into their heads that if the Corsair was good, it was bound to be better with a bigger engine. (The Corsair had an 18-cylinder engine, the engines in these bad boys had 28 cylinders and weighed twice as much as a fully-loaded PT-22.) So Goodyear got to tweaking and engineering and building, eventually presenting to the military what was badged the F2G, commonly referred to as the Super Corsair. The red/white airplane is an F2G-1, the blue one was an F2G-2. However, the orders for these two versions were cancelled with only five of each built. Several were purchased as war surplus, including these two, then modified and flown in air races.

I photographed the blue one, known as Race 74, a couple of times over the years, including this formal, detailed, profile in January 2012. I later got it into my head that I should photograph the red one, Race 57, in a complementary way, and did so when the opportunity presented itself a mere three months later. I then developed an idea for printing the two competitors very large and selling them as a pair. That concept might look like this: 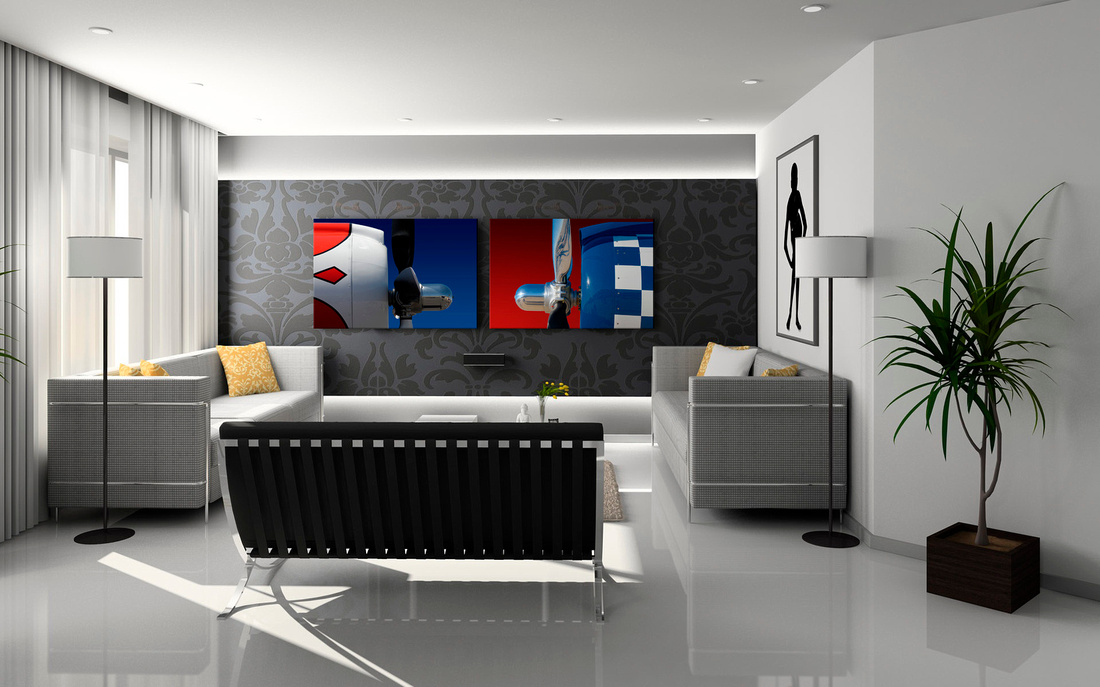 Unfortunately, 8 months to the day after I made this photo of Race 74, it crashed while practicing aerobatics, destroying the aircraft and killing the pilot/owner, Bob Odegaard. That was a very sad turn of events and I felt pursuing the printing and selling at that time was in bad taste. So I didn't. I might just revive the plan though…

If you just couldn't get enough of the very first image at the top of this article, here's a different view of the same object on the same airplane. Of course this image, and the first, have had their colors highly amplified. 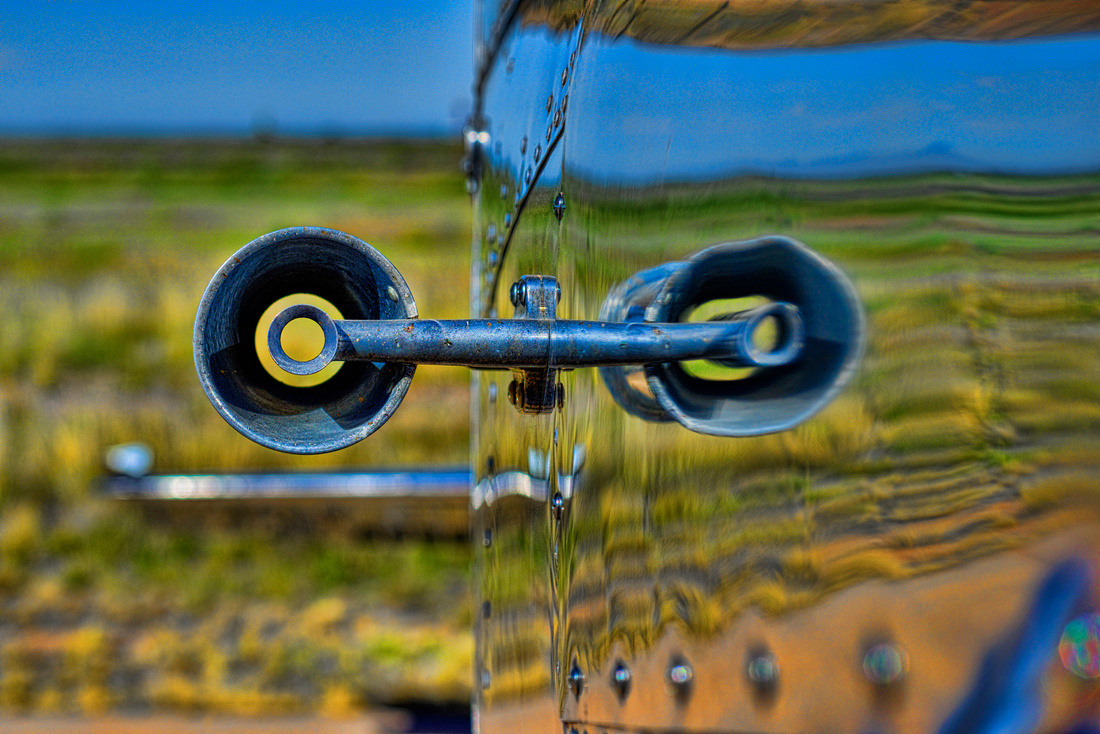