In my years as an aerospace photographer, and as the son of a USAF fighter pilot and as just a plain ol' guy who likes airplanes, I have been around many vintage aircraft. Whether in museums, at airports, or even in the wild, those older machines have a certain appeal, born of nostalgia and, probably, a more easily seen and appreciated level of technology.

Here, I share a bit of what I've been drawn to and have captured on film or in digits and, in some cases, how I altered that original image.

And I'll do that with images of one of the all-time favorite vintage aircraft, the Boeing B-17 Flying Fortress. I mean, who doesn't love the Flying Fortress?! (Don't worry if you don't actually love the it, perhaps because you've no idea what it is; the tips I'm sharing are applicable across the board.)

First I'll run through some variations on a theme, then I'll show a few more images and discuss them. Lots to see, so dig in! 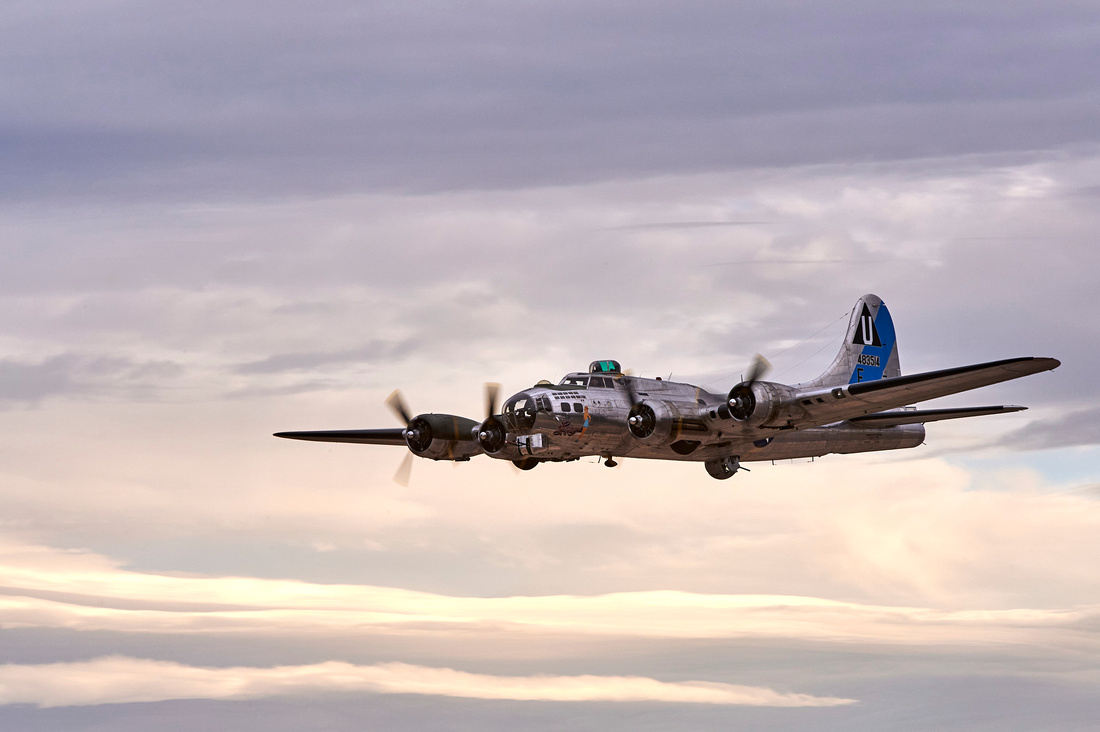 I'll start with this beauty, the B-17G "Sentimental Journey," belonging to the Commemorative Air Force. I've taken advantage of the clouds and soft lighting to capture and create a very pleasant portrait of the aircraft in flight. It appears I liked both the "warm" clouds below and the "cool" ones above, so I split the difference and placed the aircraft across the middle. I did, however, not center the aircraft left-to-right in the frame. I left space on the left for the Fortress to fly into, a place for it to go.

Folks knowledgeable about the markings on this aircraft recognize it and understand this could not be a photo from the '40s. Still, that doesn't mean we can't play with it to suggest a 75-year-old image. I'll do that in a few different ways, to show some of what's possible. 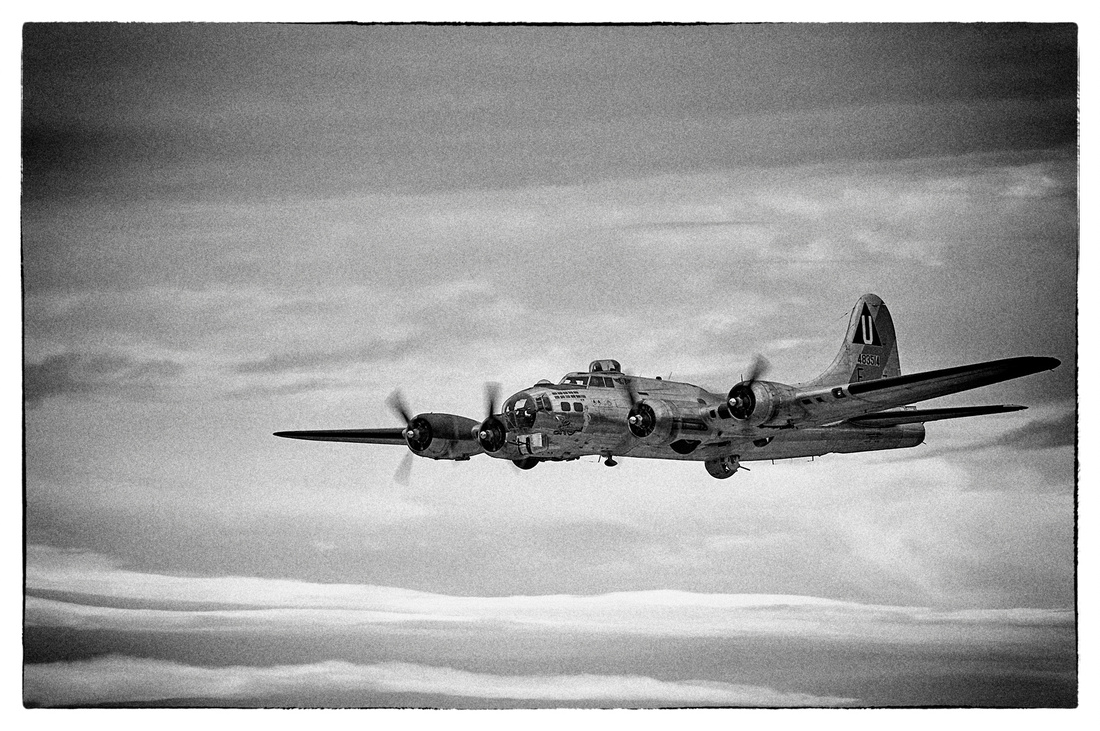 One approach is to turn it into a black-and-white image, as that film type was the most common at the time. Merely converting to black-and-white isn't quite enough to send us back to the war, though, so I've also added what would have been film "grain," the small, gritty variations in brightness that you see best in the now-gray clouds. Notice, too, the vignetting in the corners of the frame, the darkening, simulating how most lenses don't project a uniform amount of light across the entire image. Even modern lenses can suffer from this, but especially in a camera that would have been carried onboard another aircraft of that era, this was a common optical defect.

For a final touch, I added a ragged frame to what would be this "print" of the image. It is just another little message that says, "hey, old photo here!" I would note, though, that this is still a fairly clean rendition, possibly representing a modern print of an old piece of film, so let's take a more ragged approach to aging the photo. 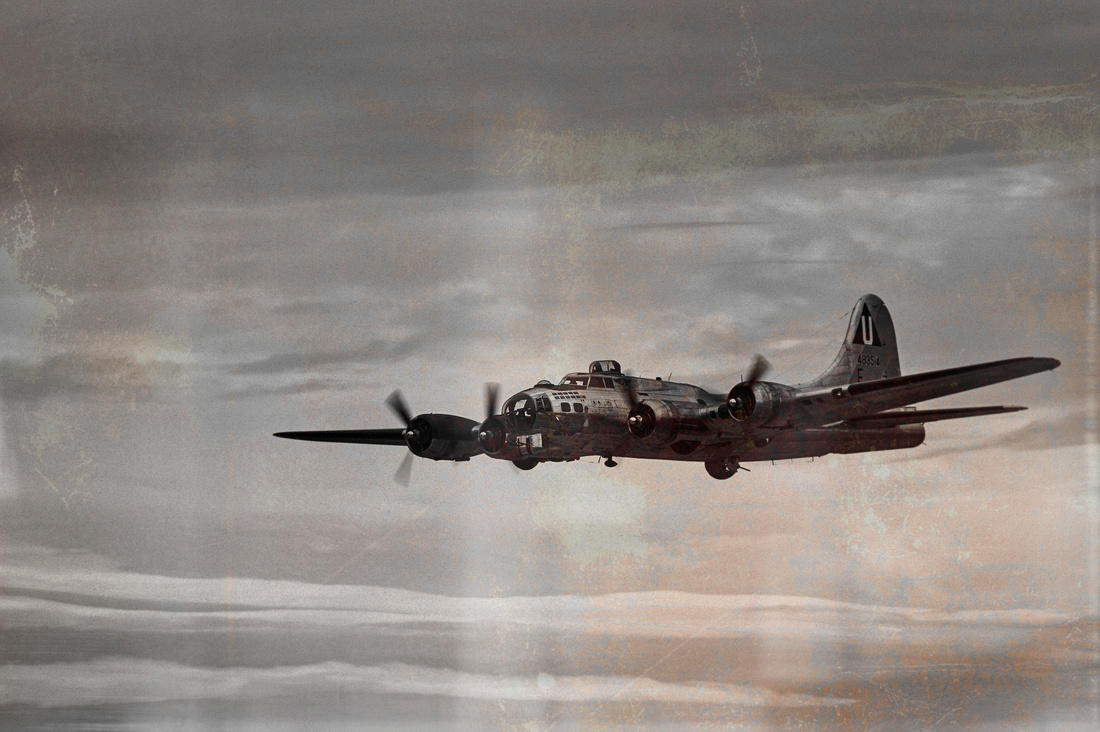 I've gone black-and-white again, but with much different settings. First, note the lower contrast and brightness. Details, especially in the shadowy areas of the aircraft, are much less distinct. The vignetting is less aggressive, but I've added streaks of paleness which, to my eye, suggest uneven chemical processing of the original 35 mm film (the proportions of the image, 3:2, suggest that film size). Then, for good measure in making this an old print of an old piece of film, I've added splotchy staining which could result from improper washing of the print when it was made all those years ago. Not all of the chemicals were removed when the print was made and, over the years, those chemicals have discolored the paper.

But color film did exist, so let's go for a color rendition and see what that could look like! 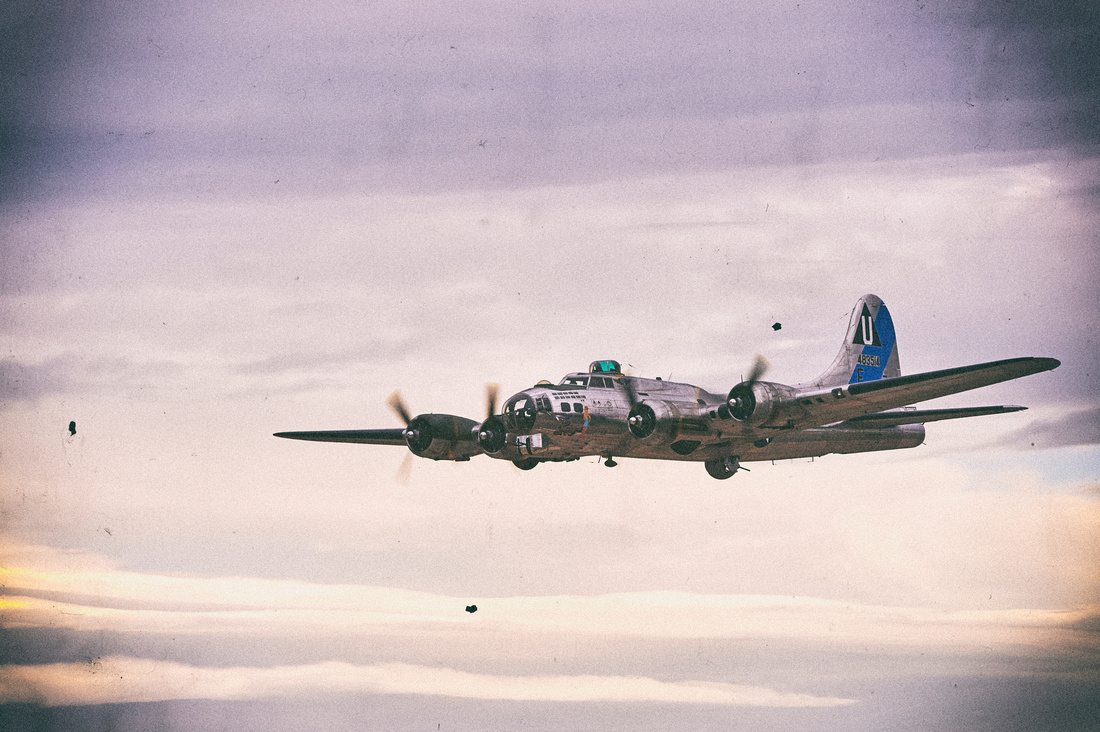 There were some good color films at the time, but their sensitivity wasn't as good as it is today, which means more graininess or slower shutter speeds — or both. And if you were in a war zone, keeping the film stored and shot within its preferred narrow range of temperatures was a problem, which can lead to even more graininess and detours from color accuracy. Plus, you know, war zone, so dirty camera and optics and iffy processing. In this image I've got the graininess, though I've not let the colors move too far from the original — plus flecks of dirt and that vignetting again, with some of that inconsistent chemical processing across the span of the frame.

Why "age" a modern photo? Without wandering into fooling a viewer for illegal or unethical reasons, in marketing, converting an obviously "new" product or scene to a vintage look can be eye-catching with its juxtaposition of vintage with modern. Maybe you are preparing images as a prop in a film or for the theater. Or, you might just want a photo that looks old; a print for your wall.

But let's move on, starting with an image I made many years ago, indeed, on actual film. 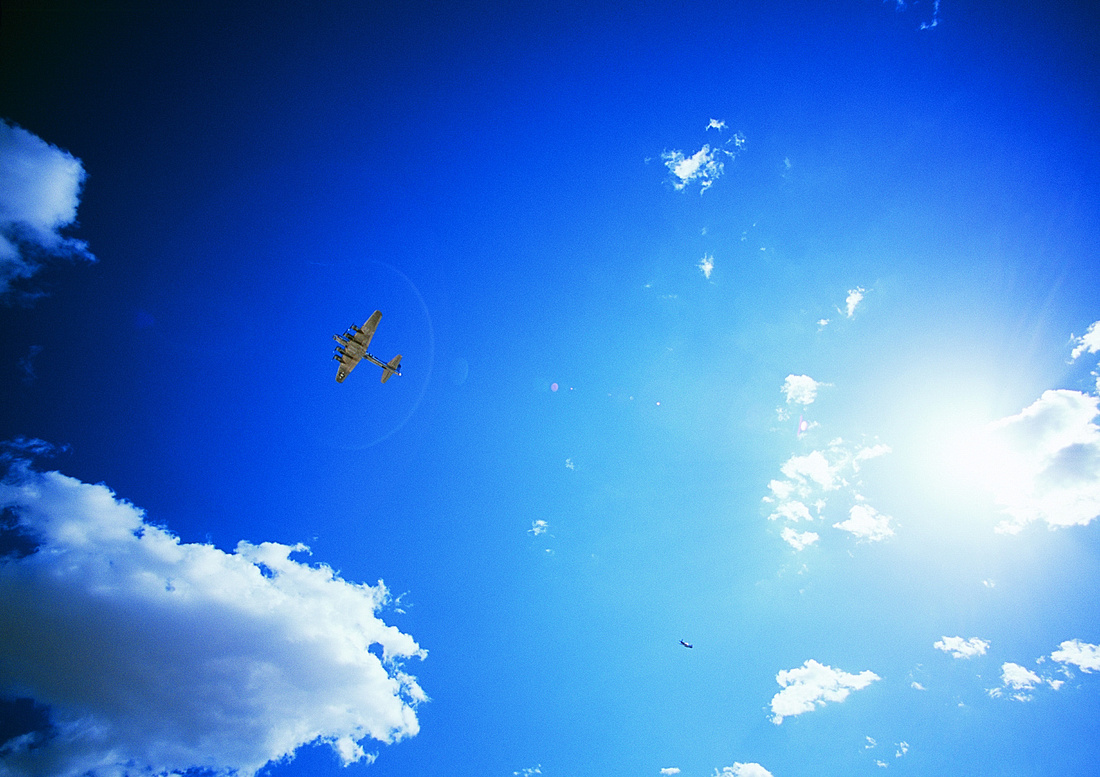 Luke AFB, west of Phoenix, Arizona, would host an annual air show back in the day. I had attended, this particular year (1990, maybe?), with my wife and my best friend, who is also an Air Force "Brat." When the show was over, we headed to my car where, just as we reached it and were putting away our gear, the B-17 from the show flew over on its way home, wherever that was. I lifted my camera to my eye and, clicking the shutter button on what turned out to be the last frame on that roll of film — and with a wide angle lens, no less — captured the aircraft. It was mere coincidence that one bit of lens flare neatly encircled the bomber, and that small, dark object toward the lower right is a P-51 Mustang, angling in to join up with the Fortress.

The lesson from this image is: be prepared, then shoot what you've got.

(By the way, notice the vignetting! That's all natural, in addition to the lens and its settings for this shot, I figure I must have had a polarizing filter fitted to the front of the lens which, by its nature, works to darken blue skies most effectively when pointing the lens 90 degrees away from the sun — thus, the sky near the sun experiences almost no darkening, while the wide-angle lens sees broadly enough that the farther from the sun, across the frame, the darker the effect.) 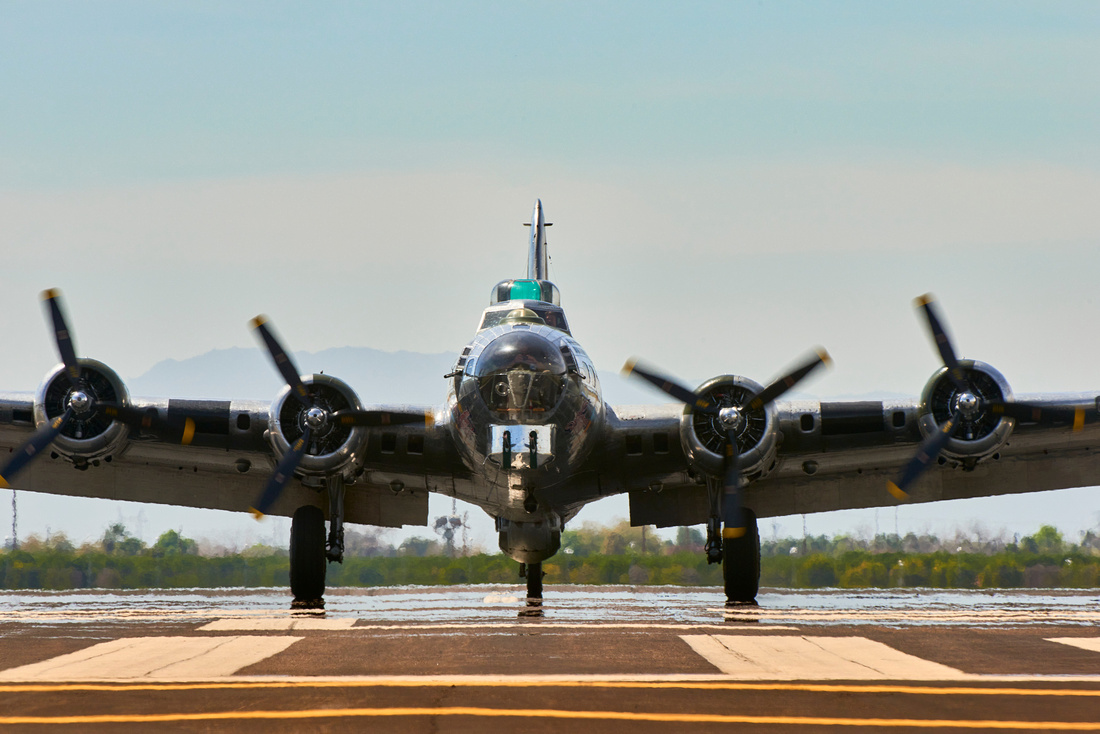 This B-17 is taxiing toward us, its low ground speed making it easier for me to balance competing blurs — one blur I want, the other I don't.

Keeping blur in the propeller blades is important, aesthetically, so keeping the shutter open a long time is how that is accomplished. Blurred blades show the engines are turning and, thus, the aircraft is being powered along. Keeping the shutter open for a long time while the aircraft is changing its distance to the photographer, however, could result in a blurry aircraft, which I don't want. So, to balance the two requirements I set the shutter speed for this frame at 1/400 sec. I know that doesn't sound like "a long time,' but photographically — in this scenario — it is.

Notice the amount of blade blur in the series of photos at the start of this article — the shutter speed there was 1/250 sec., allowing even blurrier blades, but I was able to track the aircraft's motion and, thus, not bring home a blurry aircraft. (I saw a photo of former President Eisenhower's first Air Force One airplane, shot just a couple of years ago as it was floating in for a landing. The photographer must have used a very short shutter speed because the propeller blades appeared to be motionless, which gives a viewer the impression that all the engines were shut down. Yikes!)

This B-17 image has other attributes that commend it, though, so I don't want you to think about only blurs.

The camera is positioned low and, thus, is looking up at the aircraft, imparting both grandeur and menace. It gives the B-17 a real "presence."

We see elements of the near foreground, then the Fortress, the treeline and, finally, the mountains and clouds. Lots of depth to the image, lots of environment, but the B-17 is the obvious subject, literally and figuratively. 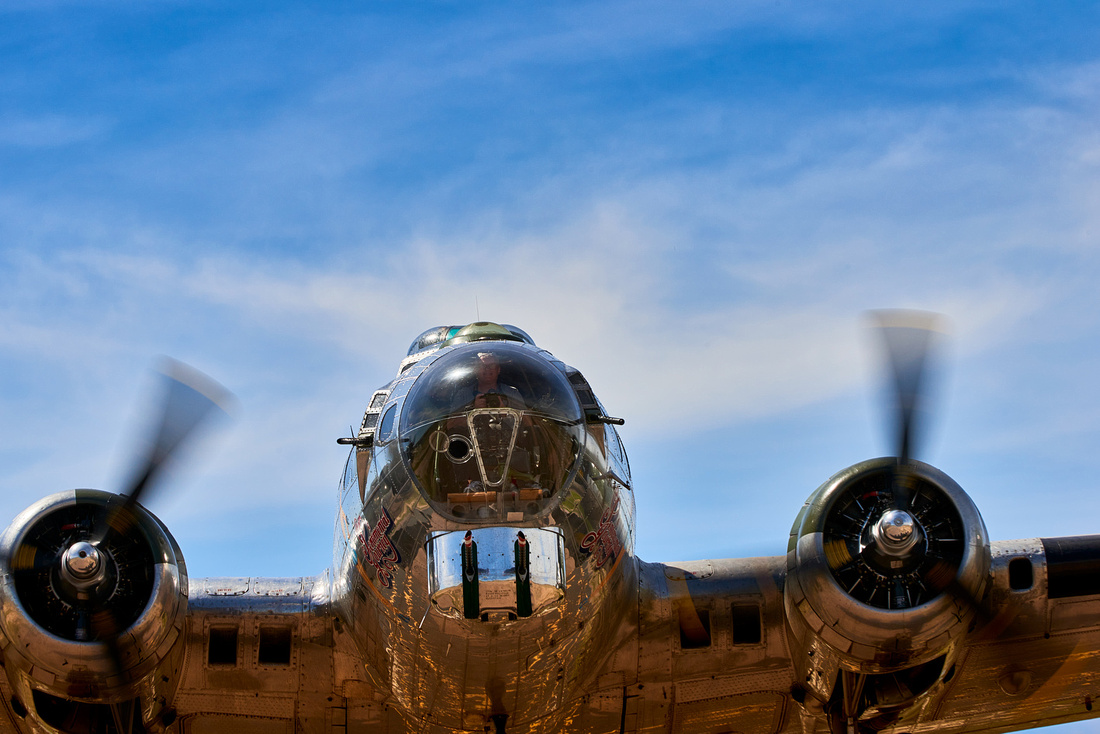 The same B-17 had, minutes before, actually lifted off that same runway, roaring over me for a quick flight. I'll convert it from color to black-and-white, intending not to appear vintage, but for its own aesthetic reasons. (Note the same 1/400 sec. shutter speed as the taxiing photo, though more blur to the blades due to the higher engine speed on take-off.) The full-color image has much to commend it — clarity, the thrill of being, essentially, overrun by a majestic machine, a slight tilt adding a bit of visual energy, and the contrasting colors of the sky and the ground, the latter reflected in the polished aluminum skin. 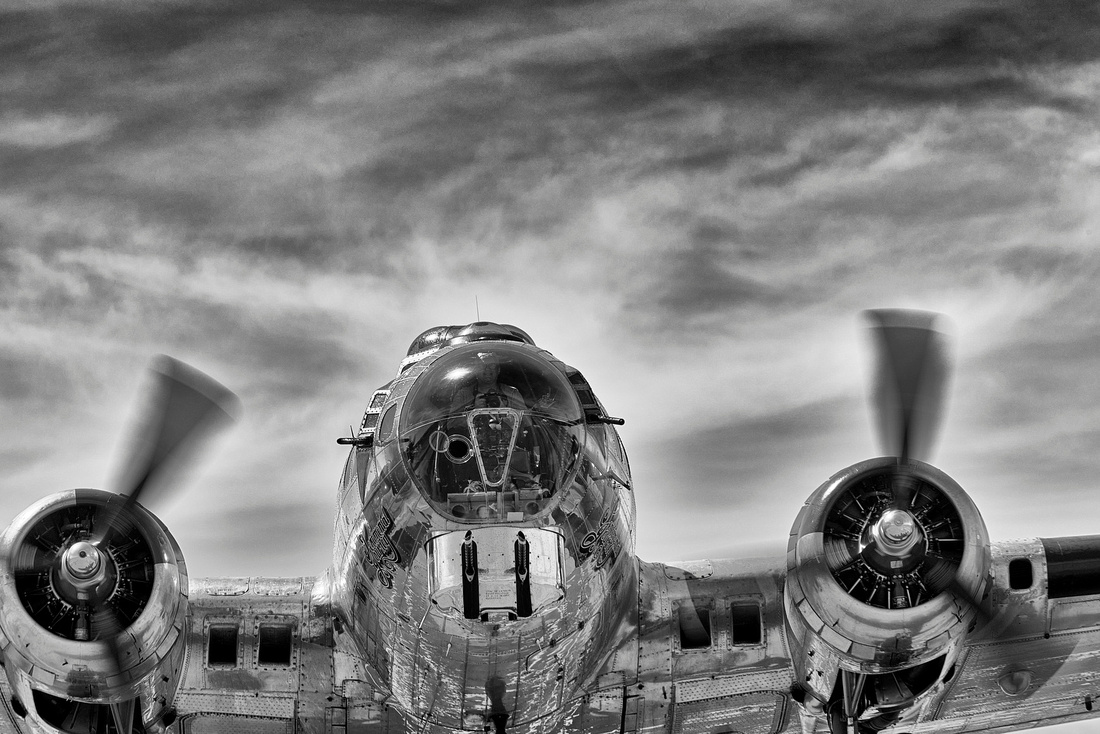 Unfortunately, that reflected ground also suggests a dinginess or griminess. By converting the image to black-and-white, though, we lose the reflected ground colors, the source of the apparent griminess, and can now better appreciate all the textures. Not just in the aircraft, either, as the overhead clouds now contrast in their softer swirls with the crisp details of the airframe.

Either might suit your needs, color or black-and-white, just keep in mind the possibilities of going black-and-white to calm unattractive or clashing colors, to bring attention to details that color might be overshadowing, to coordinate images from different sources which don't otherwise fit together stylistically, or just to be different and, thus, add a change of pace to a brochure, ad, annual report, or web site.

(You can read an article all about switching an image to black-and-white here.) 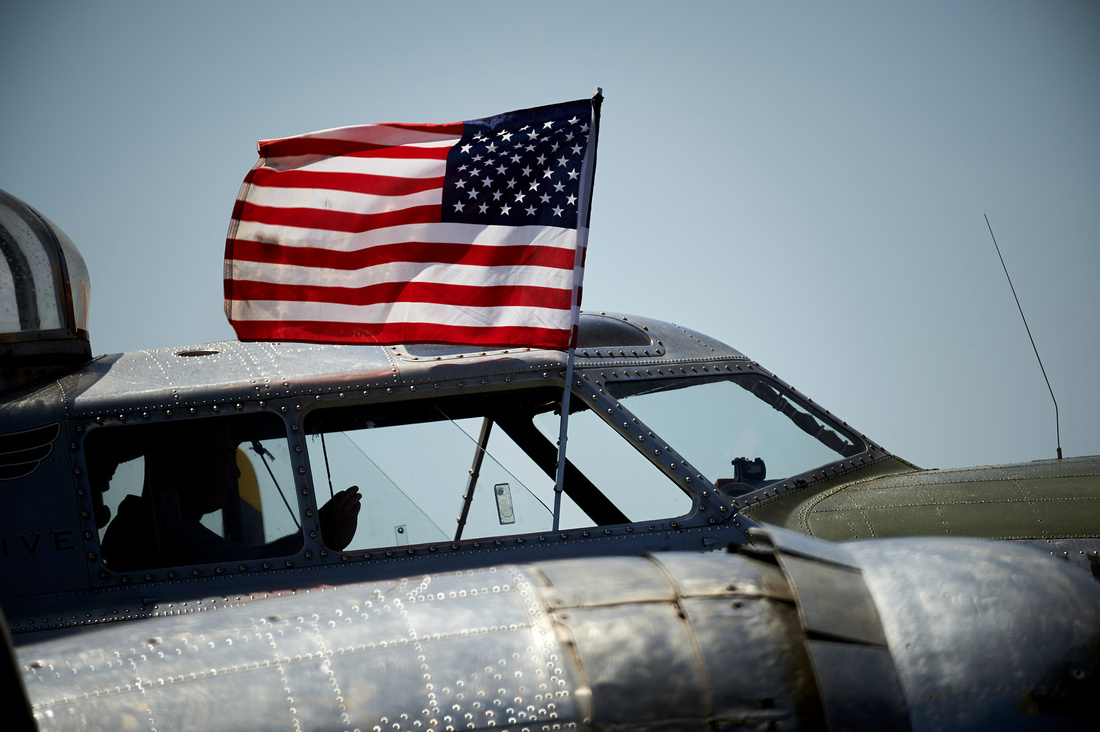 I'll wrap up with this patriotic composition, which happens to work as black-and-white and color, both, in a single image.

I was covering an airport's open house, so visitors were allowed into some aircraft, a fact I wanted to show without bringing too much attention to the particulars of the person we see inside. Beyond that, it's a detail shot that plays with shapes and forms: the various diagonal lines seen through the cockpit, the soft curves of engine cowling (bottom right corner) and top turret (at left). And in the midst of those more rigid elements, a flag snapping in the breeze.

That American flag is the only colorful element in the image. Yes, a bit of one yellow propeller tip is visible, and the sky is blue and the paint along the fuselage ahead of the pilots is green, but those colors are all very muted, barely registering as colors in the viewer's eyes. It's the flag that really stands out.

Of course, I could remove all the color, even the muted ones, except for the flag. That could work, though it does bring attention to the manipulation. In this case, I took advantage of the nature of the scene to let the flag do its patriotic duty in the otherwise dull world in which it found itself. The flag stands proud, no manipulation required.

We might be so overcome by seeing a true vintage airplane (or helicopter or fishing boat, for that matter) that we allow our emotions to short circuit our good sense of photography. Our memories or fantasies might lead us to think that just snapping a snap will yield an image that conveys all that we're feeling. Usually, it doesn't. So, yes, enjoy and fantasize, but when you put a camera to your eye, also put effort into making an image that might make, for someone else, a memory worth keeping.