I'm planning a marketing video for a client and have decided to create it in black-and-white, rather than full color. There are practical reasons and aesthetic ones, both, that can inform such a decision, and exploring those reasons and showing examples, using still photography, is what I'll do today.

These examples, by the way, are heavy in the "space" portion of aerospace, and start with this: one of the radio telescope antennas at the Karl G. Jansky Very Large Array in western New Mexico. 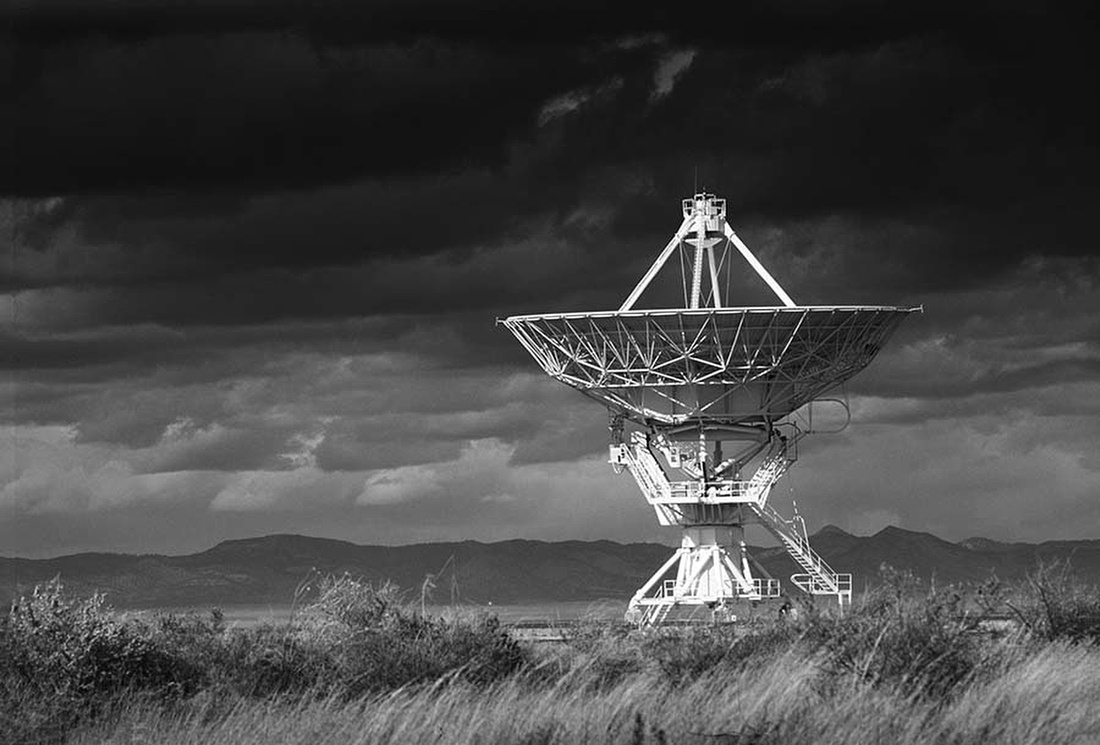 Rendering this image in b&w was a choice based simply on the aesthetics. The stark white structure silhouetted against the storm clouds is bolder and brings more attention to the antenna than the original, color, image did. (See the grass bent over in the foreground? The wind was howling a solid 30+ knots from the west, making a tripod an important tool that day.)

Unlike the following images, the VLA scene was shot on 35 mm transparency film and scanned into the computer, where the conversion to b&w was handled. No matter how they started, it is during that computer-based conversion that improvements can be made beyond simply converting the colors to shades of gray. But sometimes, a simple conversion is all that is necessary.

This next image, of launch pad 39A at the Kennedy Space Center Launch Complex in Florida, is a "simple" example with a deeper reason for the change. 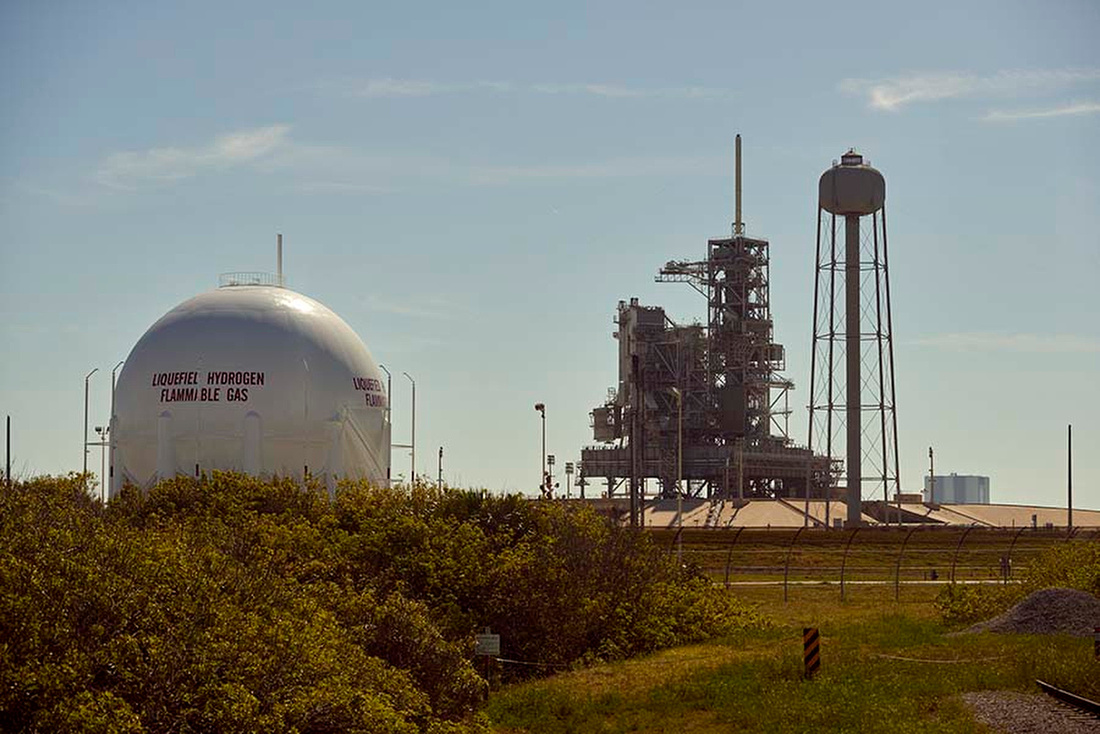 The photo is clear enough, considering it was shot from inside a bus (yeah, I didn't have any special access at KSC), but the tinted windows have played hell with the colors. Neutralizing the color of the structures leaves the foliage a sickly yellow green. Killing the color completely, though, rendering everything in shades of gray, takes care of that annoying color cast and lets us think less about some awful mutant virus attacking all the shrubs and grass, and more about the historic Saturn V/Apollo missions that launched from here.

Below, 39A without mutant viruses. Seriously — my eye was always drawn to the mustardy-green shrubbery in the bottom left of the color image, while in b&w I bounce back and forth between the liquid hydrogen sphere and the launch tower and water tower, and that means I'm thinking about the real subject of the photo. That's good. 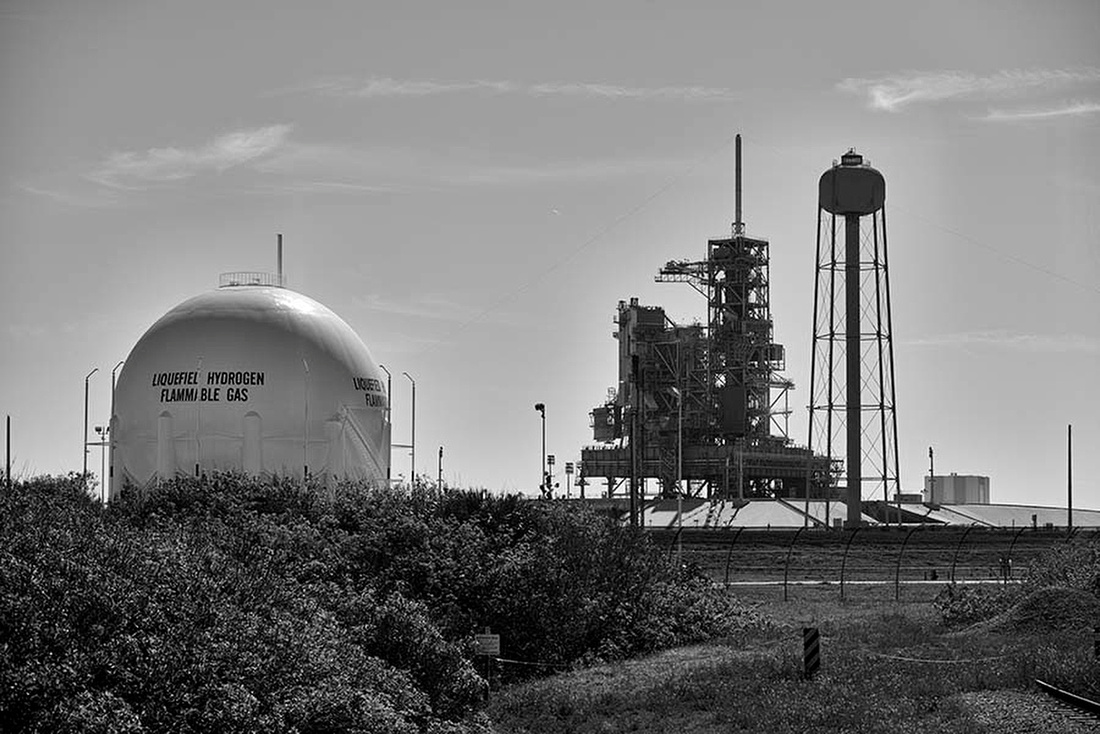 As World War II was ending in Europe, the U.S. snagged many of the people, and 30 boxcars full of matériel, related to German rocket programs. Their expertise and equipment were then incorporated into our own efforts. One item still extant from that original haul is this timer for a V-2 rocket. 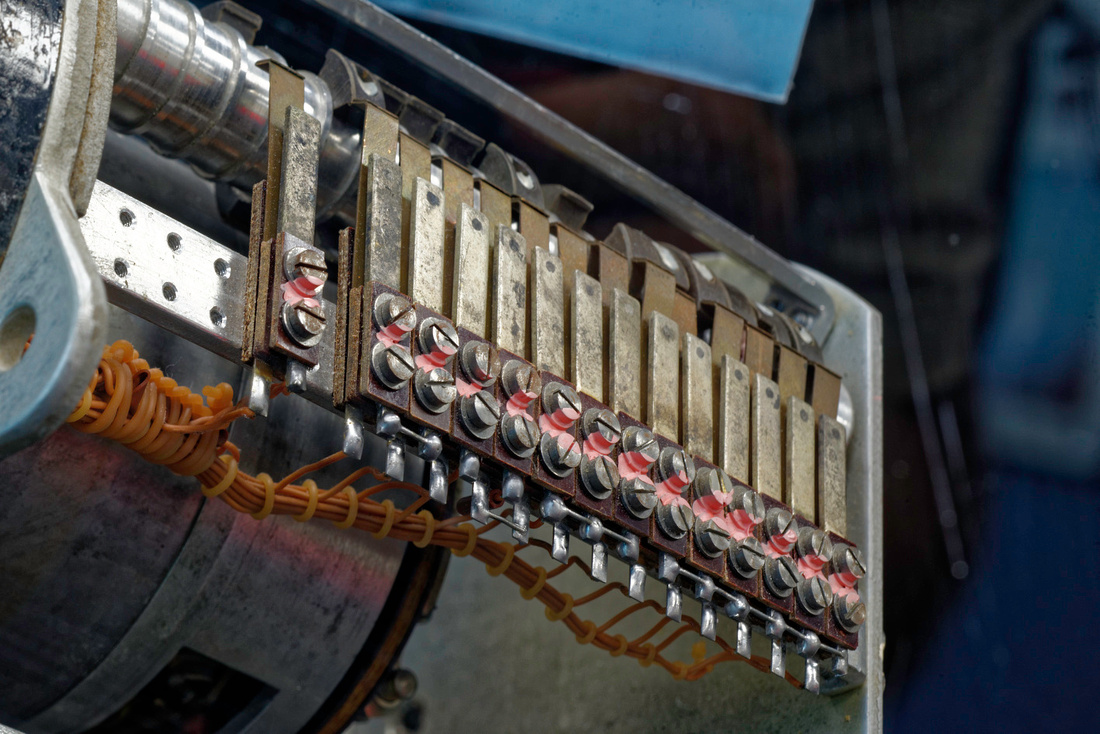 I'll note there is nothing wrong with the above photo of that timer, being clear and well composed, but a b&w rendition, shown below, might be preferred. Or not. By removing the colors, the grayscale (another term for black-and-white) image has our eyes glancing more at the piano-key switches and the screw heads, while in color we spend some time eyeing the orange wiring harness that connects them to the rest of the machine and occasionally the blue fields in the background.

The wiring harness, especially, might be distracting or it might be important to whatever story is being told by the image, unlike the ugly foliage at 39A, which is just plain annoying. For this photo, the photographer or designer might choose according to their desires or the requirements of the application, so it's nice to realize a choice can be made. 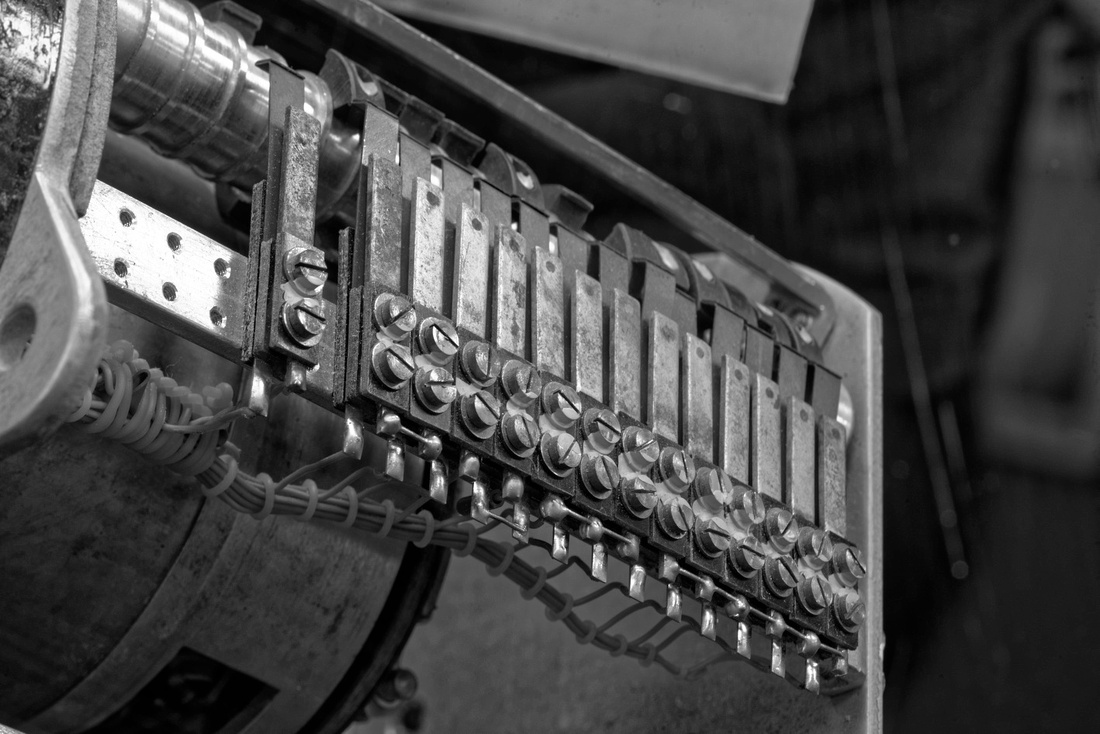 The conversion of the timer image, from color to grayscale, was made in a straightforward manner. But we can be not straightforward and punch things up if we want. This next graphic shows doing just that: punching things up. 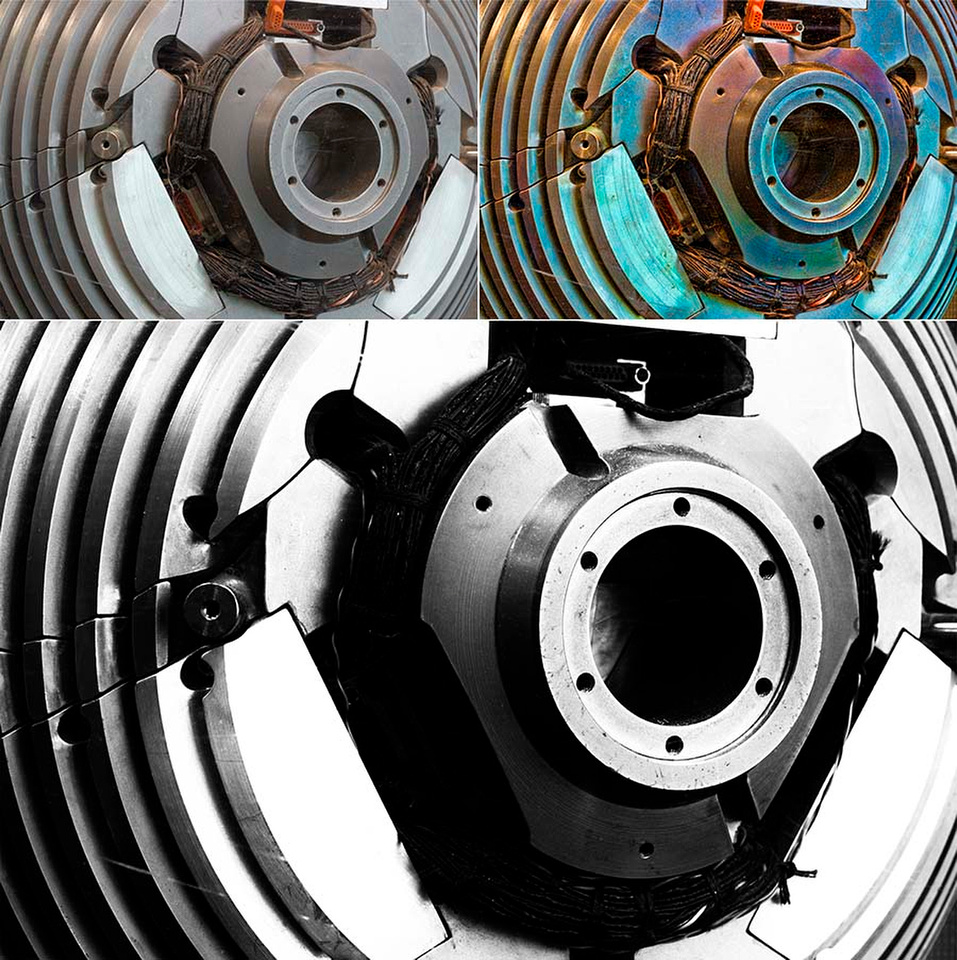 This is a guidance system used in Minuteman III missiles, called an Advanced Inertial Reference Sphere (AIRS). It looks plenty techy, even in natural colors, shown in the upper left, above. In the upper right is a version where I highly emphasized the colors that are actually contained in the image, while the largest version is in b&w with heightened contrast. Some of the darker details have been lost, as have some of the fine details in the brightest areas, resulting in a more aggressive presentation than either of the other two versions, emphasizing the shapes and bringing, perhaps, a bit of the menace of the weapon it guides.

I emboldened that AIRS image during the transition from color to grayscale without reference to the colors in the original, choosing only to increase the contrast. But the colors can be useful in making the transition, using a technique that harkens to the days of b&w film — color filters! To demonstrate, here are four versions of a portion of a Saturn V main engine, known as an F-1. 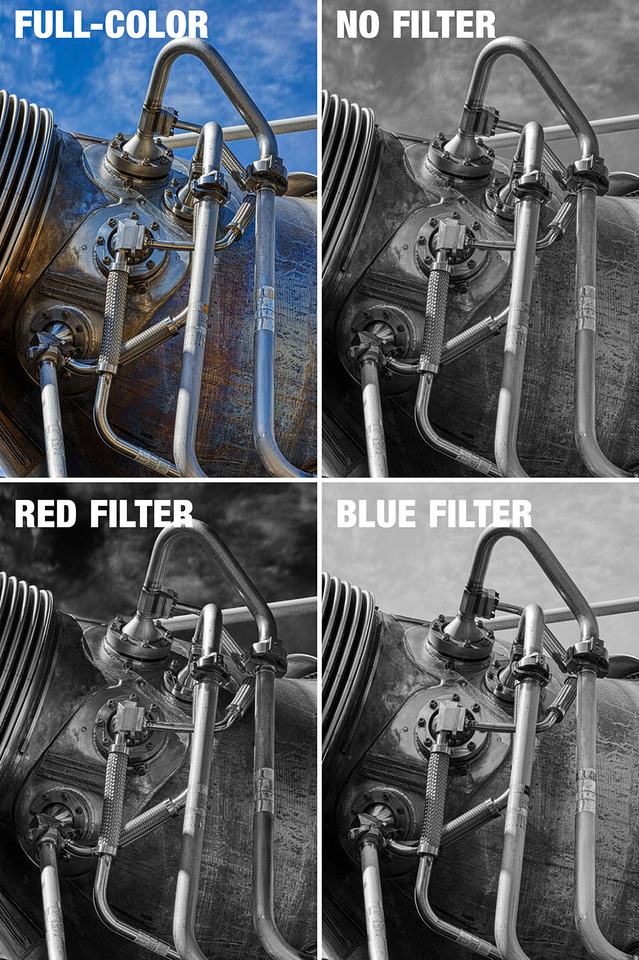 If you were not aware, placing a color filter in front of a camera lens when shooting b&w affects the intensity of light from objects or fields of color reaching the film, based on their color. A common combination is to put on a red filter when shooting a landscape, since that will reduce the intensity of the blue light reaching the film and, thus, yield a darker sky. (Red and blue are opposites on a color wheel, so a filter of one blocks the colors of other.) Red elements in such an image would be, conversely, brightened, as the filter preferentially lets red light through to the film.

In the above foursome we see the results of converting with no filtration, in the upper right, and the results as filtered through a red or through a blue filter. The most obvious difference between those three versions is, indeed, the appearance of the sky, but notice how blue reflections on some of the metal are also darkened or lightened, depending on the filter. The same goes for the warm colors, darker or lighter.

Isn't this great? Computers give us the ability to retroactively apply the effect of a color filter on a color image when converting to grayscale, with the same effects as a filter over a lens if shot on black-and-white film, yet the color and intensity of the "filter" can be manipulated at will, post-facto!

Photography, and videography, are such malleable media, allowing us — photo/videographer, journalist, marketer, artist — to manipulate imagery to better explain a concept or tell a story. And despite all the great advances in color photography brought about by modern digital cameras, and color reproduction in print or on screen, sometimes simplifying an image by removing the colors is the most effective course.

Knowing this option exists is an important first step in taking advantage of the technique. Knowing that further choices are available, to be even more communicative, makes that knowledge even more powerful.