A common approach to composition, especially among less-experienced photographers, is to place the subject in the middle of the image. This is natural if little to no thought is put into composition beyond, "make sure you can see the object/person/scene."

Such a noobie mistake is worth growing out of, and requires only a little experience, a bit of self-critique, and perhaps some guidance. The most common corrective advice regarding placing the subject in the center is to adhere to the "rule of thirds" which, if you've not heard of, search the web for that phrase and prepare to spend some time — Google returned about 87,900,000 results. Go ahead…I'll wait.

Actually, I won't. That 88 million number is real.

But I'm not here today to explain the rule of thirds. I'm not here to denounce centering the subject in a composition. I am here, instead, to declare that sometimes you want the subject in the center. The reasons and the effects of putting it there are varied, so I'll show you a range of those effects; then you can make your choices based on your own reasoning.

A subject plopped, unthinkingly, into the middle of a photo is often decried for its lack of graphical energy. By putting the visual weight of the image squarely in the center, balanced, the subject is usually static. De-energized. Look at these two examples:

The image on the left, number 1, has the aircraft centered. In number 2, the aircraft is definitely not centered. The "centered" version is not bad, but I trust you see the static nature of 1. It kinda just sits there. In 2, with all that weight on the left, there's built-in tension, energy. (There's also room to put a headline or body copy — not the point I am trying to make, but worth noting.)

Look how, in this next image, which is nearly identical to number one, something is different; something that makes it better. 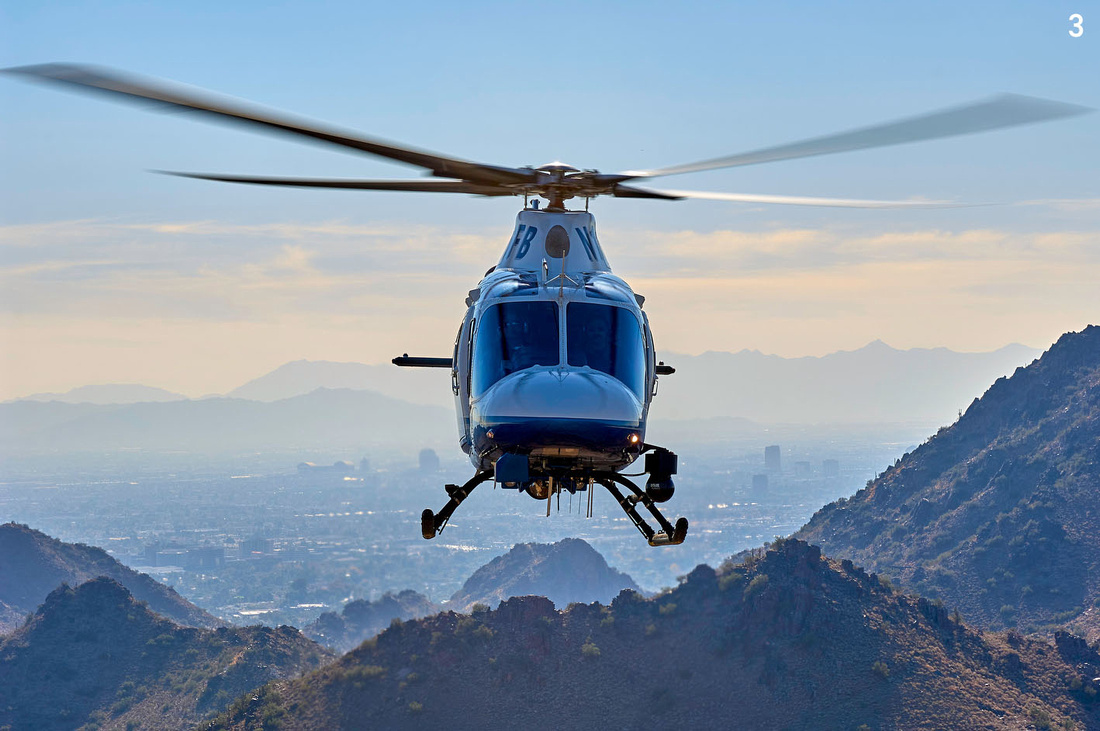 The aircraft in number 3 is more solidly in the middle, rather than being almost in the middle like number 1. And although I didn't catch this A119 exactly head-on, in 3 it's closer to head-on and that also makes a difference. Do you see it? Almost centered versus definitely centered, and not-quite head-on versus exactly (okay, more-exactly) head-on? I feel a big difference between them, a difference in power akin to the difference between "Oh, hi. Yoo-hoo," versus "I. Am. Here."

And that is why you would purposefully and carefully center the subject: It brings the most attention to the subject and, in turn, to the viewer. If that is the right approach, though, you have to really shoot for it.

Here's another "I'm looking right at you, kid" composition. This electronics test bed Boeing 707 had just returned to Libby Army Airfield on Fort Huachuca, Arizona. It is bold, powerful, confrontational. If you want those qualities, this is one way to get them. 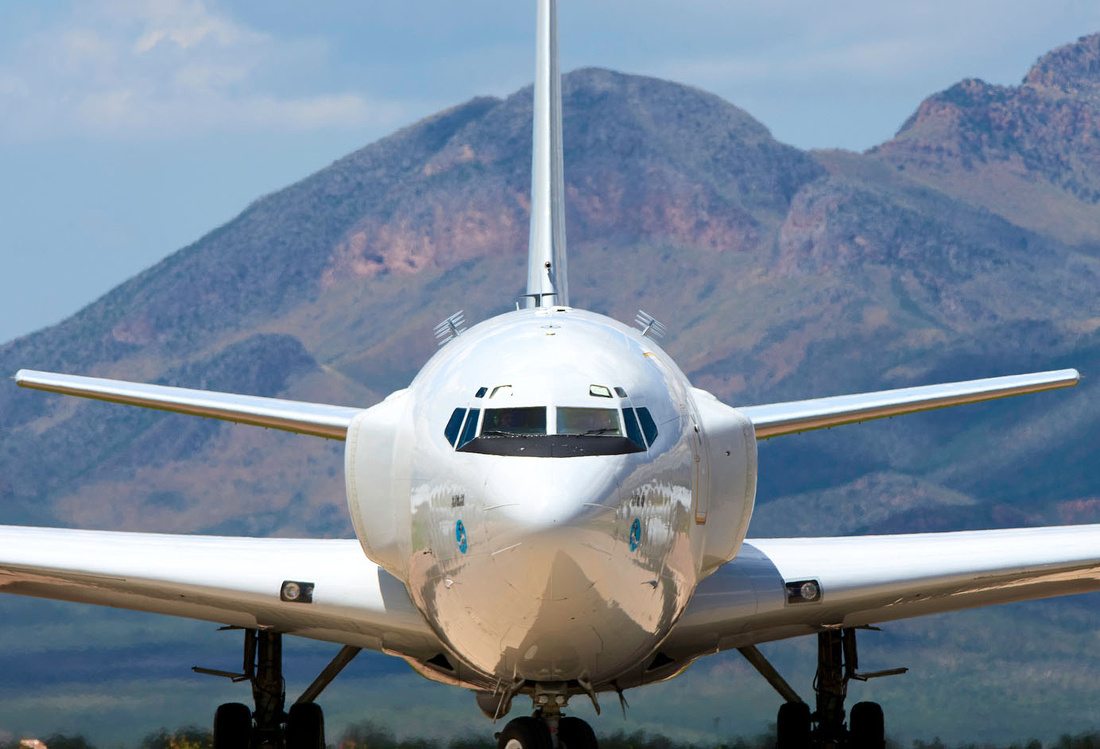 This Chinook on Fort Hood, Texas, is seen head-on, but with a couple of differences: I am very close to it, so the wide-angle lens is emphasizing the bulbous nose; I am low, looking up to it; there are soldiers working on it. Each of those factors changes the effect. 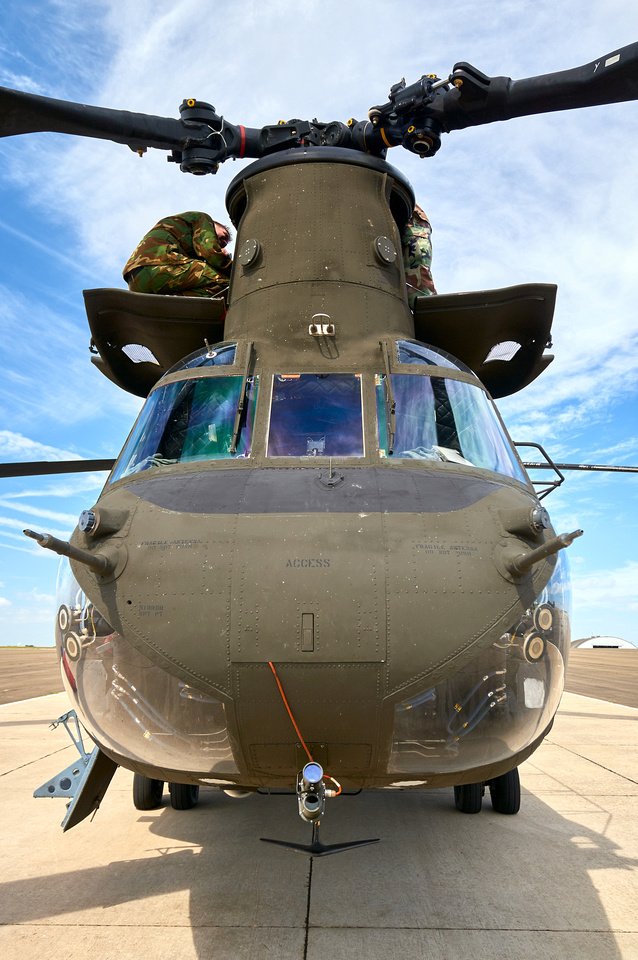 The overall change is one of softness. Yes, the aircraft is definitely the center (no pun intended) of attention, but this is more human. The aircraft is approachable yet heroic, capable yet it needs our involvement. Strong, but a team player.

This Lockheed L-1011 is owned by Orbital Sciences, which uses it to launch payloads into space. The importance of the aircraft is communicated by including the expanse of the ramp at Mojave Air & Space Port. The subject is still obviously the subject, but instead of it dominating us, the viewer, it is dominating its space. 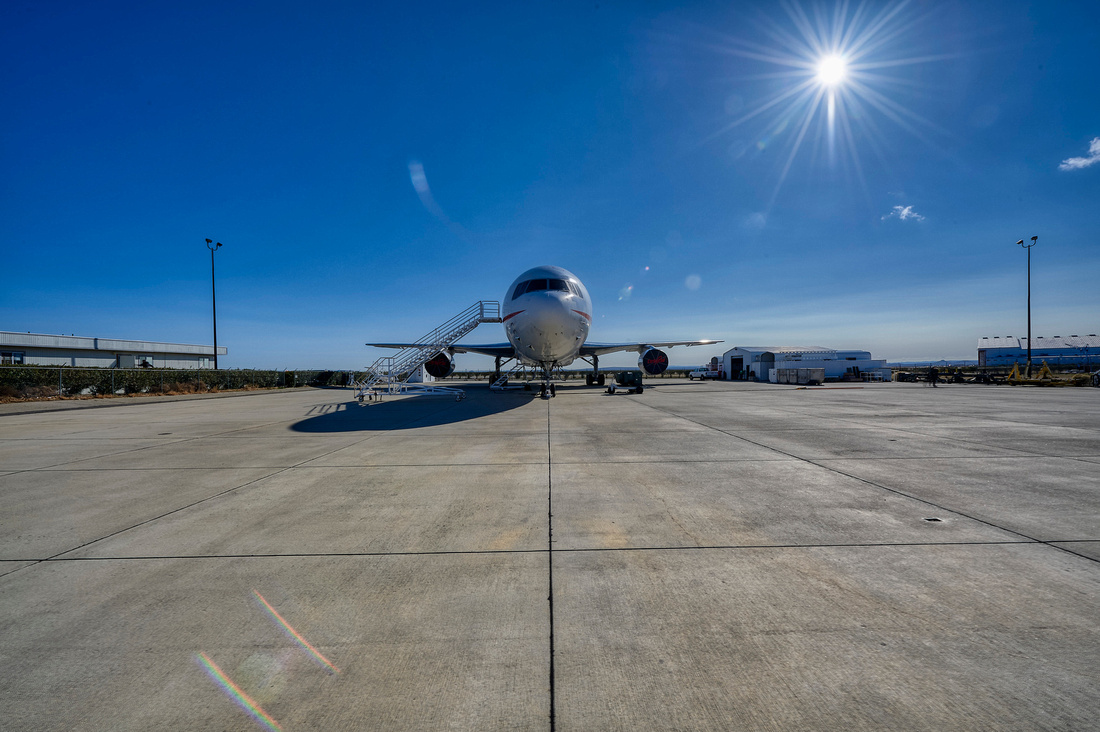 Another image from Fort Hood. This head-on shot of one Bradley Fighting Vehicle is affected by it being amongst its brothers. The camera is low which, by diminishing the power of the viewer is often used to imply the power or goodness of the subject, but by being low in the midst of a bunch of Bradleys, it works mostly not to extol the virtue of the subject, but to subjugate the viewer. 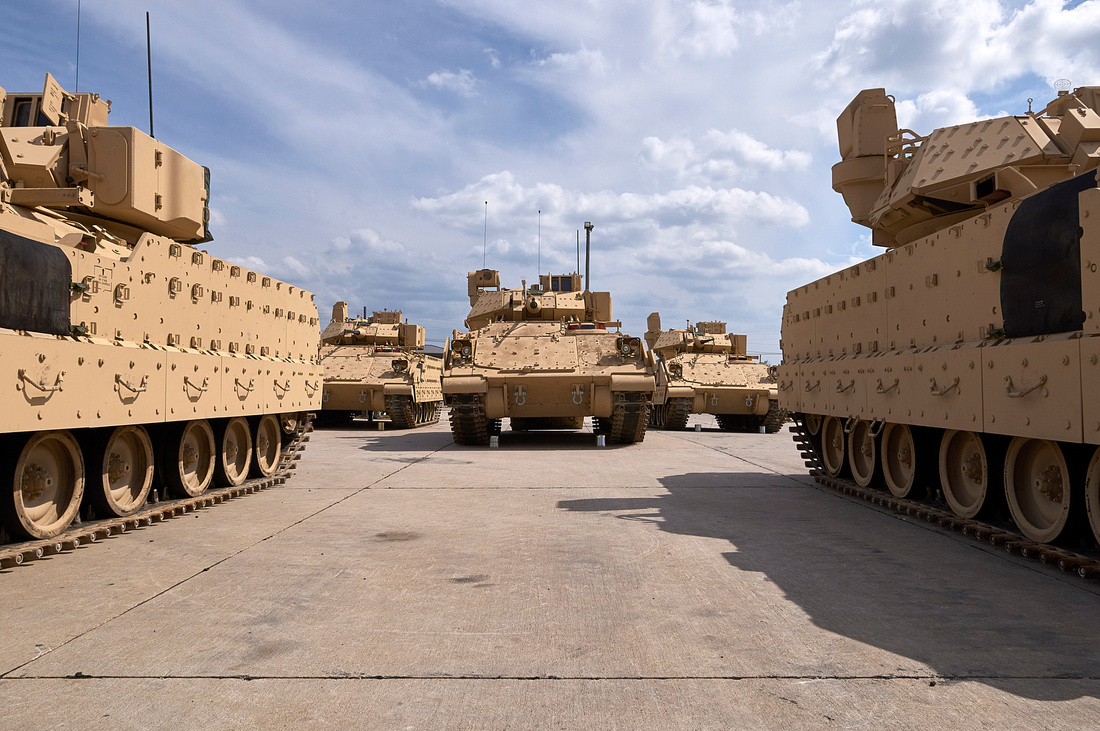 If the point of view wasn't directly in front of the one, if we could see a path between them, we might feel we could escape, slip through a gap. But being in line, in that one vehicle's sights, we feel trapped!

One more vehicle and then I'll show some other subjects.

It might not be obvious at first glance, but this is an A-10 Thunderbolt II. Or, at least, it is some of an A-10. We have fuselage, engines, horizontal and vertical stabilizers. Missing is, most obviously, the wings, but also the big gun. (The gun is so big you can see the nose gear is offset to the starboard to accommodate its barrels.) The wings are elsewhere being reconditioned, modified, strengthened, in a service life extension program (thus the "SLEP" in the sign). I find there is something both noble and humbling about this image — the Warthog has served well, and is having its life extended so it can continue to do so. It's basically a formal portrait of a patient on the operating table, waiting for a new organ to be installed. Or something like that. 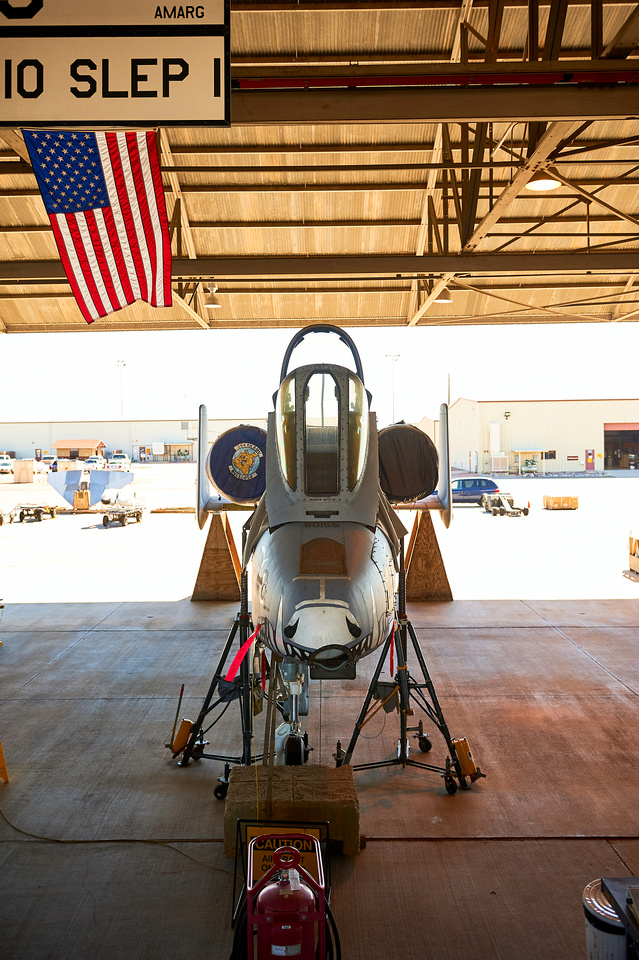 Centering people in the frame can have any of the above effects: confrontational, honest, honored, aggressive, even playful. A person, with their posture and expression, can add emphasis to, or detract from, your message, so you need to watch those human actions carefully.

Of course, a big smile might be just the thing. Crossed arms can show defiance, but his smile counters that and, to me, suggests pride. 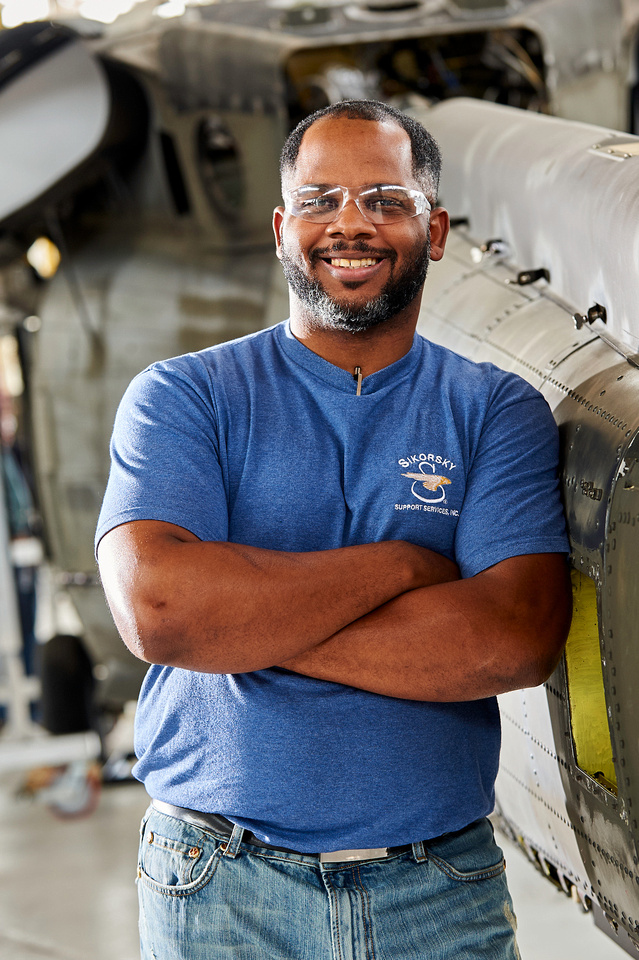 A big smile with open arms is more, "welcome to Melbourne!" 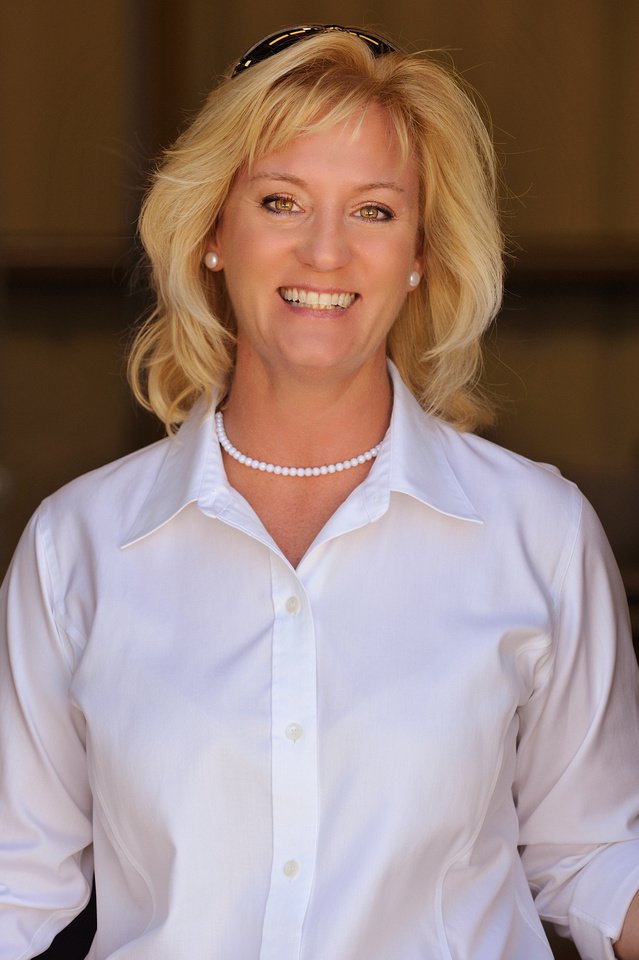 Maybe just a wry grin, surrounded by your work? 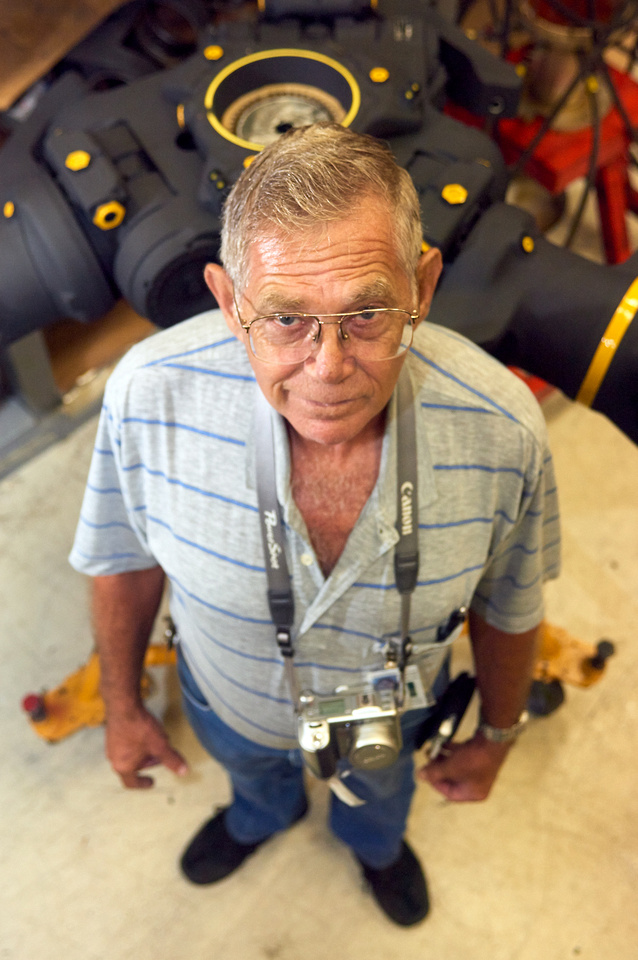 Or skip the grin, and show you mean business. 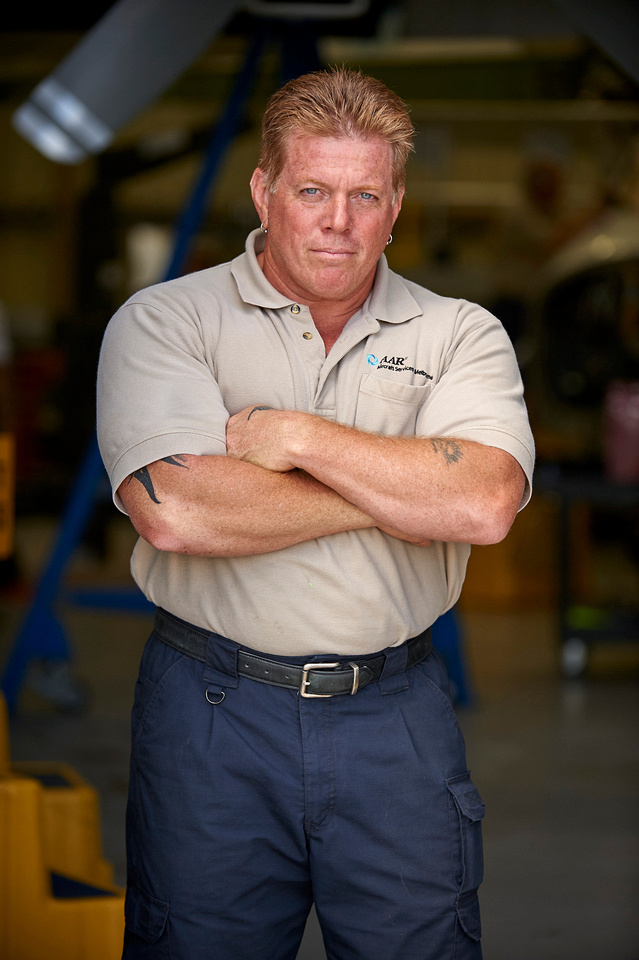 In each of these images, we leave no confusion about what is important — it's the "who" in the picture — and they are looking at you!

Back to non-people images, here is a set of propellers in a memorial at Airbase Arizona, part of the Commemorative Air Force. Admittedly, the display is ready-made for centering the subject, and I did just that, but I've shot purposefully and worked a tiny bit of Photoshop on it. 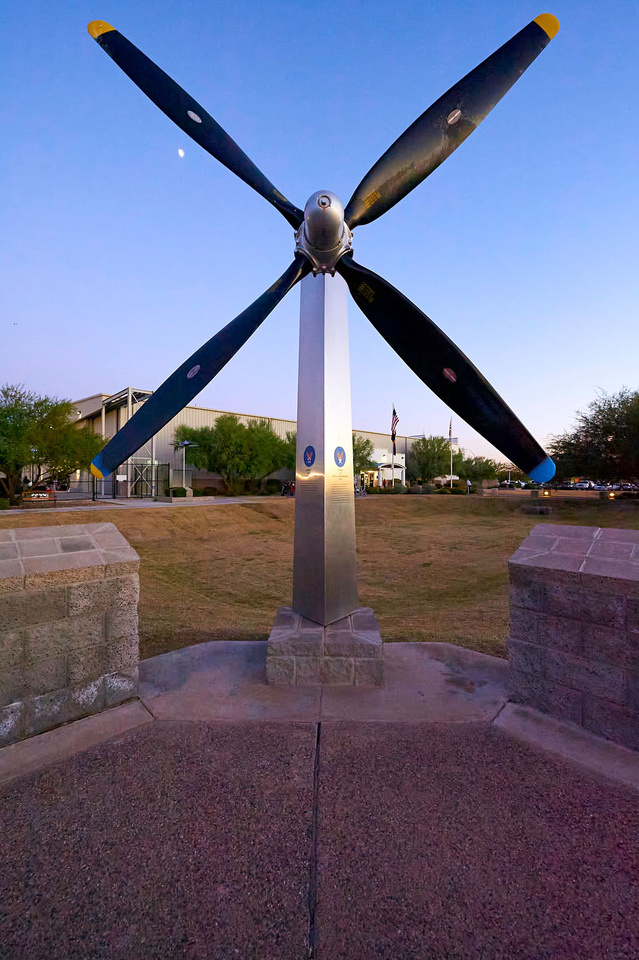 Since I intended my photo to do justice in honoring the B-29 crews, I didn't just hoist my camera to my face and bang off a shot. This is actually the fourth of four frames I made, and with each click of the shutter button I was adjusting my position and framing: off-center just wasn't working; I wasn't quite straight enough; that streak of bright reflection on the left side of the pylon was running through the emblem.

The "little bit of Photoshop" was in service of keeping the attention on the memorial, though brief excursions to the American flag, or the building, or the masonry/concrete in the foreground, were all fine with me. But there was a drainage pipe on the berm and a small piece of paper, or something, littering the grass. Those were distracting so I excised them. No harm, no foul — this image isn't evidence in a trial.

If you've never been on the flight deck of a C-5 Galaxy, just know two things about it: it is a long ways off the ground, and you have to climb a long ladder to get there. Here's proof of the latter/ladder: 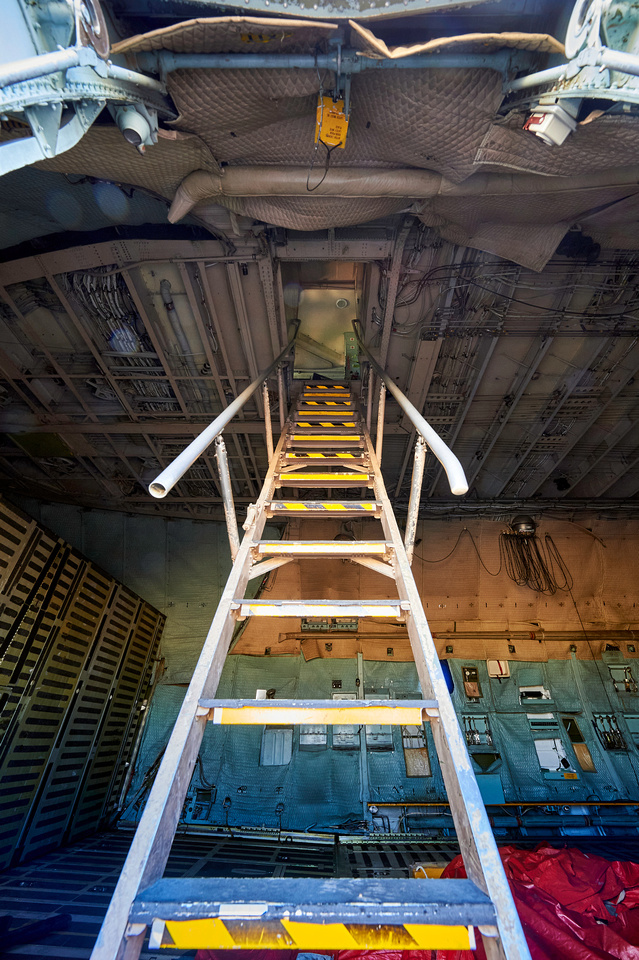 I don't recall my crouching to make this image, meaning there is another four feet, or so, of ladder out of frame at the bottom. You climb that just to get to this. As for the effect of centering the ladder in the frame, it invites you to climb. Off center, especially if the rails didn't converge, visually, as evenly as they do, the viewer is given the choice — climb, or maybe look over there (wherever there is). As shown, the climb is imperative. It is demanded. (If you're interested in the reward for hauling yourself up this ladder, the interior of the flight deck appears in my article about "bones.")

This final image is looking down the runway at a small, un-towered, airport near Phoenix, Arizona. Even more than the ladder, it demonstrates how the subject doesn't actually have to be upright and staring at the viewer. Even without the painted arrow, there is a strong implication of direction, of motion, of somewhere to go. 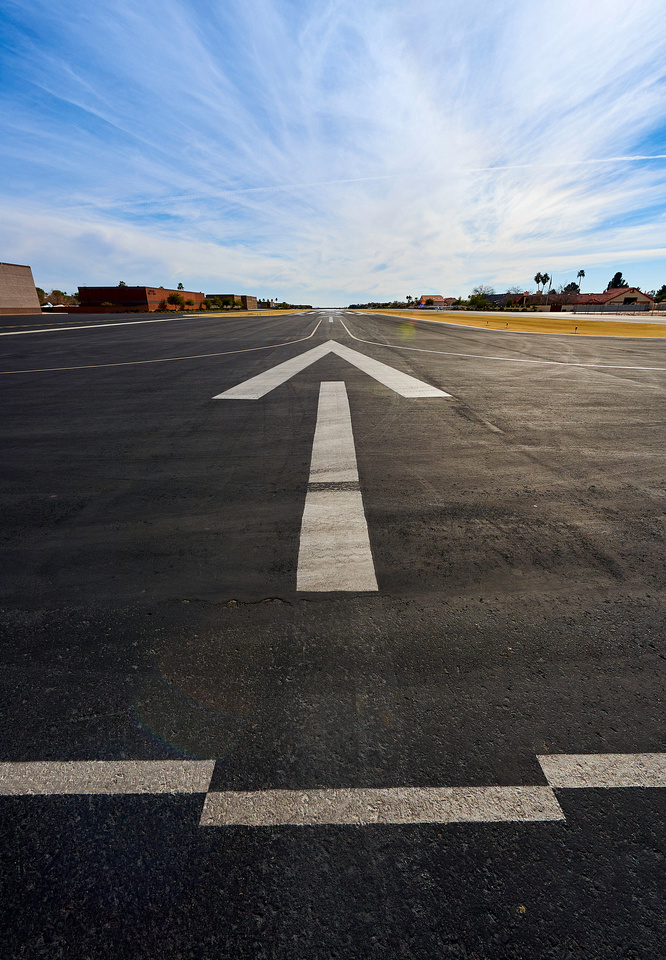 And The Point Is…?

Take with a grain of salt a critique of your photography that declares "you should never put the subject in the center." The center is a very important place as it pushes distractions aside, it balances the forces in the image, and demands attention. Remember, too, that it also puts attention on the viewer. That can be a good thing, so make sure you demand that attention with purpose.