It is true that photos are made, not just taken. Pressing the shutter button is the beginning, and a very important beginning, what with the multitude of settings to set and a composition to compose and picking the right time to press that button, but those merely comprise step one. Step two and step three and, perhaps, step 119 come later, and it's those subsequent steps that convert the collection of photons you captured when you pressed the shutter button into a photograph instead of a snapshot.*

What to Start With

Let's look at turning a good snapshot into a good photograph using a single image capture. (By the way, later I throw reality to the wolves — so, stick around for that!) 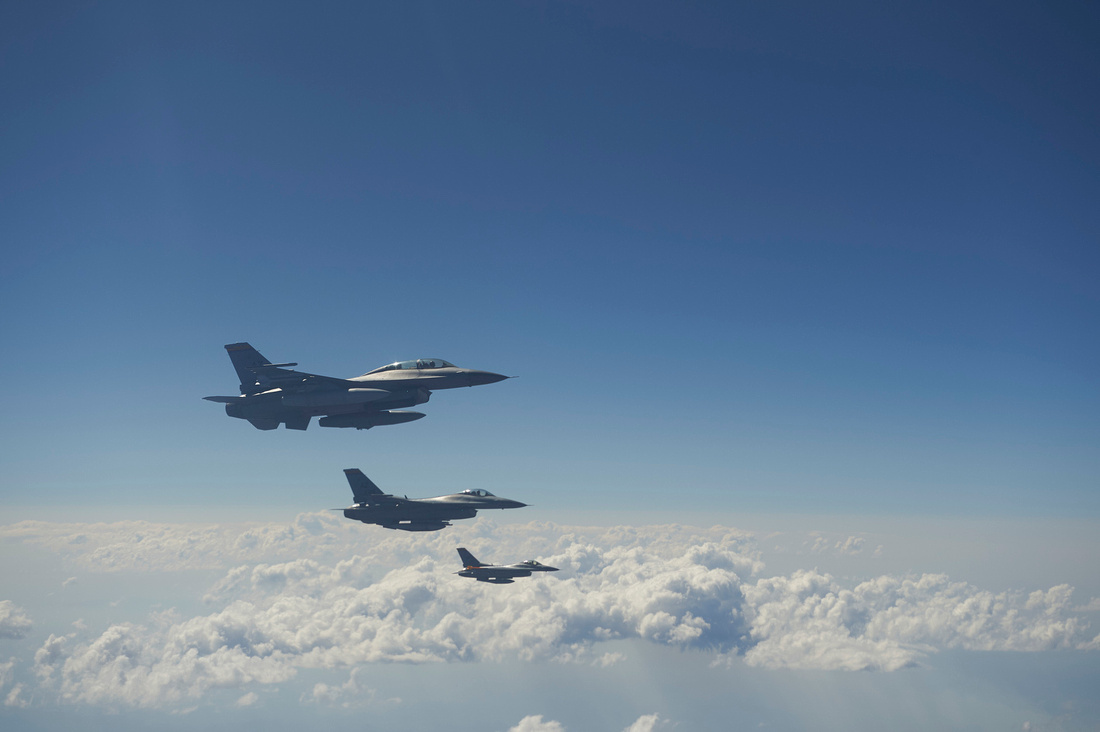 This is nice, right? A trio of F-16s from the Air National Guard in Tucson, Arizona, on a training flight over New Mexico. The settings on the camera have captured detail from the brightest to the darkest parts of the scene and the focus is good from near to far. Compositionally, I left twice as much sky as ground, giving the aircraft room to fly, visually, and I've chosen a moment that has the three aircraft attractively aligned. I'd say the first step was well taken.

Rather than describe every step in turning the snapshot into a photograph, here are pairs of images that shows the basic changes:

There's the original, again, next to the result when I instructed the software I was using to automatically make a good photo. The result is less murky, that's for sure, but a bit overdone in my mind — too much contrast, too much color (saturation).

With version 1a, I returned to the original and began moving the post-processing controls around manually. More contrast, yes, plus sharpening (a must for the any digital photo) without overdoing that. I also used a tool to select what I hoped was a neutral-colored feature, something naturally gray, to shift the color of the image to be accurate.

Version 1b has a bit more contrast in the aircraft, making their shaded undersides dark. (I know it might be a little difficult to see the difference just glancing back and forth, but it's there.)

Version 1c actually lightens those undersides just a bit, countering the darkness that the additional contrast imbued them with. It's a subtle tweak, but I wanted to make sure we can see the details (which, again, I know are hard to see at this small size).

How did I like the result in 1c? Not well enough to let that be my final version. Frankly, what I had hoped to be a neutralizing of the color — even if technically accurate — looks too warm, too yellow, to me. So I actually went back to the original and went through some of the same steps but chose a different element on the nearest Viper as the neutral one, and I like the result, 2a, much better.

Why not just show the original and 2a, the final final? That would have less clearly explained that there can be a lot of work put into achieving a final final, including starting over. Sometimes the changes, step-to-step, are dramatic, sometimes they are subtle but meaningful. Notice above, actually, how 2a appears similar to the automated version. Why not just push AUTO and move on?

As I mentioned, the auto version was too contrasty and, on the undersides, too dark. Here's a close-up of the nearest F-16 to compare those results. It might be all those fluffy white clouds in the distance (even though we are actually over dull, dry, dim, desert), but I expect more light to be thrown up under the aircraft, and a random viewer of the image might feel the same. So, I tried to not let that viewer be disappointed.

This is a potentially versatile image, with plenty of room for copy to splash across the sky. Or, depending on the space available, cropping out some of the image is perfectly acceptable, too. Like:

I've reduced the amount of sky while retaining plenty of it in front of the aircraft. This wide offering would look right at home across a three-page spread in a brochure, or even on the big screen in SuperAeroVision™ (I just made that up, but I'll claim trademark on it 'cuz it's catchy). 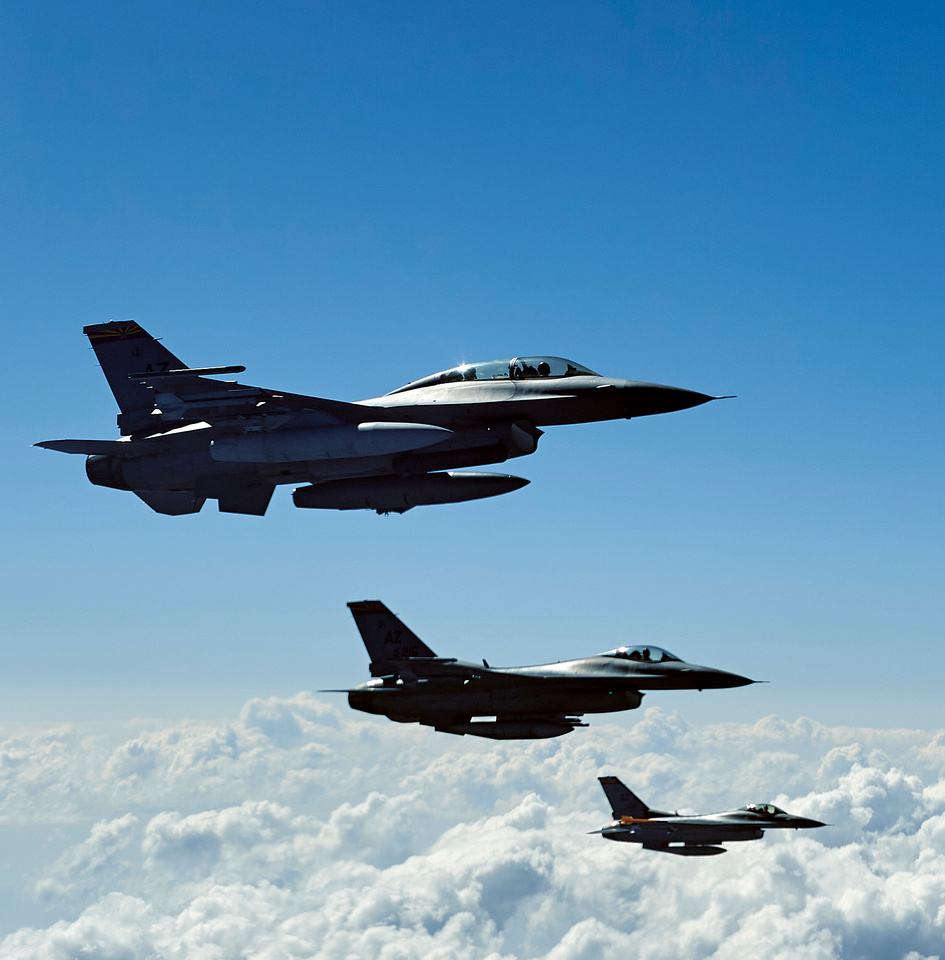 Or square it up, à la Instagram, which fills up nicely with that stair-step composition.

Or just keep on cropping until you have two gals and a plane.

Obviously this article isn't meant as an extensive how-to on preparing photography, but is only the briefest of overviews to bring home the point that pressing the shutter is just the start. Plus, once you believe you've arrived at a "final" image, just know that it doesn't have to be final. And not just by my preference for 2a over 1c.

For instance, here's some fun I had with that SuperAeroVision™ cropping:

I can make the aircraft speedy (which, for me, is meh but doable), or…

Give it sunset colors, or…

Turn day into a brightly moonlit night, or…

Push the colors to their extreme, or…

Throw the actual colors out the window, or…

So many choices. But why do anything except the natural and attractive 2a? Because sometimes you have to grab eyeballs by the, well, you gotta grab 'em. Cropping, tweaking colors, and plenty more approaches are available to accomplish just that.

I come to bury Caesar. I mean, the point is: while it's possible to fix a poorly captured image, it is much better, and you have far broader options in post-processing (what all of the above is called), when you start with a well-shot, well-composed, well-timed beginning. Then, take care, evaluate what you start with and where you end up, and don't be afraid to start again.

* Unspoken, by me above, is an underlying technicality — when I press the shutter button and collect photons, I have instructed my camera to do nothing more than collect photons. Meaning, "Dear camera, do not be messing with the image. Sure, maybe the colors are wonky because the lighting is from a low-pressure sodium lamp, or the contrast is low, or high, or any number of other imperfections in the scene — just give it to me straight and I'll figure out what to do with it later."

In other words, my camera stores the data that forms the image in a "raw" format. That's why the original, way at the top, is a bit flat, contrast-wise. It's not how I remember the scene, and it's certainly not as eye-attracting as where it ended up, but by capturing the scene the way it did, I had the most information — dynamic range, color densities, and more — with which to achieve an image that looks more like what I recall, and is certainly more interesting to look at.

If your camera is set to save something besides a raw format, it is making many of the kinds of decisions I made later, about color and contrast and brightness and sharpness, in the instant after it captures the photons. That can often result in really nice photos, right out of the camera. It really can. And it's a lot easier than what I go through. But it also means those decisions, those results, are baked into the image, and now further changes are made on top of those original changes. And that means you are somewhat, or greatly, damaging the integrity of the image. Plus, since almost every camera that is not set to save raw image files is saving JPEG image files, they are being baked in with some level of damage caused by the JPEG compression scheme. I shan't go into that here, but you can read all about why JPEG sucks here.

Thanks to Arizona Air National Guard 162nd Wing and 161st Air Refueling Wing for letting me see and show their aircraft in action.