In my article Looking Up, the topic was ground-to-air photography and the location was Las Vegas; the aircraft was a Kaman K-MAX operated by ROTAK Helicopter Services. I recently traveled to Idaho for the same client (ROTAK), where the general mission was the same — move stuff by picking it up from one place and putting it down in a different place — but the stuff was no longer large exhaust fans carried from parking lot to rooftop, but felled trees, from where they were bundled to where they'd be trucked out.

The difference in location and mission particulars made for a few differences in the photography, so I figured I'd revisit the general topic on how to make good use of both what is available and what is in the way.

Aircraft configured to carry things on a line present a photographic challenge: how to show the aircraft and the load when their combined dimensions are two-hundred-and-fifty feet tall, but only forty* wide. The compositional choices revolve around how much, or how little, to show in a single image. Those choices might be restricted by the environment or safety considerations, so I'll share a usable, if suboptimal, approach right up front. 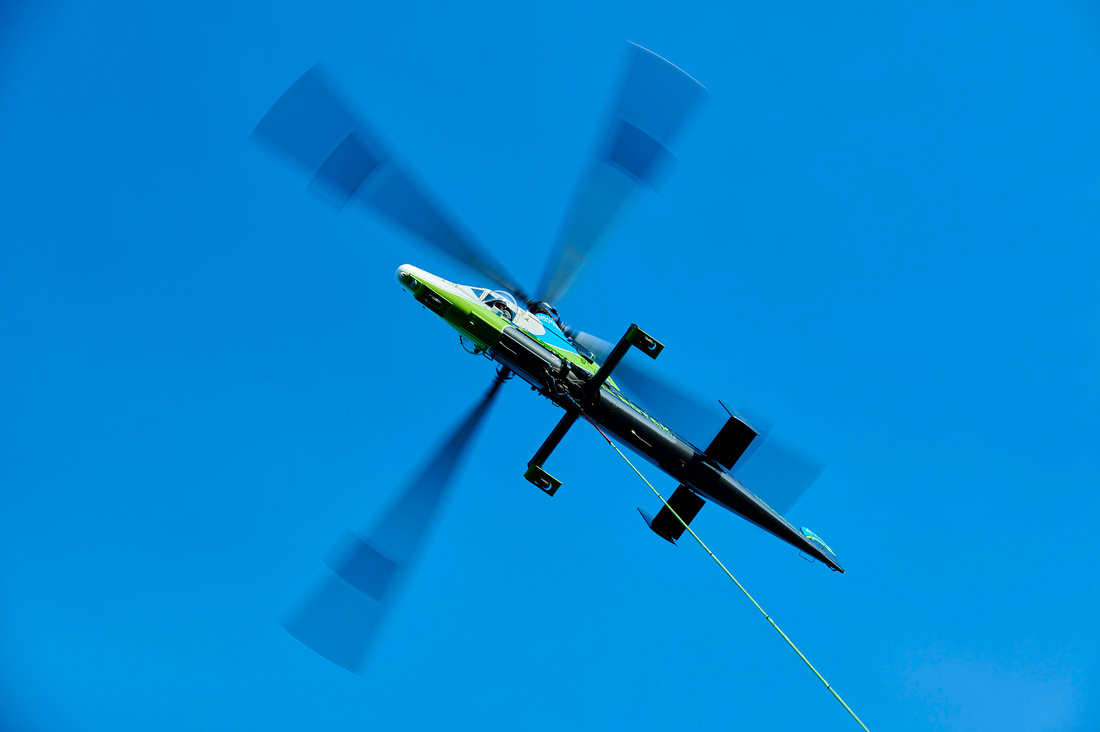 This approach has merit, composed with the energy of the aircraft angling across the frame, and a taut line signaling the viewer that there's something at the other end. Then again, while that something might be hewn tree trunks, it could be a crash-landed airplane or a worker with a tool belt around their waist and a breeze in their hair. The viewer can't tell, so this doesn't tell much of a story.

Indeed, it was safety considerations that prevented me from being nearer the airborne load and, thus, looking up at both the load and the aircraft in the same frame — the tree trunks shed branches and bark, they flop around like a loosely-tied bundle of mismatched chopsticks, and you never know when a major chunk might break free, or a choker cable break. A two-thousand-pound hunk of the forest falling on me would definitely trigger a call to my insurance company, at least to replace a camera, and perhaps to replace a husband.

If we want to see the aircraft and the trees, we need to rearrange things.

Getting Away From It All

To see it all, aircraft and load, you must either move farther away or equip your camera with a wider-angle lens. Or both, as needed. 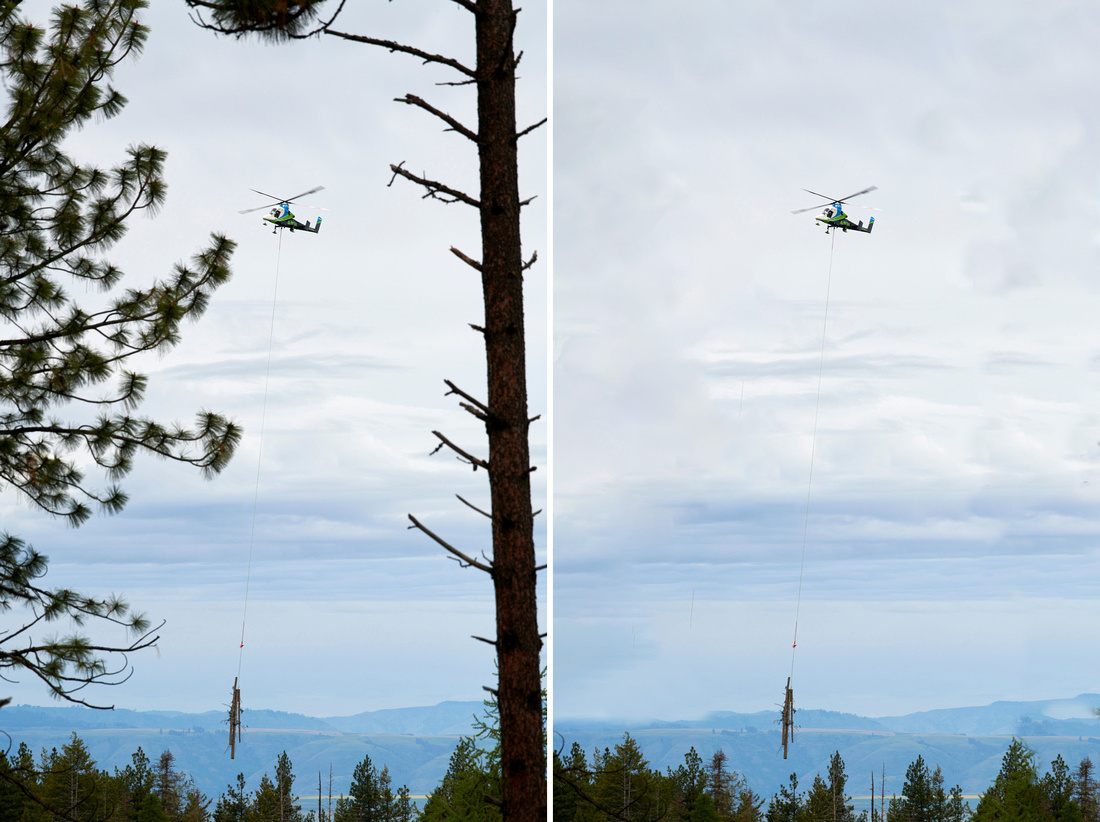 In this case I drove away from the area where the aircraft was depositing its loads, an area called the "landing," to catch the action using a long (narrow-angle) lens. Those intervening trees posed the challenge of photographing the aircraft as it played hide-and-seek through them, but they also lent a useful sense of context. On the left, above, notice how confining the environment feels — representative of the standing trees out of which the pilot must pluck each load — compared to my (for illustrative purposes only) sloppily prepared version of the same photo, sans nearby trees, on the right.

The client also needs horizontal, landscape-oriented, images, so from this distant vantage point I zoomed out a bit to keep aircraft-and-load within the smaller vertical dimension. 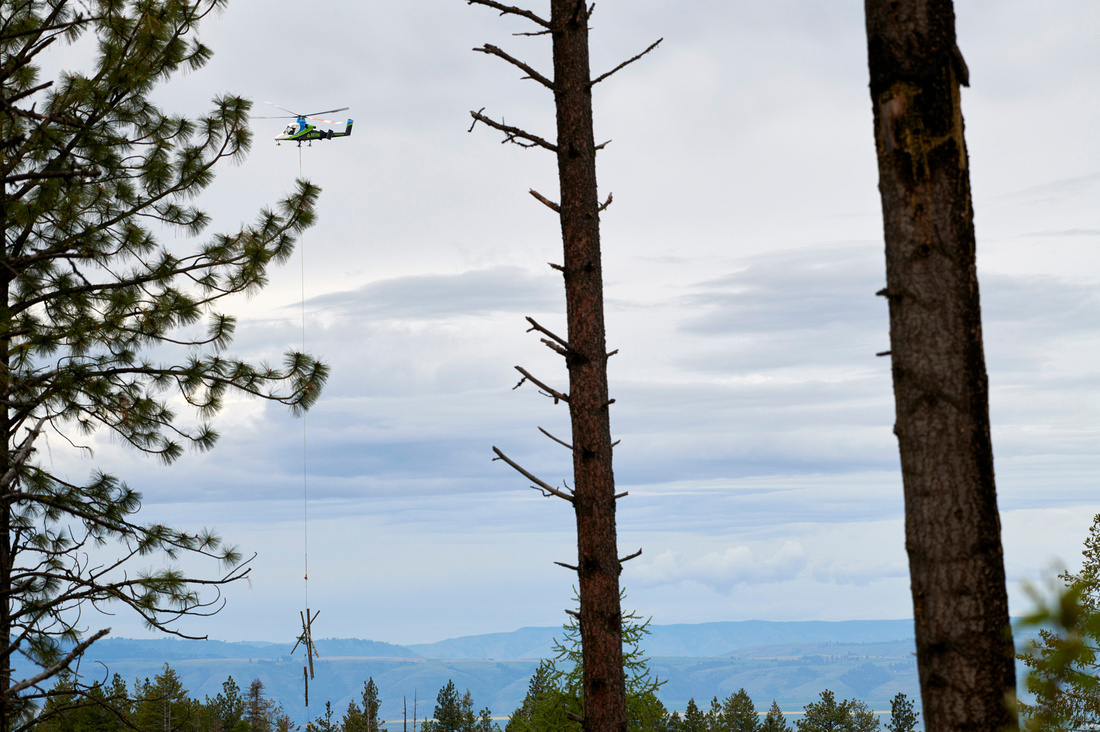 Notice, though, how small the aircraft is in these shots. To see it all means to see it small. (I just totally made up that rhyme!) Fortunately, the forest that separates me from the aircraft can be used to suggest the operations without showing the aircraft and its load in the same frame, which allowed me to switch to an even longer, zoomier, lens. 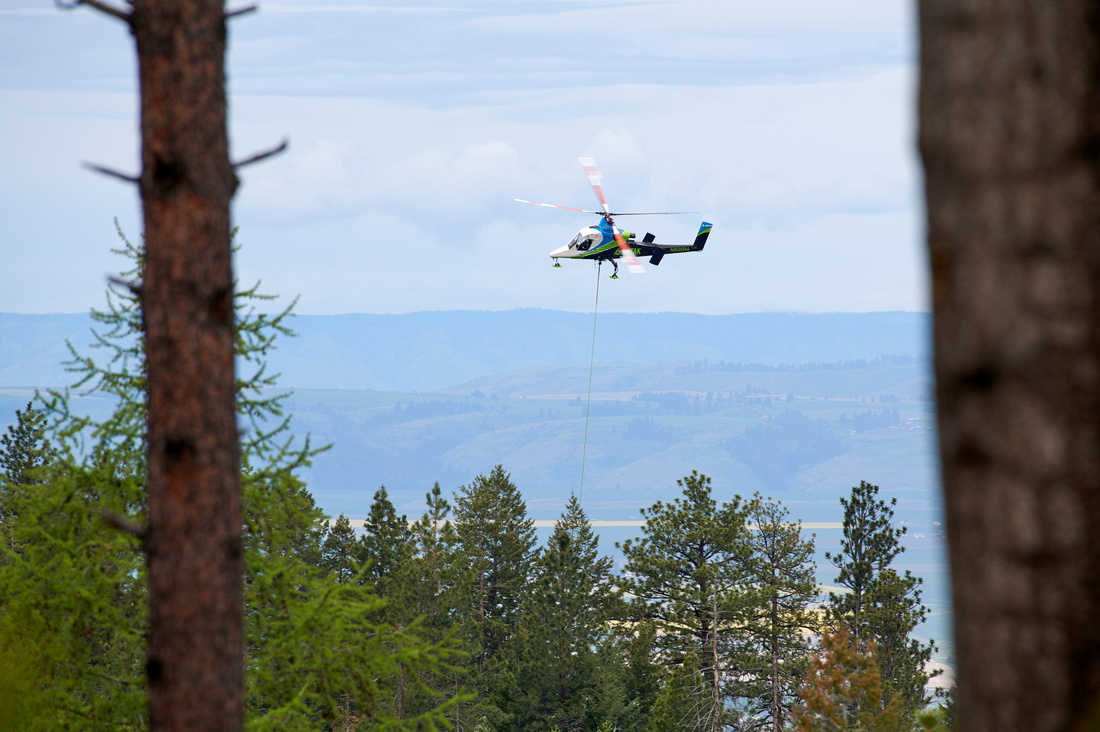 The aircraft still doesn't fill the frame, but we see it two-and-a-half times larger than in the previous shot.

That was the longer-distance, narrow-angle lens, approach; here's the wider-angle lens one.

Being close to the action means more opportunities to adjust the composition, using the other objects and people. 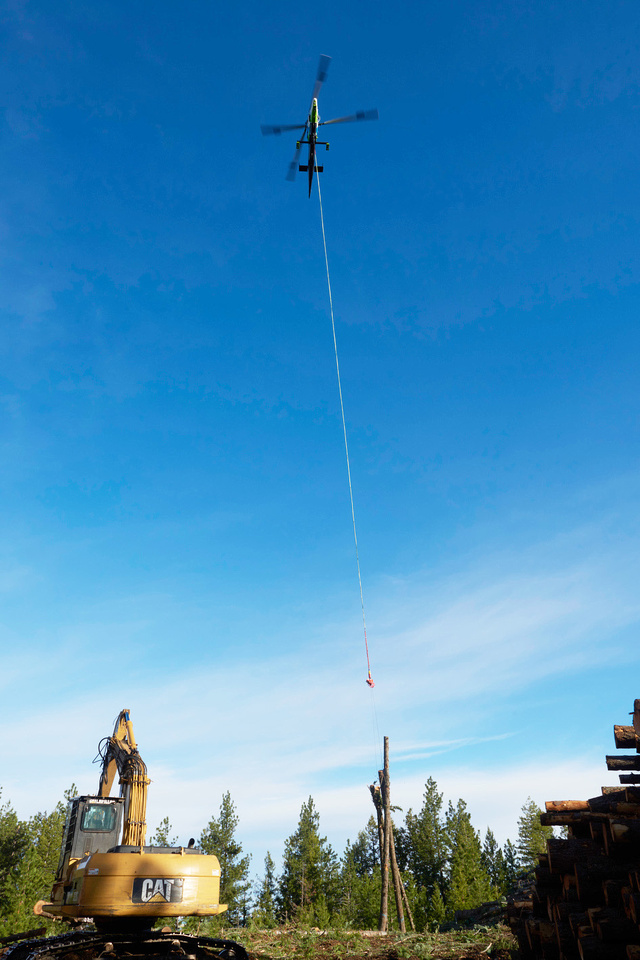 At the landing, my movement was restricted by safety concerns beyond the helicopter and its load. There are large machines twisting and grasping and tracking back and forth. There are 33-foot tree trunks, indelicately placed one atop the other by operators of those machines, which result in massive stacks that are not necessarily stable. Everyone has a job to do, and watching out for a wandering photographer is not one they want added to their list.

The above is one of my first shots at that location, and it certainly shows the action. It is also a bit bland. Yes, there's a machine (the Caterpillar), and yes there's a stack of logs, but I was mostly trying to shoot around them to get a clean view of my intended target. I got ertainly I can do better, right? 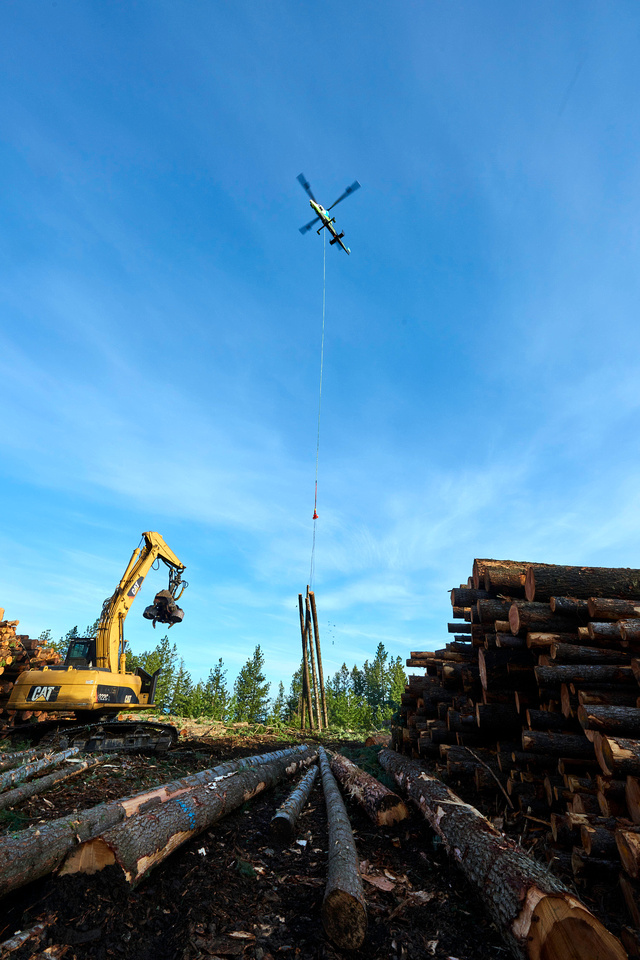 Of course I can! I did that by widening the view of my lens, thus including more of the logs on the right (more context) and taking advantage of the Caterpillar articulating its grabber/stripper thing (more action), and including the logs laid out in front of me to point at the helicopter (more pointy). The aircraft appears smaller, due to the wider lens, but the overall effect is greater. 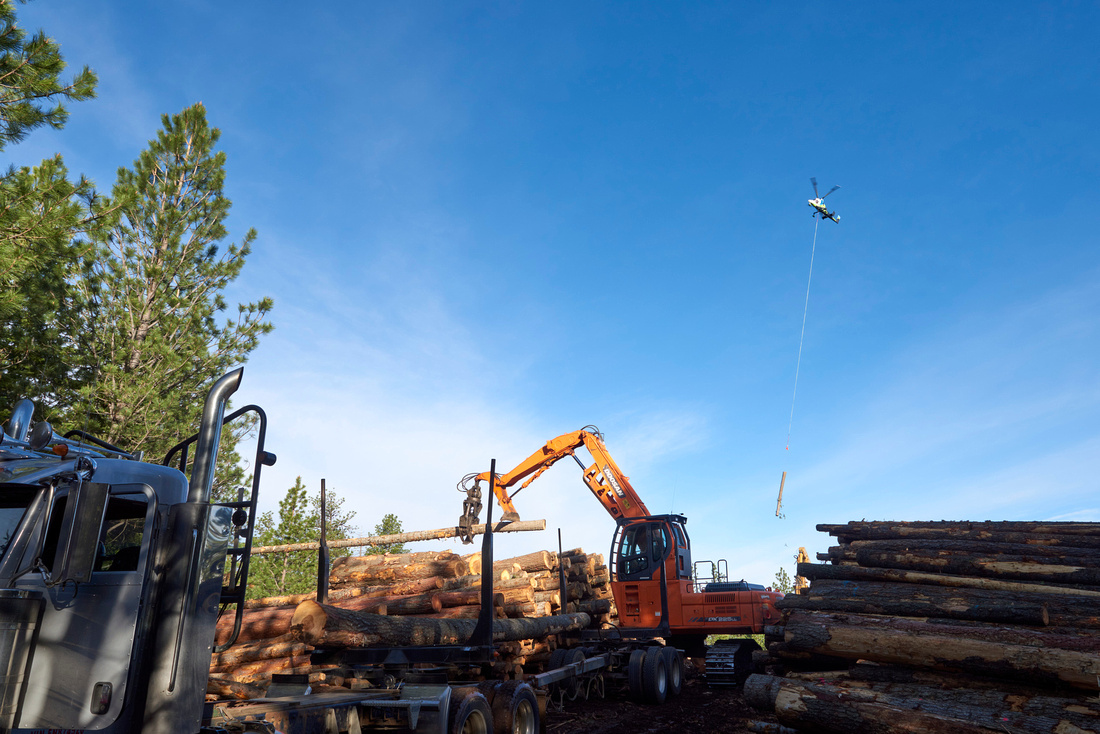 This wide shot includes even more of the foreground, incorporating even more context and action in the scene. 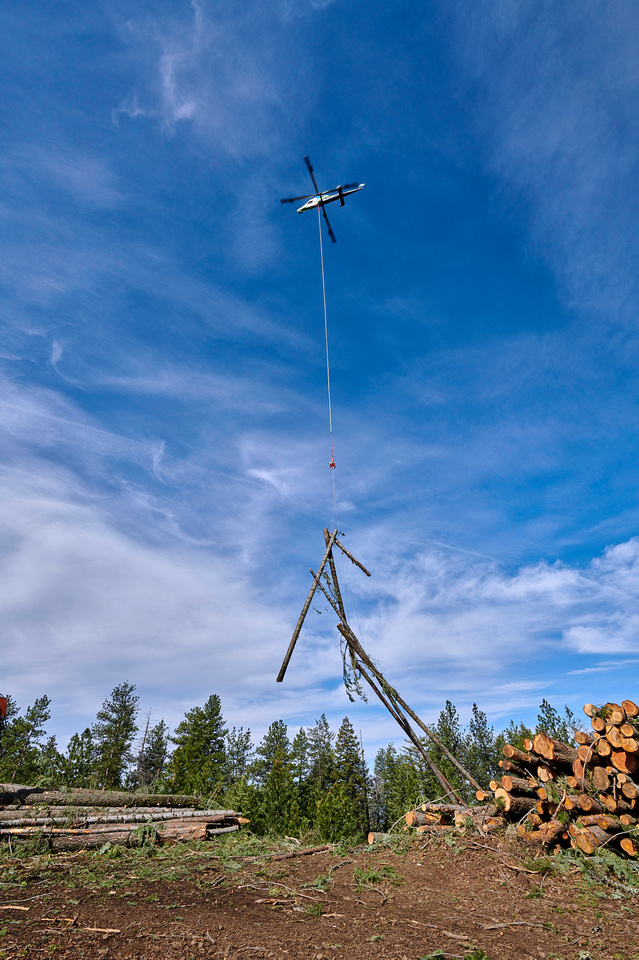 It took a little wrangling (addressing safety issues), but on the second day of flying I was able to move to a different location of the landing, to gain a different view of the action. The lighting is from behind me, rather than from from the right, and we see the aircraft from the side as it drags the timber toward its release. 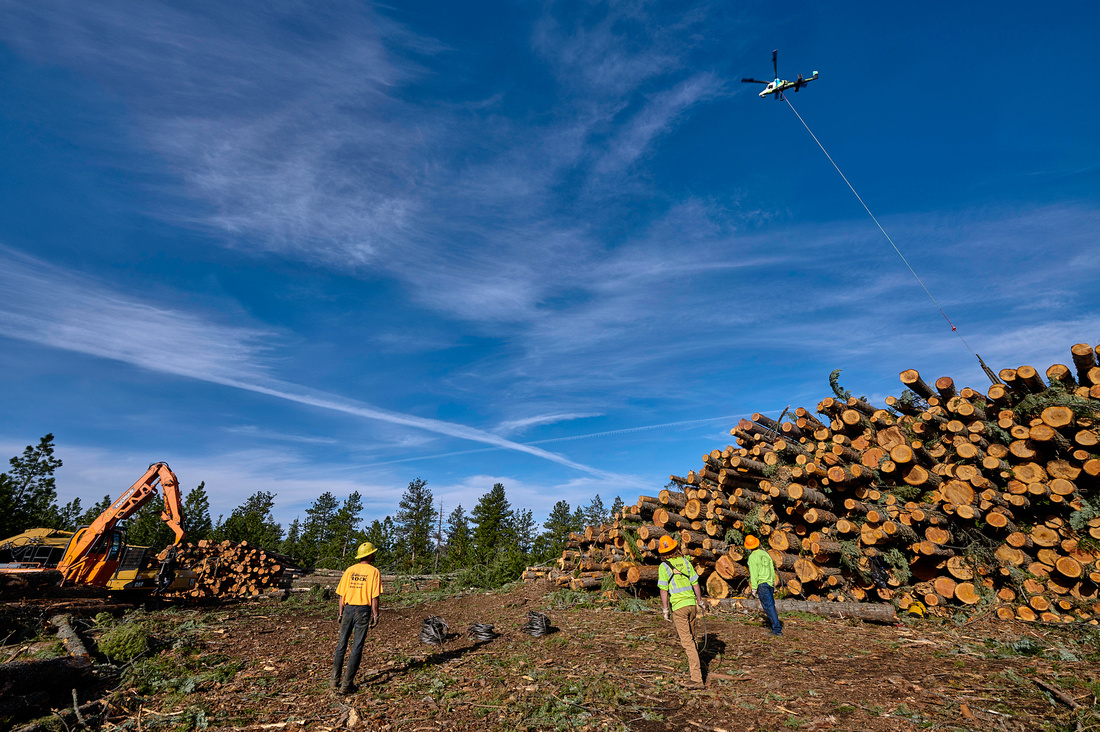 Landscape orientation? Check. We've also regained a view of the ground machines plus a different stack o' logs, and by backing up I've included the choker chasers. These men run out to the logs that have just been released by the aircraft to disconnect and collect the cables, the chokers, that had fastened the logs to the cargo line. 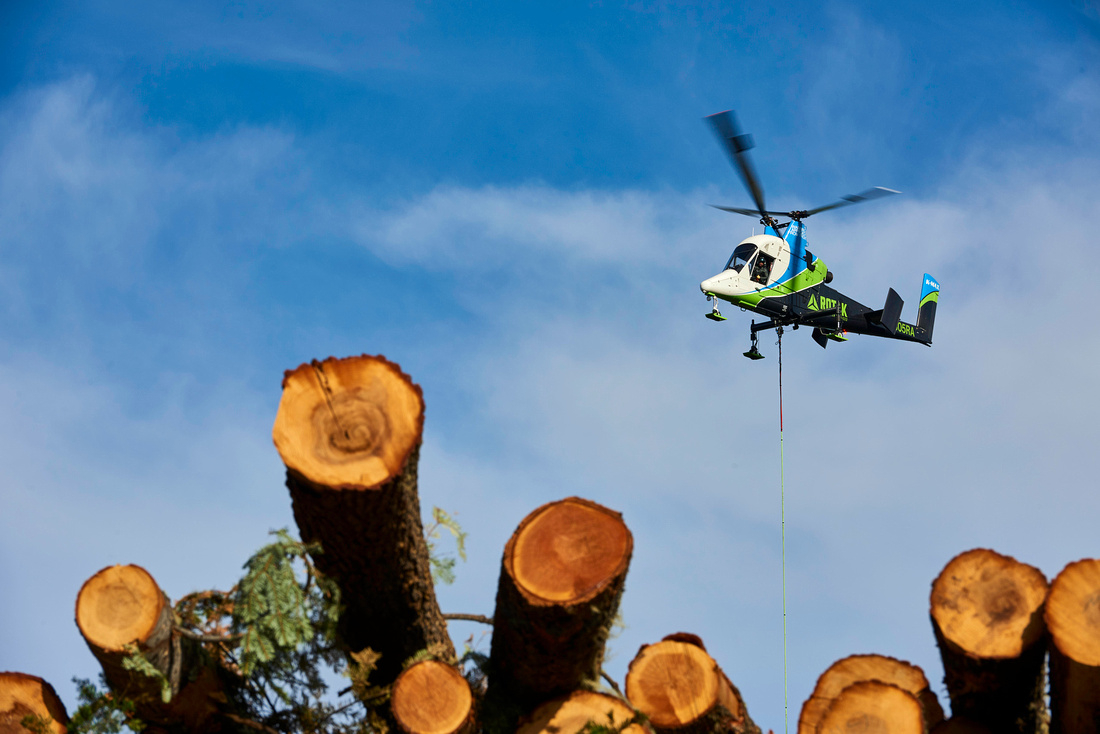 As we saw when I was shooting through the trees, the landscape orientation, especially, reduces the apparent size of the aircraft. Also as before, using a longer lens while including appropriate environmental elements can increase emphasis on the helicopter while still implying the specific activities.

There are plenty (plenty!) more images for ROTAK to choose from, to fit the story they need to tell, the space they need to fill — or fit in — whether it's a calendar, a catalog, an ad, or a social media posting. And because the people are critical to every mission… 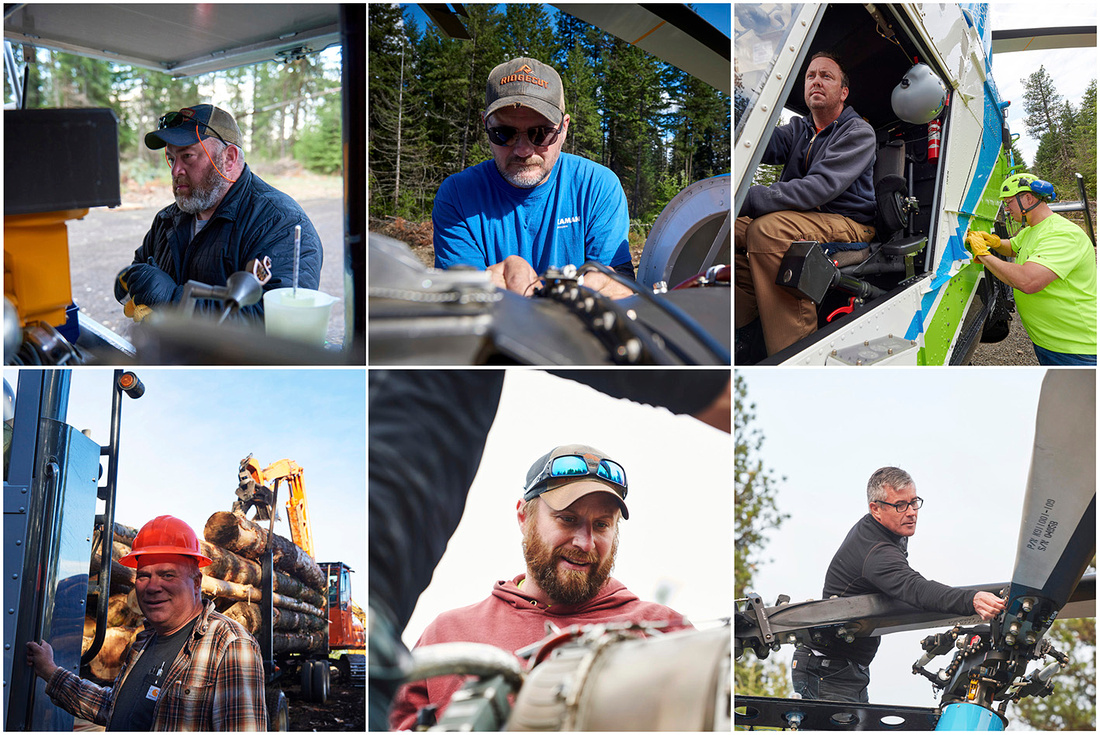 …I always keep an eye out for them doing their thing. Thanks, guys.

Unlike the Las Vegas job, my views of the action were restricted by the presence of logs and machinery, and my movements constrained by the dangers they presented. In Vegas I often had eyes on the aircraft from the parking lot, where it was picking up the fans, all the way to gently lowering those fans into place. In Idaho, well, it was a forest, so there were trees, like, everywhere — standing or in big piles. Thus, the aircraft would often spring into view, dump its load, and speed off again, with little warning that it was coming and little chance to catch it as it left. The pace was also quicker for the helicopter than it was in Vegas, with less time spent picking and dropping, which gave me less time to capture interesting, descriptive, images of the action.

When that's the situation, figure out your most advantageous locations, move as much as you can to include more or less of the environment, vary your lens and exposure settings to provide a range of visual approaches, and work your camera quickly and surely. That last part can't be stressed enough — know your camera; what it can do and how you make it do it! 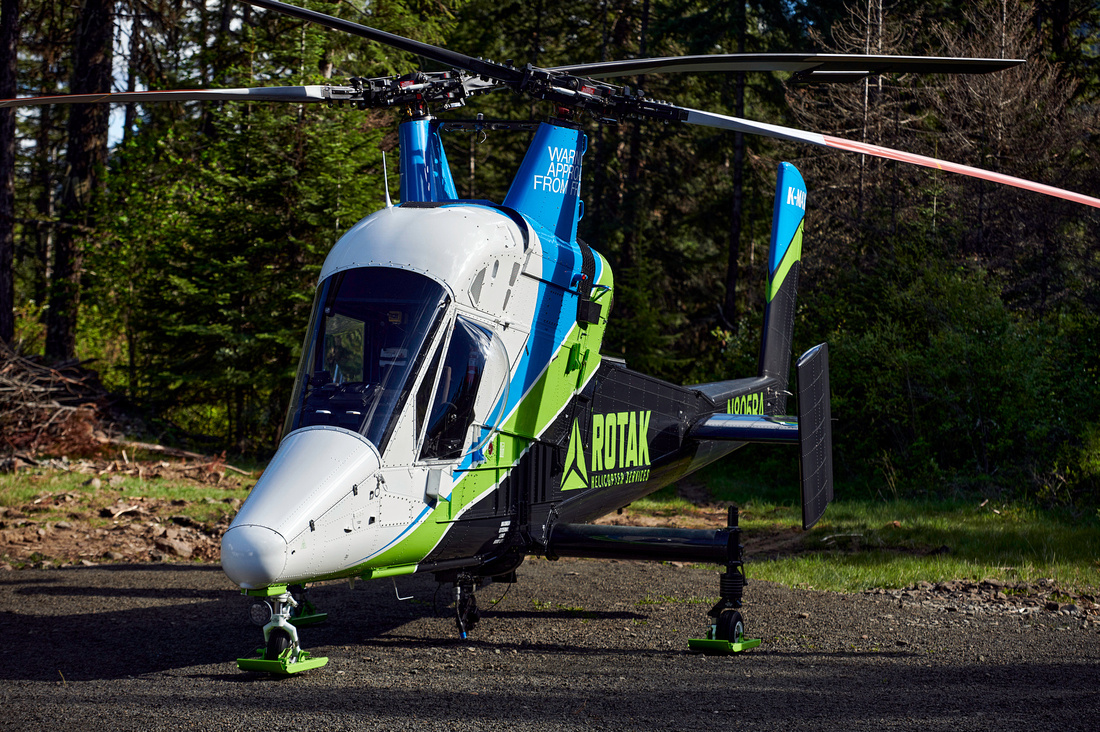 I mentioned, above, "the second day of flying," by which I really mean "the second day of flying while I was there to photograph things." I mentioned this because the first and second days of flying were separated by a day of waiting for a tiny part to arrive. The mechanic had discovered a failed component on flying-day 1, so the aircraft was grounded until the following day when the replacement part arrived and was installed in the early afternoon. It was decided to forego operations that day, after the install, but that didn't mean I couldn't photograph activity, and the aircraft, at their landing zone (not to be confused with the landing, where the logs were dropped off).

I had plenty of room to move about the LZ, so for this photo I positioned myself about 100 feet away from the K-MAX, equipped my camera with a relatively long lens, and climbed into the back of a pickup truck for a higher angle on the aircraft to create this stylish image. A clean aircraft (they keep it that way all the time), beautiful lighting, the long lens doing for the aircraft what it does for portraits of people (not prone to emphasizing the nose), and depth of focus carefully controlled so the subject is crisply rendered but the background foliage is not.

Thanks go, of course, to ROTAK Helicopter Services of Anchorage, for trusting me to capture the action (and more).