Landscape photography is often concerned with placement of the horizon in a composition. Aerospace photography might not seem much akin to landscapes, but horizons are an important compositional element even there, so let's look at some of the "where" and "why" of horizons in aerospace imagery.

(I'll mostly use terms like photo or image, but the same observations apply in videography, though with the addition of motion, including horizons that can move, change their orientation, or appear/disappear.)

What The Horizon Does

In its simplest role, the horizon divides the ground from the sky and, as it does in life, so it does in photography, giving the image an up and down. That distinction seems so obvious we don't really think about it, but how and where the horizon appears in an image affects how we relate to to the subject, and how the subject relates to the world. 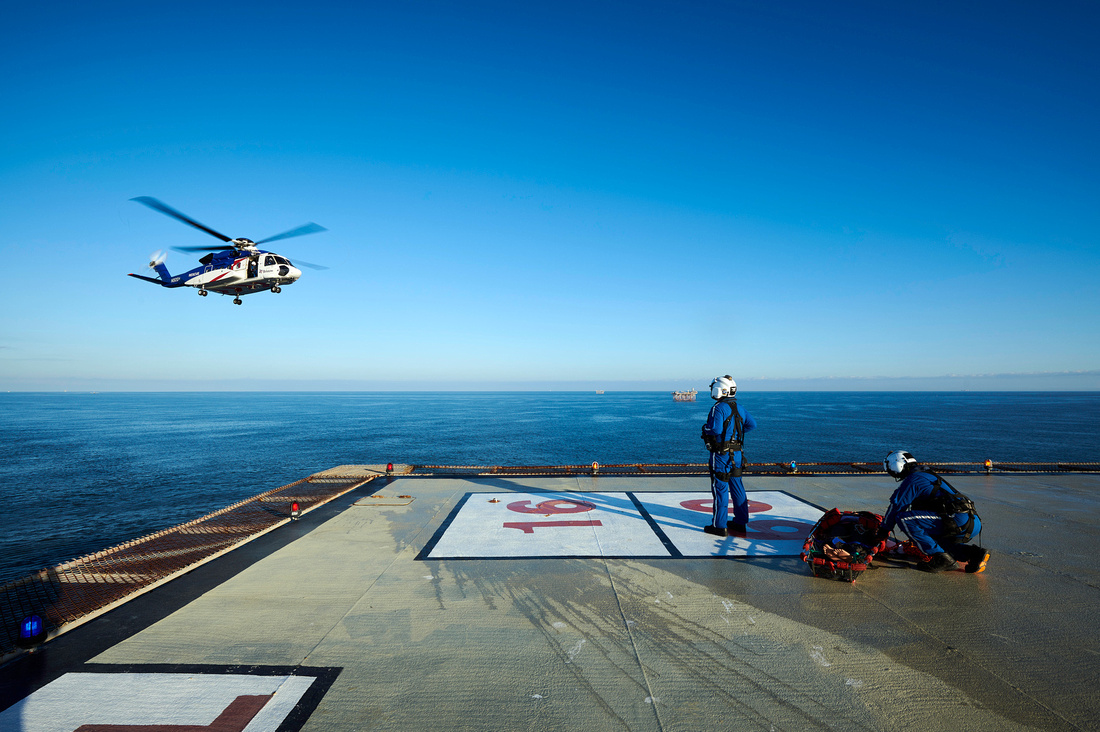 Standing on an offshore platform, I've neatly cut the scene into sea and sky, each of equal importance which, in the world of offshore helicopter operations, seems about right. "What about the rule of thirds?" some of you are yelling at your computer monitor. To which I say, "tough luck, rule of thirds."

Or, actually, the rule of thirds is still at play, just not in the position of the horizon. The S-92 is one-third of the frame down from the top and (roughly) one third in from the left. The crew on the platform are one-third up and one-third from the right. Thus, the two subjects (aircraft and crew) form a diagonal of activity, emphasized by the standing crewmember looking toward the helicopter, and accented by the slanting sunlight, to capture the environment and the activity. In this case, the horizon's role is to set the stage yet stay out of the way. 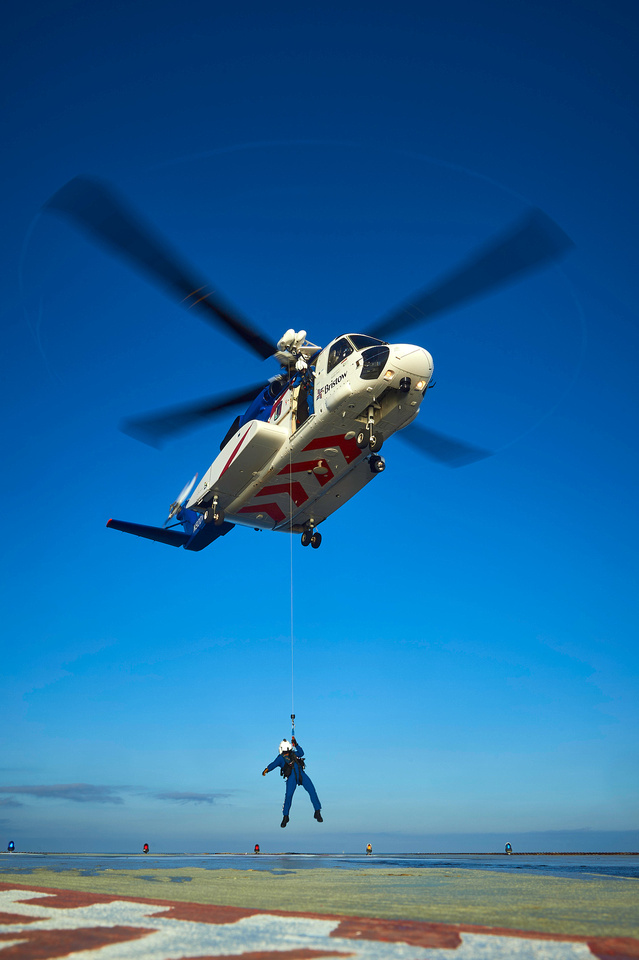 Staying with the offshore platform location, this scene is more about the aircraft and its place in the sky, so I've minimized the foreground — without excising it completely — to create this formal portrait of helicopter, hoisting crewmember, to platform. Three elements, clearly delineated, but shot from a low position to emphasize each appropriately. The horizon is still separating the sky from, well, not obviously the sea, but from the surface, and placed to put the emphasis on sky.

If my camera had been at standing height, I would have needed to make the shot while the crewmember was nearer the aircraft in order to show them against only sky, as the platform would have consumed more of the foreground. The result would have been less dramatic and, thus, less effective.

Got it? I slid the horizon through the middle when that suited the scene, and pushed it quite low in the composition when that was the right thing to do.

What if the Horizon is Missing?

Showing a horizon is, of course, not required. Plenty of great photographs have been created with nary a ground/sky divider in sight. For example: 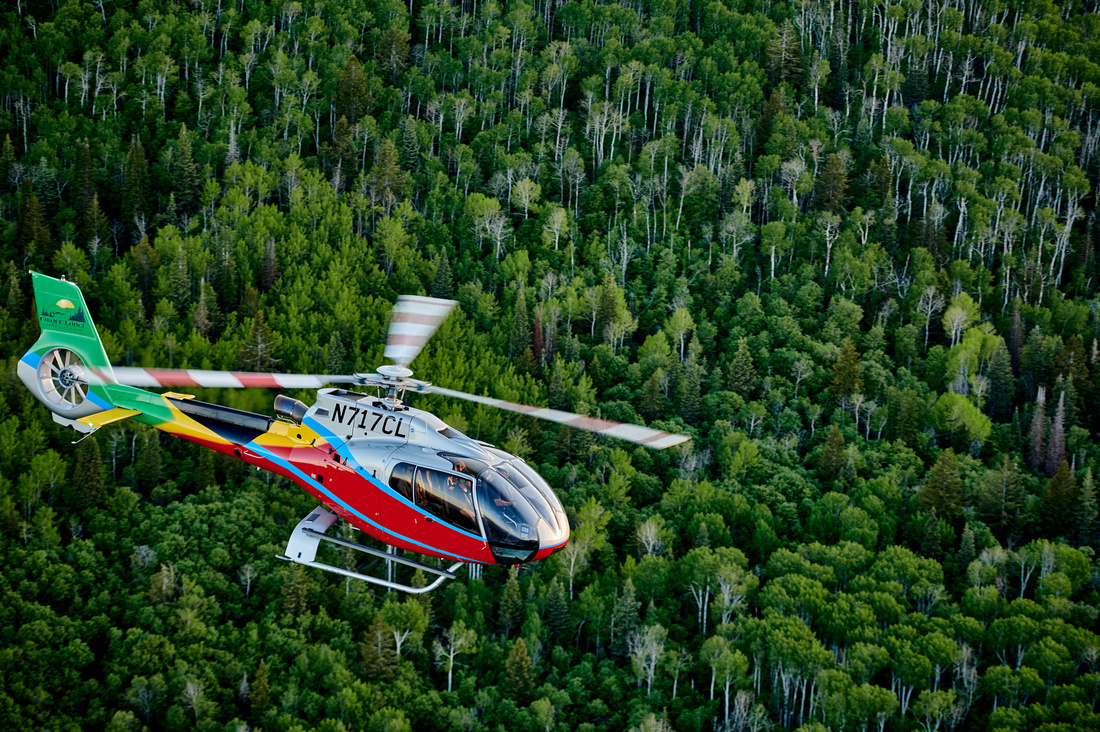 Beautiful, right? The background colors are a mostly muted greens with pale stripes of tree trunks, which let the vibrant and crisp H130 pop off the page. Our reward for having our attention grabbed is, the pleasure of seeing a beautiful aircraft above beautiful nature, beautifully shot. Our attention is definitely on the aircraft.

By widening the view and including a horizon, the message expands with the scenery. 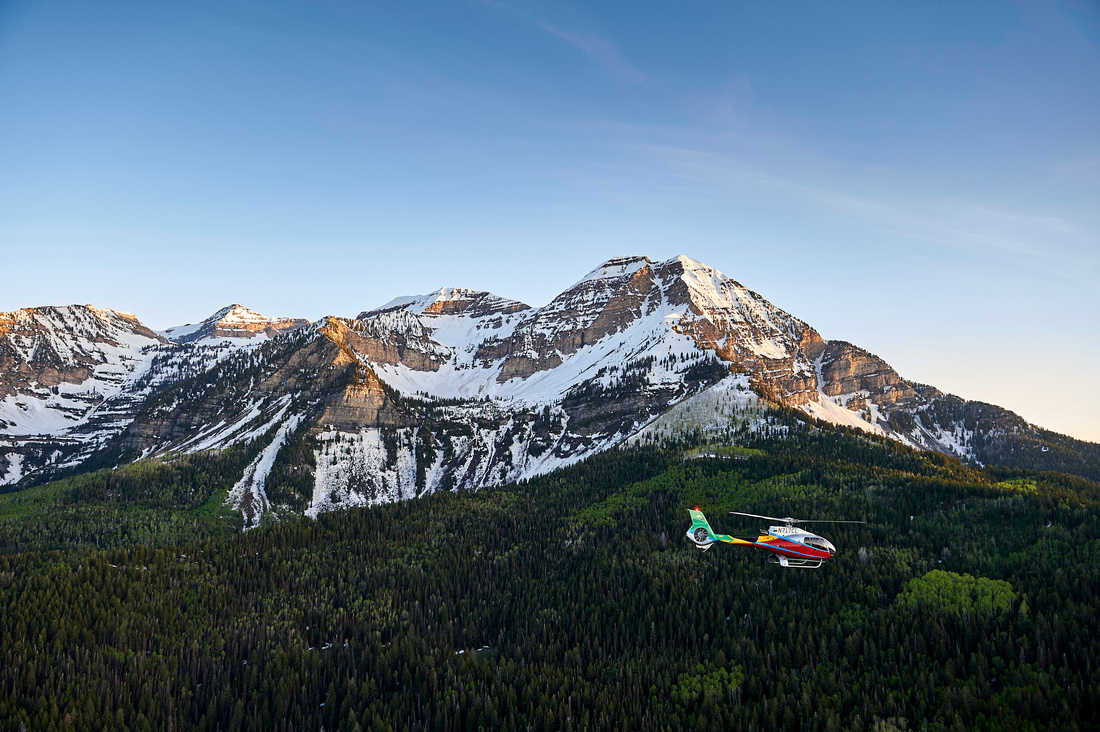 While the landscape in the first H130 photo was beautiful, this second image places the aircraft amid the grandeur of mountains. Cruising 'neath snow-capped peaks. Each image is good, each can play a role; but they are definitely different and should be shot and chosen accordingly. Showing the horizon is part of how the second one works the way it does, and by framing the aircraft against the ground, the image is communicating "aircraft among the mountains." It is almost part of the scenery. 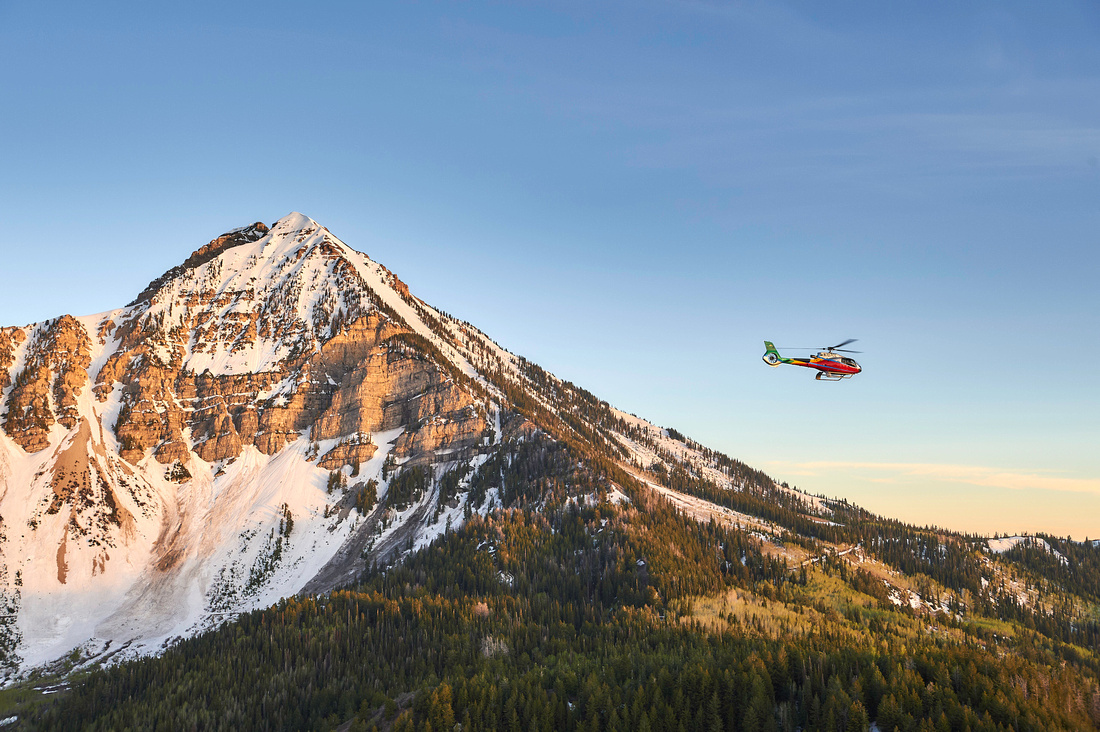 The reason I emphasized "aircraft among the mountains" is to contrast it with this image of the H130. In neither image is the horizon a flat line, dissecting the composition, but they are the same in how the mountains divvy up image. What's different is, by framing the aircraft against the sky, this image communicates, "aircraft over the mountains." It is not part of the scenery, it is taking it in. Commanding the heights.

The horizon didn't move, but where the aircraft appeared, against which of the two parts of the background, made a meaningful difference in the character of the scene; in how we perceive the role of the helicopter in the world.

If you want some energy in a scene, showing the aircraft in a bank is a useful technique. 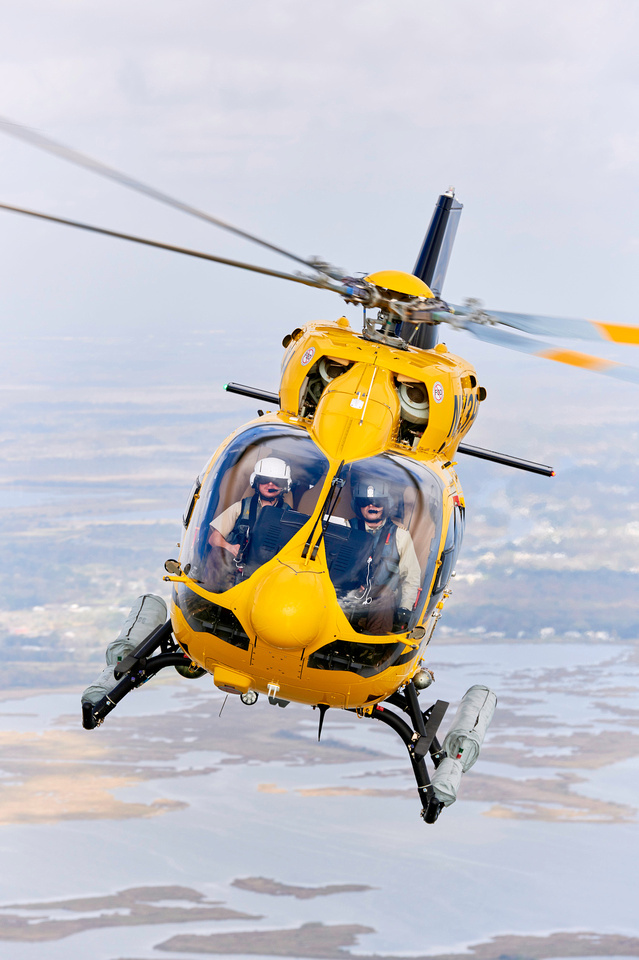 The horizon is not really visible, beyond this H145 over the Gulf of Mexico coast, but we perceive it is back there, nice and level (about a third of the way down from the top of the frame, so, yay rule-of-thirds?). The point is, the aircraft is canted over, which adds a bit of energy to the composition. I kinda wish it had more energy … 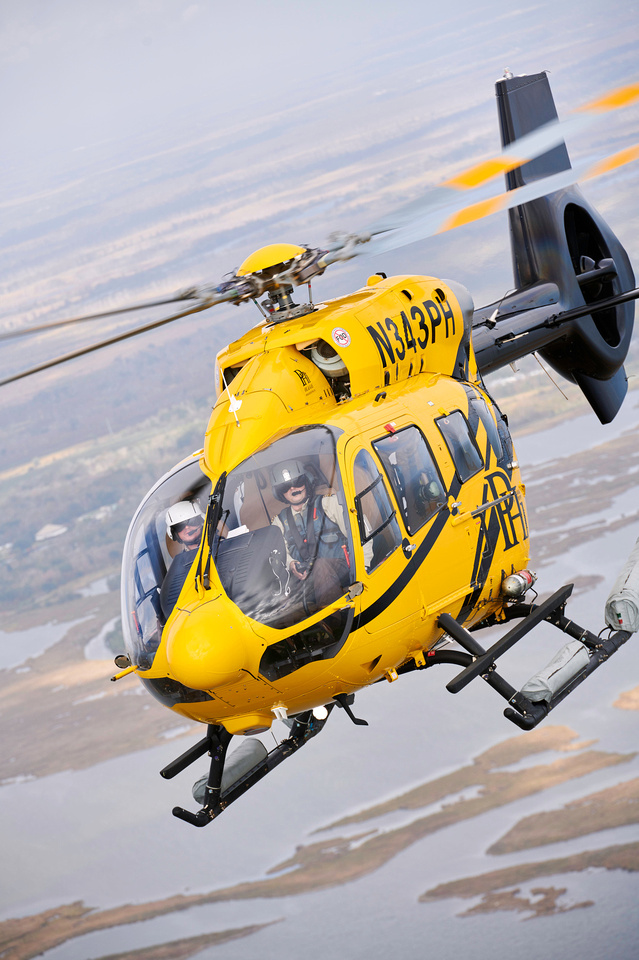 … so I rolled my camera to the right and let the horizon roll left. We're not head-on, and the aircraft is actually more level to that invisible horizon than it was in the previous image, but there's definitely more energy here. 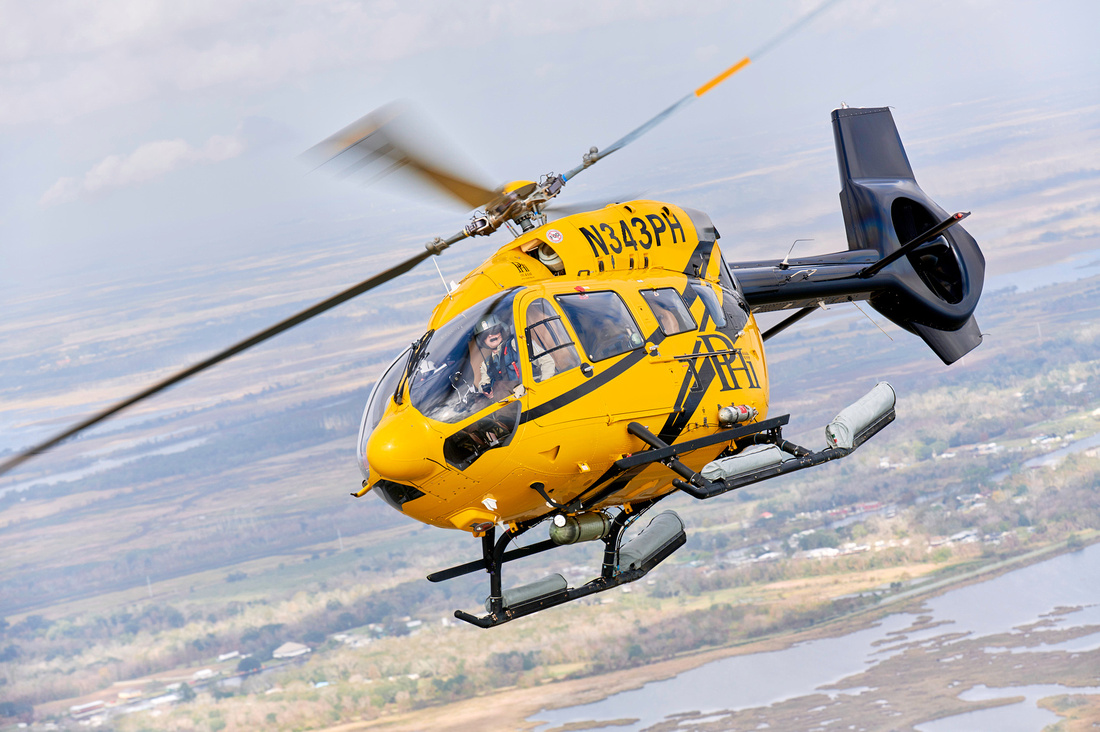 And even if the aircraft is adding visual energy on its own, a tilt of the camera — even when it visibly tilts the horizon — can be a powerful, additive, technique.

I wrote an article, in late 2019, about a feature I create for each issue of ROTOR magazine, called FlyOver, wherein I shoot through the cockpit to include both the interior and the environment (which you can read here). As one element of those images is apropos to today's topic, I will add an image from a more recent such flight (though not the image that appeared in the magazine). 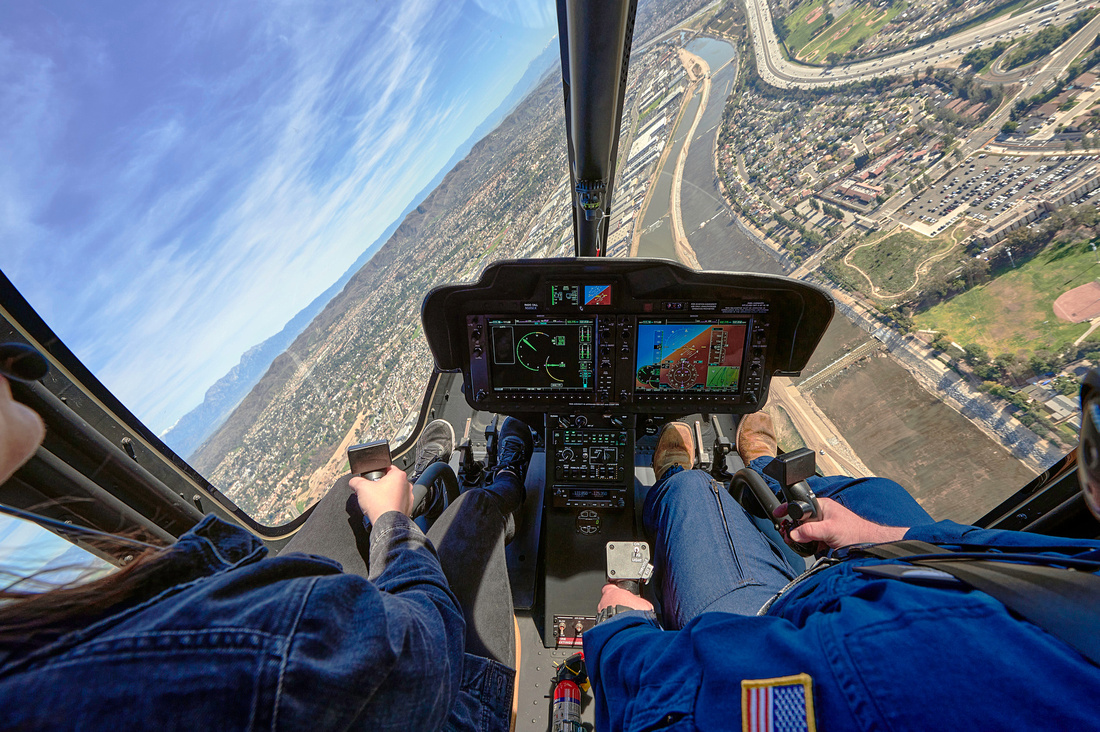 We are in a Bell 505 over the Santa Ana River in Anaheim, California, where I kept my camera level with the helicopter and had the pilot bank the aircraft. I just love the feeling of "we are really cranking this sucker around" that is induced by the level instrument panel contrasting with the tilted horizon.

I see two two-component elements in this image: the people and the cockpit, the ground and the horizon. Each of these is interesting in its own way, and by drawing the viewer's eye around the image, inside to outside and back again and again, that viewer spends quality time with the image. That's a good thing.

Sometimes the horizon is there to give stability. Sometimes it, instead, adds energy. So, what's a photographer to do with a horizon? The best advice is: put it where it makes sense in the image. Put it where it best conveys the relationship of the subject to the environment, and of the viewer to the subject. Place it where it best supports the message that is intended.

The funny thing about the horizon, that divider between land and sky, is that, as a “thing,” it doesn’t exist. Similar to how a hole is defined as a lack of earth in the ground (the hole, itself, is not a manifest object), a horizon is the mere visual connection between the ground and the sky, not some collection of atoms that can be poked or stroked. And unless you are standing in a hole, where the edge of that hole is where your view of the sky meets your view of the ground, you can never actually reach the horizon. For a thing that doesn't exist, it can be pretty darn important.

Thanks go out to, from the top, Bristow Group, Cirque Lodge, PHI, and Bell Flight, for their cooperation in the making of these images.