Looking Forward To It

Beginning last year (which would make it 2018), I have been photographing from inside helicopters looking forward through their cockpits for the trade magazine Rotor. The chosen image from each flight appears as a two-page spread with a minimal caption. These are relatively simple projects, but bring challenges that are not often encountered otherwise. I'll start with the first image that has run in the series, as it touches on those challenges. 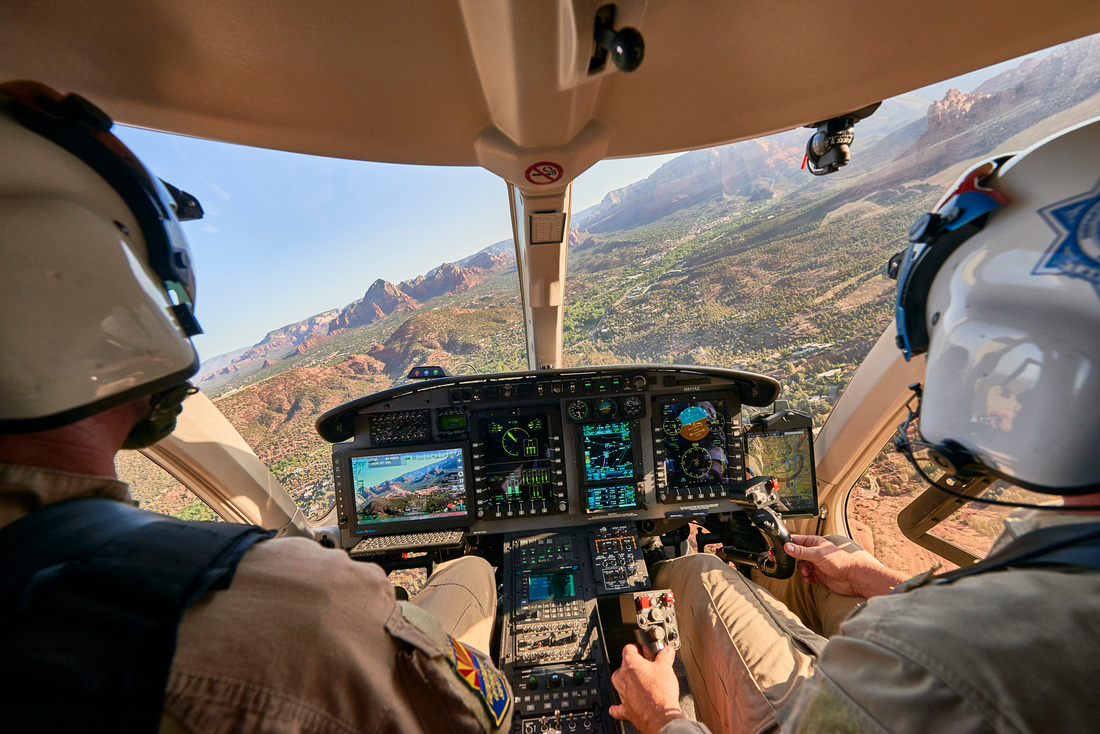 I am in the cabin of a Bell 429 flown by the Arizona Department of Public Safety. It's a fairly new aircraft model and, for Az DPS, a new addition to their fleet. Also, being a law enforcement aircraft, it is loaded with avionics including a camera under the nose with its controls and display seen on the left. So, check off "interesting aircraft."

The Bell is based in Phoenix but for this photo mission we headed up to Sedona. Why? So I could satisfy my second desire for these photos: interesting scenery. That might mean beautiful, as here, or it might mean unusual (we'll see that in the following example).

With those two desires met, what else does this photo reveal?

It reveals the challenge of showing both the interior, often in a mix of light and shade: a plethora of dark instruments hiding under a glare shield and a well-lighted exterior. And those are not just two challenges, those are four! I want the interior and the exterior both properly exposed, and I want them both well focused.

The scenery is in broad daylight, streaming in from the right, and the same daylight is streaming into the cockpit, but some of it is blocked from striking the black instrument panel while some of it is not. That's a lot of what's termed dynamic range, so judicious camera settings, a camera with the ability to capture a wide range, and the proper post-processing software and adjustments all play into taming those lighting challenges.

As for focus, I'll admit, even at the small size of the photos in this article we can see the helmets and shoulders of this fine flight crew are a bit blurry. But by the time we reach the radio panel we're good, focus-wise, as is the scenery. Depth of field, how much is in focus from near to far, is a function of the camera lens setting called aperture which, in order to capture focus near to far, requires the other camera setting, shutter speed, to be conversely slow, increasing the chances for blur induced by vibrations or bobbles of the airframe through the air.

I hear you and here they are. 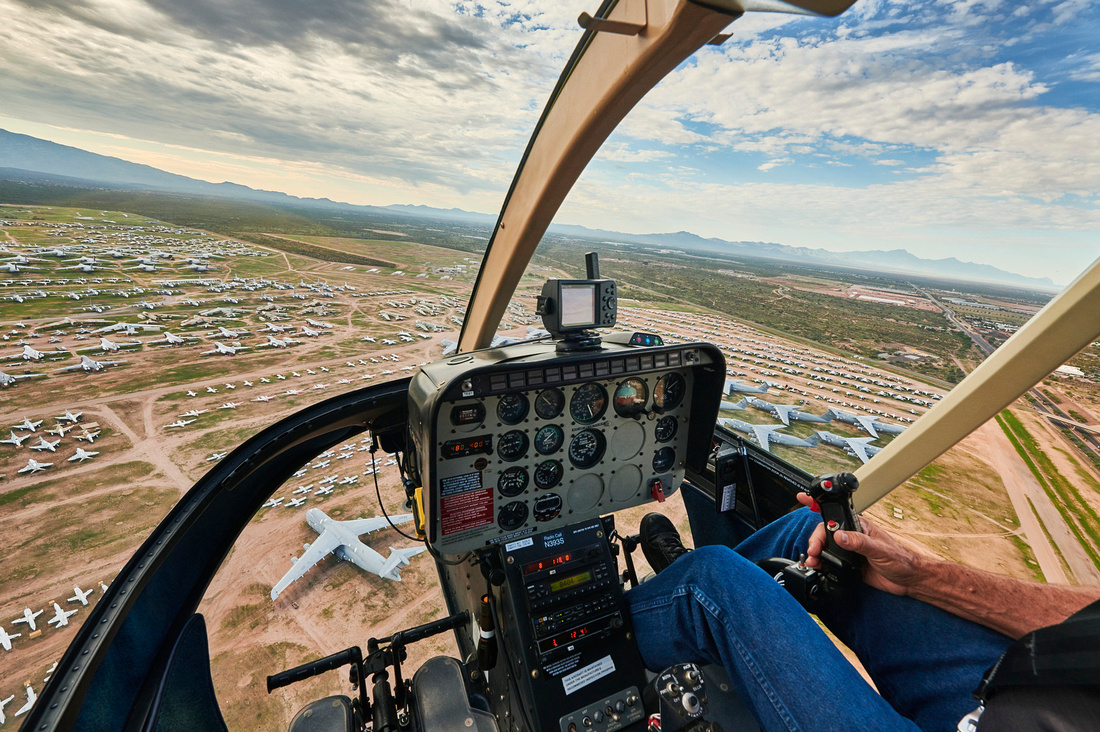 Welcome to the 309th Aerospace Maintenance and Regeneration Group on Davis-Monthan AFB. Colloquially called "the boneyard," it is temporary home or final resting place for thousands of aircraft from our military or other government operators. Airplanes, helicopters, a few rockets and, if I recall correctly, even a blimp's gondola. They store them, they might keep 'em ready to be flown out on short notice, or maybe it'll take longer but they can still get 'em flying, or they might strip 'em to use the parts on their still-active brethren. I've photographed there many times including, if you can find it, an article I shot and wrote several years ago for another trade magazine, Vertical. Nowadays, only bus-bound tours are allowed and there's a bunch of security you have to go through even for that.

Here, though, we get a view that very few people can muster — from 300 feet above the ground. I'm in the back of a Bell 206L3, courtesy of Southwest Heliservices, shooting through where a front-seat headrest would normally be. There's a structure called a "broom closet" between the front seats, so I couldn't shoot from the center of the cockpit, but the view is still great and, in this frame, I timed a shot through the chin window to capture a massive C-5 Galaxy.

On the topics of aircraft and scenery, I admit the aircraft is not particularly noteworthy. It is clean and well maintained, but otherwise nothing to write home about. So it's the scenery that makes this image. A view of a place that many find very interesting and, now, few can experience. 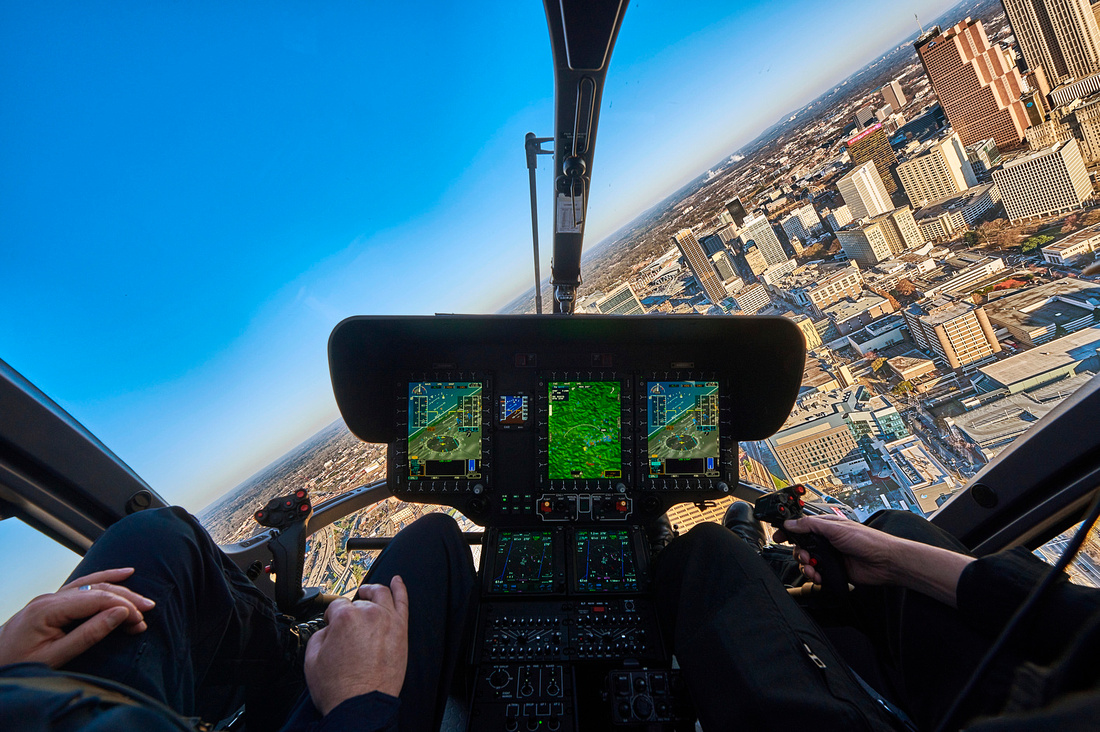 This shot is from an Airbus H135 over downtown Atlanta, Georgia. We arranged with Airbus for a flight during the annual helicopter trade show, Heli-Expo, knowing we could tie this photo, as its own standalone feature, to other coverage of the trade show in the magazine. 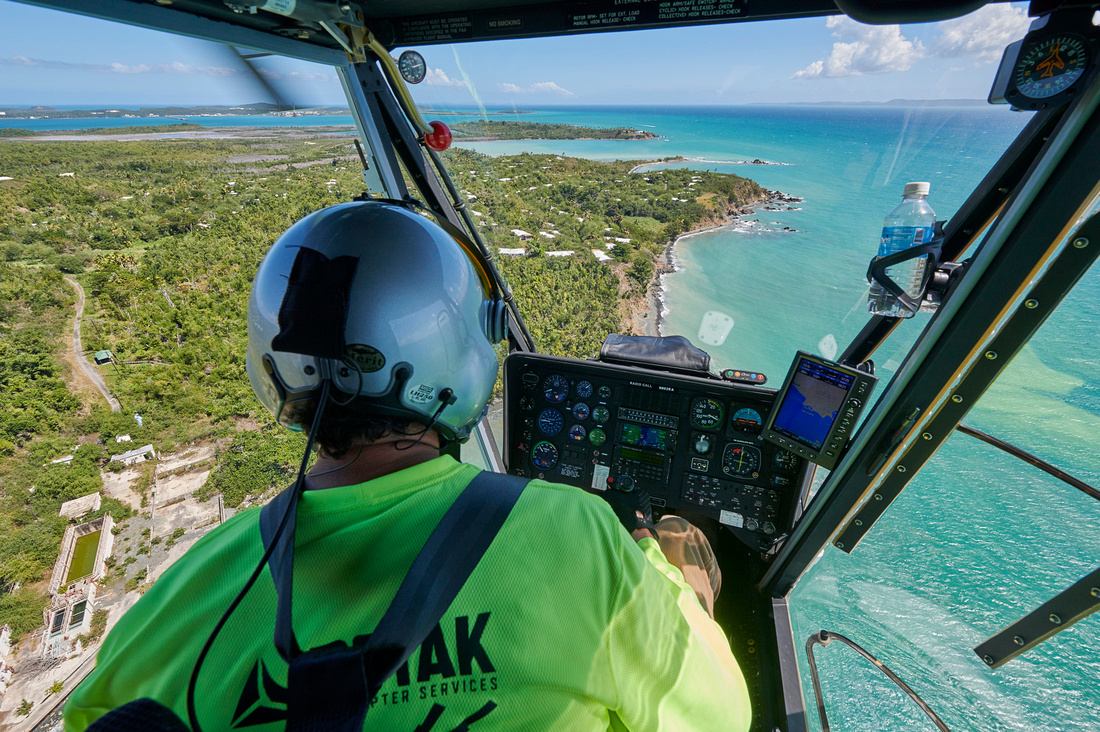 A bit farther south, and east, is the American territory of Puerto Rico, a victim of Hurricane Maria. Helicopters were one of the critical tools in repairing and rebuilding their electrical grid, and I've been there twice (as of this writing) to photograph those activities. One of the less usual aircraft in the world is also one of the best for much of that work, the K-MAX from Kaman Aerosystems, flown here by ROTAK Helicopter Services.

For this photo, though, you have to understand something about the K-MAX — it has but a single seat. So we rigged my camera behind the pilot, balancing security (first) with a desire to limit the vibrations and bumps from the airframe affecting the images, and attached a remote shutter release to the collective for the pilot to trigger during flight. Of more than 700 frames he triggered, just shy of 100 were not blurry — good job! Seriously. The aircraft has a surprisingly lively ride and choosing from among 100 is not a bad thing. 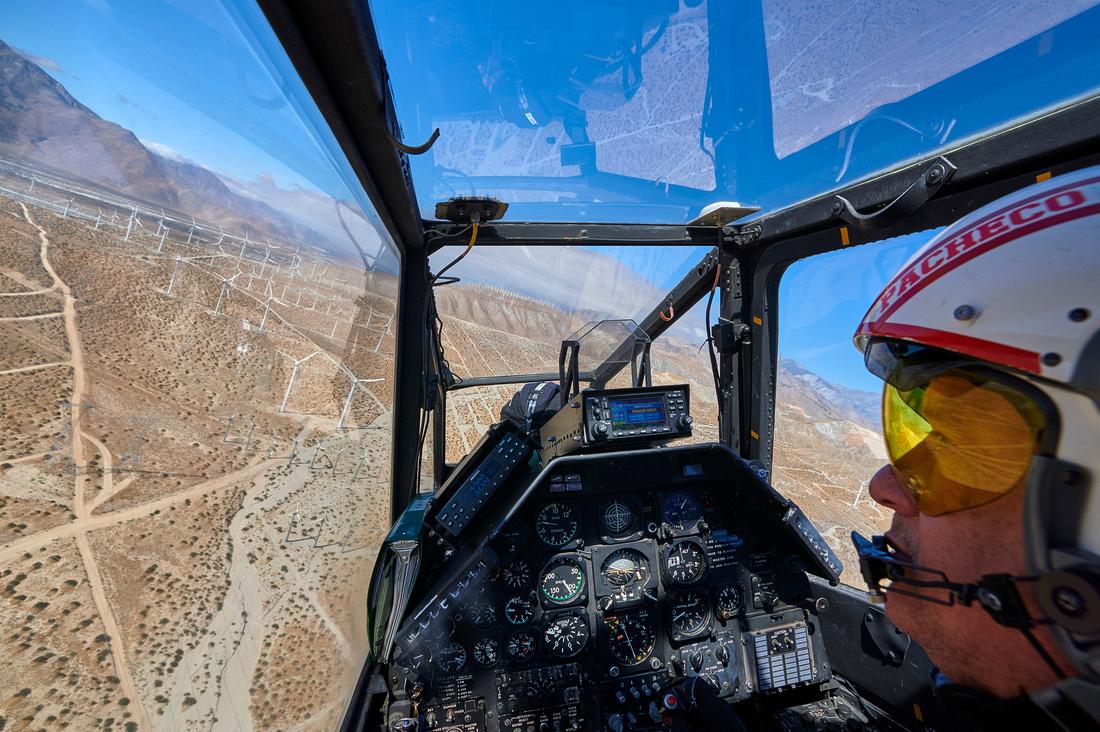 Lastly (so far), I was in Palm Springs, California, flying with the Army Aviation Heritage Foundation to capture the most recent image in the series. Unlike the K-MAX, this former US Army AH-1F Cobra has two seats but, like the K-MAX, we needed to mount the camera for remote shooting — the seating is in tandem and there's not much room behind the pilot. So we used a similar approach to mounting the camera and, in the front seat, I had the remote shutter release with me. We made a quick jaunt out to the wind turbines that dot the landscape and I came back with 100+ options. (Just in case the remote failed or the camera drooped, unnoticed, I carried another camera and shot from my seat, too.)

Notice how all except the K-MAX photo have a markedly angled horizon. That big diagonal adds visual energy to the image, plus I often find a delicious sense of vertigo when I look at these images.

Each image was shot with a camera sporting lots of pixels. The Az DPS/Sedona image is the only one captured with a mere 36 megapixels; the others gathered 42 megapixels! I mention this because you need a lot of pixels to create a high quality image that will be printed 17 inches wide in a magazine, and raw pixel count is one of the factors in obtaining quality.

Each image was also shot with a very wide-angle lens, in these cases, 14 millimeters on cameras with sensors the size of 35 mm film. I want to capture as much of the interior and the terrain as I can, to give the viewer a sense of being there, of experiencing that magic of rotary-wing flight.

As I stated early on, these are fairly simple projects. They are not, however, slam dunk easy — use the appropriate equipment, techniques, and post-processing prowess, to capture your own visions of life from the air.