Up. Down. All Around.

What do you get when you put a photographer — especially an aviation photographer — at or near an airport with a camera and time on their hands? You get photos of airports is what you get. This photographer, in particular, has an affinity for a graphic approach to what appears before him so, for your viewing enjoyment (and a bit of insight into what catches my eye), here are some of what I've captured over the years.

I was on a client assignment for two days at the Libby Army Airfield on Fort Huachuca, Arizona. Sometimes lots was happening, sometimes nothing — which, for me during the latter situations, meant "time to see and capture some interesting views." Here are three photos of the same ramp. 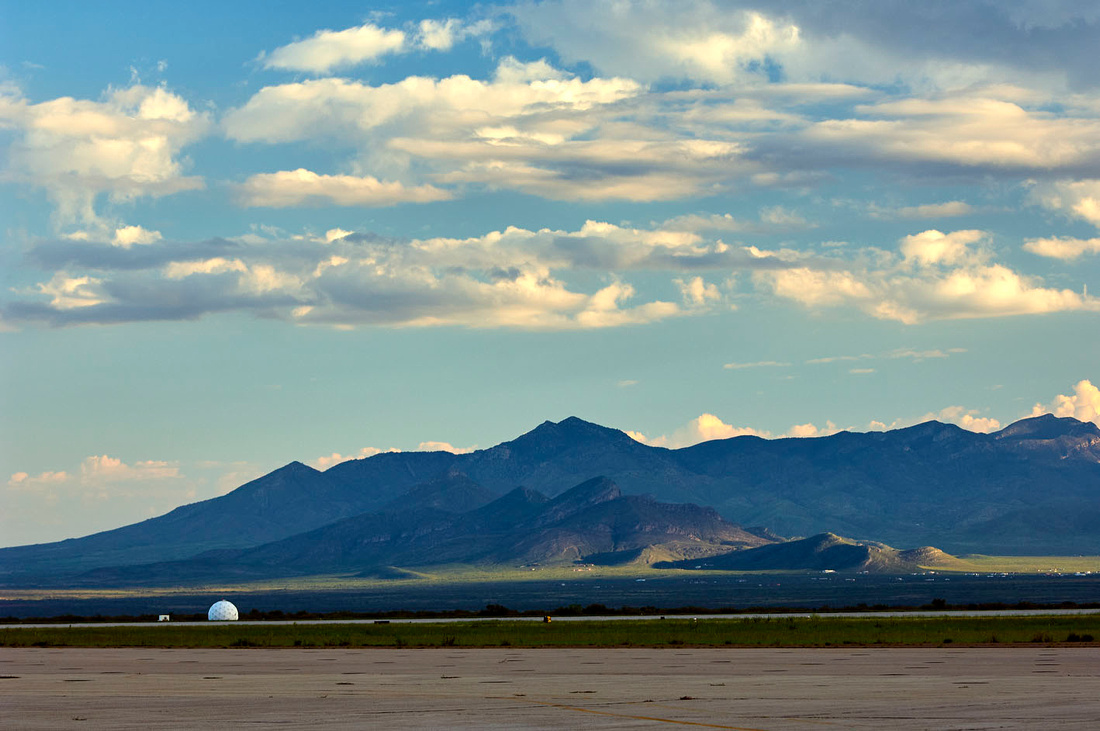 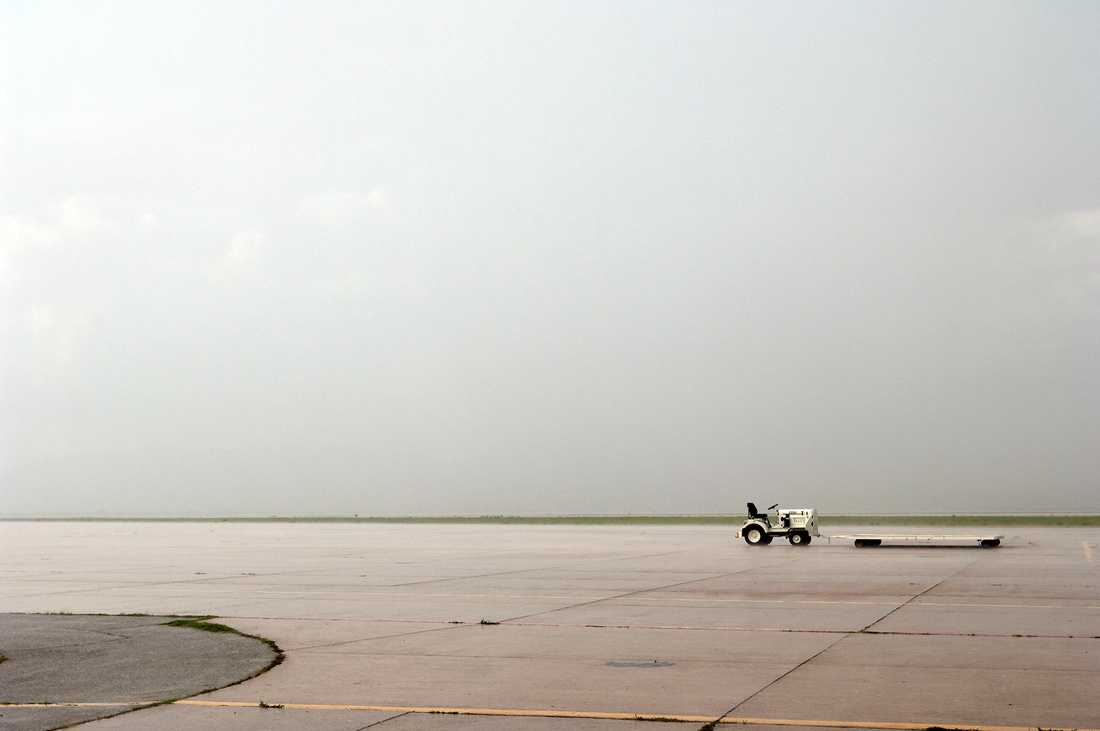 That same day, a late-afternoon summer storm blew in. There are mountains out there somewhere! 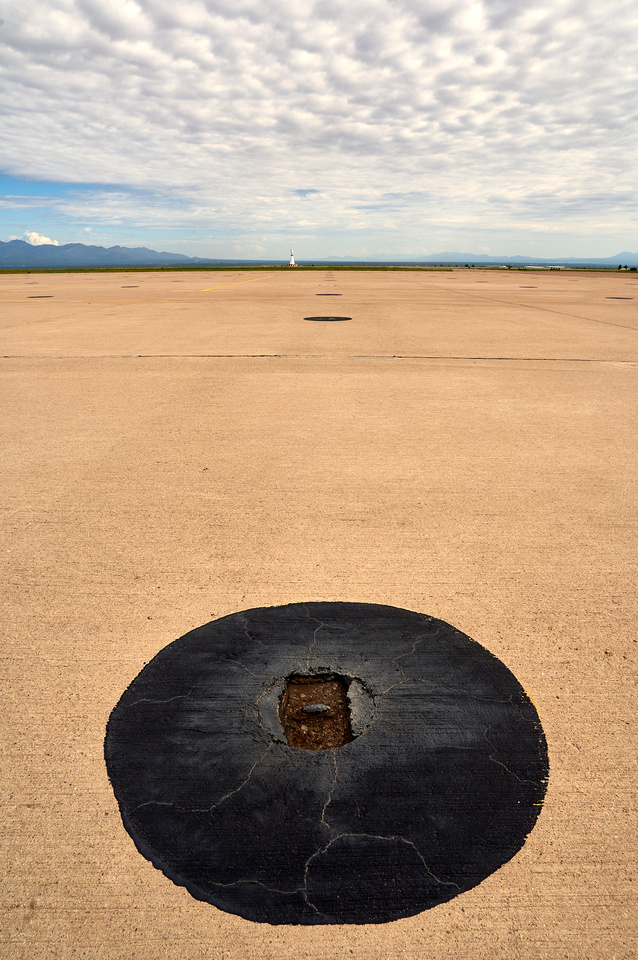 The next morning, there's a bit of water left standing in the tie-downs and the mountains are back!

Notice how I used three different lens focal lengths to capture each scene; a slightly "long" lens the first morning, a "normal" lens in the afternoon, then a wide-angle lens on day two. Each was chosen to include or emphasize elements in each scene. 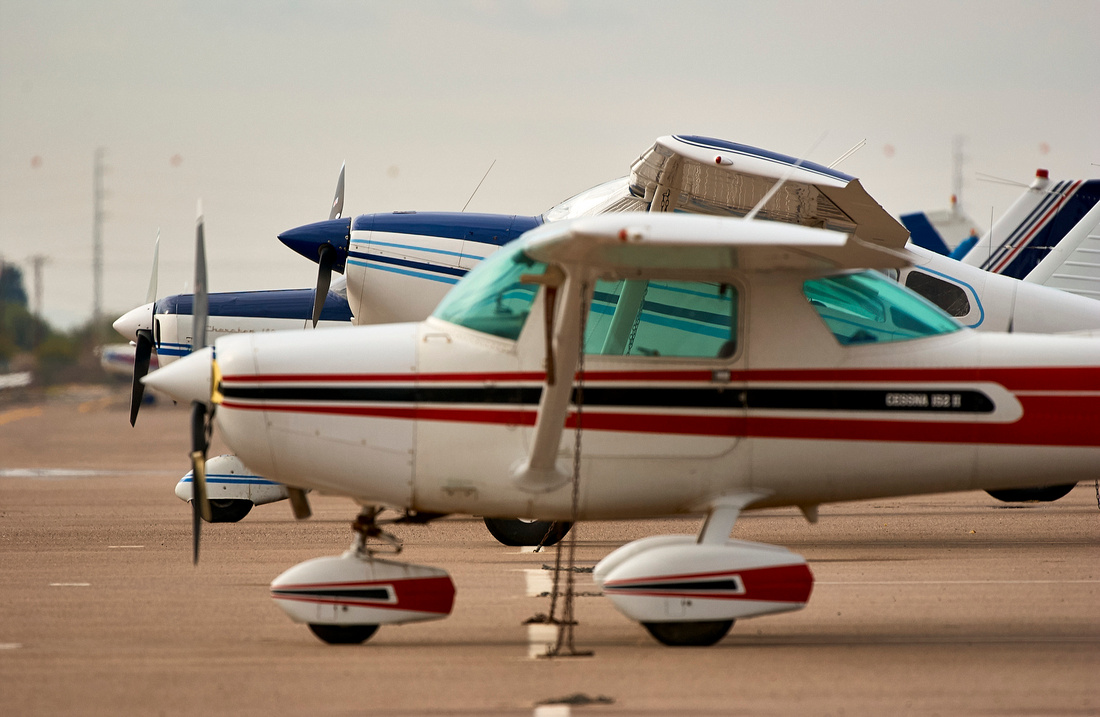 On the ground at a different airport, this one near Phoenix, Arizona, I happened upon a Cessna that had assumed an unnatural parking attitude. Letting the other aircraft clearly contrast with their skyward-pointed neighbor, I focused on the odd one and let it go at that. (I see tie-down chains descending from his wings, so I'm not sure what allowed a wind to upend him. Too much slack?) 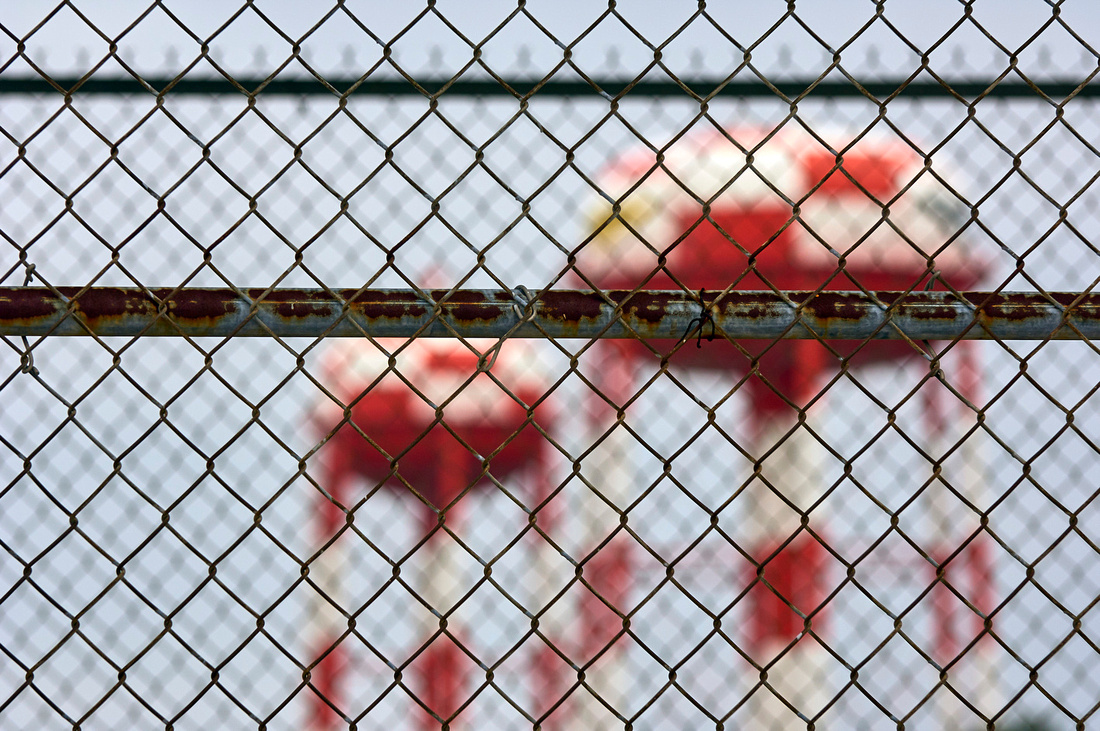 Naval Air Station Pensacola, in Florida, was drizzly the day I was there. That kind of cloud cover, and sometimes the cleansing effect of a little water on things, can embolden colors and contrasts. Even out of focus, it's impossible to miss these military water towers which, for no more reason than "I wanted to," I've focused instead on the fence. 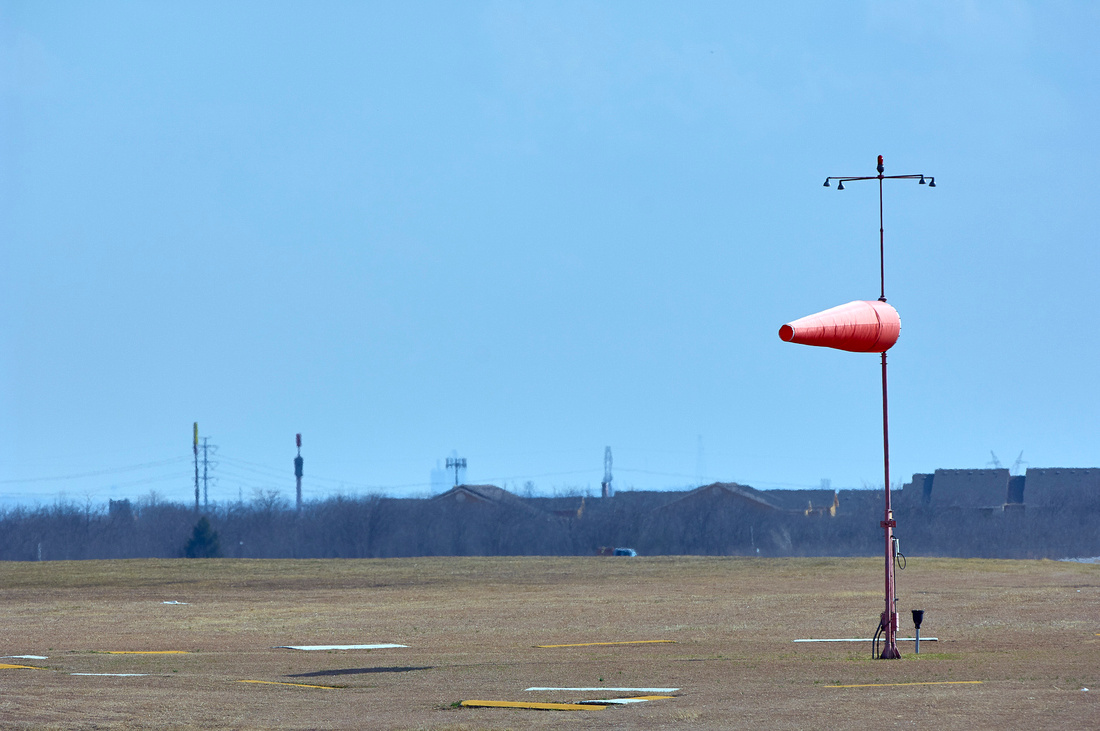 This is Grand Prairie, Texas, at their municipal airport. If you have some familiarity with aviation windsocks, you'll recognize a stiff breeze when you see it. Actually (and I had to look this up), to be fully extended like this, the wind must be at least 15 knots — let me tell you, it was at least 15 knots that day! I suspect the helos I was there to photograph had their work cut out for them. 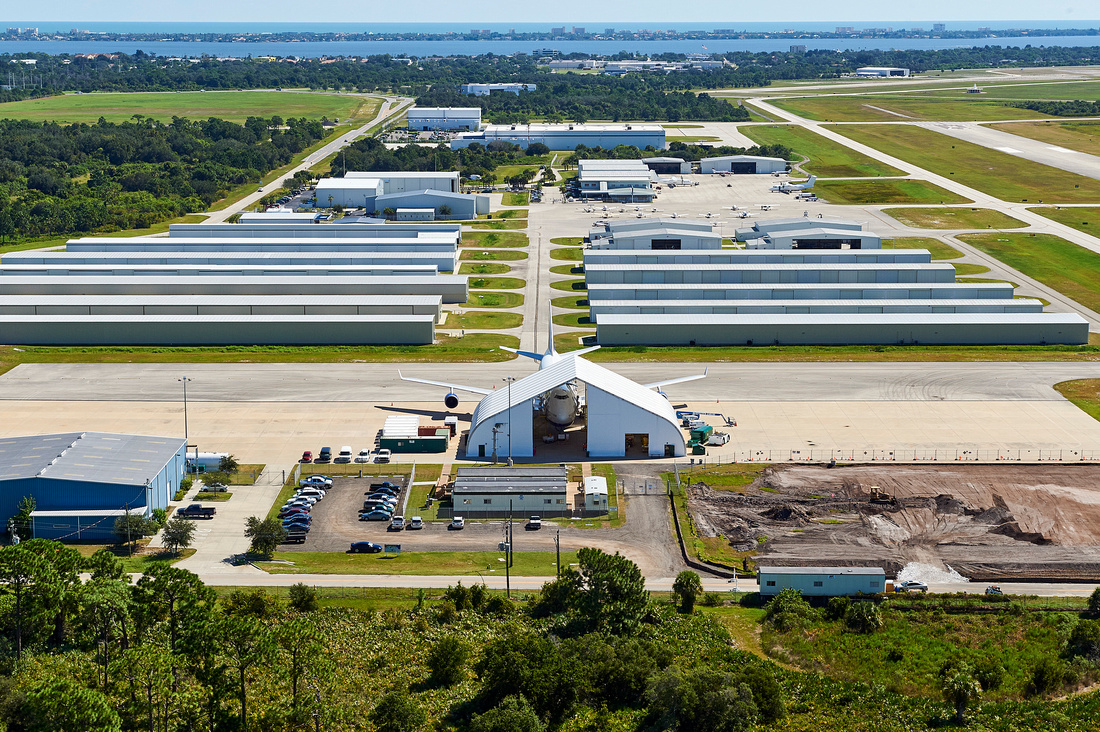 We're in the air now, looking at the airport in Melbourne, Florida. We made a few trips around this side of the airport to capture shots of the client's facility where, to give this image context, I made sure to include a view right out to the Atlantic. 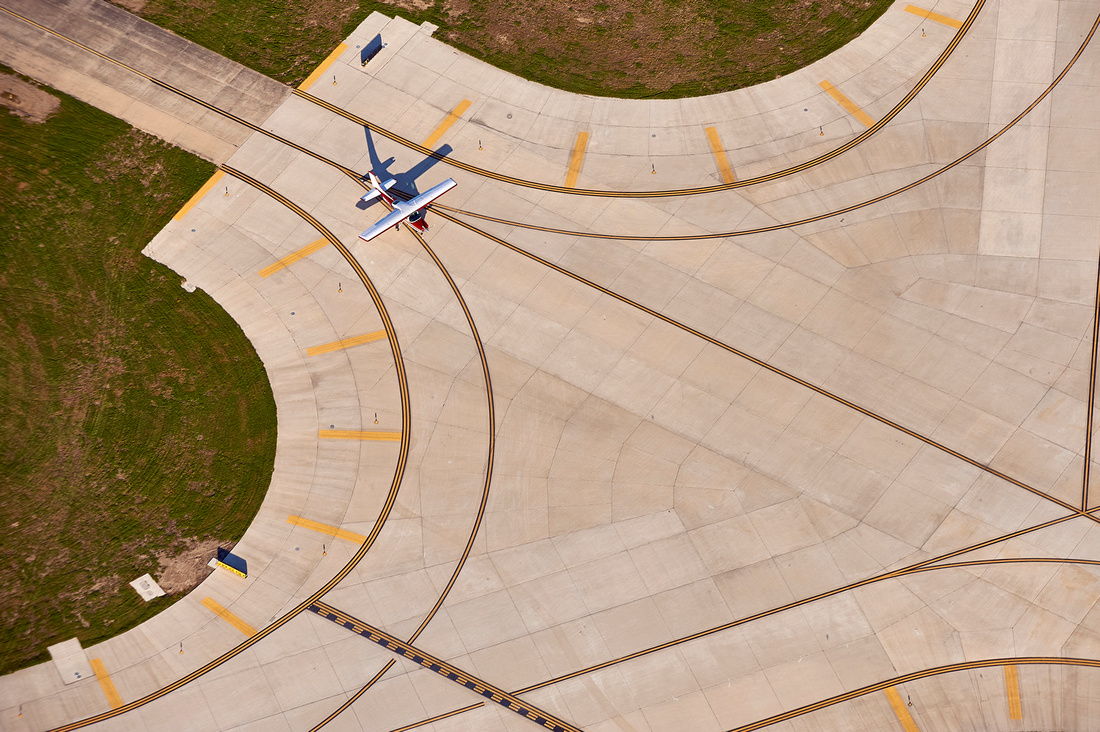 Houma, Louisiana, en route to some air-to-air with one of the offshore helicopter operators. This Cessna was taxiing as I was flying and, well, I took advantage of the opportunity to make a bit of art. 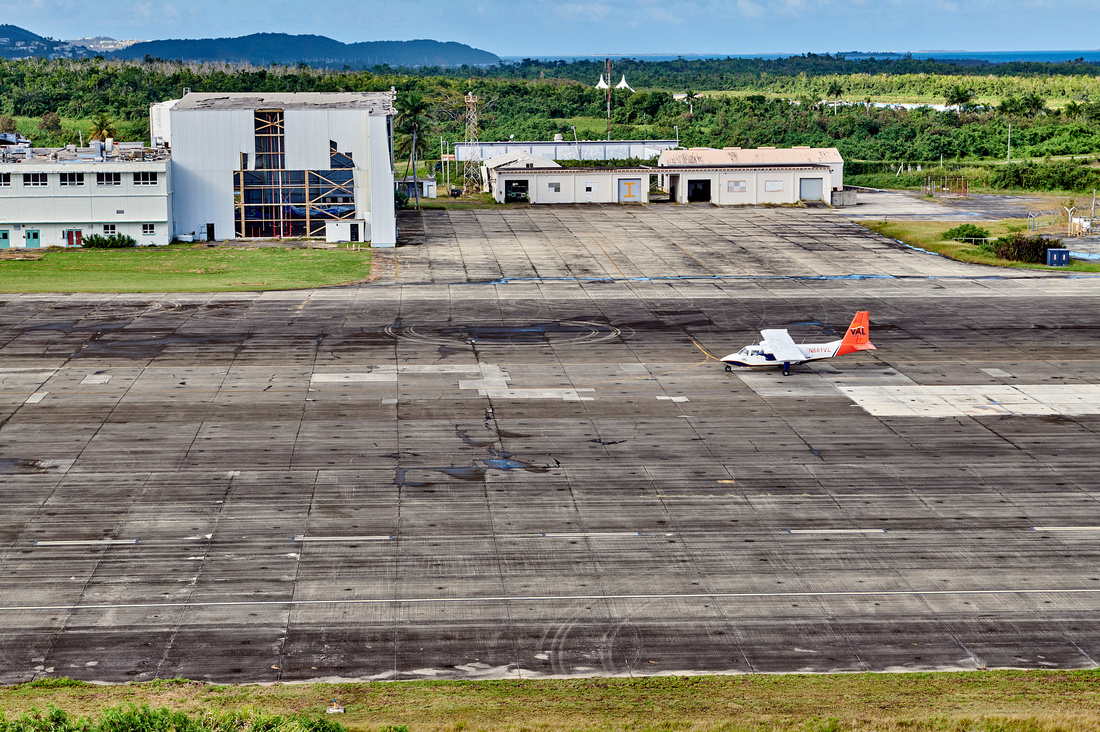 Ceiba, Puerto Rico, is on the east coast of the main island and, despite my being there 17 months after Hurricane Maria, as we were lifting off from Aeropuerto Jose Aponte de la Torre for some air-to-air work, I was struck by how much damage was still visible at an otherwise fully functioning airport. Notable here? That tall hangar building does not have transparent siding! 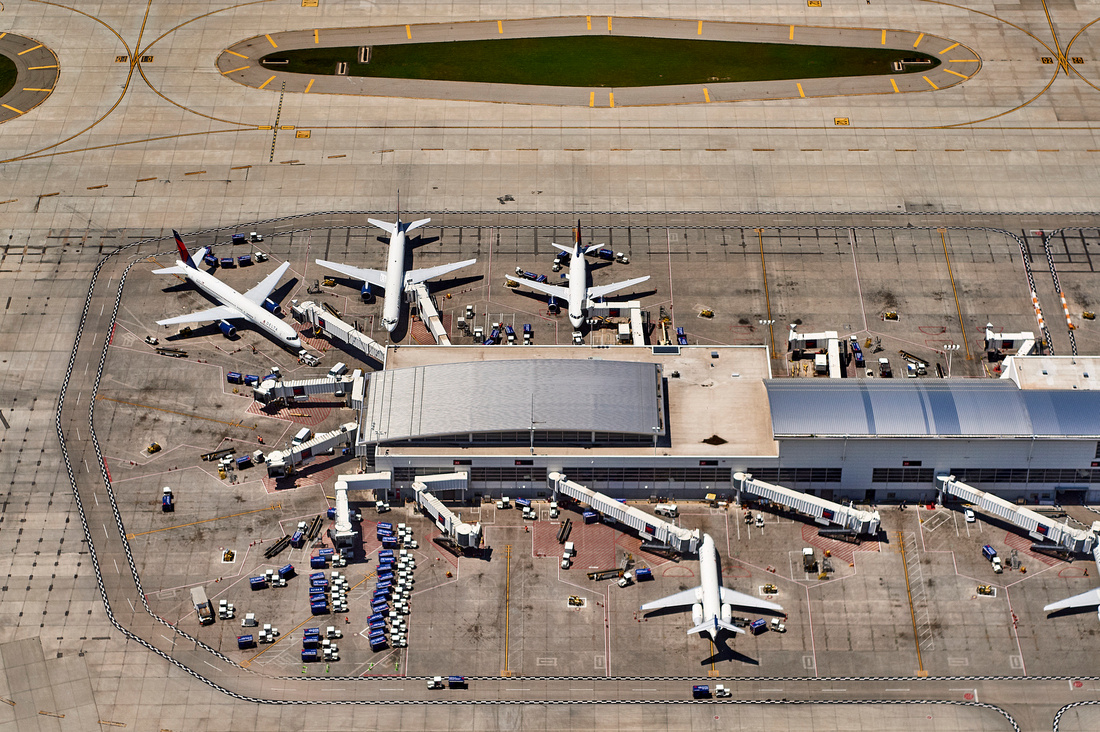 Lastly, here is Detroit's Metro Airport. A clean composition of a cluttered terminal area that visually contrasts with the empty taxiways and green spaces.

What can we take away from this short "what I did on my summer vacation" collection of images?

I suggest they show that opportunities for strong, aviation-related imagery might arise at any time and a good photographer will notice and take advantage of those opportunities. Even if the client is not an airport (though I have those, too), these more environmental images can find value for broader stories that might develop, in a slide deck or an annual report.

Don't let good imagery slip by, even if it's not part of the assignment — you never know when it will come in handy.

Your images of your K-Max are absolutely brilliant. So yes I was expecting to see that here - but I will wait for when you post it.
No comments posted.
Loading...
Subscribe
RSS
Recent Posts
The Frog in Your Hand From One, Many Too Many and Not Enough Background Players Opening Wide Up up up Not So Show-y Shooting the Hero The Long and Short of It Move Close and Say Aaah
Keywords
photography aviation technique composition helicopter airplane aerospace background focus Arizona
Archive
January February March April May June July August September October November December
Unless marked otherwise, all images are copyright © by Mark Bennett, all rights reserved.
User Agreement
Cancel
Continue