On a trip to Puerto Rico to photograph a specific type of helicopter for a trade publication, one of the shots I wanted was from inside the cockpit looking out at the world. It's a shot that benefits from a smooth ride, room in the cabin so I can compose the shot looking forward between, or beside, the flight crew, using my body as a shock absorber while touching the airframe as little as possible, and timing the shot when — hopefully — the ride is smoothest.

Here's a view of Puerto Rico I shot from just such a helicopter. This photo has a story of its own, but it's not the story I'm telling today.

The smooth ride is needed for a sharp photo despite the relatively slow shutter speeds required for helicopter photography. I've written about it before, but in short: photos of helicopters made with shutter speeds that are too fast result in images of aircraft that appear to be airborne for only the time it will take for them to fall to the ground. Fast shutter speeds render the rotor blades as though not turning. No turning rotor, no flying helicopter.

The challenges on this assignment involved all of the above because of the particulars of this aircraft type — a K-MAX from Kaman Aerospace. For those not familiar with it, here are the challenging features:

There is no cabin; just a single-seat cockpit.

The ride is, um, frolicsome.

The rotor speed is somewhat lackadaisical.

No cabin means I won't be along for the ride, and the pilot will have other tasks at hand, including his hands being busy flying the helicopter and, thus, unavailable for holding a camera behind his head.

In other words, the camera will have to be mounted to the airframe.

The frolicsome ride means the even-slower-than-normal-for-a-helicopter shutter speed I'll need to capture an appropriately motion-blurred lackadaisical rotor blade, if in one appears in the shot, combined with mounting the camera to the airframe will result in plenty of opportunities for blurry photos.

But if you want to make a photographic omelette, you gotta break some "rules" for photographing eggs. (Or something like that.) Anyway, here's what we did.

I looked around the cockpit and found a useful feature — a beam behind the seat with holes into which I could locate the base of my monopod. The monopod allowed me to locate the camera as high as possible without banging against the ceiling, and also to adjust the camera in pitch and yaw. The mechanic and pilot then used high-strength zip ties, and even the first aid kit mounting strap, to immobilize the monopod in space. Secure, but not rigidly mounted. 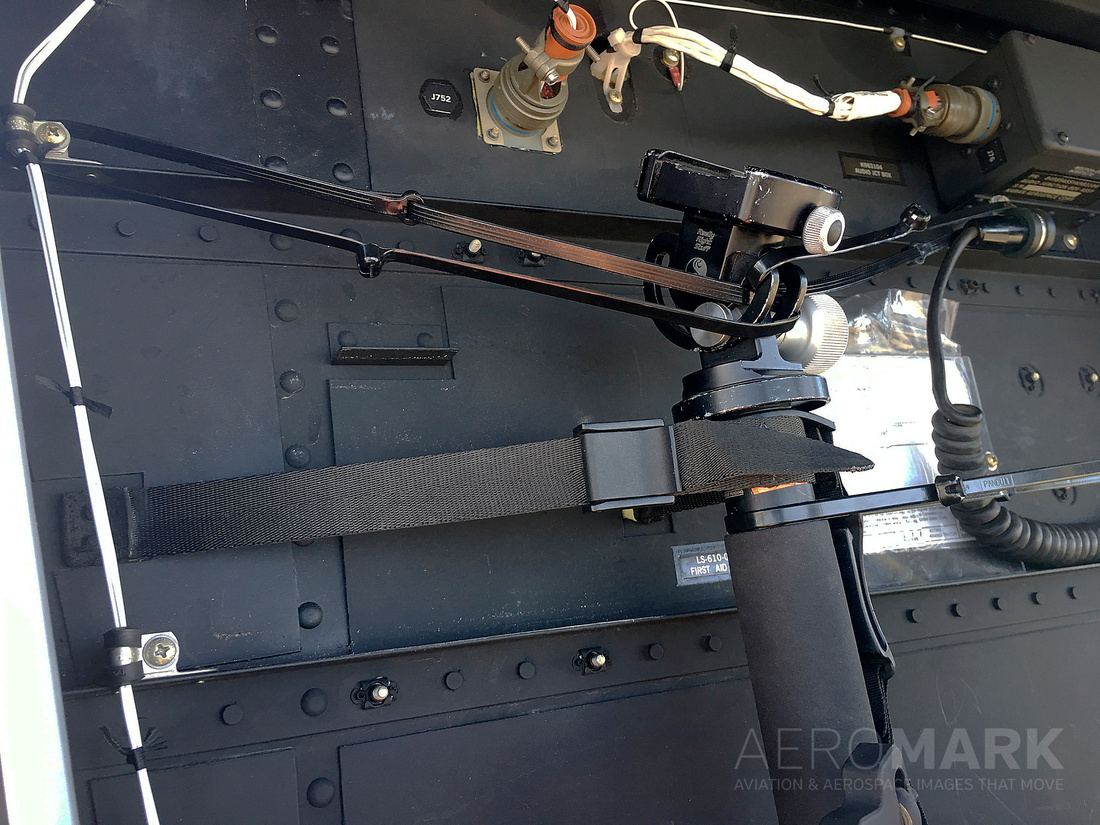 Here is the monopod, attached from multiple angles to be, how should I say? Delicately hog-tied? All these connectors are endeavoring to securely fix the camera, which would mount in the tilted jaws at the top, without imparting undue vibration from the airframe.

To the camera I attached a wireless shutter release. The remote was mounted to the collective, easily activated by the pilot while also out of sight from the camera's perspective.

We assembled the system, test-shot and adjusted the composition. I set the focus to be out a couple hundred feet (no need to have the camera hunting for focus during the flight anyway), and taped both the focus and the zoom rings on the lens so they could not inadvertently change. I also set the shutter speed higher than normal, despite what I would have preferred, because it would be better to come back with sharp images and less-blurred rotor blades than to come back with more-blurred blades and no sharp images. A trade-off, but one I figured was required.

With everything set, off went the pilot. He flew a short flight, returned, the mechanic retrieved the camera while the aircraft idled, and I reviewed the images. Judging there to be at least some non-jiggle-blurred ones, the camera was reattached and off went the pilot for a longer sortie. 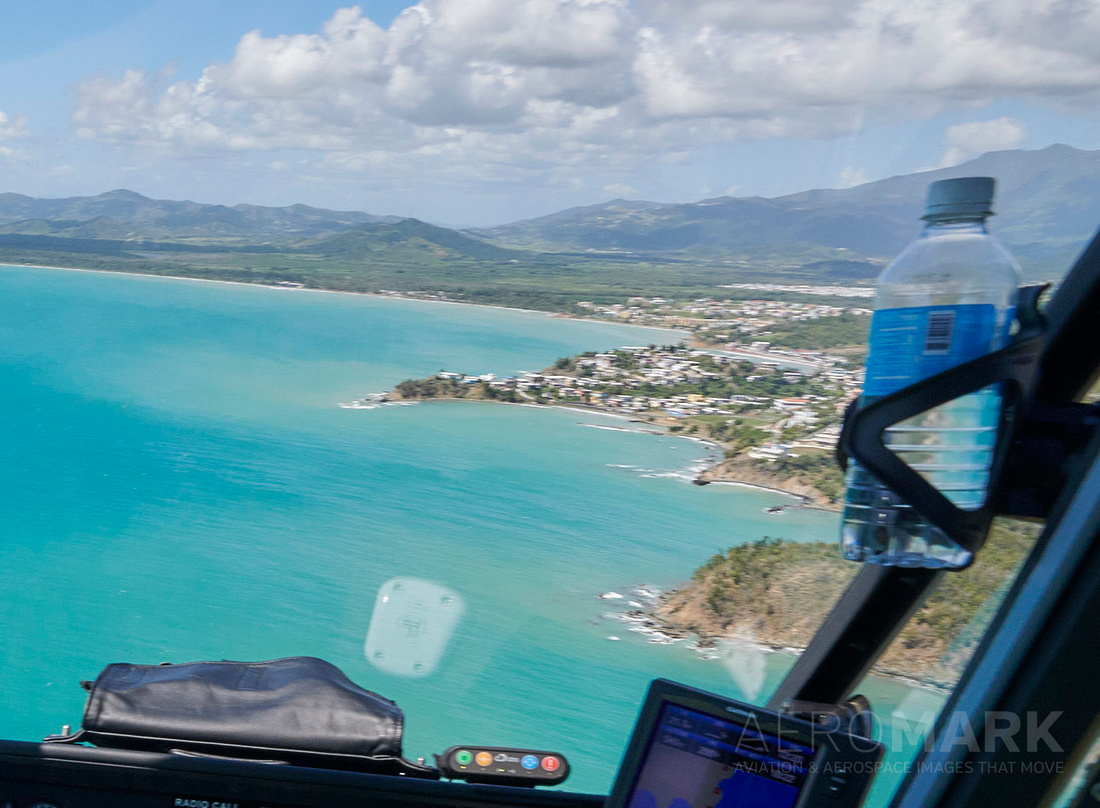 Here's a detail from one of the jiggle-blurred images. (Due to the small size of the images in this article, I had to isolate a small section to adequately communicate the result.)

How did we do? Of 404 images captured by the pilot, 276 were discarded out of hand for being jiggle-blurred. That's a lot of wasted, well, digits I guess. But digits are cheap, and having 100+ non-jiggle-blurred images gives me plenty to choose from. Plus, because the pilot planned for, and flew to, locations with varied scenery, the choice of which image to use is, delightfully, compounded.

Above, notice how there is sharpness not just outside the aircraft, but also as near as the instrument panel. The water bottle is showing up a bit soft, but from dashboard to scenery, setting the camera as I did captures almost everything in focus. Below, the full image. 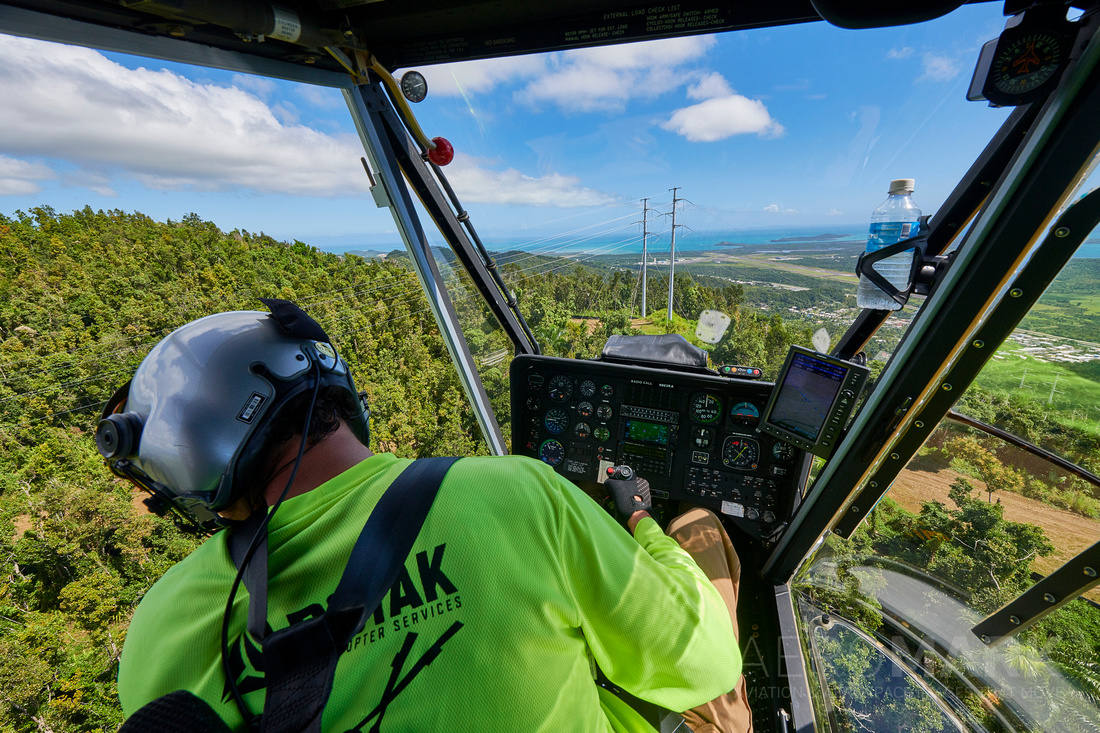 The point of all this is: I knew we were in for a bunch of blurry images and prepared accordingly. A camera must, foremost, be safely attached to an airframe, but with enough "give" in the system so as to not transmit every buzz and jiggle, these latter requirements being particularly important in a helicopter. Do the best you can and just know that throwing out 7 of every 10 means you still have 3.

My thanks go out to ROTAK Helicopter Services, especially Ely Woods, for all of their support and assistance in making these images possible.