In "Rigged to Jiggle," my article about mounting a camera inside a single-seat helicopter to capture a behind-the-scenes, I mean, a from-behind-the-pilot view looking out onto, in that case Puerto Rico, I mentioned a couple of issues that such mounting tried to accommodate in lieu of a human holding the camera. Here's what to do if a human is available and carriageable. 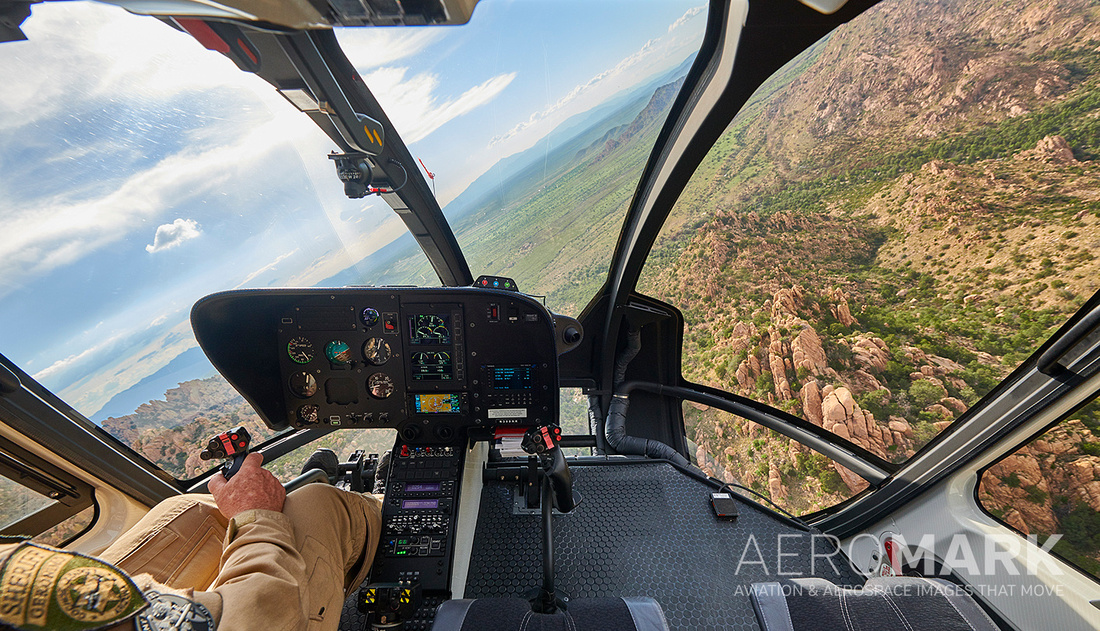 Where are we in the above? I'm in the back row of an Airbus H130 flown by the Cochise County Sheriff's Office out of Sierra Vista, Arizona, and the pilot is orbiting a spot in the Dragoon Mountains, not far from the town of Cochise, population 50 (or so).

To make this image, I'm using a 14 millimeter lens on a full-frame-sensor digital camera with a shutter speed of 1/500th of a second. I'm not expecting to see a rotor blade in the image, swishing by overhead, but though this is a shorter exposure time than I use for air-to-air photography, in the few frames in which a rotor blade makes an appearance, it is plenty blurry. And that's a good thing.

I'm holding the camera with both hands and keeping it as level as I can, relative to the airframe, because I want the banking turn to be registered as a tilted horizon, not a tilted fuselage. The sense of almost vertigo I find in these images is delicious, if you ask me.

In addition to holding on with two hands, I'm also positioned so my body is touching the aircraft as little as practical. These machines are abuzz with vibrations large and small, so I reduce the contact area between my body and the airframe, then use that very same body to dampen out what vibrations I can. Of course, I'm also altering the composition throughout the shoot, tilting up and down to include more or less of the interior, and positioning the camera nearer or farther from the instrument panel.

We're banking not just for a tilted horizon, but also I'm hunting for the right mix of scenery and lighting. Here, the sun is off to the left side, softened by high clouds but directional, giving the scenery noticeable three-dimensionality without blinding us.

Still, even with proper camera settings and good technique, not every shot will be a winner. It's best to shoot a lot. During the Cochise County flight I captured about 700 frames in a 45-minute flight. 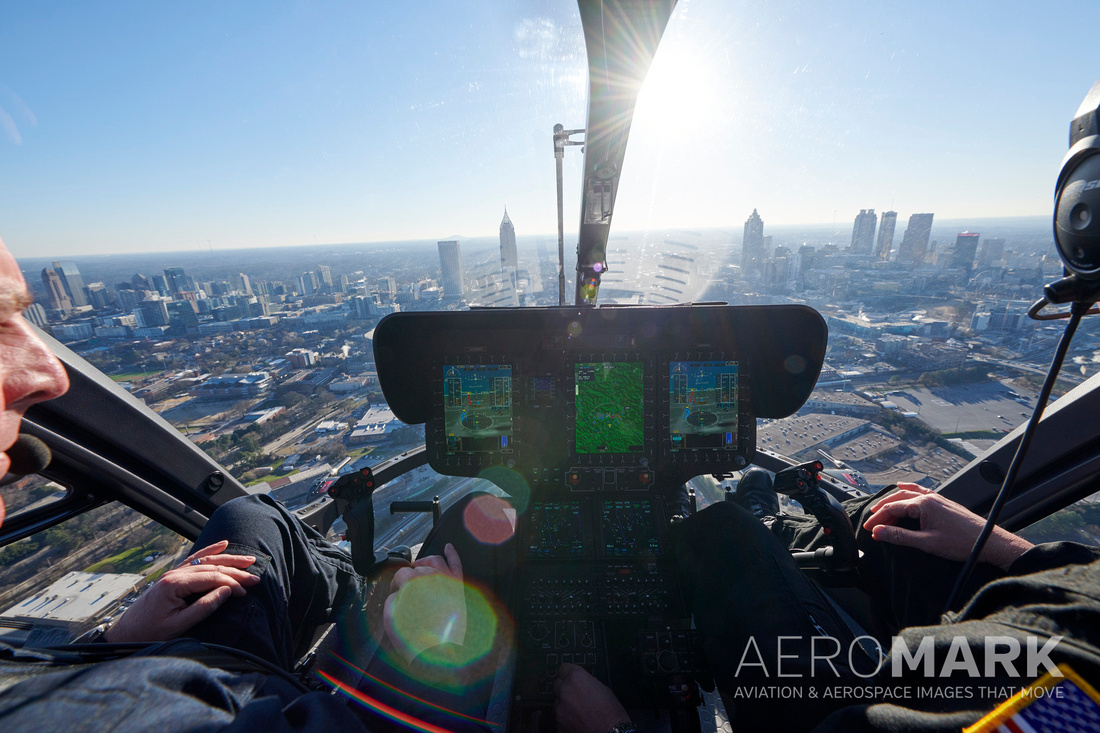 How about this shot from another Airbus, an H135, this time over Atlanta? Lots of problems here, mostly aesthetic.

Notice how dull the composition is with a level horizon? "Ho-hum, we're in a helicopter." The sun is glaring, literally and figuratively, into our faces and the lens. Lens flare is a reasonable choice in some images, but not for this one. We are seeing the shade side of the high-rise buildings, which renders them bluish and low in contrast. The instrument panel is, likewise, low in contrast, and thus low in detail. So much not to like about this shot.

But don't worry, I made 300 images in the 13-minute flight during Heli-Expo 2019, held in Atlanta, and a great one should appear in an issue of Rotor magazine, so I'll reserve that version for later. If light from the front is potentially problematic, what about from behind? This shot from a flight over Phoenix in the Arizona Department of Public Safety Bell 429 has the sun pretty much from our six. This gives us the potential for seeing great detail in the interior of the aircraft, with no sunlight in our eyes, but the city is rendered a bit dull with all that straight-in-its-face brilliance. So, better than being blinded ourselves, but not as good as it could be. (You can see the image that did go to print from this photo mission as a two-page — what's called a double-truck — image in the Fall 2018 issue of Rotor magazine.) 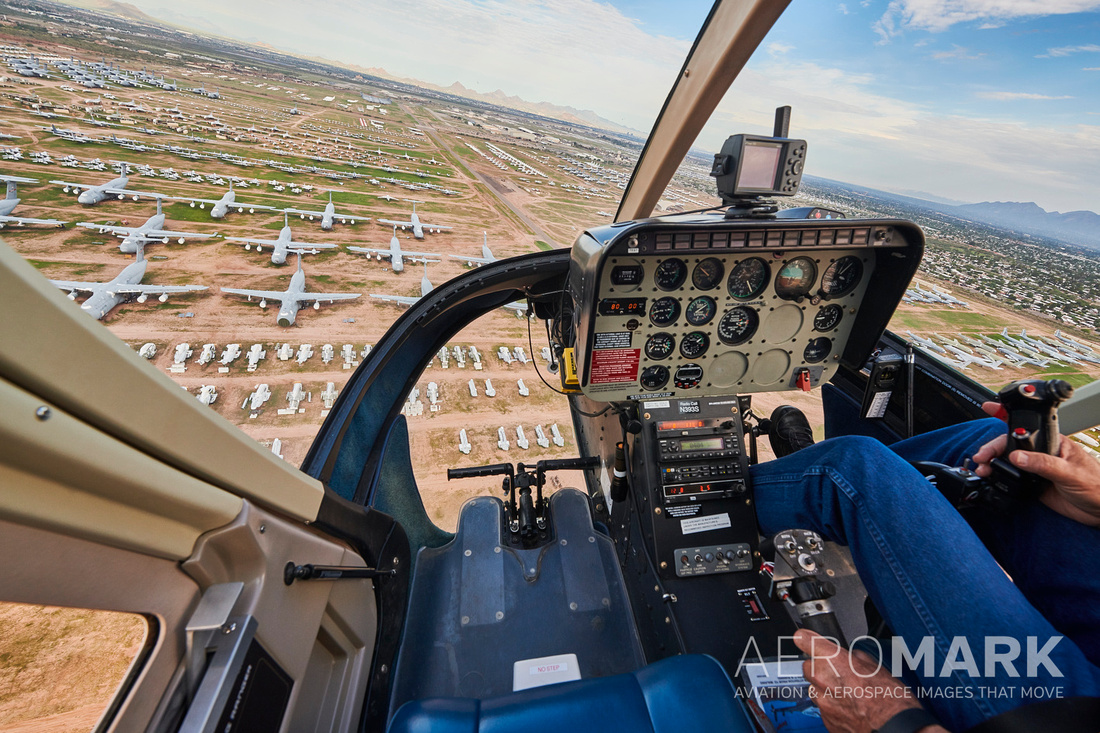 In this final example the sun was mostly hidden by high clouds, yielding a softer level of contrast that probably works well for the subject, the Air Power Reservoir on Davis-Monthan AFB, in Tucson. Colloquially referred to as "the boneyard," Southwest Heliservices flew their Bell 206L-3 low and slow on a few zig-zaggy passes over the collection of helicopters, cargo planes, bombers and fighters while I clicked off 600 images in fewer than 20 minutes.

The lower light levels on this morning led me to lower my shutter speed, to 1/200th of a second, to maintain an aperture setting capable of capturing clearly both the interior of the aircraft and the passing parade of planes below. That slower speed meant I had to be extra careful with what I touched and how I worked to keep the images sharp. With that many shots, you'd think I'd get a good one, right? I got several, including this one, and you can see another in — you'll never guess — the Winter 2019 issue of Rotor magazine.

So there you have it — float like a butterfly within the aircraft, set your shutter speed slow enough to blur a blade if one appears and, coincidentally, provide sufficient depth of focus so as much is in focus as you can get, put an interesting subject in front of the aircraft and orient the light source for attractiveness plus inside-and-outside visibility, all with a wide-angle lens on a camera capturing sufficient resolution to print large. And shoot a lot.

Many thanks to the Cochise County Sheriff's Office, Airbus Helicopters, Arizona Department of Public Safety, and Southwest Heliservices for their cooperation in making these images possible.