Putting the Muse in Museum

Whether for business or pleasure, museums and other densely packed collections of aircraft present not only a target-rich environment, but also a couple of challenges to capturing useful or interesting imagery. Here are some suggestions for overcoming those challenges.

One benefit to photographing in a museum, among static aircraft at an air show, or at a so-called "boneyard," is the aircraft are not moving. This obviates the need to react to rapid changes in composition, lighting, etc., but it also means there is more on your shoulders in terms of your chosen composition, lighting, camera settings, etc. If you just show up and start pressing your shutter button, you can expect your images to look like the next guy or gal's. Here's an example, sort-of. 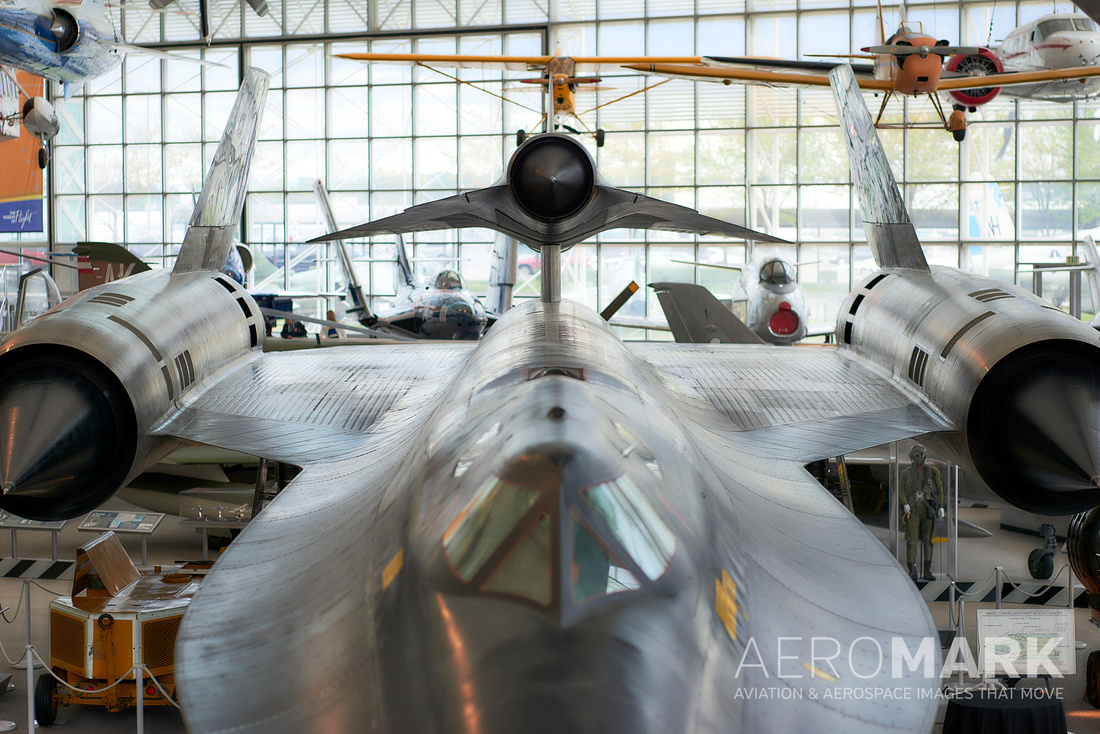 This is the Great Gallery of the Museum of Flight in Seattle, Washington. The aircraft at the center is the one-of-a-kind M-21, a version of the SR-71/A-12 family of spy planes, and carrier of the drone perched on its back. This photo actually focuses more on the D-21 drone by putting only it in focus and pushing the scenery outside the windows nearly to white, while keeping some of the M-21 in frame for context. The result works well enough, but the other aircraft still draw attention to themselves. (Note: the small size of the image, here, would suggest other aircraft are in focus, but in the high-resolution image it is clear (hah!) that even the drone, itself, is not fully in focus from nose to tail.)

Here's another approach — a four-frame panorama that features the entire M-21 but puts it in the context of the space. This perspective, the breadth of the image, really gives a sense of being there, which might be your task on behalf of a museum. 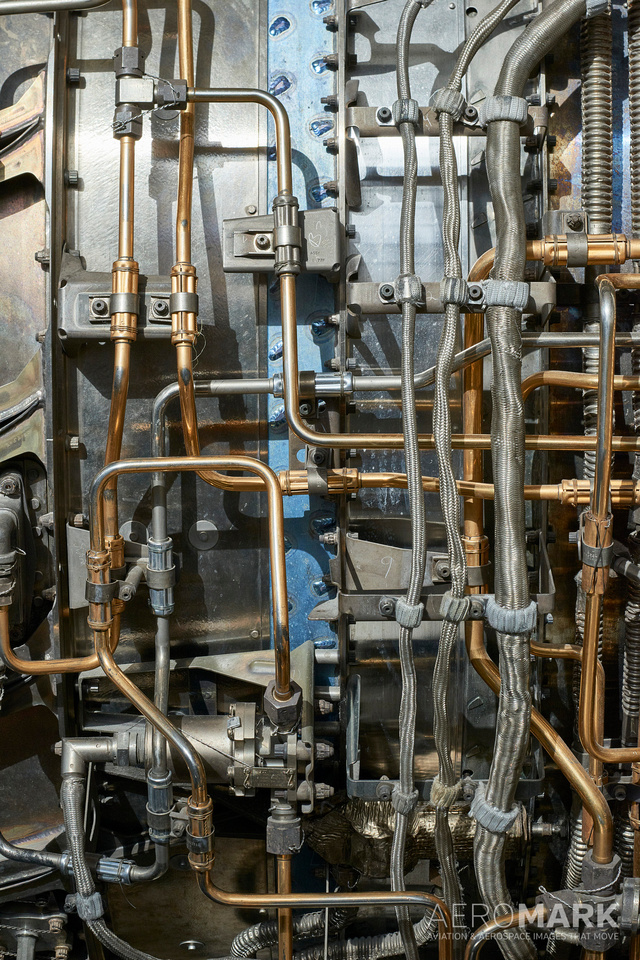 First medium, then wide, and here I present a close-up of one of the engines out of the M-21. I like the controlled chaos of all the wiring and plumbing. While the image is reasonably decorative on its own, ones like this might also serve as an adjunct to a larger story about a product or technology. But even in that role, there's every reason to approach the subject with an eye toward interesting beauty.

The Arado 234 B-2 Blitz is another one-of-a-kind aircraft, this one housed at the Smithsonian Air & Space Museum's Udvar-Hazy Center outside Washington, D.C. And like the M-21 it is inside a building, positioned amid other aircraft. And so, again, I used selective focus and detail shots to keep our attention on the subject. 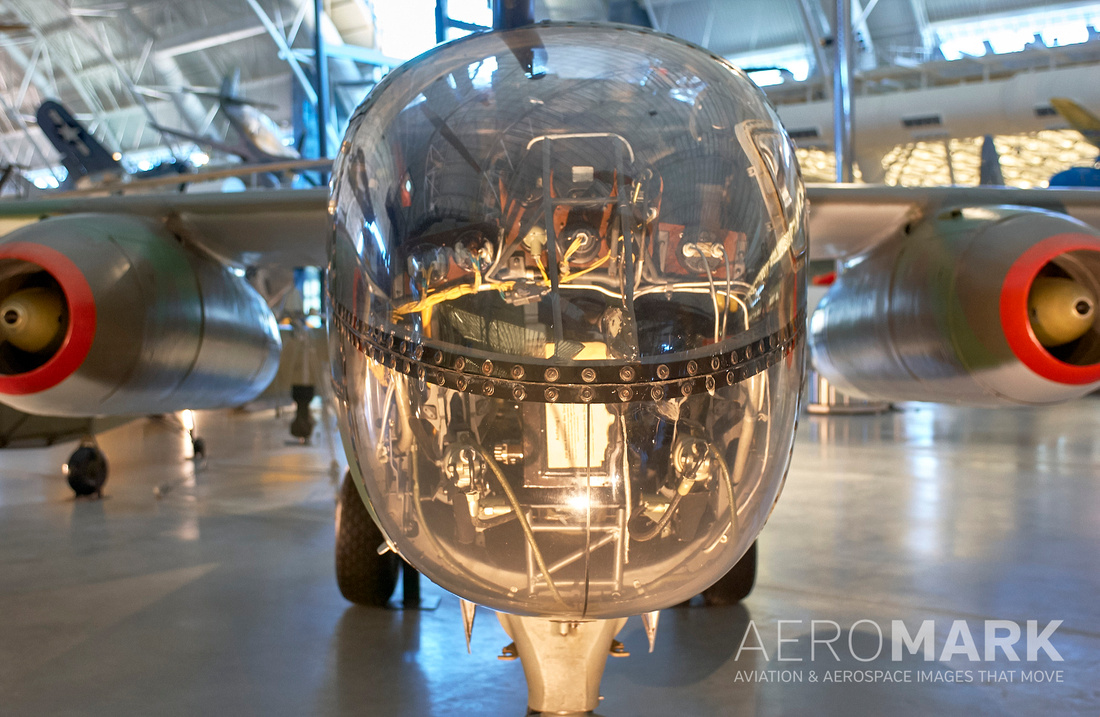 This head-on shot of the nose canopy doesn't show the entire aircraft, but suggests an evil grin among the structure and wiring of this 75-year-old jet. The museum already has great photos of the aircraft using controlled lighting, so I didn't need to recreate those. 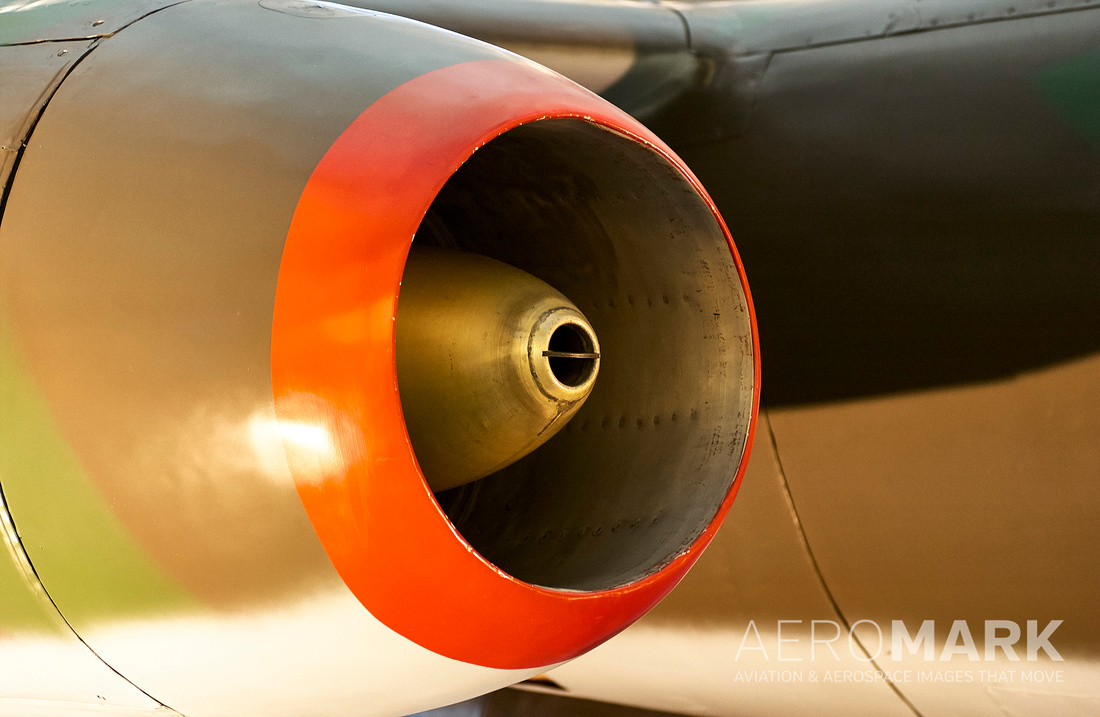 I also took care to capture this angle of one of its engines because, beyond the visual interest of the shapes and colors, I know the thin band of metal visible in that hole of the inner cone is actually a pull handle, like on a lawn mower, that cranks up a small piston engine which then acts as the starter for the jet engine. So cool! (Plus, what is it with me and engines?) 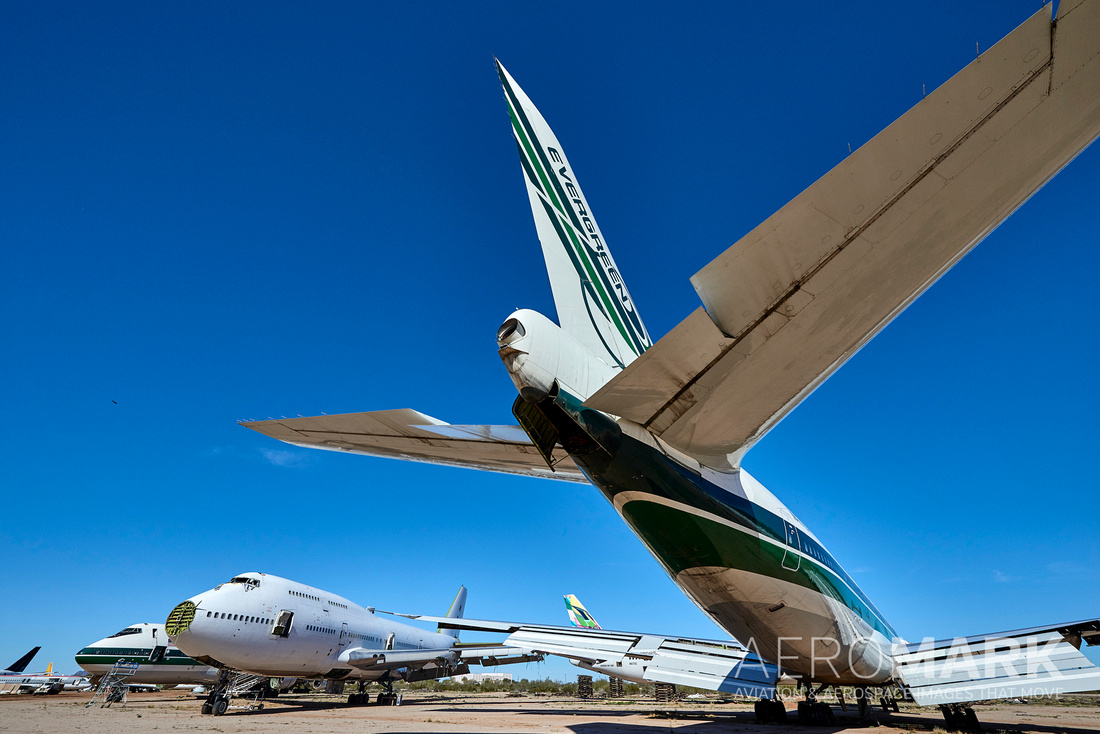 At Pinal Airpark, in south-central Arizona, a bevy of Boeing 747s are among the dozens of aircraft awaiting their respective futures. This wide-angle shot uses the near empennage to attract your eye by dominating the frame, then the fuselage pulls you forward, then the left wing points you to the other aircraft. It's an unusual composition that, nonetheless, tells an unambiguous story. 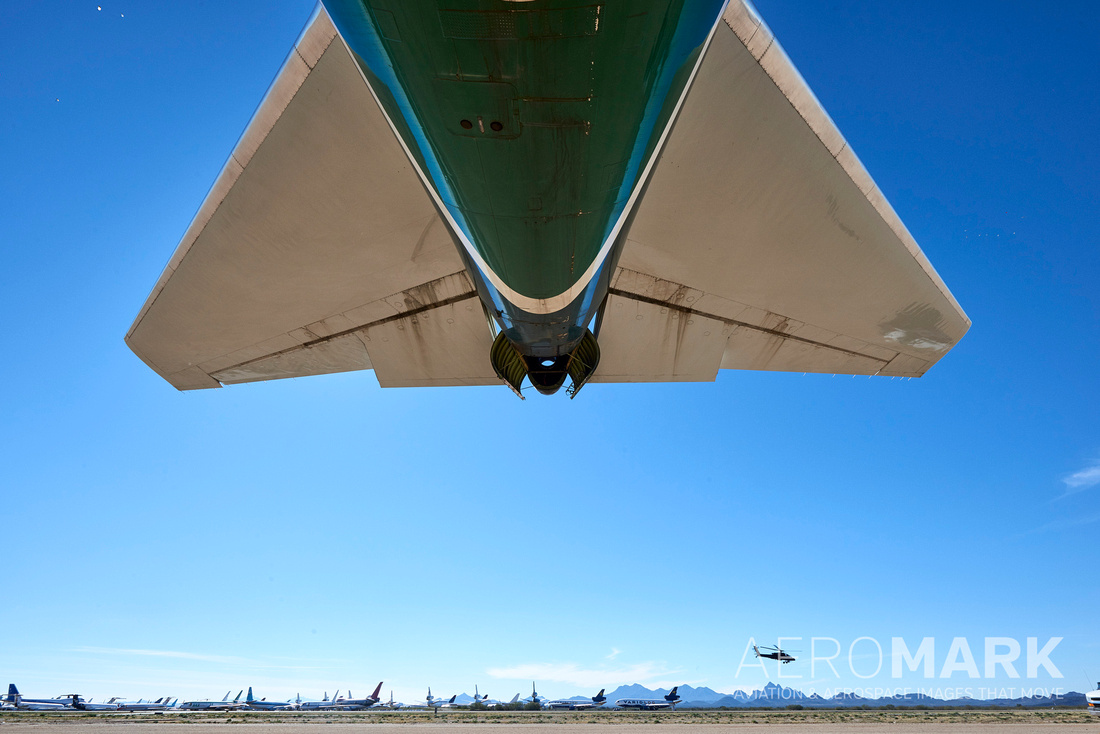 Perhaps it's not obvious, but for this shot I've positioned myself on the ground under what, in the preceding image, is that nearest 747. A truly unusual view of this "Queen of the Skies" draws your eye into the frame, and the aircraft on the horizon fill out the story. Plus, bonus, I captured an Apache helicopter headed to the Army National Guard heliport on the same airport and, though too small to recognize, those are parachutists under canopy in the upper left — and, for the truly eagle-eyed, on the right side, more parachutists strung out above the tip of the leading edge of the horizontal stabilizer. Whew! So much to see. 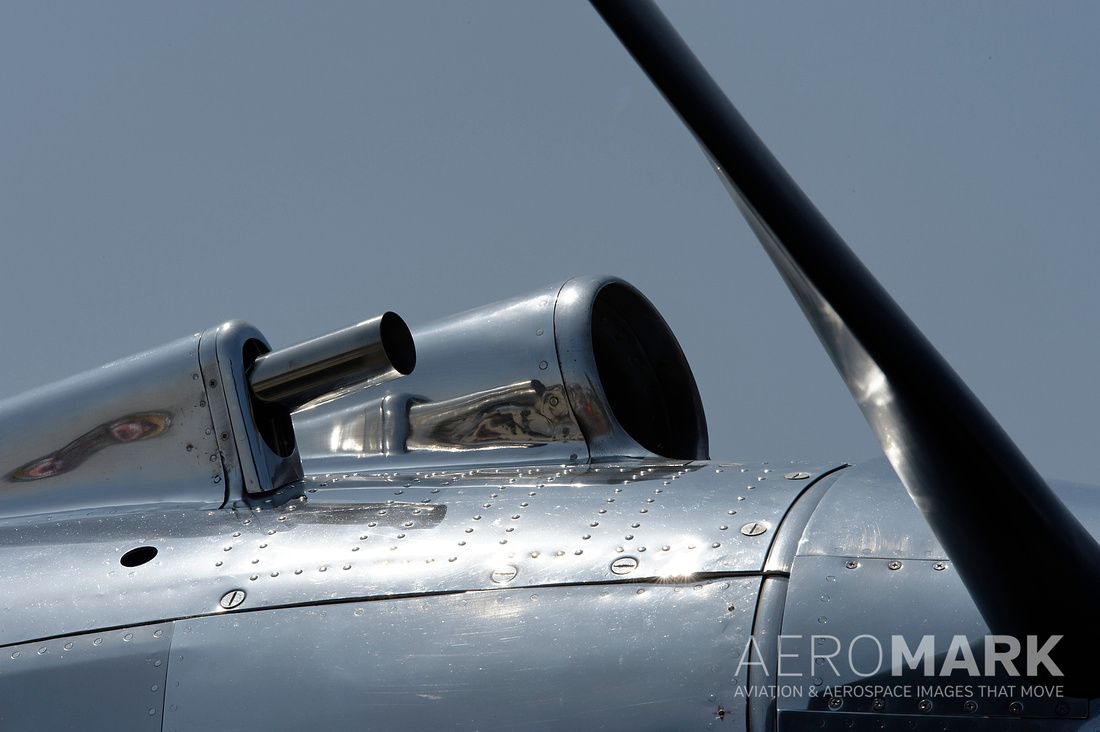 At the Planes of Fame Air Show in Chino there are planes galore — and they're famous! It's great fun to wander and gawk, but for this shot I narrowed my composition to take in just part of an XP-40 Warhawk. I was intrigued by the shapes and textures and the polished aluminum skin. Not so interesting was the sky. So… 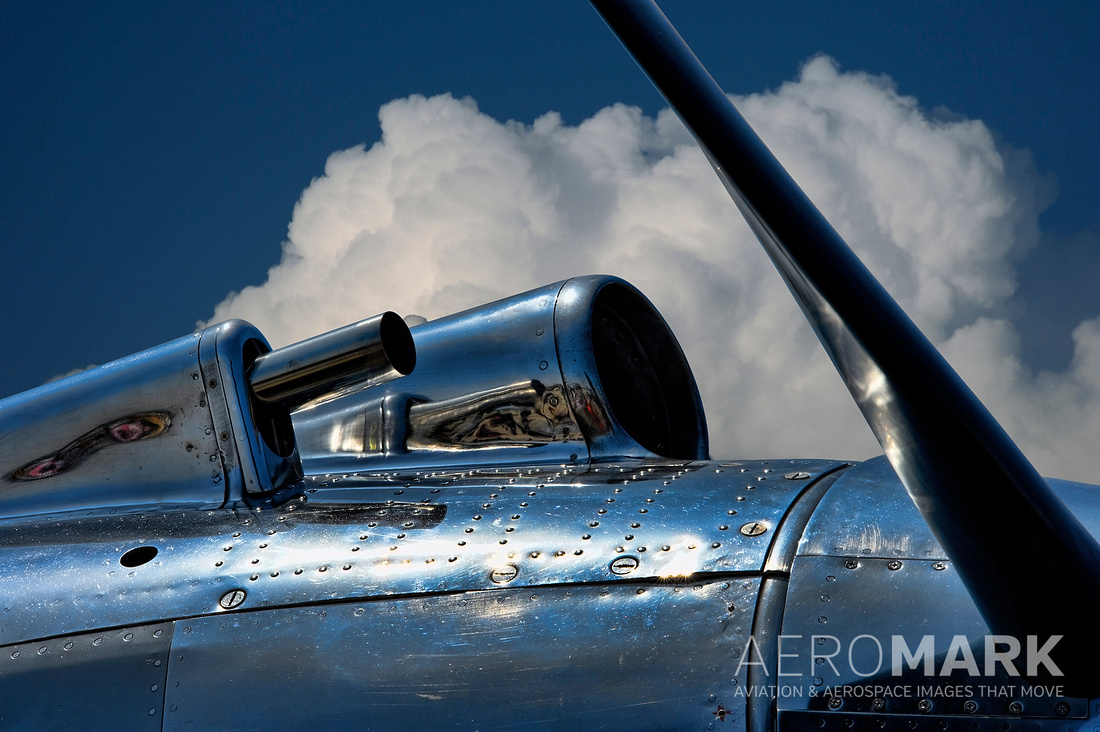 …I brought in a sky from elsewhere and exaggerated the aircraft's colors that were there but muted. Much, much better, yes? (I discuss skies in "The Sky's (Not) The Limit.") Finally, if you don't like adding skies, just wait for more interesting weather and then take your shot. Or, at least, when interesting weather arrives, take advantage of it. 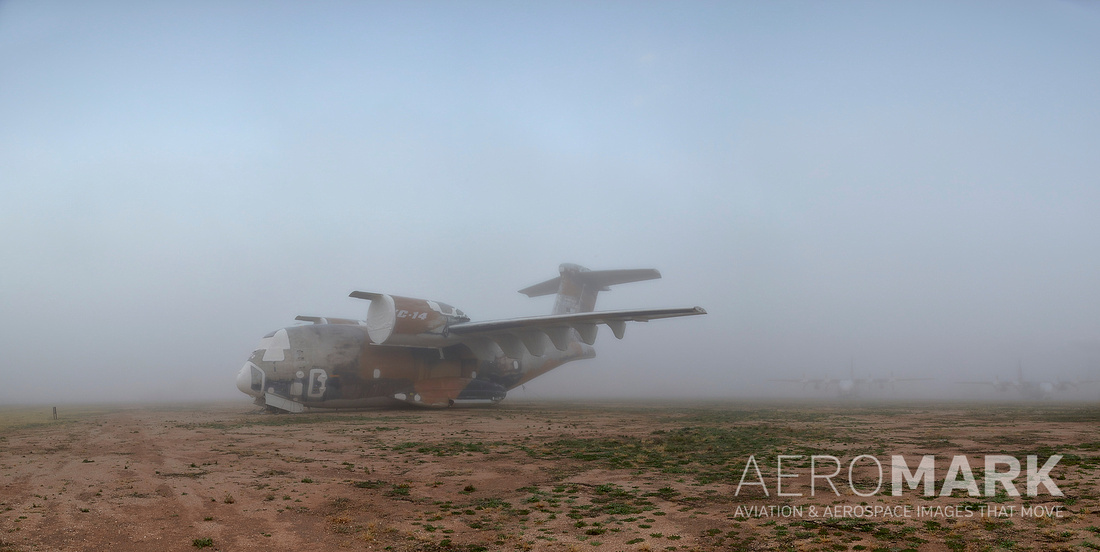 I arrived early one morning at the Air Power Reservoir (as it is now labeled by the Air Force) on Davis-Monthan AFB where I was greeted by fog. I was not there specifically for the Boeing YC-14, but when light gives you lemons, you make — in this case — lemonade in the form of a forlorn portrait of a long-cancelled program. And I made that lemonade using eight overlapping frames, stitched into a panorama, to include the C-130s in the foggy distance while keeping the foreground sharper and in higher contrast. All of that to emphasize the fogginess and the sadness of a very interesting airplane resting in a very uninteresting field. I left the YC-14 small in the frame, too, to diminish its impact, visually, thus piling on the feeling of abandonment.

When faced with a crowd of other aircraft (or it could be buildings or other, non-aviation, vehicles), consider how to either present the subject in a more interesting fashion or to isolate elements that can still tell the story. Be thoughtful with your camera settings and technique, keeping in mind that selective focus can be used when you must, or choose to, show those other aircraft. Be creative and, in all seriousness, have fun.