In this time of pandemic, with its new challenges and expectations, there are stories to tell not just about keeping our distance from one another, but also in spanning the distance between despair and hope. One such effort, to bring hope where it is desperately needed, takes flight nearly every week from a suburb of Phoenix, Arizona, to the heart of the Navajo Nation at Chinle, in the northeast corner of the state.

To give credit where it is due and, more importantly, share some ways that people can help, I will report on the who and the how and the why in an upcoming issue of ROTOR magazine. In the article below, I share the simple techniques I practiced to capture the images to illustrate that story.

The Navajo live on reserved lands covering most of northeastern Arizona, plus adjacent lands in Utah, Colorado, and New Mexico. High rates of poverty and, for many, primitive living conditions — no running water for washing, showers, or toilets, no electricity for heat or lighting — plus a culture that values family and community gatherings, have combined with limited access to healthcare to ravage the population with COVID-19. In their efforts to reduce the spread of the disease, the tribal government has been restricting travel to and from the reservation, but the resurgence of the disease across the country in November led to a total lockdown, with not even truckloads of supplies allowed in. 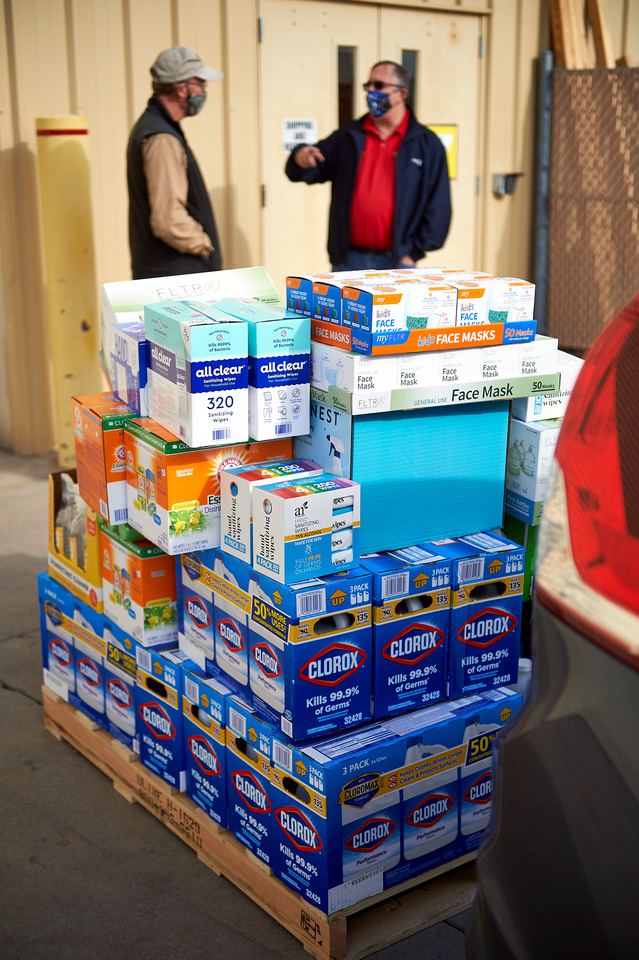 One small but important mode of transportation has been allowed to continue; MD Helicopters, in the Phoenix suburb of Mesa, began shuttling supplies to the reservation on a near-weekly basis during the summer of 2020, and continued to do so even during the strictest lockdown. (If the mode of their shuttling need mentioning, it is by helicopter.) These efforts are conducted through the auspices of Native American Sustainability for Veterans and Those in Uniform (NASVU)*, and most weeks the cargo consists of personal protective equipment and cleaning supplies, though in the first flights it included chainsaws (for cutting firewood). 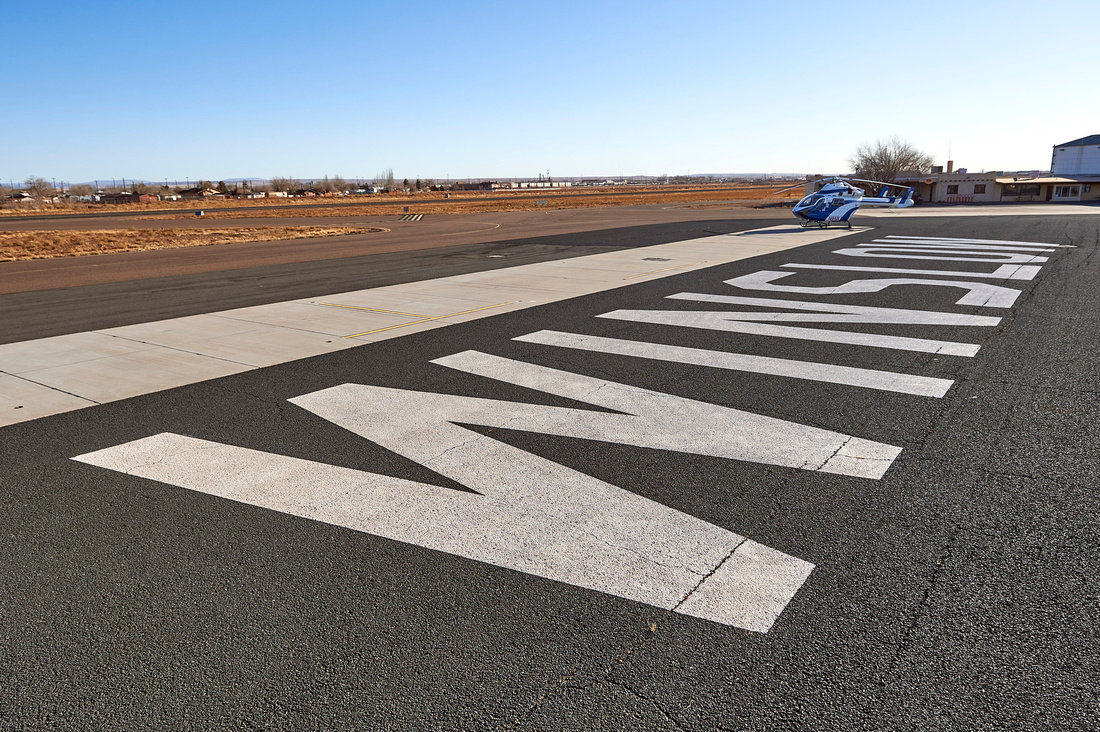 I've been on site with MDHI quite a bit lately, as I'm producing a video for them, and noticed some stickers on the side of one of their aircraft denoting flights to Chinle. I asked about these markings and learned of this continuing effort. "Can I fly with you to capture the images to support a story?" "Absolutely," was the answer, and it happened within days.

Keeping in mind the need for distancing, I made a couple of choices in photographing the activities.

Both of the above photos were made using a wide-angle lens, with which I captured elements both near and far. On top we see about $2,000 worth of supplies, purchased in the Phoenix area with donations, and in the second image we see "WINSLOW" painted on the ramp at the FBO and, where the concrete strip ends, the MD 902 Explorer in which most of the supply runs are made. Supplies and people, aircraft and location.** Each time the story is illustrated more fully than if I had excluded all but a single feature. Notice too, for the wide-angle to be effective in these situations, I have to be fairly close to one of the elements, a closeness that should be minimized or eliminated with people during these times.

But what about at Chinle, where the aircraft was to be swarmed with eager hands to unload the load? Well, the swarm turned out to be three people, and I made sure to be away from the aircraft when they approached it. What we did was: the pilot called Chinle from Winslow and told the folks there to expect the aircraft to land, I would deplane (dehelo?), and after I was away from both them and the aircraft, the pilot would actually depart, only to return immediately. This allowed me to get an "arrival" shot. We see that below. 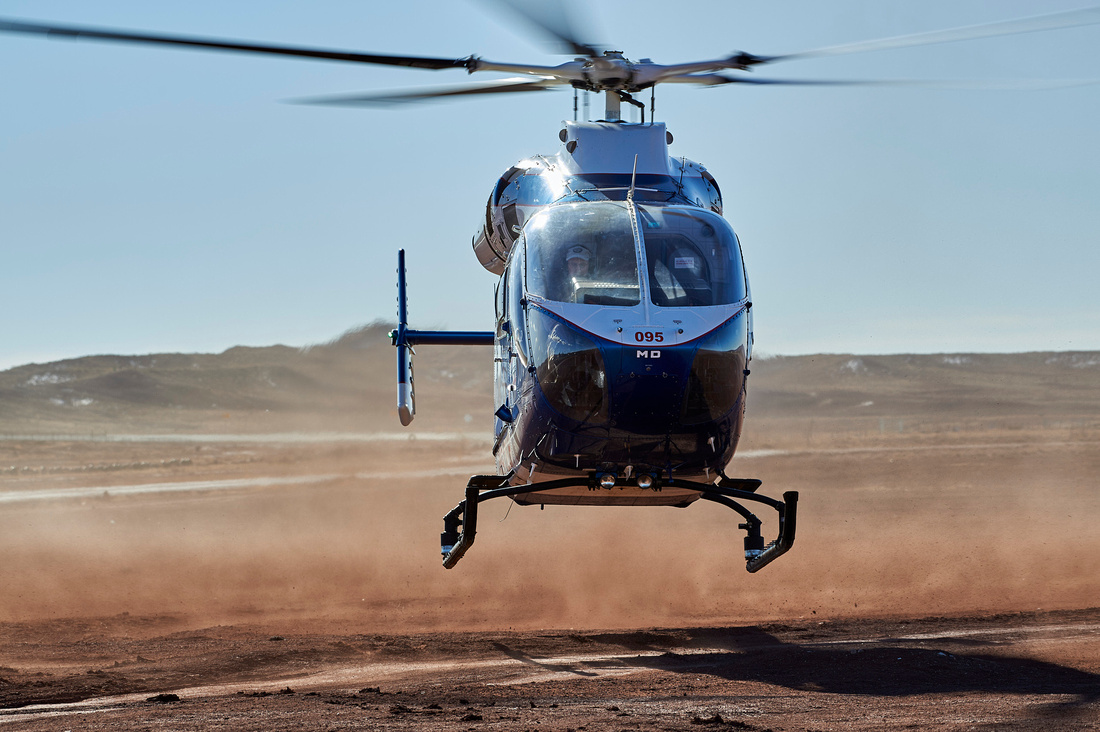 What you will notice, too, is that I am not standing near the aircraft with a wide-angle lens. I'm no dummy — those things throw up a lot of dirt 'n' stuff. Since the supplies are delivered to an open field adjacent to a church, to get a clean shot I'm using a narrow-angle, AKA "long," lens and standing a good 100 feet away. Yes, in this case the long lens is serving the concept of "distance" not for COVID safety, but for sticks-and-stones safety. 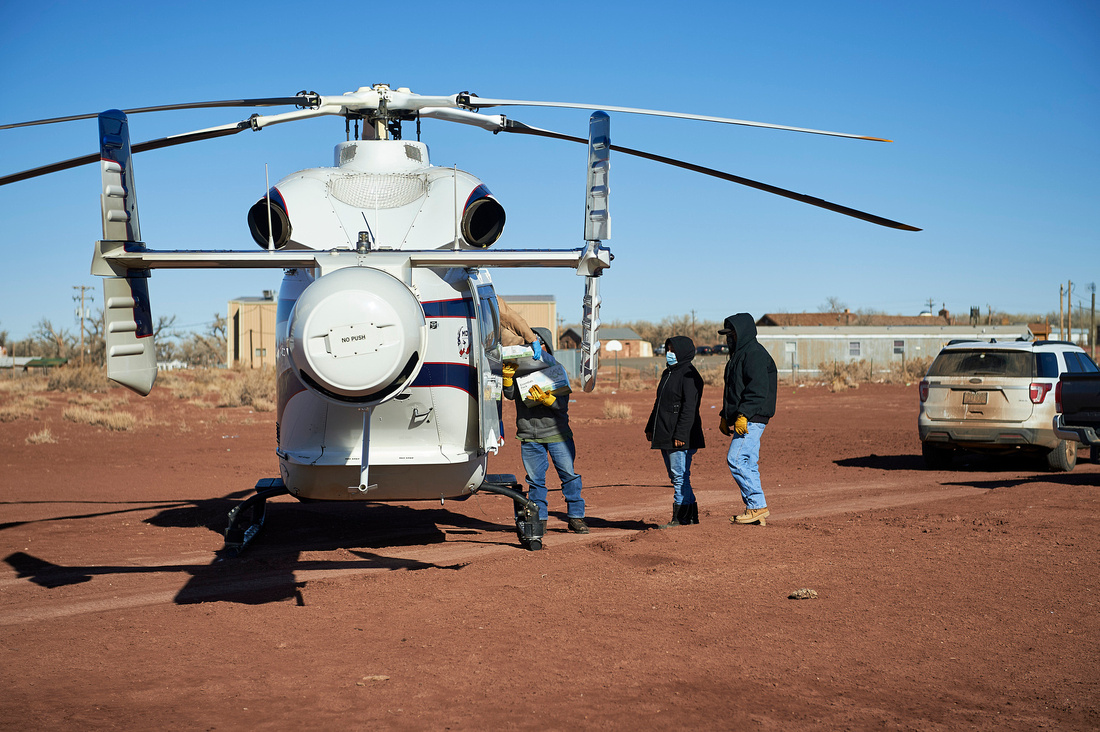 I moved around and around the aircraft as they unloaded, mostly staying 20 feet or more away. The image above was shot with a lens that fairly reflects how our eyes "see," and I used that to show a breadth of elements — aircraft, people, vehicles, dirt field, buildings — putting the people and equipment in context. 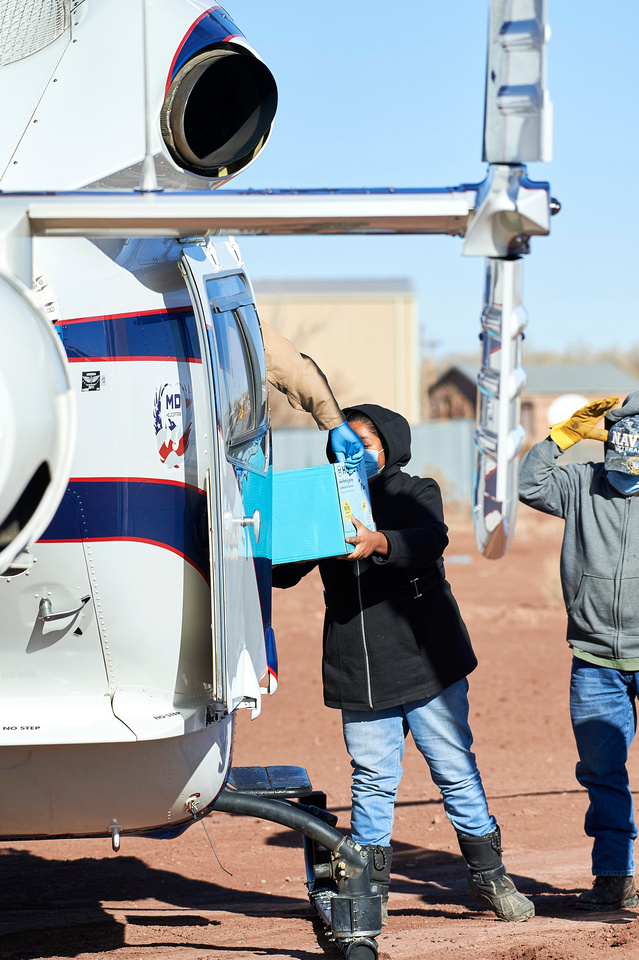 Then, remaining where I was standing, but switching back to my long lens, I isolate the efforts. Both approaches work, and shooting both ensures the right image will exist to support the words as might be written. 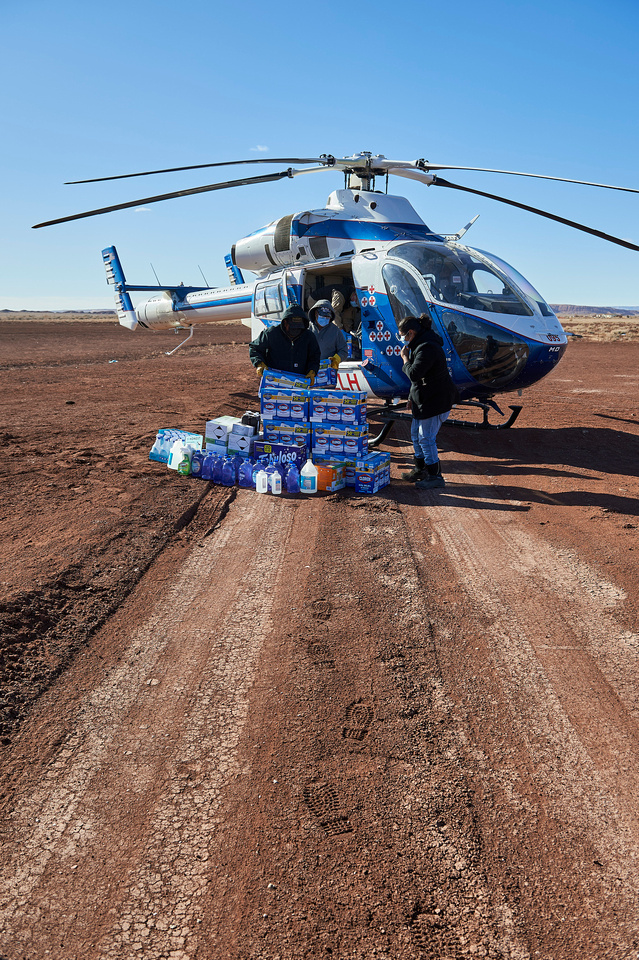 Moving farther around, and again with a wider-angle lens, the dirt road and the footprints lead our eye to the subject, as the road also suggests transportation away from the aircraft. It is a simple photo that tells a nuanced story. 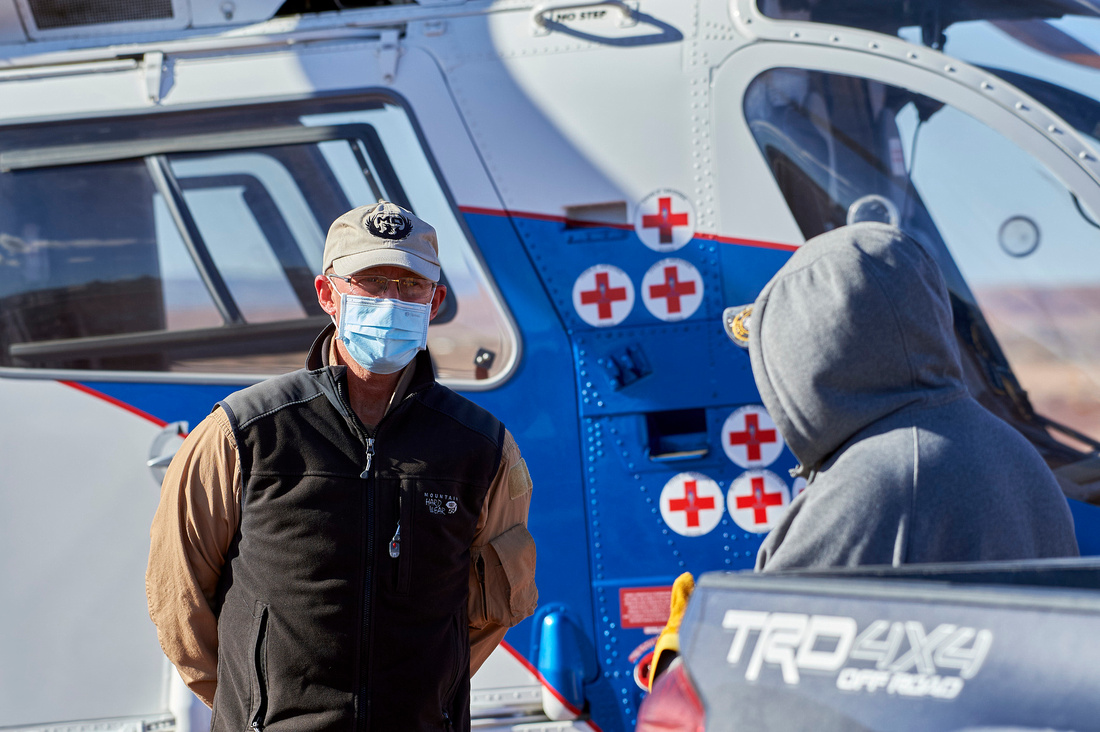 With the supplies all transferred, the pilot chatted for just a couple of minutes with the folks on the ground. Notice that I've moved to yet another location, another angle on the activities, and have gone back to the long lens, which means I've also backed away from the people. The pilot is the obvious subject, but he is speaking with someone we can see, and the aircraft — and the stickers commemorating each of such assistance flights — are noticeable though out of focus. 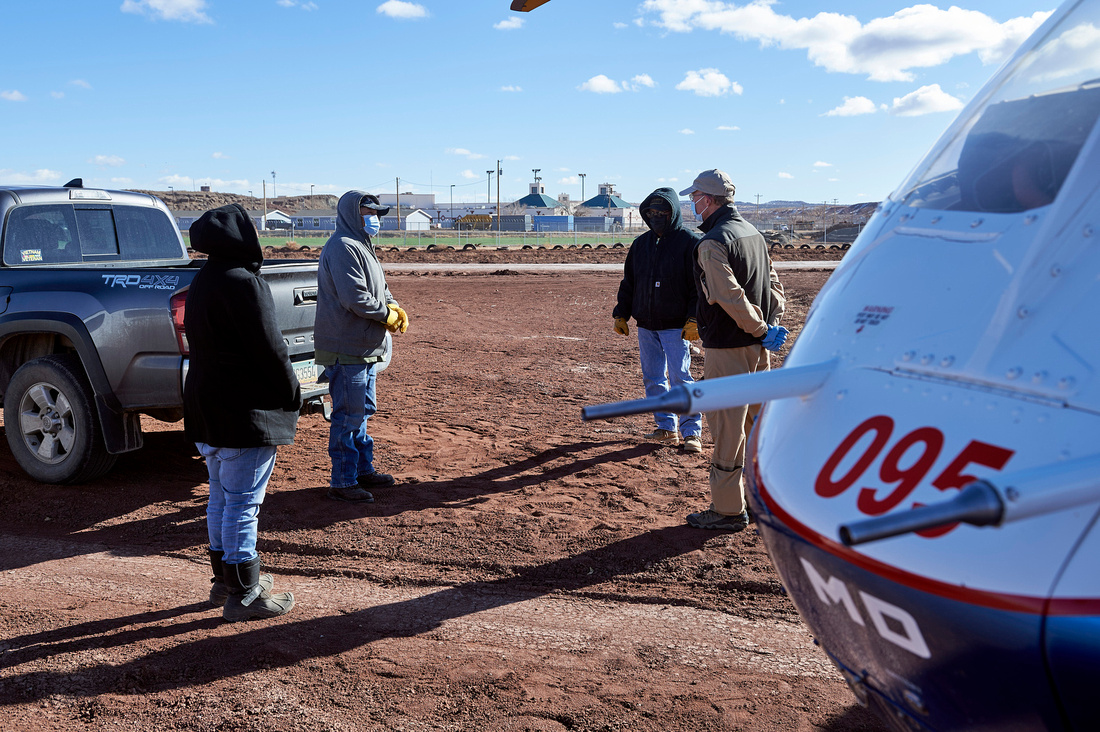 Around to the other side of the group and, now, the wide-angle lens.

I never got much closer than this, never actually spoke to anyone, and I was always masked. It's kind of sad, missing that personal interaction, but the safety of the members of the Navajo Nation was paramount, so I did what was necessary to respect that, while also making the images that tell this one small story of hope delivered.

Such a personal story, people helping people, often benefits from a wide-angle lens used close to the action. (I'm thinking of writing about that in an upcoming article, actually.) Since physical closeness poses extra risks during a pandemic, I used the wide-angle lens from a greater distance than normal, but composed with other elements of the scene to tell more of the story.

Take the image just above, with the pilot standing (distanced) with the three folks from the reservation. If I had not included the nose of the helicopter, using a wide-angle lens, it would be a photo of four people standing. Yes truck, and yes buildings in the background, but such an image would require more text to explain the situation.

And notice what is in focus in that image — the people in the midground. (The background is actually not in focus, though it is hard to tell in this low-resolution image.) What is obviously not in focus is the helicopter in the foreground. Why? Because the "meeting" is the story, so I kept the helo for context, but focused on what's important. Compare that to the very first photo, way above. There, the midground supplies are in focus, while the background people are not. The meeting of those two men is communicated, but the supplies take center stage.

And don't forget your narrow-angle lens. As with the woman being handed a box from inside the helicopter, which I shot from behind the aircraft. It tells us to look at just one thing: that action. A long lens can also visually connect elements that are not necessarily near each other by bringing the background "closer" to the action, seen when the helicopter is arriving or when the pilot is framed against the aircraft while speaking.

This type of imagery could be destined for a company newsletter, social media, an annual report or, in this case, a trade magazine. You need a range of images to support those media, so if you use your equipment and use your feet, much of the story can be told without a word.

To Learn More or Help Out

In addition to NAVSU, help is coming to Native Americans through other channels, including the Native American Relief for Humanity Coalition, of which the Barry & Peggy Goldwater Foundation, led by granddaughter Alison Goldwater Ross, is a part. You can learn more about them at http://goldwaterfoundation.org, and if you choose to make a donation through them, they ask that you designate it for Native American Relief.

* That single asterisk, way above, is there because, at the time of this writing, NAVSU is still awaiting its 503(c)(3) certification, so fundraising is being handled by the Veterans Medical Leadership Council Charities. You can learn more about them, and find out how you can help, at https://www.arizonavmlc.org.

** The double-asterisk is just to note that this is, indeed, the Winslow, Arizona, where Jackson Browne declared to have witnessed a fine sight to see, while standing on a corner. Whichever corner he might have meant, there is now a corner in town with a statue of him, and a statue of his co-writer, Glen Frey. You will, however, have to bring your own "girl, my Lord."

Thanks go out to MD Helicopters for allowing me to accompany their pilot, Bob Rappoport, on this trip. It's a great service the company is providing, which involves about 4 hours of flying, plus two fuel stops, and a mere 15 minutes of transferring the supplies from the aircraft to the waiting hands on the ground.

Frank Tucker(non-registered)
Nicely done.
No comments posted.
Loading...
Subscribe
RSS
Recent Posts
The Frog in Your Hand From One, Many Too Many and Not Enough Background Players Opening Wide Up up up Not So Show-y Shooting the Hero The Long and Short of It Move Close and Say Aaah
Keywords
photography aviation technique composition helicopter airplane aerospace background focus Arizona
Archive
January February March April May June July August September October November December
Unless marked otherwise, all images are copyright © by Mark Bennett, all rights reserved.
User Agreement
Cancel
Continue