A short story that illustrates how thinking ahead and showing your work can help you and your client when the time is suddenly right. Let me explain. (I'll also show some images, in the order they were captured, so you'll see how I made it to the final one.)

I contribute to a major helicopter trade magazine and, by my nature, think about ways to improve not just what I do, but what they offer to their readers. One idea came to me about making the last page, facing the inside back cover, something that readers would seek out. I envisioned the content to be visually interesting without a lot of verbiage. Just a little dessert at the end of the magazine's main course. 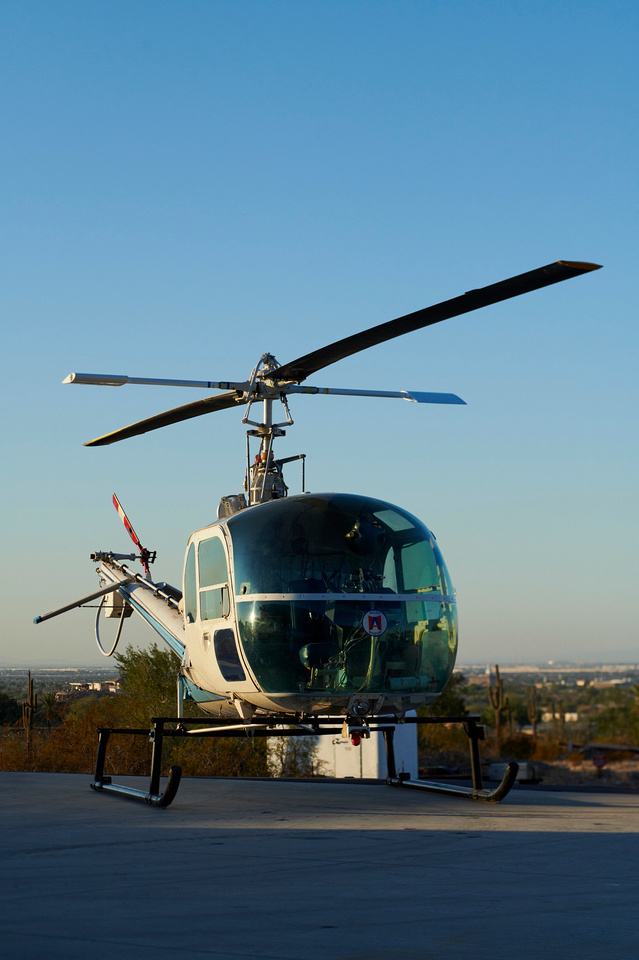 The Hiller UH-12E4/5 as we positioned it just before sundown. The shadow of a shipping container, out of frame on the left, is just moving up the landing gear. That white trailer in the background was a challenge, and required careful compositing to avoid.

The magazine editor was supportive of this idea, especially when we landed on making the image about a small operator. The next two issues had their last pages already planned out, so we would wait to implement this new feature. Fine.

Unrelated to that idea, I had previously been asked by the editor about photographing helicopters using lighting techniques for really stunning "portraits" of aircraft. I was actually already considering the same pursuit, so our desires melded perfectly and I combined the portrait approach with the idea of that last page feature. Since the next two issues already had last-page content scheduled, I would have time to work on both aspects of the new feature, which I called LastLook. 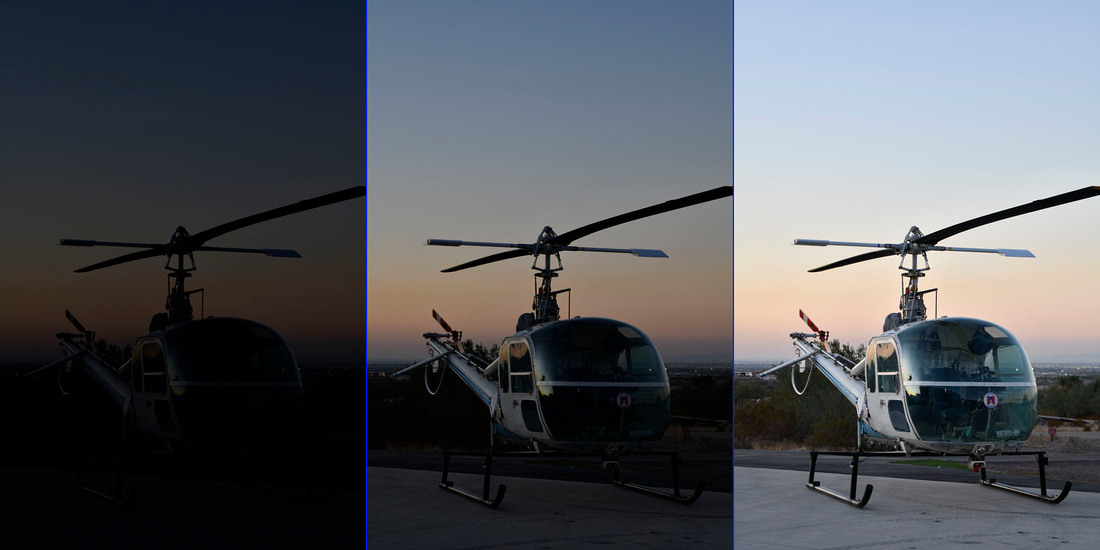 These three frames illustrate a technique called high dynamic range (HDR) photography, which I would be using for the final image. Three images are captured, at prescribed exposure levels, and the images would later be merged using specialized software. (You can read more about HDR here and here.) 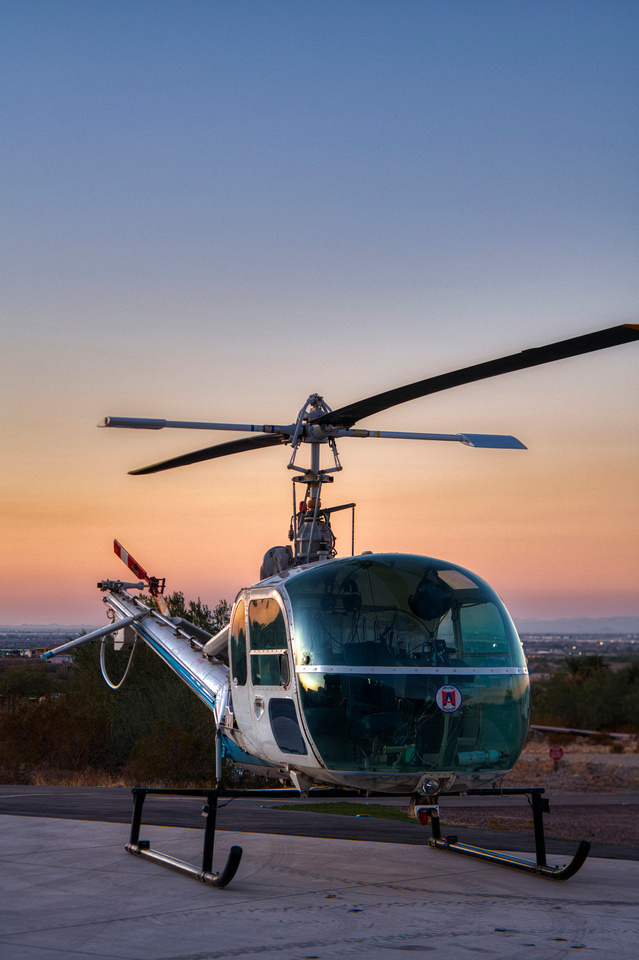 This is the image that resulted from combining the three previous ones. Much better, but something was still missing. Note, too, that a change in camera position has hidden the white trailer behind the aircraft.

By chance, at the annual picnic of an aviation group I volunteer with, I met a man with an interesting helicopter and asked him if I could use his aircraft for a trial run of a "portrait." He agreed and we set a date and time — that being about 90 minutes before sundown. This would allow enough time to prepare and place the aircraft, then place it a little bit to the right. No, back to the left and at a greater angle. Well, now that I see it, a little less angle. Nope. Make it a little more. (The owner was very patient and accommodating, especially since the resultant image was not intended to appear in the magazine.) 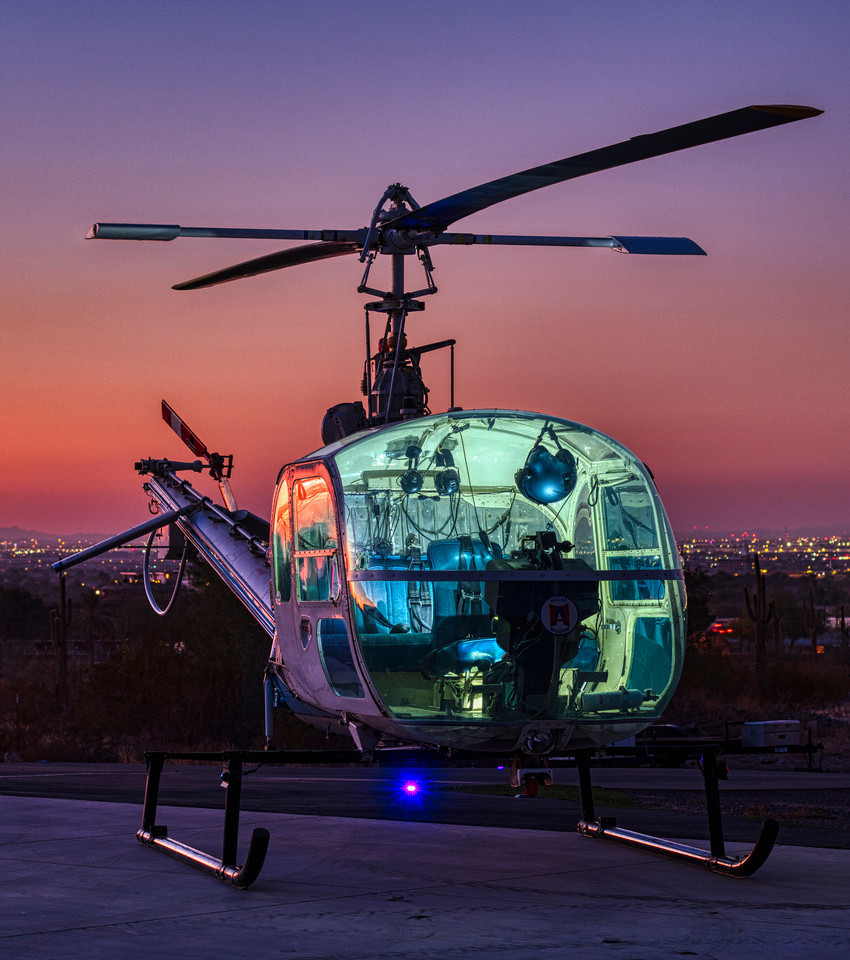 Michael TragarzÕs Hiller on the ramp at his home.

What was missing, besides waiting a few more minutes for the sky to go gorgeous, and repositioning to keep all of the main rotor blade in frame, was light inside the cockpit. I positioned four separate lights to illuminate the interior, which combined with HDR to really punch things up!

I'll admit that "masterpiece" might be an overstatement, but the final image is pretty sweet, right?

Plus, I sent not just the image to the editor, but an idea for how such an image would work on that final page, complete with the magazine's standard footer elements and a caption. When I called to discuss, the editor had not yet viewed the art, which was great because when she did, her response was "wow!" And I know she meant it.

What happened just a day or two later wraps up the story.

The content that had been planned for the last page of the next issue, due to go to press one day hence, was suddenly pulled and they needed a replacement. Well, the editor had a replacement in hand — this photo and a page designed to show it off!